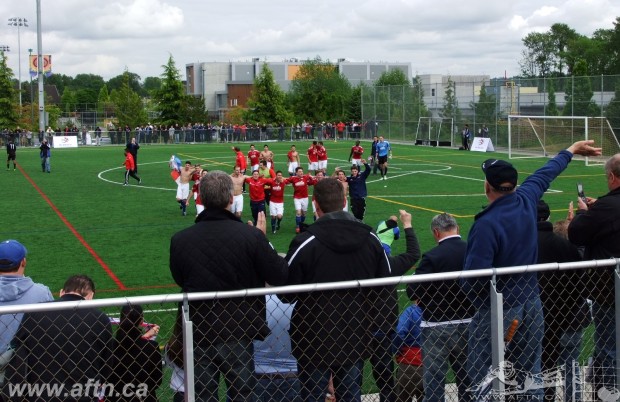 The Burnaby Lake sports complex embodies all of the romance that is youth football in suburban Vancouver on a February evening. Squall lines of grey rain-laden wind lashing over the ridge. A bleak view of the Trans-Canada highway partially hidden by a few alders trying gamely to be a proper forest. Rubber turf pellets flying every which way from a field covered in more lines than Pablo Escobar’s dining room table. An aluminium bleacher surrounded by a chain link fence. Surprisingly good coffee at the concession stand.

The bleacher and the coffee is what makes Burnaby Lake a top venue when you’re watching your son compete in a U16 Cup Final.

It was cold. It was wet. Umbrellas were a futile hedge against the weather, more trouble than they were worth. Down below us on the pitch our West Vancouver SC Strikers were trying just as hard to play long balls against a 20mph headwind, forgetting that what got them here was their play on the deck. But who could blame them? It was not a day for a tiki taka constitutional of a Mediterranean evening. It was more like Grimsby on a BT Sport Monday night, under the cold lights, bitter that the scheduling had awarded us a time slot when every reasonable person was at home tucking into a proper dinner.

So when we found ourselves heading to penalties with the score tied at 1-1, thanks to a lovely goal and a harsh handball, the 25 or so of us who had been hollering out “Come on West Van!” and “Let’s go Blue!” took well to an offering that rose up from my gut:

And wouldn’t you know it? The smattering of parents from West Vancouver and Bowen Island were singing together. Singing for our sons. Singing for their brilliant undefeated season to end with silverware against their fiercest rivals. We had gone the full match sticking to our own youth football code about never talking about another team’s player, and here we were looking to lift these boys with something different. And “Victory” was it.

If I had only known that all this time, the parents wanted to sing, I would have embarrassed my son much earlier in the season. Ambleside would have become as much a fortress along the fence rail as it was between the lines.

This is where it begins. This is why it is called support. There are moments when the occasion calls for it, and the instinct is irrepressible. Even in a culture like ours, where singing in public is NOT A THING, this was the moment.

It’s not a performance, it’s an honest expression, a true sentiment. Support is about love and affection for your team, for the players and for your comrades with whom you stand shoulder to shoulder. It’s about local pride in where you live, and where you come from. It is about honouring the connections you have to each other.

And it’s not hockey-parent shitlarking of your own players, or tearing down a volunteer referee or calling for cards against the other team’s 16-year-old lumbering centre back. It’s about a positive lift for the ones that matter, your own son or daughter, or someone else’s son or daughter who plays for your team.

When you start paying attention to the instinct to loudly and visibly support, it starts to work on you. If you are a parent you have found it. If you aren’t you can taste it when you come to an MLS or USL match. We are not there to “make the best sporting atmosphere in Vancouver.” We are there because we can’t NOT be there. Because we know what it means to the players we love.

Supporter culture, ever so slowly, is becoming a thing, even beyond the Whitecaps. Last time, I wrote about the Barton St. Battalion in Hamilton awaiting their club to be born. In the last couple of weeks I have been made aware of a little experiment happening on Vancouver’s West Side, where a small group of supporters have created the Umbrella Ultras of Vancouver United to test out the idea that local football clubs in the Lower Mainland can be supported by people proud of their neighbourhood and their local team. Vancouver United’s adult teams (male and female) play city-wide, with the men playing in the VMSL and, in the summer months, the PCSL.

For Whitecaps supporters, March 6th is coming, and this sentiment is going to be on mass display on Sunday. Supporters’ group members have been hard at work preparing for the day. Marius Røvde, our beloved goalkeeping coach, has called for our support to be gauged against the benchmark set during the last two home games of 2015, when the tarps were lifted and he gifted us all with a new chant.

Get there early. This year must be the season that we break the Vancouver tradition of getting to your seat just after the national anthems are finished. If you are in the Southside, sing during warm up, grab a flag, welcome others in. If you are elsewhere be there to call out our starting eleven, and be part of 25,000 voices singing “White is the Colour” and “Oh Canada.”

Offer your support for the players, for our team, for our city. You’ll feel it. Even if you’re not in the Southside, you’ll find yourself clapping, singing, standing once or twice on a corner or a free kick, getting behind us in a winning position or lifting the team out of a deficit.

And if you stay through the end, you’ll see what it means to our players. They will return the energy with a lap of acknowledgement no matter what the result. Faithfulness does not go unnoticed and it has a real, tangible effect when we get it right.

That’s true whether we are at BC Place for a season opener, or heading to penalties to decide a youth Cup Final on a wet Sunday night in Burnaby.

The Vancouver Southsiders are hosting a pre-season sign up event at the Belmont Bar below Doolin’s starting at 6pm on Friday March 4th. Stop by after work to join up or renew your membership. Meet folks, learn how you can participate in designing and deploying visual displays, and become a part of the heart of supporter culture in Vancouver.