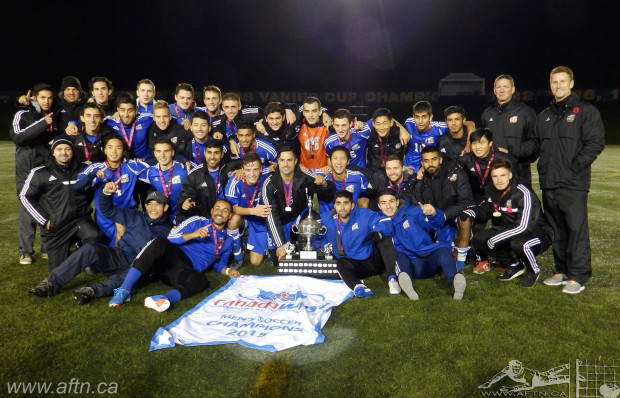 Football is booming in British Columbia this year.

Vancouver Whitecaps are flying high in MLS, the SFU Clan had a strong season that may see them return to postseason NCAA action and the Pacific Division dominated in Canada West men’s college soccer this season.

Four British Columbian teams made the semi-finals of this year’s Canada West championship, but in the end it was that familiar powerhouse of the UBC Thunderbirds that lifted the trophy on home turf on Saturday night.

It’s been a fantastic season for BC universities in CIS men’s soccer in 2015 and the Thunderbirds will now look to cap it off by claiming their third national title in four years in Toronto next week.

That set up Friday night’s semi-final match ups at Thunderbird Stadium, with the second ranked Vikes advancing with a late 2-1 win over the Spartans and the Thunderbirds hitting three unanswered second half goals to see off the Cascades 3-0.

Saturday night’s final was played in the rain but that couldn’t stop the Thunderbird juggernaut from lifting another trophy. But they were made to work extremely hard for their latest title.

UVic shocked their hosts when former Whitecaps PDL player Cam Hundal poked the ball home after a goalmouth scramble in the 16th minute. It was lead Victoria held till half time, where they changed nearly their entire team at the break.

A strange move, which allowed UBC to tie things up just four minutes into the second half when Milad Mehrabi buried a Gagan Dosanjh cross.

UBC pressed like crazy for the go ahead goal but despite a number of very close calls, including one header that seemed to be cleared from behind the goalline, neither team could break the deadlock and the game headed into extra time.

The Thunderbirds took just six minutes of the extra period to grab the lead for the first time in the match when Whitecaps’ USL player Chris Serban finished off a streaking run to chip the ball into the UVic net.

It was to be a lead that UBC never gave up and with no further goals, UBC lifted their 16th Canada West title with a 2-1 victory.

With the nationals now coming up in just five short days time, getting such a tough test in a match is the perfect preparation for facing Canada’s best college sides and despite going down a goal, UBC head coach had no doubts that his talented team would respond.

“There’s a positive to take from it. There were no concerns, so to speak. We felt confident that it would come. There’s fatigue. The boys were tired. It was not an easy game yesterday [in their semi-final against Fraser Valley].

“Both teams are conserving players a little bit [for the nationals] having played yesterday. But you still want to go and lift a trophy at the end of the day, so we’re very happy about that.”

It’s been another phenomenal season for UBC and it’s not over yet. The Thunderbirds are certainly used to success and this year will be up there with their best if they can add a 14th CIS Championship next weekend. You have to fancy their chances.

UBC head to York University for next week’s finals unbeaten after their Canada West campaign. It’s the second time in the last four years that the Thunderbirds have gone unbeaten and they’re the only team across Canada to remain so. Last time they achieved that feat, they brought home the CIS Championship in 2012.

The Thunderbirds finished the regular season with 10 wins and 2 draws from their 12 divisional matches. They only conceded a staggering five goals, banging in 31 at the other end in the process.

Former Ottawa Fury keeper Chad Bush joined UBC in the summer. Bush has responded in that faith with eight clean sheets during the regular season, including six in a row to kick off October.

He added a further two in postseason play and it’s no surprise that performance saw him pick up Canada West All Star honours, along with five of his teammates (Gagan Dosanjh, Sean Einarsson, Bryan Fong, Harry Lakhan and current WFC2 player Chris Serban).

Mosher picked up Coach of the Year, for the second time in three seasons and the third time in total.

Former Whitecaps PDL player Einarsson led the scoring charts, with 9 goals and 2 assists (playoffs included). Dosanjh, another former Whitecap, led the team with 5 assists, adding 7 goals to the Thunderbirds tally as well. Thirteen UBC players have found the back of the net over the season so far.

Dosanjh returned to UBC this year for a second stint, after a spell in the pro ranks with FC Edmonton was cut short through injury. The talented midfielder will hope to add to his 2012 CIS Championship MVP award when he heads east next week.

Both UBC and Victoria now head to York University in Toronto for the CIS Championship, which gets underway on Thursday. UBC are ranked number one in the country and they’ll be confident of bring the championship back to Vancouver for a 14th time.

We’ll have coverage of both the Men’s and Women’s CIS Championships on AFTN.

Next week will also see our second “Thunderbirds Week” on AFTN in the build-up to and during the CIS Championship. On Monday we’ll have more of our chat with UBC head coach Mike Mosher. Tuesday sees us talk to the man who grabbed the winning goal on Saturday, Chris Serban, about his second season with the Thunderbirds and what he learned playing in the USL with the ‘Caps this year. We’ll chat with goalkeeper Chad Bush on Wednesday, before our nationals coverage gets underway from Thursday.

So watch out for all of that. In the meantime, congratulations to UBC on another triumph. Let’s hope they come back from Toronto in a week’s time with another national title to add to it.