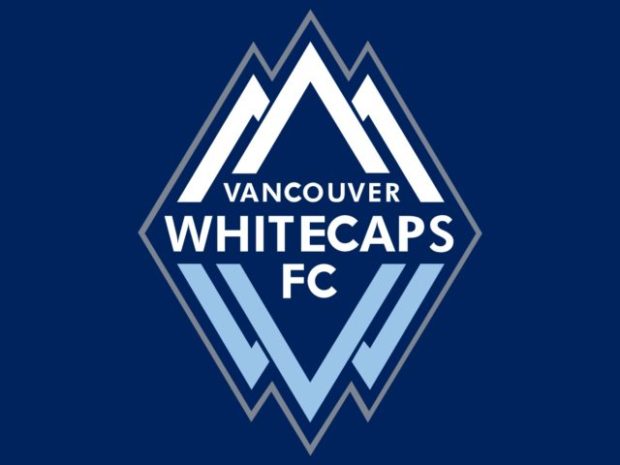 We continue our breakdowns of some of the squads for the upcoming League1 BC season with the second part of our look at the Vancouver Whitecaps U19 men’s team.

We kick things off at the back in part one with the goalkeepers and defenders on the squad. This time around it’s the midfielders and forwards.

With a number of the U19 side moving into the U23 program and now WFC2 in recent years, this is going to be quite a young Whitecaps L1BC squad, the youngest in the league, but these matches will invariably prove to be a fantastic opportunity for the guys and a key step in their pathway through the game, whether here in Vancouver or beyond.

VICTOR AKOUM 18-year-old midfielder Victor Akoum joined the Whitecaps academy in 2019, heading west from Edmonton to play with the U17 team after impressing in a HPP Combine for Alberta and BC players.

The left footer can play defensively as a centre back and full back, but has been getting utilised in a defensive midfield role with the Whitecaps. He played this past winter season with the ‘Caps U19s in the FVSL, scoring one goal.

Prior to the Whitecaps, Akoum played his football with Edmonton Scottish, for both the men’s and the U17 teams and the BTB Academy, and is a two-time provincial champion. He’s also been involved with Canadian national team camps at U15 and U17 level.

WILL ANTONIUK – Having previously been a part of the Whitecaps Alberta Academy Centre in Calgary, midfielder Will Antoniuk made the move west to join the Whitecaps MLS Academy in August 2020. In Alberta, Antoniuk was playing at the higher U16 age group as a 2004 player amongst 2002 and 2003 teammates.

The 17-year-old attacking midfielder came through the Calgary Blizzard youth program, going over to England in the summer of 2017 for a training stint and some matches with Wigan Athletic U14s alongside Finn Linder, who is currently on the WFC2 squad along with Will’s brother Owen, who has been with the Whitecaps MLS academy since 2018.

Antonuik played this past winter season in the FVSL Premier with the Whitecaps U19 side, where he scored two goals, one in the league and one in the Soccer City Cup. 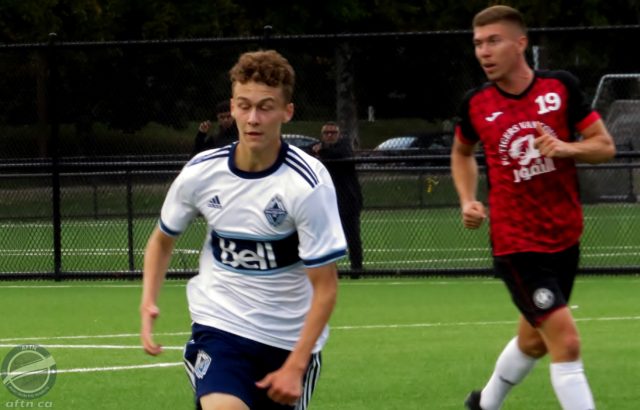 Quite a recent addition to the Whitecaps program, 17-year-old Chad Baker joined the MLS academy last year after playing his football with Mountain United in the BCSPL and in the Coquitlam Metro Ford program before that.

The Coquitlam native is an attacking midfielder and is another player who played this past winter season in the FVSL Premier with the Whitecaps U19 side, where he scored two goals, both in the league. 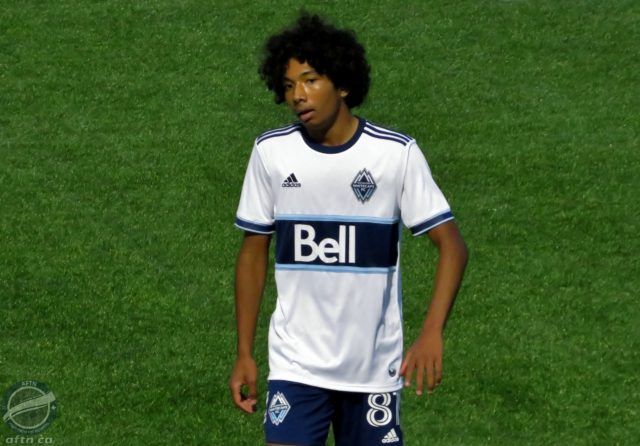 Nikos Clarke-Tosczak joined the Whitecaps Academy in August 2020, after a youth career that saw him play for Warriors FC and the Green and Gold Academy in his native Edmonton and over in Switzerland with FC Lugano in their 2019/20 youth league season.

The 18-year-old can play as a left back, a left wing back, and a left midfielder, and it’s likely to be one of the latter positions that we’ll see him utilised in L1BC. He played this past winter season in the FVSL Premier with the ‘Caps U19s, scoring two league goals. 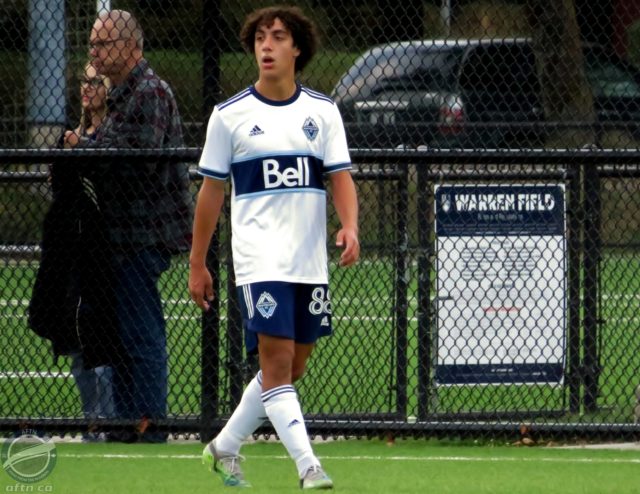 Alesandro Comita has been with the Whitecaps MLS Academy since January 2019, after making the move west from the Whitecaps Kamloops Academy Centre. Prior to coming into the Whitecaps system, Comita played with Thompson Okanagan in the BCSPL.

Starting with the ‘Caps U15 side that first season, Comita, a midfielder with an attacking edge, has been moving up the age groups and scored four goals for the Whitecaps U19s in the recent FVSL Premier season, three in the league and one in the cup.

The 17-year-old’s brother Domenico will also be playing in L1BC this season, but with the Kamloops based Rivers FC. 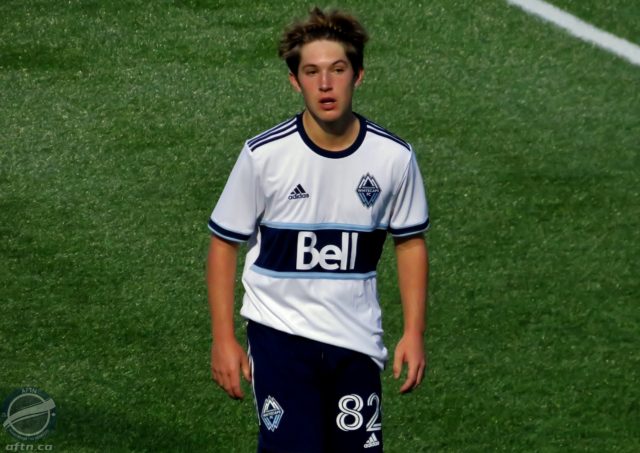 Fuerst can play as a central or defensive midfielder, with his strengths being his calmess on the bal, his protection of the defence, and his distribution. Most of his time with U19s so far has seen him deployed in that number six role, from where he scored two goals in the recent FVSL season.

Another player to come through the Calgary Blizzard youth system, where he played primarily as a centre back, Fuerst made the move to Vancouver at the same time as his Blizzard teammates Will Antoniuk and Sydney Wathuta and they’ve been moving up the ranks together now in the Whitecaps system. He went on trial with Wigan Athletic in 2018.

Like Antoniuk, Fuerst was playing at the higher U16 age group at the Alberta Academy as a 2004 player amongst 2002 and 2003 teammates, and has been playing soccer since an early age, first with U4 Timbits soccer and then with the Rosedale Community team. He’s played with the Alberta provincial program, winning gold at the 2016 Summer Games and the 2019 Alberta Indoor Provincials.

Slotting into the U15 side in his first season before moving through the age groups, Kapila has been playing for the Whitecaps U19 side in the FVSL this past season, scoring two goals in the Premier Division.

His youth career saw him play for Regina United Impact, Team India, and FC Regina. The 19-year-old has been playing football since he was 2-years-old! 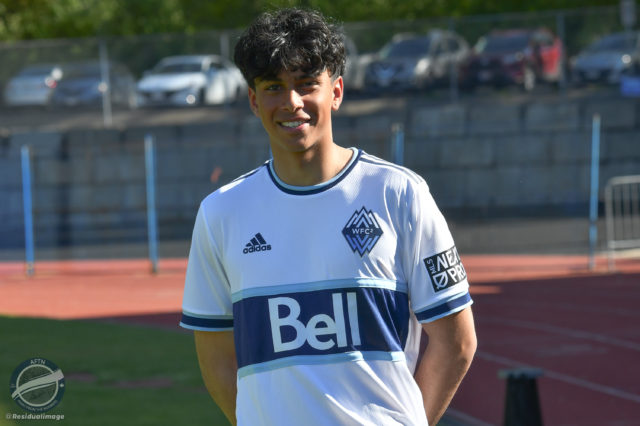 Another of the more recent additions to the Whitecaps MLS Academy, Joven Mann came into the ‘Caps program just last year, after impressing in the BCSPL with Surrey United.

Playing for the U19 team in the recent FVSL Premier season, Mann scored five goals for them this season, two in the league and three in the cup.

LUKE NORMAN – 18-year-old Luke Norman has been with the Whitecaps MLS Academy since August 2017, after playing his youth soccer with Fusion FC in the BCSPL.

Starting with the U14 team, Norman has moved through the age groups within the ‘Caps system and played the last FVSL Premier Division season with the U19s, scoring two goals in league play in November. 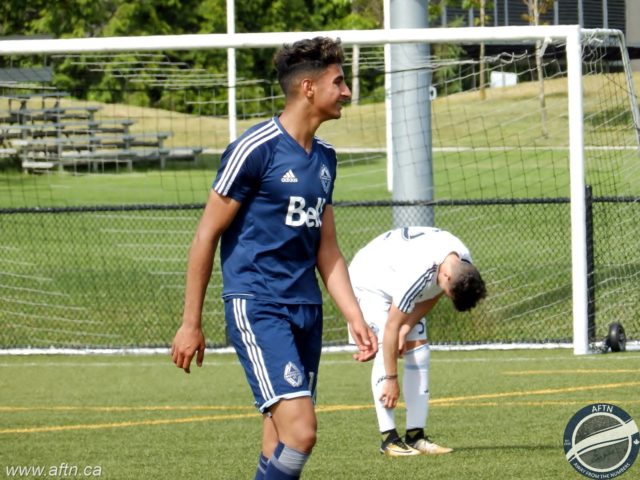 Midfielder Gurman Sangha is another Whitecaps Academy alumni. The 6 foot 1 Coquitlam native played his youth soccer with Mountain United in the BCSPL before joining the Whitecaps in August 2016.

Sangha made 36 appearances for the ‘Caps U16s in the 2016/17 USSDA season, starting all but one of those matches and scoring 11 goals and registering 14 assists. Moving up to the U18s last season, Sangha made 17 appearances, scoring two goals.

After graduating high school, Sangha still had one year of eligibility left with the Whitecaps but decided to head straight to college, where he was recruited by NCAA Division 1 school the University of Memphis.

Sangha became an immediate starter with the Tigers in his Freshman year, making 19 appearances during the 2018 NCAA season, scoring two goals and notching three assists as Memphis got to the AAC Conference semi-finals. Sangha came up big when the playoff pressure was on, with one of his goals and two of his assists coming in the postseason.

Back in BC for the summer of 2019, Sangha played for TSS Rovers in USL League 2, making 10 appearances.

His 2019 college season saw him play 17 matches for Memphis, 14 of them starts, scoring three goals and adding four assists. With Covid wiping out his 2020 Junior season, that was then played in the Spring of 2021, with Sangha scoring one goal in nine appearances.

Sangha transferred to the University of Portland for his senior year, starting in eight of 18 appearances and scoring one goal. Now graduated, Sangha will be using this L1BC season to put himself in the shop window and will be a key, experienced addition to a young Whitecaps side.

CALEB VALLANCE – 19-year-old attacking midfielder Caleb Vallance had a tougher time to get noticed than some other players, coming from the remote Powell River community, but impress he did, joining the Whitecaps MLS Academy in August 2019.

Playing his youth soccer with BCSPL side Vancouver Island Wave and VIPL side Upper Island Riptide, Vallance has also played locally in the men’s game with Powell River Villa in the VISL top flight.

Vallance played for the Whitecaps U19 side in this past season’s FVSL Premier Division, and although he didn’t find himself on the scoresheet, he put in a string of impressive performances.

A multi-sport athlete, Vallance’s other talents are in track and field, where he has regularly taken part in the 400m, 1500m, relay, and shot put events prior to moving to Vancouver. 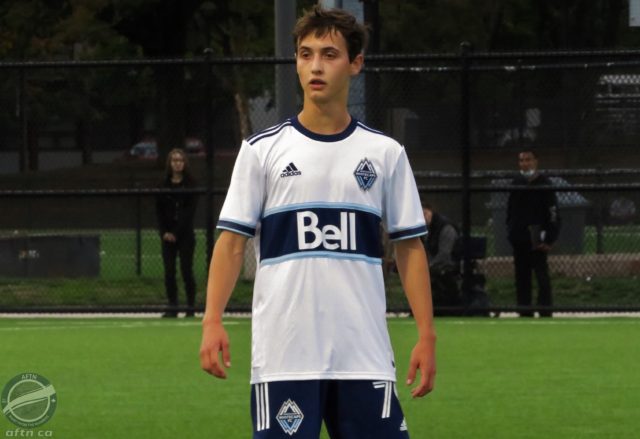 Turning 19 later this month, Chris Album only joined the Whitecaps academy from West Van FC in 2021, but he’s certainly made an instant impression.

Album was the highest scorer for the Whitecaps in FVSL play this past winter season, hitting 20 goals across all competitions, which included three hat-tricks and five braces. This next level will be a great test for the striker and a key next stage in his development.

KEISHEAN FRANCOIS – 18-year-old forward Keishean Francois has been with the Whitecaps academy since August 2019, joining from BCSPL side Coastal FC.

Francois was included in the MLS Whitecaps preseason camp in 2021, both here in Vancouver and then down in Salt Lake City. In January this year the winger was called up by the Grenada national team for a 10-day training and development camp in Florida. 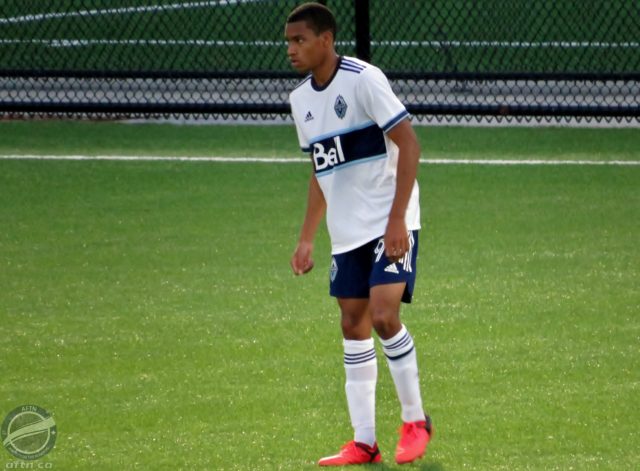 Eloliyon ‘Yayo’ Mutombo is an 18-year-old forward from Richmond who joined the Whitecaps academy in August 2017 from BCSPL side Fusion FC.

Starting in the U13s, Mutombo has been steadily progressing and impressing through the age groups and scored six goals across all competitions for the Whitecaps U19 side in the FVSL this past winter season.

His first month with the Whitecaps saw Mutombo head to Mexico to play for the Whitecaps in the CONCACAF U13 Champions League, where he scored two goals against Chicago Fire. 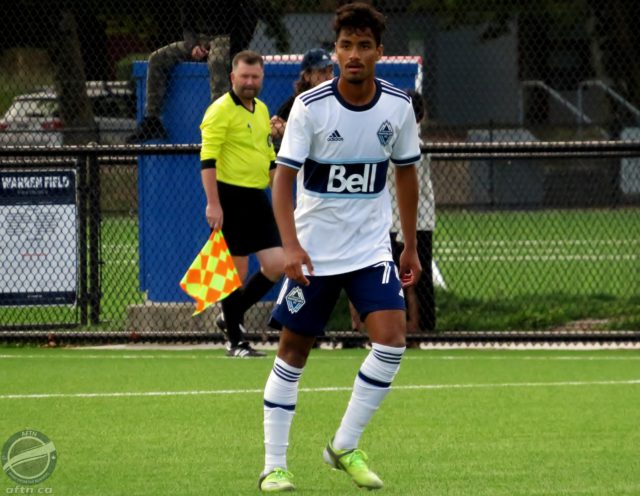 Tomas Pena headed west from Winnipeg to join the Whitecaps MLS academy in Vancouver in September 2020 having spent time with the club’s Manitoba Academy Centre.

Prior to the Whitecaps, the 19-year-old played his youth soccer with Bonivital Soccer Club and was part of the Manitoba Soccer Residency Prospects Program. He also represented Team Manitoba at the 2019 Western Canada Summer Games, winning a runners-up medal.

Pena scored seven goals across all competitions for the Whitecaps U19 side in the FVSL this past winter season.

SYDNEY WATHUTA After impressing in a combine in early 2020, Sydney Wathuta joined the Whitecaps MLS academy last year. The Alberta native played for New Frontier SC and Calgary Blizzards prior to coming to the ‘Caps and before that he played with Power FC, earning himself a training stint with Brentford in England back in 2014.