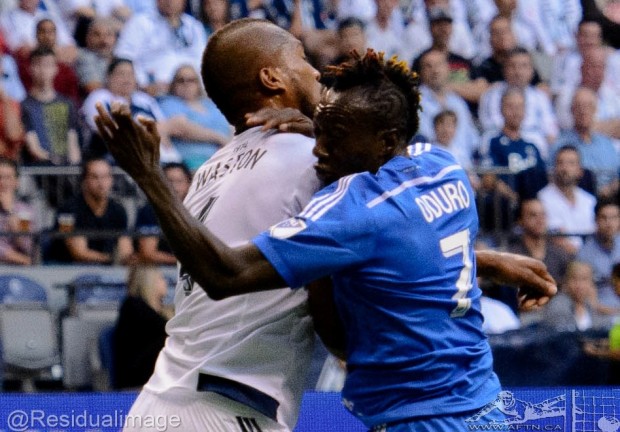 Vancouver Whitecaps kick off their 2016 MLS season with a sixth straight home opener, and their second against Montreal Impact at BC Place. Kick off is 2.30pm

And so another season is set to get underway for the Whitecaps! Will the ‘Caps be able to make better on last season? It will be a tall order to do that.

Carl Robinson has kept the spine of the team together. As the coaching staff got rid of some older veterans, they brought in some new veterans. Robinson has continued to try the “build from within” strategy that many successful MLS teams (Dallas, NYRB come to mind) are using.

What will the new season hold in store for the Caps? They are competing across a number of competitions once again, with five trophies on the line – the MLS Cup and Supporters’ Shield, the Canadian Championship and the Voyageurs Cup, the Cascadia Cup and the CONCACAF Champions League).

It would seem that squad rotation may be a big thing, with more minutes going to the youngsters in the squad. The veterans they have picked up also looked good and will hopefully bring an added dimension to the team that was lacking at times last season – scoring depth.

If they can build from the solid defence they had last year, they will only need to find some goals to get their first MLS trophy to add to the Voyageurs Cup. One thing for sure is the ‘Caps have not changed much, and nor should they have! They went out to find pieces that were a problem last year. Hopefully what was added and them, along with the youngsters being brought up, will propel the team to victory.

From my seat, the Whitecaps have had a good preseason. The new additions have flourished and seem to be really fighting for places on the team. In addition, injuries have led to some youngsters (Kianz Froese and Marco Bustos) really pushing for spots and giving Robbo a difficult choice as to who should be starting.

Those questions cast doubt about several players’ health for the opening game and the first month of matches. That will provide opportunities for some to step in and try to win a spot from day one. Robbo has never shied away from saying he believes in competition: if you can produce, you can stay in the starting XI.

You can’t read too much into preseason results, but Vancouver finished with a 5-1-0 record to Montreal’s 1-2-2, with the Whitecaps scoring at least two goals in every game, while the Impact were kept off the scoresheet in three of their five preseason matches.

It has been a very interesting preseason, with the Whitecaps testing a number of different options. This is partly due to players being injured, and partly due to Robbo realising the Whitecaps may need more than one formation to throw at teams to avoid that predictability of last season and create the odd surprise factor.

Last year we saw mostly a 4-2-3-1, which worked great on the road, but saw the ‘Caps struggle against ‘inferior’ teams at home, particularly with teams playing Vancouver’s trademark away style against them.

Sure we saw a 4-1-3-2 against RSL, but beyond that, not much tactical surprises were to be found. It was a bit interesting to see the Whitecaps trot out two striker formations, like the 4-4-2, and also to see the midfield heavy 4-1-4-1. These are formations should work well when at home against a ‘weaker’ opponent (if there is a thing in a league with parity built into the structure) or perhaps when there is a need to jam the midfield and make sure we don’t get scored on. They also work well for a small formation shift to see out a game.

Some of those formations really highlighted some aspects of players we don’t see in the 4-2-3-1. Like Pedro Morales coming in and cracking a shot from outside the box, to his pressing game that is not existent in the 4-2-3-1. That said, it really could be the quality of the opponents that allowed him to get two goals.

Despite all of that, I think Robbo is going to stick to what has been working for the last year. The 4-2-3-1 will be played on opening day, especially against an Impact side that has a counter attack that propelled them to a CONCACAF Championship Final a year ago.

Really only the 4-2-3-1 has the ability to make sure we don’t get countered to death by the likes of Ignacio Piatti and Dominic Oduro (while they also have the creative Harry Shipp now). It is almost like they could be playing for a chance near the box where either of the two are fouled, providing the opportunity for scoring off a set piece.

If the Whitecaps play with two defensive midfielders (providing they both don’t get caught too far forward) that will hopefully be able to snuff out those kind of chances before they happen. In theory at least! While at the other end, the ‘Caps will need to be able to batter down the Impact’s formidable defence, led by Laurent Ciman, to get the vital breakthrough and the win. Montreal will be happy with a tight defensive display and leaving BC Place with a point to open the new campaign. 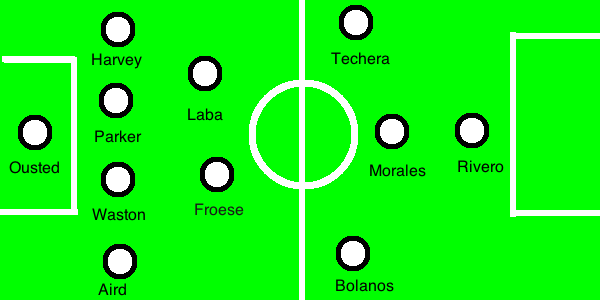 The Whitecaps solid defensive core gives them a somewhat easy time when it comes to picking their line-up against Montreal.

The amazing Great Dane, David Ousted, is the first name down on the teamsheet every week in goal. Up next are the two center backs, Kendall Waston and Tim Parker, both of whom should continue to improve on the excellent year they had last season. Waston does need to watch himself. He has perhaps rightly gained a reputation as a tough physical player, and he will need to be smarter once the preseason starts.

As debatable as they were in the preseason friendly against Chicago, you cannot give away two penalties in one game in MLS. It will kill your team and likely your chances of staying on the pitch.

Either side of that defensive pairing is where the real battle lies, with the full backs fiercely fighting for the starting spots.

During the preseason, Jordan Harvey really seems to have locked down his spot and as with the start of last season, this year it will be his to lose. Sam Adekugbe is breathing down his neck for it though. Even more so than last year when he won it by game two, only to lose it again after some unfortunate injuries.

On the other side of the field is where it gets really interesting. At the start of the preseason, in Jordan Smith I thought that the Whitecaps were investing in a long-term project (perhaps they still are). However Fraser Aird (the Canadian-Scot) has come in and really shown his chops at the right back position.

One of the biggest things that Aird brings that I like, is his crossing. So far the ‘Caps have not been accomplished at that, but this preseason his ability to cross it early and into the 18 yard box is giving chances to our forwards and mids when defensive mistakes inevitably happen. He is fast and physical (like any modern full-back), and yes, he likes to get forward and he may be exposed defensively, but I feel that strategic defending will come with time and training. He is sure to get games and I hope that he starts.

In the midfield it is a no-brainer to have Matias Laba back in the middle destroying everything; if he can continue to score a couple of goals and up his passing game he will become even more dangerous. As to who will be playing alongside him, Russell Teibert looks to be the first choice, when fit, if Robinson wants to play two straight up DM, but Deybi Flores has also pushed hard in preseason to be in the mix. Teibert will not start this Sunday. Could Flores?

I see Kianz Froese stepping into the spot, although we may even see Pedro Morales continuing the preseason experiment and dropping back to that area if Robinson wants to go with a two striker formation like we saw against Minnesota last week. If Morales plays deeper, he needs to keep up his defensive pressure and not get too caught up in the free role.

At the attacking spots, it’s interesting again. I think on the wings, we will see Cristian Techera and Christian Bolaños starting this game. I really enjoyed the craftiness that those two bring on the field. Bolaños will look to continue to build the chemistry that he and Morales have had so far. It should be an interesting first game for them and I would not be surprised to see Bolaños make a good splash in this game. By taking some of the creative pressure off of Morales I could see this opening up the game for both players and those around them.

Octavio Rivero should be getting the start up front. He has looked okay in preseason, and he needs to work a bit on his touch. Hopefully he will be able to get a bit more service with Bolaños in the midfield as well. Also, he is being paid to score! That is what he needs to do. Especially to keep his place with the strong pressure from Blas Perez and Masato Kudo. We will see Perez at some stage Sunday, it could even be from the start, but Kudo is unlikely to make it as more than a bench player for this one.

Depends on how injured some of the Whitecaps are. Will Laba be match-fit after missing time for the birth of his first baby? What about Manneh and Teibert? Manneh returned to light training on Wednesday and is likely to feature on the bench for this one if his ankle is deemed low risk. Teibert hasn’t trained for over a week and is almost certainly going to miss out on the gameday squad.

With those absences, with Morales play in deep alongside Laba again with Robinson going with two strikers up front in Rivero and Perez? Or will Morales fill his usual number ten role, affording a chance for Froese to start alongside Laba at the back of the midfield?

With Didier Drogba’s knees enjoying some extra time in the Florida heat and on their grass, the striking threat is likely to fall solely in the hands of Dominic Oduro. The big Ghanaian will be a handle for the ‘Caps backline and Parker and Waston will need to be careful not to give him space or dive in too early on tackles to keep him at bay. He may be ploughing a lone furrow though, which should help Vancouver.

PREDICTION FROM THE VIEW FROM 202 CREW:

Nick – 2-1 Vancouver, with Rivero and Bolaños for the ‘Caps.

Dan – 2-0 Vancouver. Ousted starts off the season with a clean sheet! Rivero and Techera to score.