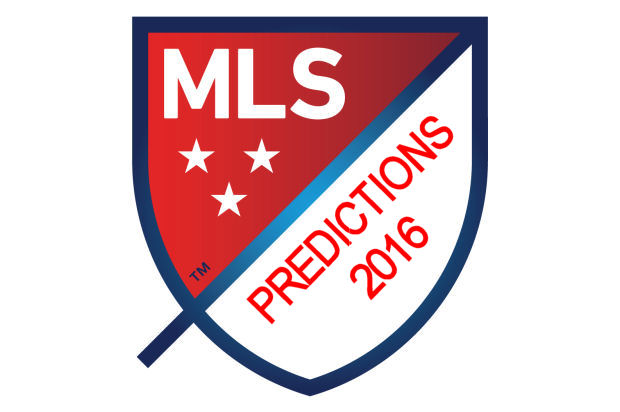 Ah, it’s that time of the year again. The start of a new MLS season and every site is flooded with a swath of prediction pieces. It’s a staple of sports writing and we’re no different here at AFTN.

In fact, I’ll admit it. I love prediction pieces, well just as long as they’re not mock drafts. Pointlessness personified there. In particular I especially enjoy the re-visiting of them to see just what were we thinking a year ago.

This year we have an expanded AFTN team of ten, so between us, we surely have to come up with something knowledgeable!

We’ll be looking at many aspects of the 2016 MLS season, but before we get to this year’s predictions, let’s see who fared best last season.

In the Western Conference, no-one predicted Dallas to win it or Vancouver to finish second, although there were a few second and third place predictions respectively. Four of us correctly named five of the six playoff contenders, but in actual correct finishing positions, Steve was best with a paltry two, with Aaron and Michael at least nailing one. Poor, poor, poor punditry!

In the East, Michael and Tom predicted two correct finishing positions, while Steve was best in predicting five of the six playoff contenders, with everyone else naming four.

The Supporters Shield winners and MLS Cup finalists threw us for a loop. No-one predicted New York Red Bulls to lift the Shield or either MLS Cup finalist. The abject failure of New England hit most of us pretty hard. Tom did at least correctly predict the MVP impact that TFC’s Sebastian Giovinco would make.

If that’s not the best set up to take this year’s predictions seriously, I don’t know what is!

But enough about 2015, who do we fancy to take home the glory this coming season? We asked the AFTN team of Aaron Campbell, Chris Corrigan, Dan Came, Jay Duke, Joe Deasy, Michael McColl, Nicolaas Rupprecht, Steve Pandher, Tom Ewasiuk and Zachary Meisenheimer to predict where each team will finish in both the Western and Eastern Conferences, along with who will be the League’s MVP, who will win the golden boot and who will contest, and eventually triumph in, the MLS Cup?

What soon became interesting is that while the West appears to be a bit more predictable this season, the East seems to be wide open, with a wide range of opinions on where the teams will finish.

And while the likes of Leicester City and West Ham may be surprising supporters the world over with their performances in the English Premiership this season, there doesn’t seem to be much likelihood of a team in MLS becoming the dark horses and surprising everyone.

For me, a surprise package would mean coming from the teams that missed out on the playoffs last season and it’s hard to see any of them, in either conference, make the drastic turnaround to be high flyers this time around, although there could be a couple of contenders in the East for the best (small) improvement overall.

So let’s kick things off with how we feel the Western Conference will pan out….

Year upon year, the Western Conference seems to get stronger and stronger, with very little to choose between most of the team. This season may be a little different. There definitely feels to be more of a clear gap between those that will be the playoff contenders and the rest.

There’s certainly been some strengthening from all teams, but to varying degrees. LA have spent big as always. Seattle will no doubt follow suit in the summer. Vancouver and Dallas have made tweaks to their squad and are seeing the fruits of their investment in youth pay off as their players mature with another MLS season under their belts.

Defending Cup champs Portland have seen some key players go and look weaker as a result. Sporting KC have added shrewdly and haven’t been hit too hard in the departures.

Those six teams filled the playoff spots in the West last year and it’s hard to see past them too much this time around. It’s just where they may finish that’s the big cause of debate.

From the rest looking in, it’s hard to see anyone shaking things up too much. San Jose look stronger, but hardly have you quaking in your boots. RSL looked weaker and have lost some important pieces, but they didn’t look too bad at times in their Champions League defeat. Houston look set for another year of struggle under Owen Coyle and Colorado feel rudderless and the conference’s new Chivas in the waiting if they don’t get their act together soon.

There were some wide ranging opinions from the AFTN team as to where everyone would finish, but a lot of consensus as well, and rather stunningly, and completely independent of each other, there is one hell of an optimistic air surrounding the Whitecaps this year.

Half of our pundits had the ‘Caps winning the West with only Aaron and Jay feeling they would finish worse than last year in 3rd.

Not too much hope for Colorado in our predictions though. The basement beckons. If they’re really lucky, second bottom!

So here’s how everyone places the teams in the West for this season.

A lot of numbers to take in there, so we came up with a final Western Conference table based on an average predicted finish from our ten pundits. And it looked like this: 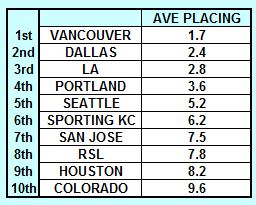 So some blue and white tinted glasses or will this indeed be Vancouver’s year? It’s going to be exciting to find out!

While the West feels more cut and dried, and we’re predicting the same six teams to make this year’s playoffs again, there was a lot on agreement. When it came to the East, however, our pundits were all over the place, suggesting a very wide open conference once again.

New York Red Bulls saw off the rest last year during the regular season, lifting the Supporters’ Shield in the process. They look strong again despite shipping out ten players and bringing in ten, seven of which were impressively homegrowns from their excellent academy. They certainly seem to the favourites again with the AFTN crew.

Last year’s MLS Cup runners-up look to have added well and have tied up Kei Kamara to keep them strong, and it’s really hard not to see Toronto’s heavy, heavy investment finally producing the goods. We still have to hope they mess up, but it’s getting harder and harder to see it.

Montreal’s season could depend on just what they get out of Didier Drogba. Are they a one-man team? We’ll see from early on with the veteran sitting out games on turf. New England heavily disappointed last year and haven’t made additions that make you think they’re going to be that much better this time around and are DC United on a slippery slope once again?

Last year’s newbies have a season under their belt and both continue to spend big. It’s hard not to see at least one of Orlando or Man City making the postseason, but which one? And could it be both? Whoever doesn’t get in is going to have to face some tough questions after what they’ve shelled out.

Of the rest, everyone seems to agree that Philadelphia will continue to be awful and Chicago not much better, although they surprised and at times impressed in the Portland preseason tournament. Probably best not to read too much into that.

So here’s how everyone places the teams in the East for this season.

A lot of numbers to take in there again, so here’s our final Eastern Conference table based on an average predicted finish from our ten pundits: Another high energy season from New York? Or will this finally be Toronto’s year? And is that a pig in the sky?

Of course the MLS regular season is somewhat devalued by a playoff system that lets in 60% of the clubs competing, but let’s not open up that particular can of worms again. It is what it is.

What you do in the regular season and what you’ve achieved often goes out the window come the postseason. So with the MLS Cup at the end of the rainbow, here’s who we felt would hit November in their stride and take home all the glory at the end of the season.

First, here’s who everyone picked for the MLS Cup finalists and winner.

And from that, there’s no clear consensus and the 2016 MLS Cup winners are a toss up between Dallas, LA, NYRB and Vancouver! Each had two votes, with Dallas and New York also getting two nods as defeated finalists. Horribly, four pundits felt TFC would make the final. Disappointing!

So to wrap things up with our predictions, let’s look at a couple of the individual honours, those the League MVP and the Golden Boot.

The consensus predicted winner of the MVP for 2016 is Toronto’s SEBASTIAN GIOVINCO.

A predictable choice? Perhaps, but he got four of the ten votes (from Jay, Michael, Steve and Zach) and there were seven players nominated altogether.

The Golden Boot also saw SEBASTIAN GIOVINCO win in a bit of a landslide.

He picked up five votes (Aaron, Chris, Jay, Tom and Zach), with Columbus’ Kei Kamara picking up the votes of Dan and Michael, and Dom Dwyer (Nicolaas), Robbie Keane (Joe) and David Villa (Steve) also getting some nominations.

So that’s our predictions for the year. Agree? Disgaree? Let us know in the comments below.

For now, let’s just get this new season started.