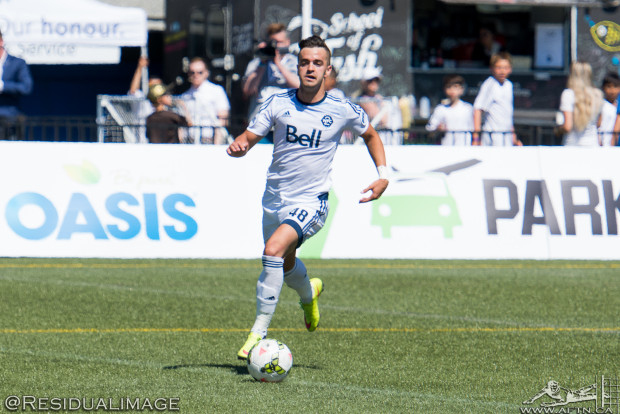 It was quite the impressive 13 minute spell for WFC2 substitute Victor Blasco on Sunday against Seattle Sounders. His two goals at the death, 78 seconds apart, secured Blasco USL Player of the Week honours and the Whitecaps three crucial points.

The goals were Blasco’s first as a Whitecap and for those of us who have been following the Spaniard closely this season, it was the breakout performance we’ve been waiting for. And so has he.

“I’m really happy,” Blasco told reporters after the match. “I’ve been working hard for that for a long time. The most important thing is the three points, so thanks to my teammates.”

You could sense that it was just a matter of time before Blasco got those first goals, and they must have come as something off a weight off his shoulders.

“Yeah, it’s a bit like that,” Blasco told us. “I had a bit of pressure for that because I’ve been always used to scoring goals. It was taking a little bit long, but now I’m happy. I was kinda calm though because I’ve plenty experience scoring goals. I knew it was like. If I take my time and was calm then there you go.”

Blasco has scored goals wherever he’s been. The 22-year-old (his birthday was on Canada Day!) came through the fabled Barcelona academy system before leaving to play with the youth and reserves teams of Mallorca, Cornella and Sabadell.

Current WFC2 head coach Alan Koch had scouted Blasco in Spain and brought him over with the initial plan of playing NCAA soccer with the SFU Clan. That move was delayed to allow Blasco to head over to Nanaimo to play for Vancouver Island University Mariners, while taking classes to improve his English.

As fate would have it, Koch moved on from SFU to take charge of the Whitecaps USL team and he knew a player he wanted to bring with him.

When we ran our profiled Blasco in March, we asked Koch about what Blasco could offer the team. “If you watch him in a training session, you’ll see within five minutes” he told us.

And it’s true. Blasco has impressed with his skills and touch in training and scrimmages. He just needs to put it all together in competitive games, and these two goals could very well be the spark that now sees him kick on and impress on the pitch for the rest of the season.

There’s no doubting that Vancouver Whitecaps’ USL team is packed with talent. Some of it is more honed than others at this stage of their careers. Some of it is raw. Some of it has taken a bit of time to find its feet in the pro ranks and get fully going.

It’s a young side and with that, as Carl Robinson regularly highlights with the MLS team, comes inconsistency, and that is also what Koch wants to see from Blasco.

“When he scored that goal, you could kind of see a weight off his shoulders instantaneously,” Koch told us. “A huge sigh of relief for him, which is great, and he went back and scored a goal right away. Hopefully that game’s the catalyst that gets him going.

“Good game by him, but he’s still capable of more. We see special things from him in training. He just needs to figure out how to be more consistent. If he can do that in every game, he won’t be in the USL for very, very long.”

The aim for all the players on the USL squad is to grab people’s attention, impress and ultimately land a MLS deal with the Whitecaps. Not all will make it with the ‘Caps, not all will make it to a higher level at all, but you get the feeling that Blasco is certainly one of the players that the Whitecaps are taking a close interest in to see how he develops and where his ceiling may be.

Blasco has played in 13 matches so far this season, starting 7. With two goals and two assists, it’s not a bad return for the winger, and he also sits third on the team for shots on goal.

Much like the team, it was a somewhat mixed start to the season for Blasco, who was sent off in the home opener against Toronto, before finding his rhythm. So on a personal level, how has he found his first season with the Whitecaps so far?.

“I think it was kind of a rollercoaster a little bit,” Blasco told us. “I’ve been playing good matches and some of them not so good. I’ve been getting used to the league also because here they play different. Also, fitness-wise, I was struggling a little bit, but now, every day that passes, I’m getting more used to it and I’m more happy and comfortable with the team and the coach.”

As Koch says, consistency is now the key fir Blasco and putting in the type of performances he had as a super sub against Seattle, week in and week out.

That in itself is a challenge for all the young players on the USL team due to squad rotation and the minutes being shared around between the squad players and the MLS players coming down to play.

But that is just the nature of the beast and Blasco knows, to thrive in the environment, you just have to find way to succeed.

“When we all came here, we knew it wasn’t going to be easy because a lot of the MLS guys come up and down,” Blasco admits. “We all know our role here. We’re all to work for the group. So every time we get our chance, we need to take it the best that we can.”