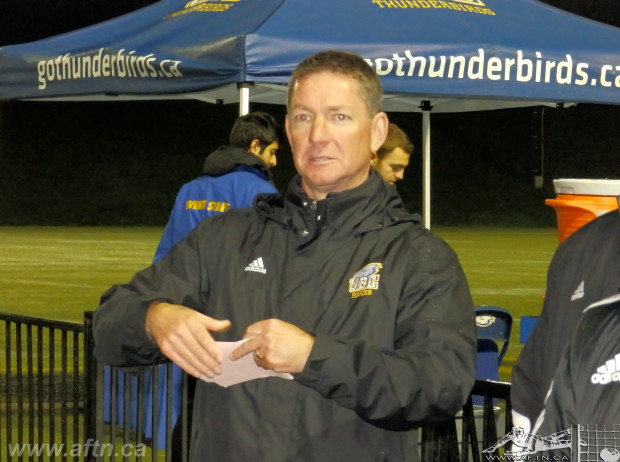 The UBC Thunderbirds are back at the CIS Nationals this week, kicking off their quest for a 14th Canadian crown at York University in Toronto on Thursday.

The newly crowned Canada West champions are undefeated during the season so far. A feat they also achieved in 2012 and that ended with them taking home the national title. Can they do it again?

In celebration of the Thunderbirds achievements, AFTN is bringing you our second Thunderbirds Week, with lots of features and interviews on the team, hopefully on their way to another Championship.

We’ll also bring you coverage of the women’s CIS nationals, which are being hosted by the Canada West winning Thunderbirds as well.

We’re a little late kick the week off we know, due to all the Whitecaps coverage we had to get out of the way, but we begin the week today with a chat with UBC head coach Mike Mosher.

It’s been another stellar season for the UBC Thunderbirds, one they hope will end on Sunday in Toronto with their raising of their 14th CIS National Championship.

The Thunderbirds finished the regular season with 10 wins and 2 draws from their 12 divisional matches. They only conceded a staggering five goals, banging in 31 at the other end in the process.

They added another two in their Canada West quarter-final and semi-final match-ups before being made to work hard last weekend in a 2-1 extra time win over UVic Vikes that saw UBC crowned Canada West Champions for a record 16th time.

Heading into this week’s nationals to compete against the best college sides in Canada, head coach Mike Mosher believes having such a stern test in the Canada West playoffs has been the best preparation his team could get.

“Dave Hendrie [assistant coach] and I were having a chat and we were saying we’ve had some tough tests,” Mosher told AFTN after Saturday’s Canada West Championship success. “Yesterday [in the semi final against Fraser Valley], last week against Saskatchewan. So we’ve had regular difficult games. The scorelines may not indicate it. Yesterday was not easy, nor was the Saskatchewan game.

“So yeah, the more competitive games you can get the better. The challenge is when you’re into this, you played last night, you have to play again tonight, you have to fly across the country on Monday and then you’re playing hopefully three games in four days next week. Both teams are conserving players a little bit but you still want to lift a trophy at the end of the day, so we’re very happy with that.”

Mosher was named Canada West Coach of the Year for the second time in three seasons. It’s the third time that Mosher has won the accolade in his 19 seasons leading the Thunderbirds.

With six Canada West titles already under his belt, he’s now looking for his fifth CIS Championship to cap off what has been another excellent season for UBC.

What makes it even more impressive is that once again, Mosher had to rebuild a lot of his squad after losing a number of veterans at the end of last season.

It’s all just part of the difficult process of being a college coach, but one which UBC always seem to handle really well.

“We knew we were losing guys,” Mosher told us. “Shoot, we’ve lost top players probably four or five years in a row. We’ve turned over, on average, three first team Conference All-Stars every year. We’ve been fortunate. We’ve recruited well. We’ve developed well within the system. We’ve had players waiting in the wings to come in right away.

“This coming year, there was a few questions, but I think we always knew that we were going to be in every game. One, with a goalkeeper like Chad [Bush] coming in, a top quality goalkeeper. We definitely put a goal at the start of the season to be the lowest conceding team in our Conference, because at the end of the day, clean sheets win games.”

Former Ottawa Fury goalkeeper Chad Bush has perhaps been the biggest addition to this season’s Thunderbirds squad. A 19-year-old Bush was named the USL PDL Goalkeeper of the Year in 2013 and he’s been dominant in the UBC defence this year, recording eight clean sheets during the regular season, including six straight to start off October, and adding a further two in the playoffs.

With only six goals conceded all year, that defensive strength will serve the Thunderbirds well in the nationals. But they’ll have a tough job on their hands if they are to lift their 14th title.

Despite their unbeaten season and number one ranking for much of the year, UBC find themselves seeded fourth heading into nationals. That will likely set up a huge semi-final clash with the number one seeds, OUA champions and defending CIS champions, the hosting York Lions, on Saturday.

Before they get there, the Thunderbirds kick off their tournament on Thursday with a semi-final match-up against the fifth seeds, and OUA bronze medallists, Toronto Varsity Blues.

Whoever the Thunderbirds end up facing, Mosher knows his side have a tough road ahead and coming off their second undefeated season in four years, it’s likely UBC will have a target on their backs from the eastern teams.

“I think everybody’s going to be good out there,” Mosher mused. “I’ve seen the teams that are all in. It’s all one and two seeds from their Conference. Hey, everybody’s got a target because it’s win or go home. It’s the nature of the tournament.

With four different Conferences and teams spread out all over the country, scouting opponents can be made somewhat more difficult, but Mosher is confident his team will be more than prepared for whoever they come up against.

“I think film covers enough,” Mosher said. “I’ve seen most of the teams now in the last couple of days that’s going to be there. Sometimes as coaches you maybe watch too much film and you worry maybe more about the opponent.

“I say to these boys a lot, ‘it’s about us’. It’s about us getting it right what we do. We’ll prepare you for what you’re up against and what you need to know but I think we’ve seen enough.”

UBC kick off their 2015 campaign at 1pm PST on Thursday and you’ll be able to watch the game HERE.

The Thunderbirds are going to have the toughest route if they are to claim their record breaking 14th CIS title. But their history at the nationals should convince anyone that they’re more than capable of doing it. Everyone at the Thunderbirds is certainly convinced.

“Our record’s been pretty good at the tournament, when we’ve gotten there on a regular basis. We’ve gotten to the final every time, out of probably 17 plus times. So I think we’re well prepared for it. We’re going to get out of here early on Monday and get the travel behind us and get the training sessions in there.