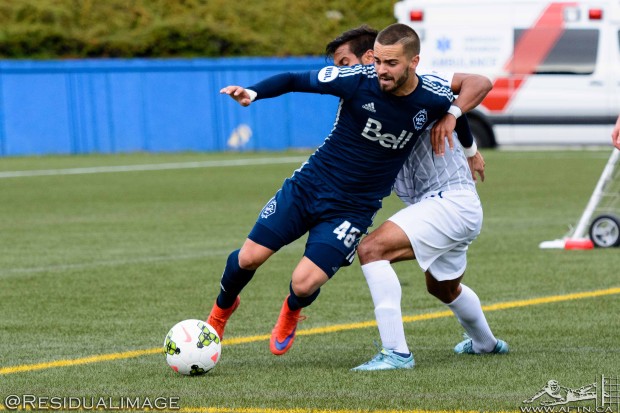 Having a place for the MLS fringe players to get valuable competitive minutes, keep match sharp, recover from injury and to try and impress Carl Robinson were all important factors behind the team.

WFC2 worked well in that regard for the likes of Tim Parker, Ben McKendry and Marco Bustos, to name a few, whereas Diego Rodriguez and Ethen Sampson recovered from injury and likely showed Robbo they weren’t going to make it as MLS players at the same time, after their struggles in USL action.

Having a place for the Caps’ young homegrown talent to develop further was another key focus of the team. A place to blood Residency graduates and current talent and to see just where their ceilings, and footballing futures, might lie.

Residency alumni Jackson Farmer, Jordan Haynes and Chris Serban got valuable minutes this season, impressing at different levels; Mitch Piraux missed out through injury but will be back next season; former PDL player Brett Levis looked to take his game to the next level; and the latest trio of Residency players to get ULS contracts – Terran Campbell, Kadin Chung and Tommy Gardner – all seem worth keeping an eye on.

Another purpose behind WFC2, however, is to have a look at other younger talent from outwith Canada, to see if the ‘Caps can unearth some hidden gems to move up to the first team. A player that will seize his chance to shine in the lower leagues and turn some heads along the way.

Spanish winger Victor Blasco most certainly shone in that category this past season.

Of all the players in WFC2 not already on a MLS contract, Blasco stood out as perhaps having the best potential to make the jump to the first team next.

Blasco played in 24 of the ‘Caps USL games this season, starting 16 of them. The Spaniard was third on the team in goals, with four, and led the side with six assists.

The winger had shown from preseason training that he had the skill and talent to stand out in the USL with the ‘Caps. Only to be expected from a player that came through the famous Barcelona academy and WFC2 Alan Koch told AFTN back in March that “if you watch him in a training session, you’ll see within five minutes” what he would offer the team.

Despite some exciting bursts in matches, it took Blasco a few months to get his first goal as a Whitecap. Part of that was down to finding his feet, not just in the pro game in Canada, but in what was still a new country for Blasco, who only came over to Vancouver Island University from Spain just over a year ago. 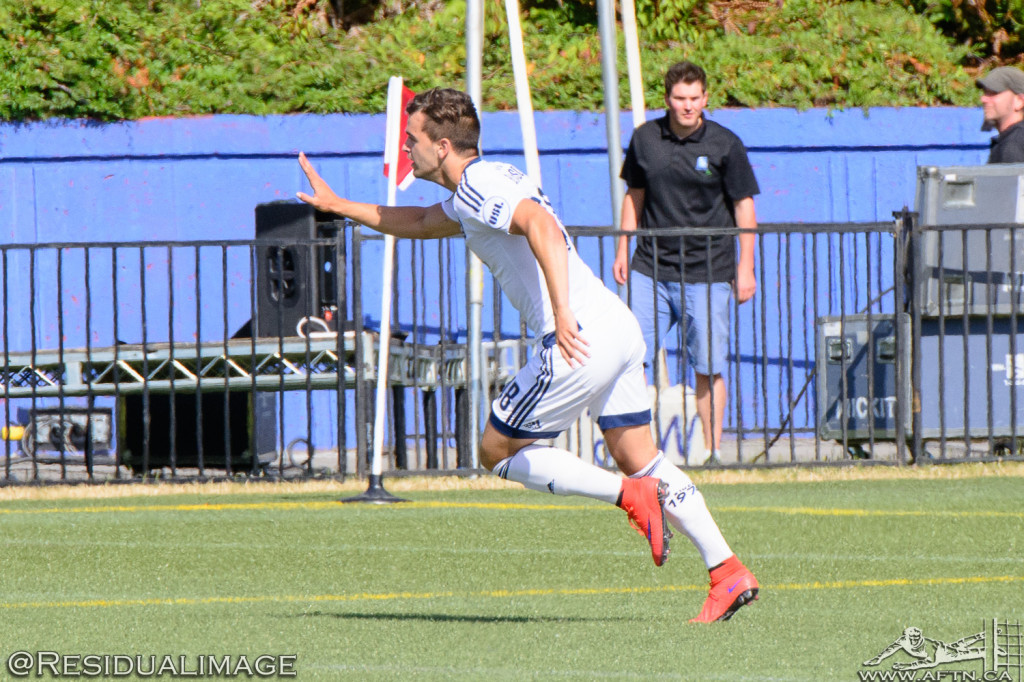 But when it came, in an electrifying substitute’s performance against Seattle on July 5th where he banged in two late goals in a 78 second spell to clinch the win, it was a weight off his shoulders and he started to really hit his stride.

“Personally, I had to get used to not just the team, but the coach, everything,” Blasco told AFTN when we caught up with him at WFC2’s winter training camp. “Almost Canada in general. I knew it was just a matter of time because I’ve been playing soccer my whole life.

“It was a little bit of a struggle at first, just getting used to it, then it was a very big relief scoring that first goal. It pushed my confidence a little bit up and then it went well.”

Blasco certainly had an impressive showing in his first year as a pro in Canada and showed why Koch had originally scouted him with a view to bringing him over to the SFU Clan.

With the poor economic climate in Spain, the plan was for Blasco to come over on a scholarship and spend a year at VIU learning English, before transferring in to the SFU program. But then Koch got the ‘Caps USL coaching gig and the Spaniard followed him into that fold instead.

Blasco knows he still a lot to continue to develop in his game, with consistency being one of the key aspects, but he’s put a lot of work in this year and the results have been clear to see. After playing in the lower leagues in Spain, he’s just relishing another opportunity in the pro game that he thought had perhaps passed him by.

“When I moved from Spain to Canada, I chose another way,” Blasco said of his current route to the pro ranks. “I chose a studying wise way. I didn’t think I was going to play professional any more in my life. I thought, okay, it’s a tough moment in Spain, as you know, and I got to study. But you never know, right, in life. This chance happened for me, and now, here I am. I couldn’t ask for more.”

As mentioned, the 21-year-old came through the fabled Barcelona academy system before leaving to play with the youth and reserves teams of Mallorca, Cornella and Sabadell.

And though it may be surprising to some, Blasco feels the quality and standard of play that he’s seen in his first season in the USL is certainly comparable to what he’s used to back home.

“I think the USL level is actually really good,” Blasco told us. “The only difference in Canada, and I don’t know other places, but the only difference that I see in Canada with Spain, is that beside NASL, USL, and obviously MLS, there are not really any other leagues that you can play as a professional. But any USL team could battle against any [lower league] team in Spain.”

While Blasco did well on a personal level in his first USL season, it was a tough inaugural campaign for WFC2. Finishing second bottom of the Western Conference, 12 points adrift of a playoff place, there were a lot of learning points along the way for Koch and the ‘Caps, especially in terms of the dynamic they have with the first team.

But Blasco believes it was a valuable first season for the team and a perfect building block to move forward to next season in good stead.

“We were a new team and it was a new league for us,” Blasco said. “We had to get used to it and to being together as a team. We did a pretty good job when we were the actual team together.

“Being a second team, you always have players coming down, coming up and it’s pretty hard being the first year as a new team, with different players every week. I think we did a pretty job good but we definitely have a way better team for next year.”

The WFC2 squad was certainly put together at short notice this year. Koch’s appointment in January was followed by open tryouts in February and a preseason training camp in March. None of that allowed a lot of time for team bonding, although kicking off the season with four games on the road at least helped a little.

It’s all very much different for year two.

Blasco is one of 13 players already re-signed for the 2016 USL season and the squad have been undertaking a winter training camp this month, along with a splattering of trialists, Robert Earnshaw and some MLS homegrown players.

It’s to keep them sharp, focused, build team chemistry and to work on tactics. And you just have to head along to Burnaby Lake to see how well it’s going.

“We have a very good coaching team,” Blasco said. “They always think the best for us every day. They push us a lot. It’s pretty easy to work in here because there are no days off. Having a mini camp between us here in the offseason is definitely positive for us.”

It will definitely be a much better prepared WFC2 side that takes to the pitch next year and Blasco is excited with what could lie in store.

“Personally, I’m pretty excited,” Blasco told us. “I see all the other guys as well. It might not, but in my opinion we have a very good team. We have a few players from last year and there are very good players coming. So we’ll see. You never know in soccer, right, but I’m pretty optimistic. I’m pretty excited.”

And it could also be an exciting future for Blasco with the Whitecaps.

Carl Robinson has liked what he’s seen from the Spaniard and has told us that getting that level of consistency required is what lies with just how far Blasco can go with the ‘Caps.

Robinson has already brought the winger in to train with the first team a couple of times towards the end of the season and as delighted as Blasco was to get a chance to train and learn with the MLS squad, he’s keeping his feet firmly on the ground and taking things one step at a time.

As far as he’s concerned, it’s just all about putting his head down, working hard in training and in games, and seeing what the future may bring.

“It’s a satisfaction for me because obviously I’m doing things well,” Blasco said of his training stints with the MLS squad. “But I know how this sport is. I know I have to go step by step. It’s only been a year here for me in Canada, so I couldn’t ask for more and I couldn’t ask for a better year, honestly. I’m just glad to be here and happy to help my teammates.

Robinson has mentioned to us in the past that he might want to take more of a look at him during the MLS preseason camp. It would be a fantastic opportunity for the Spaniard, but again, Blasco isn’t getting too far ahead of himself.

“I’ve heard there’s a possibility of going to a preseason camp with the first team,” he added. “If I get the chance, I’ll just do the same thing that I’ll do here – try to do my best and be myself.” 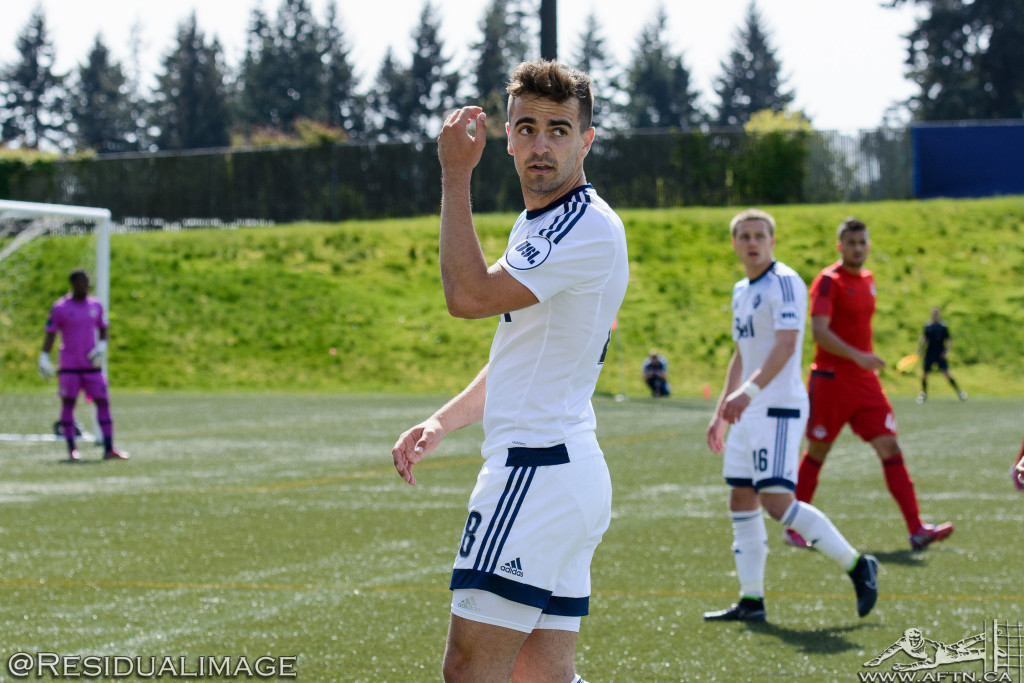