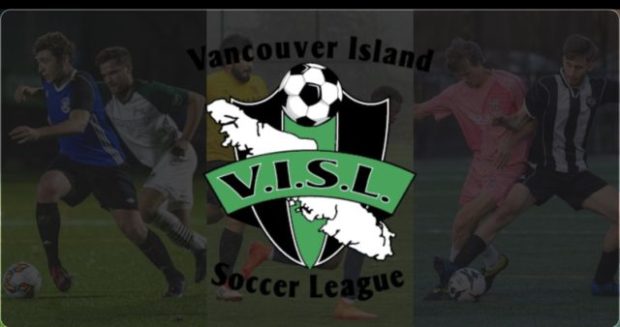 The Vancouver Island Soccer League (VISL) Division 1 2021/22 regular season, the top flight of amateur soccer on the Island, has come to a close.

With a very imbalanced schedule, all games were played, and heading into the last week, final placements near the bottom were still to be decided.

Here is what happened at a glimpse: 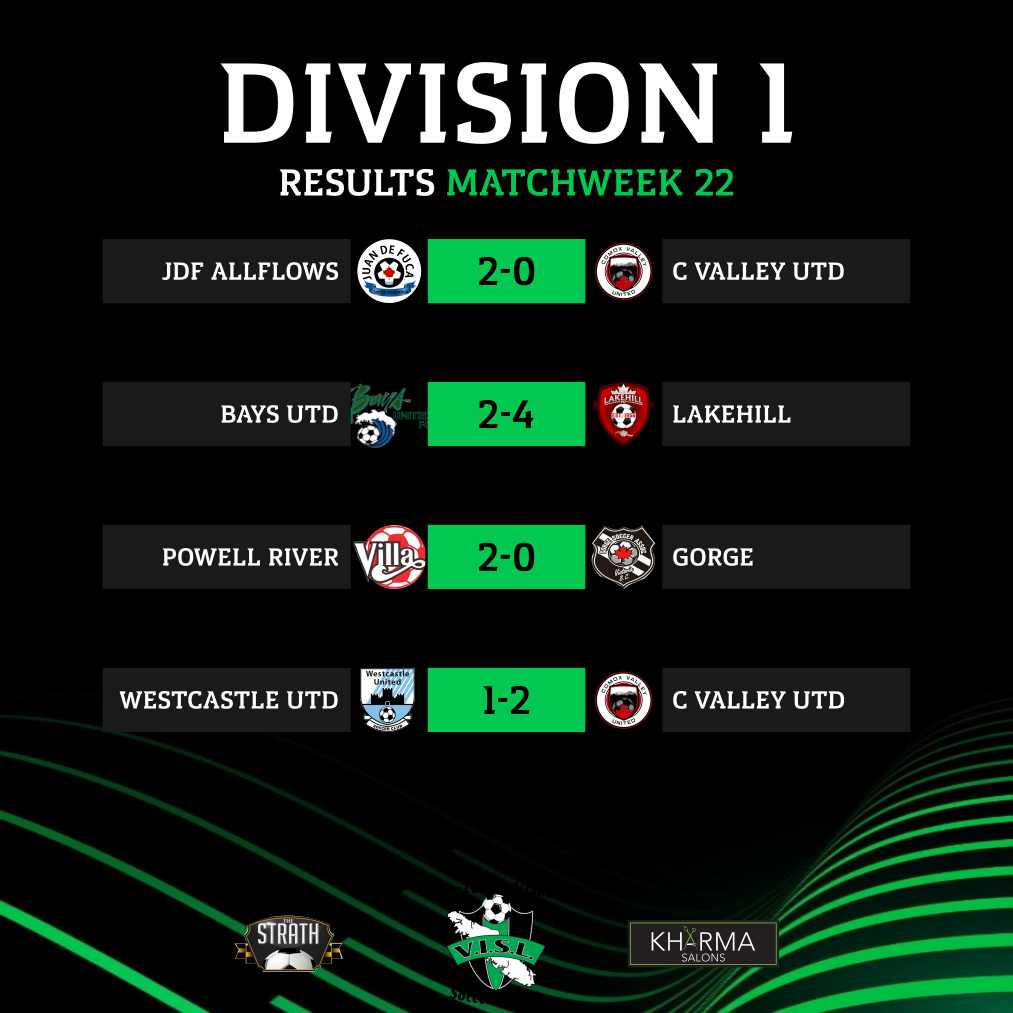 In a late finishing game from the previous week, Juan de Fuca finished their season by defeating Comox Valley 2-0 after goals from Ethan Emile and Devon Austin. Earning another clean sheet was keeper Cody Carter.

On Friday night, Lakehill saw off Bays United 4-2, where benches were thin and permitted players were common. Craig Gorman, Keegan Lang, and Matthew Olaka with a pair, were on target for the champions, with Patrick Nelson scoring both goals for Bays.

Saturday ended up deciding who would finish 9th and 10th and it was decided early in the afternoon as Powell River Villa defeated Gorge FC 2-0. Scoring both goals for Villa was James Timothy, while earning the shutout was keeper Scott McKenzie. The win for Powell River cemented their 9th place finish in the standings, just ahead of Comox.

Saturday saw the last Division 1 game of the season and it was Comox Valley over Westcastle 2-1 after goals by Kyle Bate and Ambrose Tinmouth. Scoring the lone goal for Westcastle was Kieren Erickson.

So with all game results entered, here is what the final VISL Division 1 standings look like: 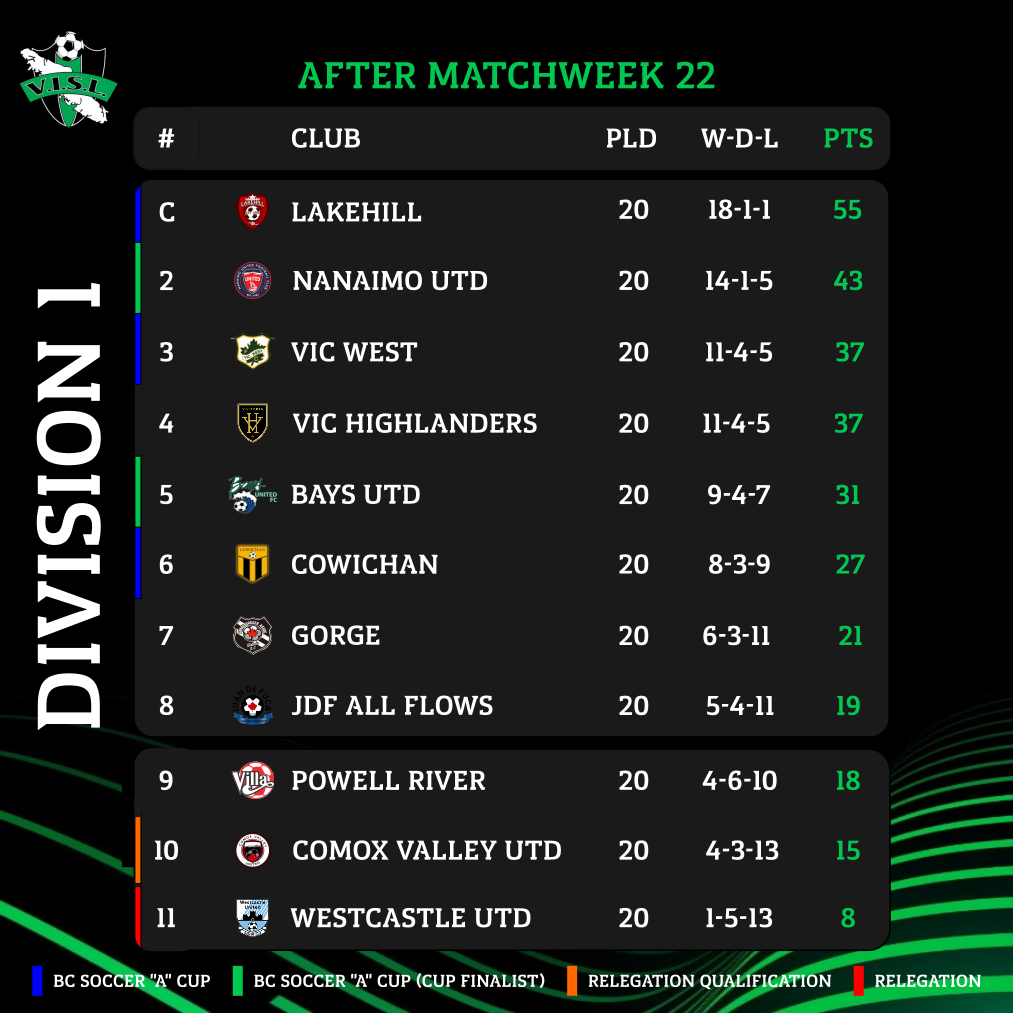 Spots 8 to 10 came down to the wire, and there will be a lot of what ifs discussed.

What it all means is that Juan De Fuca Allflows are clear of the relegation zone in 8th and Powell River finishes in 9th. The Villa will not need to worry about relegation as the 4th place team from Division 2 (JDF Hellas) does not plan to challenge for a spot.

It should be noted that teams in 1st and 2nd from Division 2 have declined promotion as they have club teams in the top flight already.

Finishing in 10th place was Comox Valley United. This is important as there is speculation that the 3rd place team from Division 2 (Prospect Lake) may challenge for the chance to be in Division 1 for next year. Prospect Lake will have one week to declare their intentions, so the overall drama may not be over quite yet.

The Golden Gloves leaderboard was fun to track this year. While not an official award in the VISL, seeing which goalkeeper led their team guarding the cage ended up pretty close. Hardeep Gahunia from Lakehill sits atop the heap of goalies that did the business over the course of the year.

Here is how that race finished up: 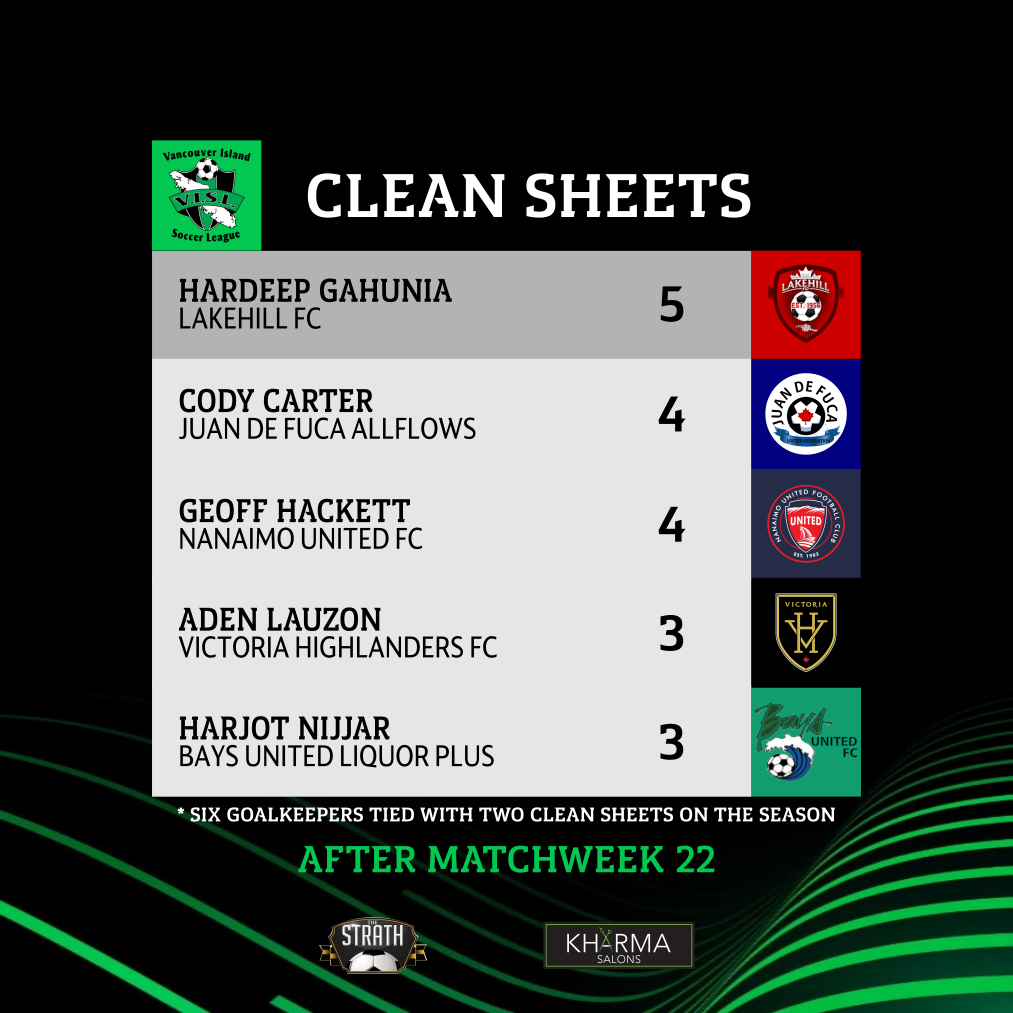 Another leaderboard we track is the goal scoring leader for the division.

Blair Sturrock of Lakehill stayed atop the Golden Boot list, even with Patrick Nelson of Bays giving it his all and notching a brace in their final game head to head.

An impressive year by both veterans, but Blair Sturrock earns the Div 1 Nanaimo Centennial Award for top scorer in the top division.

Here are the totals on the impressive list of goals scorers: 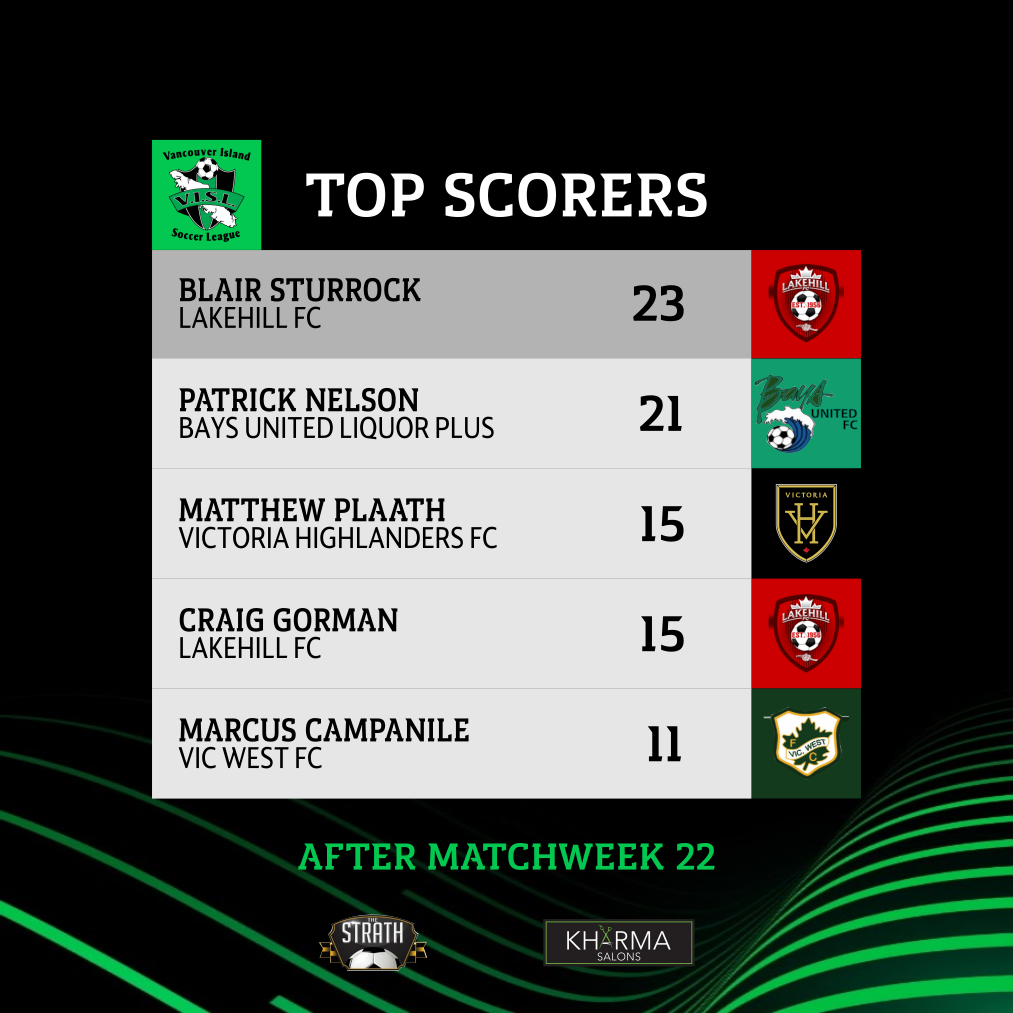 So that is a wrap on the regular season side of things. All divisions were completed over the weekend, and all results across them all can be found at www.visl.org.

Thanks for continuing to support local grassroots soccer, and the people that work and live in your community.

But the action is far from over. Cup Finals are this weekend and while those will wrap up the local season, the 2022 Provincial Cup begins next month.