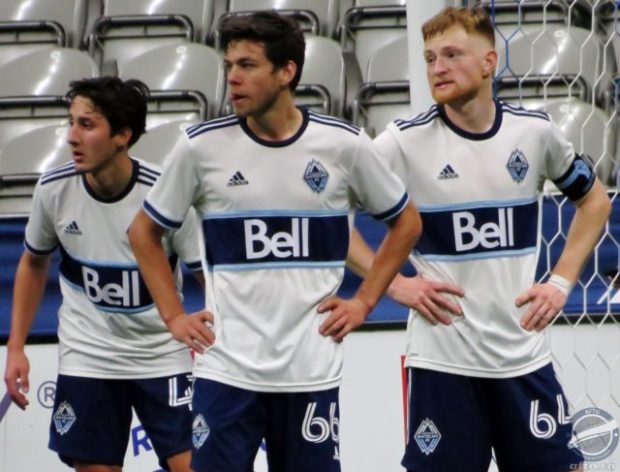 We’re going to run a series of articles profiling the squad in the build up to the season kick off, and we’ll be bringing you coverage of the team and the league all season long.

If you missed the first couple, check them out:

This time around we look at the four MLS SuperDraft picks that have just inked their new pro deals. 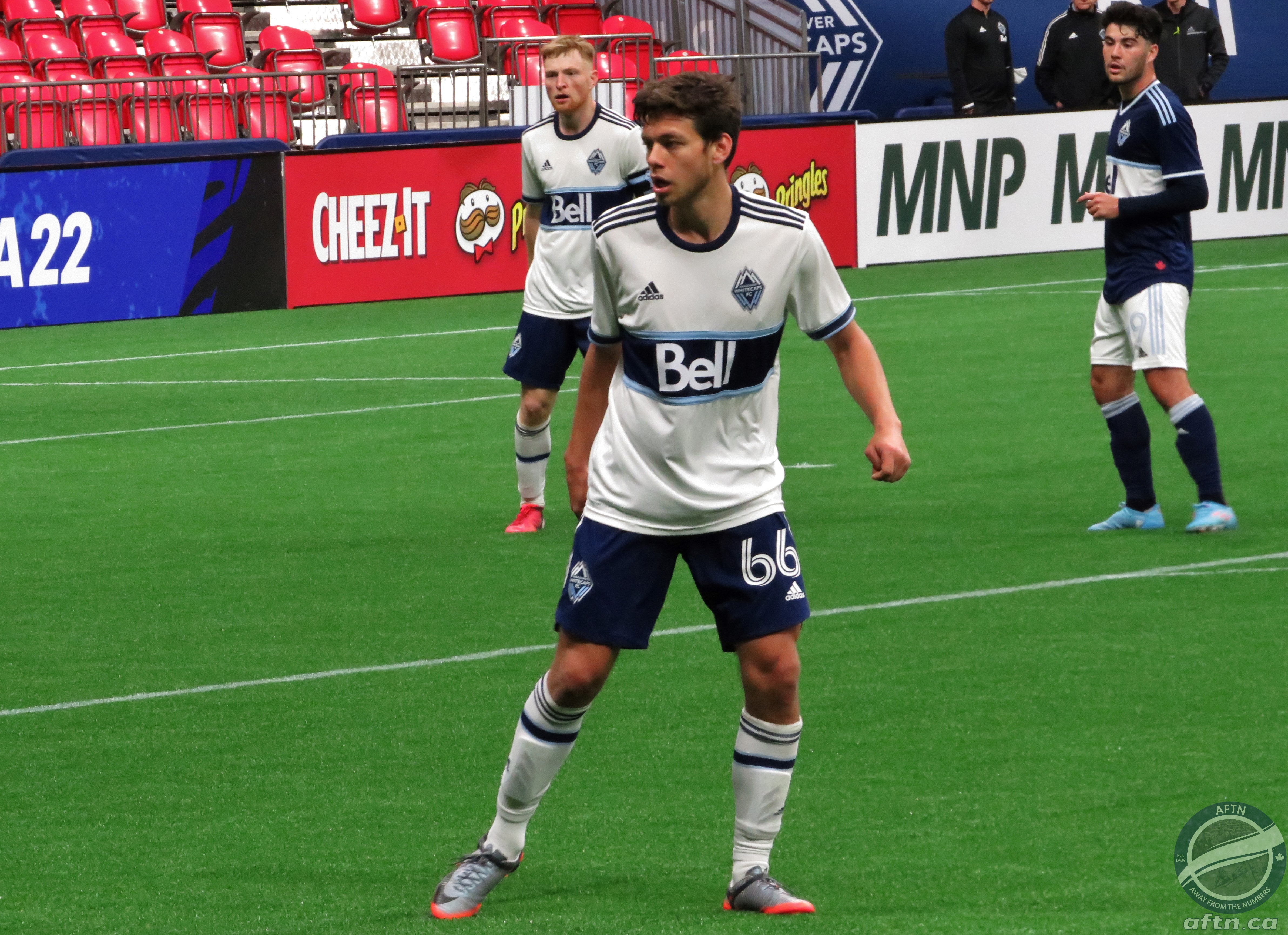 Selected 49th overall by the Whitecaps in the 2022 MLS SuperDraft, the third of their five picks this year, Giovanni Aguilar has been the one that has been the stand out performer so far from this year’s crop.

The 24-year-old central midfielder impressed enough in the early days of the ‘Caps preseason camp to be part of the second stage in San Diego, where he saw minutes in three of Vancouver’s four preseason matches, scoring the winning goals in the 1-0 victory over San Diego Loyal and the 4-2 defeat of LA Galaxy.

A native of Olivehurst, California, Aguilar’s youth career saw him play for Lindhurst High School, where he earned All-League honours three times and was team MVP, and local side Davis Legacy before joining Sacramento Republic’s academy for their inaugural 2015 USSDA season.

After impressing with the Republic, where he was named to the Western Conference Best XI after helping the U18 team reach the playoffs in the 2016/17 season, Aguilar headed off to college at California State University Northridge making 72 appearances for the Matadors, 71 of them starts, scoring three goals and adding 11 assists.

Aguilar was named to the 2017 Big West Conference All-Freshman Team in his rookie season and the 2021 Big West All-Conference First-Team in his senior one. His last season as a Matador saw him as co-leading scorer with three goals and he played 1,483 of a possible 1,654 minutes during the season, with his head coach Terry Davila feeling he is one of the best midfielders to have ever played with the program.

Signing with WFC2 isn’t Aguilar’s first pro deal, however. The midfielder, who can play as both a number six and an eight, returned to Sacramento, signing a deal with the Republic in December for the 2022 USL season ahead of this year’s draft.

Impressed by what they’ve seen so far, the Whitecaps secured a transfer of Aguilar last week for an undisclosed fee. His preseason form has shown that he is far from being out of place at the higher level and Vanni Sartini will take a good look at him in MLS Next Pro to ascertain what ceiling that next level could now be. 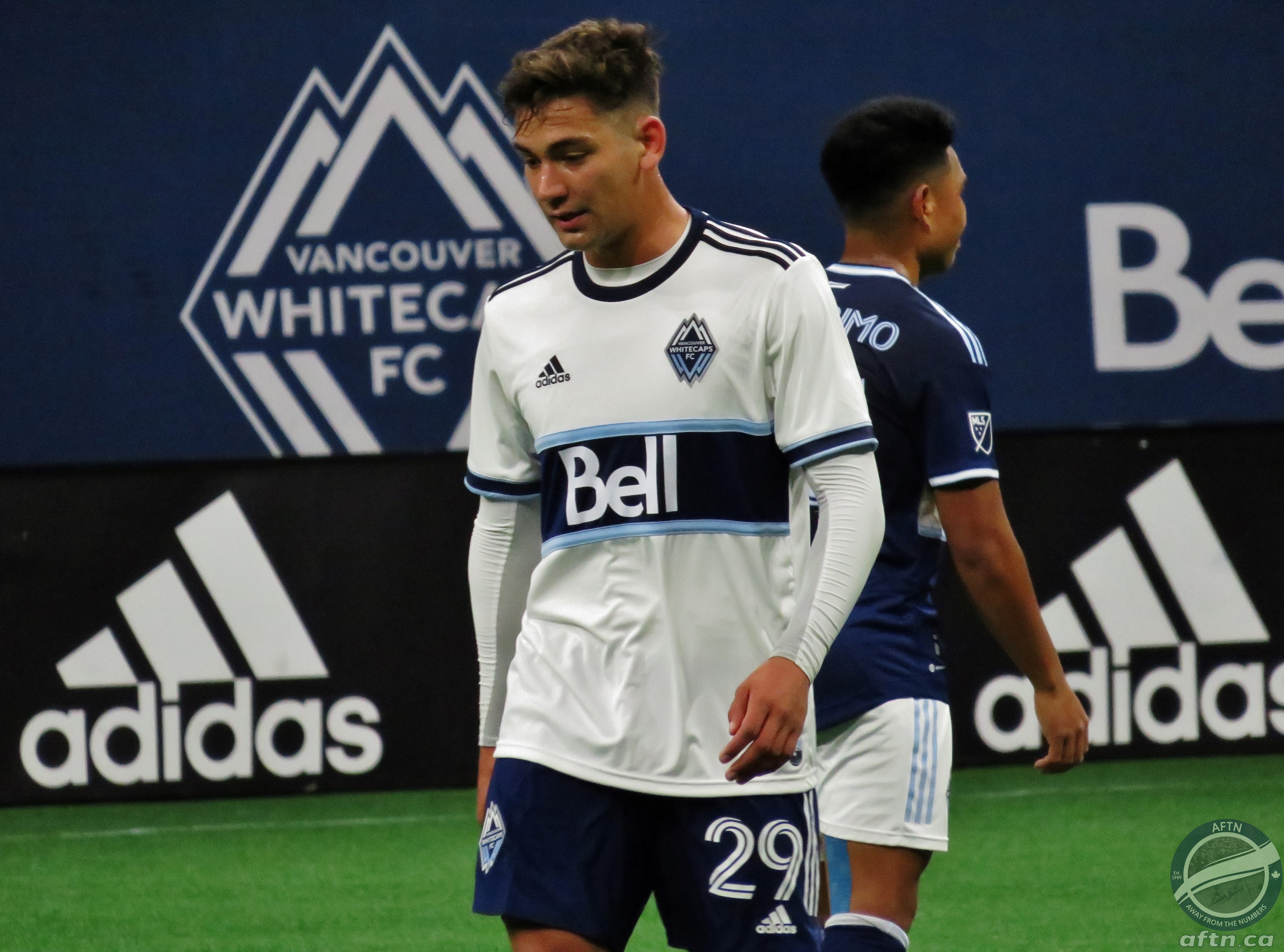 The Whitecaps first pick in the 2022 MLS SuperDraft was 22-year-old forward Simon Becher. Selected 16th overall, Becher had impressed as a goalscorer during his four years at college and the ‘Caps saw his potential at the next level.

Originally going to Holy Cross University for his Freshman year in 2018, Becher scored seven goals and added two assists in his 17 appearances, before transferring to Saint Louis for the final three years of his degree and college career.

Becher’s goalscoring prowess continued with the Billikens, where he scored 21 goals and recorded 13 assists in his three seasons and 47 appearances. His final season in Saint Louis saw Becher finishing tied for first in NCAA goal contributions with 14 goals and 10 assists, which included goals in nine straight matches and a goal or an assist in 11 straight games.

His exploits saw him named a First Team All-American by the United Soccer Coaches, Atlantic 10 Conference Offensive Player of the Year and First-Team All-Conference, Top Drawer Soccer First Team Best XI, and he was a Hermann Trophy semi-finalist.

Becher came through the youth ranks with Oakwood Soccer Club, playing with them from the age of 13 and going on to score over 70 goals in his time there, guiding them to a USSDA U16 Northeast Division Championship in 2016, where he was also named to an Eastern Conference Best XI.

There was no way that football wasn’t going to be in the future of the 6-foot-1 Brooklyn, Connecticut native. It runs very deep in his family with both of his parents playing collegiately for Missouri S&T Miners. His grandfather Bill is in the St Louis Hall of Fame, as is his uncle Bill, who had a 13 year professional playing career, managed Harrisburg City Islanders for 14 seasons, and is now involved in the youth side of the team, now rebranded Penn FC.

Becher has been called into US national team camps on three occasions, the most recent of which was a U20 camp in 2019. He also has two seasons of USL2 experience under his belt, playing for Reading United in 2019, where he scored seven goals in 10 appearances, and Ocean City Nor’easters in 2021, where he scored 12 goals in 14 appearances and was named to the Eastern Conference XI.

Becher clearly has an eye for goal and you have to feel he will be a key component to the WFC2 attack this season. This is his highest level to be tested at yet, but he already has an assist to his name in the preseason friendly against Valour FC. More to come in both the goalscoring and assist department? You’d certainly expect there to be when you look at the previous numbers, but the pro game can take a little bit of time to adjust to. 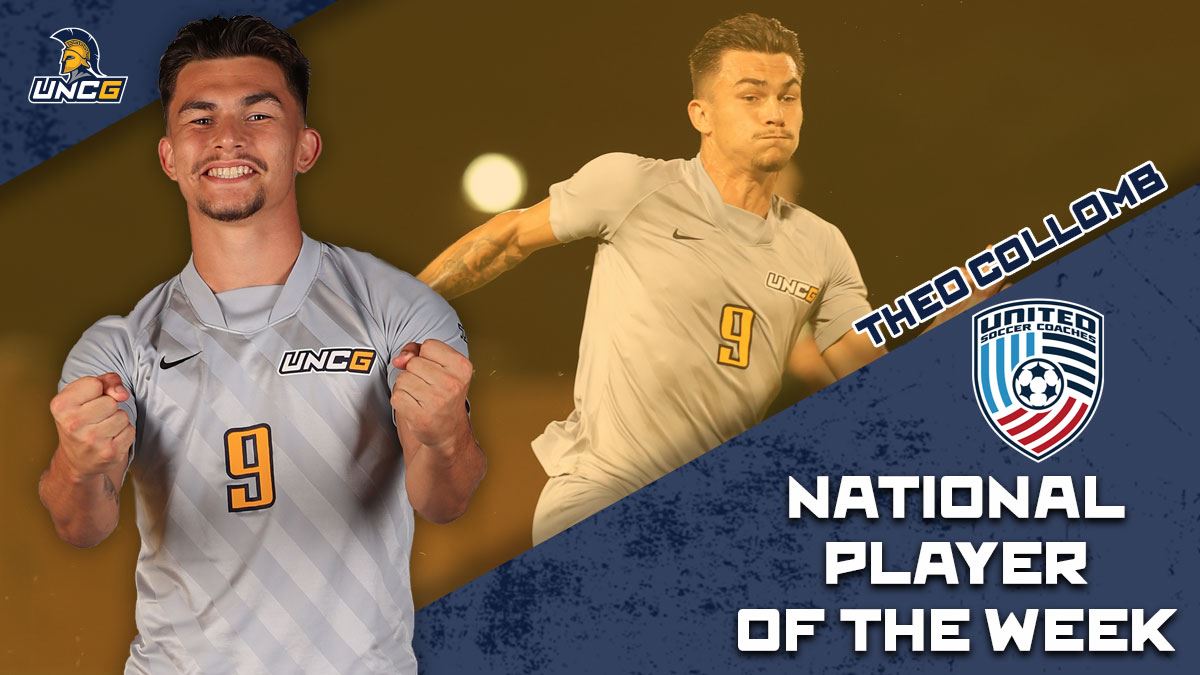 Another forward with a proven eye for goal, 21-year-old Frenchman Theo Collomb was the Whitecaps fourth pick in the 2022 MLS SuperDraft, selected 72nd overall.

A native of Clermont, France, Collomb has played just one year of college soccer for the University of North Carolina Greensboro in the NCAA, but two seasons due to Covid disruption. His Freshman spring season saw him start all 14 matches for the Spartans, scoring eight goals and earning co-Southern Conference Freshman of the Year and All Southern Conference First Team honours.

The fall sophomore season saw Collomb start all 17 matches for the Spartans and he finished the regular season leading the NCAA with 15 goals, 1.00 goals per game, and 35 overall points, helping UCNG win the Southern Conference championship. In amongst those goals was Collomb’s first career hat-trick against VMI in September, five multi-goal games, and three game-winning goals.

Collomb’s exploits saw him named Southern Conference Player of the Year and to the United Soccer Coaches All Region First team, earning him an invite to the MLS showcase, where he clearly impressed the Whitecaps enough to select him. You have to feel that his international status put a number of clubs off picking the talented French forward, as mock drafts had him going in the first round, so he could be an absolute steal for Vancouver.

Collomb isn’t your usual player available in the draft, he has a solid footing in the game at a high level over in Europe, having played three seasons on the second team of French club Clermont Foot 63, starting 15 of his 30 appearances and scoring nine goals.

He could be the real surprise package of the four draft picks and I’m looking forward to seeing what he can do in the blue and white. 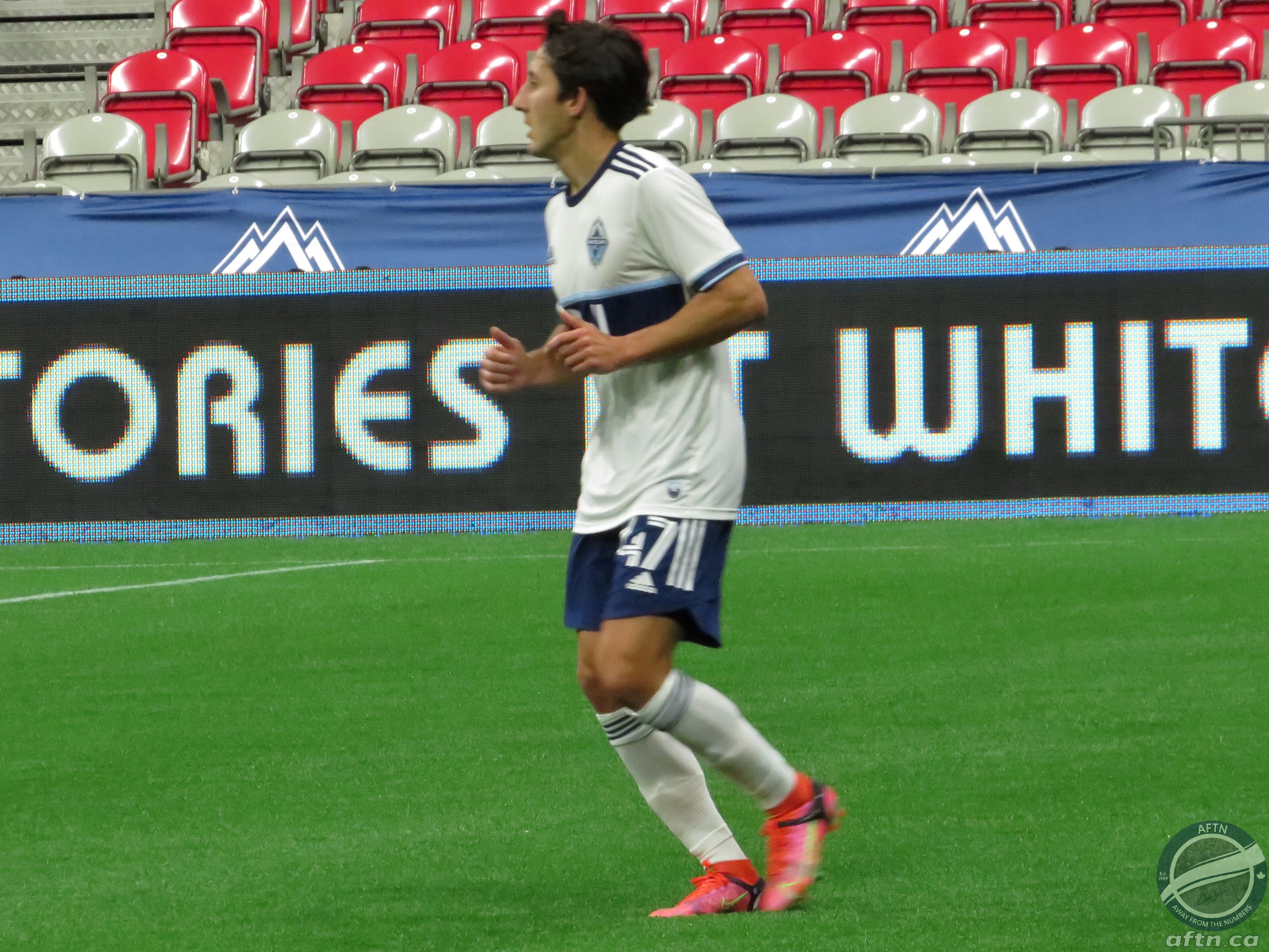 Originally hailing from Guayaquil, Ecuador, Luis Felipe Fernandez-Salvador was the Whitecaps first pick of the second round of the 2022 MLS SuperDraft, selected 44th overall.

Heading to Vancouver from NCAA 2021 national champions Clemson, 22-year-old Fernandez-Salvador finished his collegiate career with 11 goals and 14 assists in 69 appearances and 51 starts.

After finding the net just three times over his first three college seasons for the Tigers, Fernandez-Salvador had an explosive senior year, scoring eight goals and tallying five assists, including two goals in the playoffs, efforts that saw him named to the College Cup All-Tournament Team.

After emigrating to the US with his family in 2016, Fernandez-Salvador played his youth football with Minnesota based Shattuck-Saint Mary’s in the USSDA.

Fernandez-Salvador can play as both a central and an attacking midfielder. He got the start in the recent Blues v Whites game at BC Place and friendly with York United.