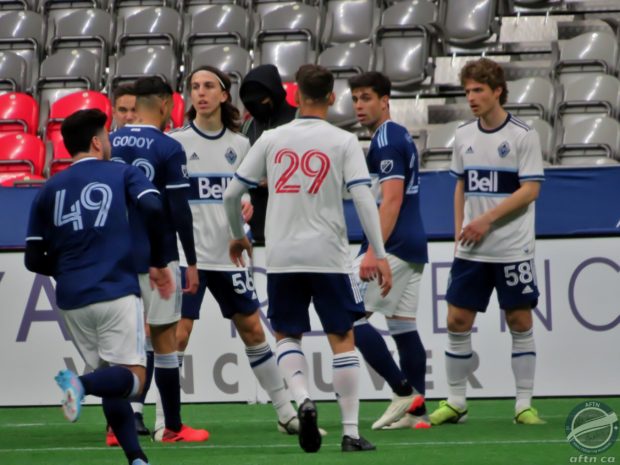 We’re running a series of articles profiling the squad in the build up to the season kick off, and we’ll be bringing you coverage of the team and the league all season long.

If you missed the first three, check them out:

This time around we look at six more that have just inked their new deals. 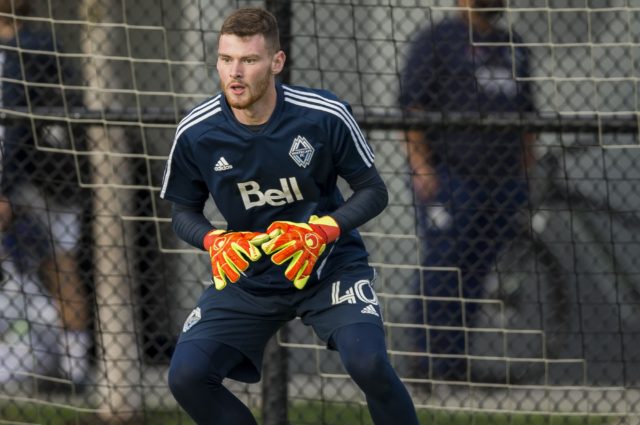 Arguably, the greatest continuing success story in the Whitecaps academy has been their conveyor belt of goalkeeping talent, and Ben Alexander is another in this long line.

Alexander joined the Whitecaps academy in August 2016 as a 13-year-old, playing the 2016/17 season with the U14s before moving up to the U15s the following season, where made 15 appearances as the young ‘Caps won the USSDA Northwest Division title.

Working through the age groups and playing at higher ones a number of times, Alexander is still just 18 and has spent this past winter season playing with the Whitecaps U19 side in the Fraser Valley Soccer League (FVSL) Premier Division, sharing minutes with fellow keeper Max Anchor. Both of them recorded three clean sheets.

The Chilliwack native played his youth football with Chilliwack FC and Fraser Valley FC before making the move to the ‘Caps.

Alexander played in the recent preseason friendly against CPL side York United, keeping a clean sheet, and he has signed an amateur contract with WFC2, which would allow him to keep his college eligibility if he decides to go down the NCAA route. 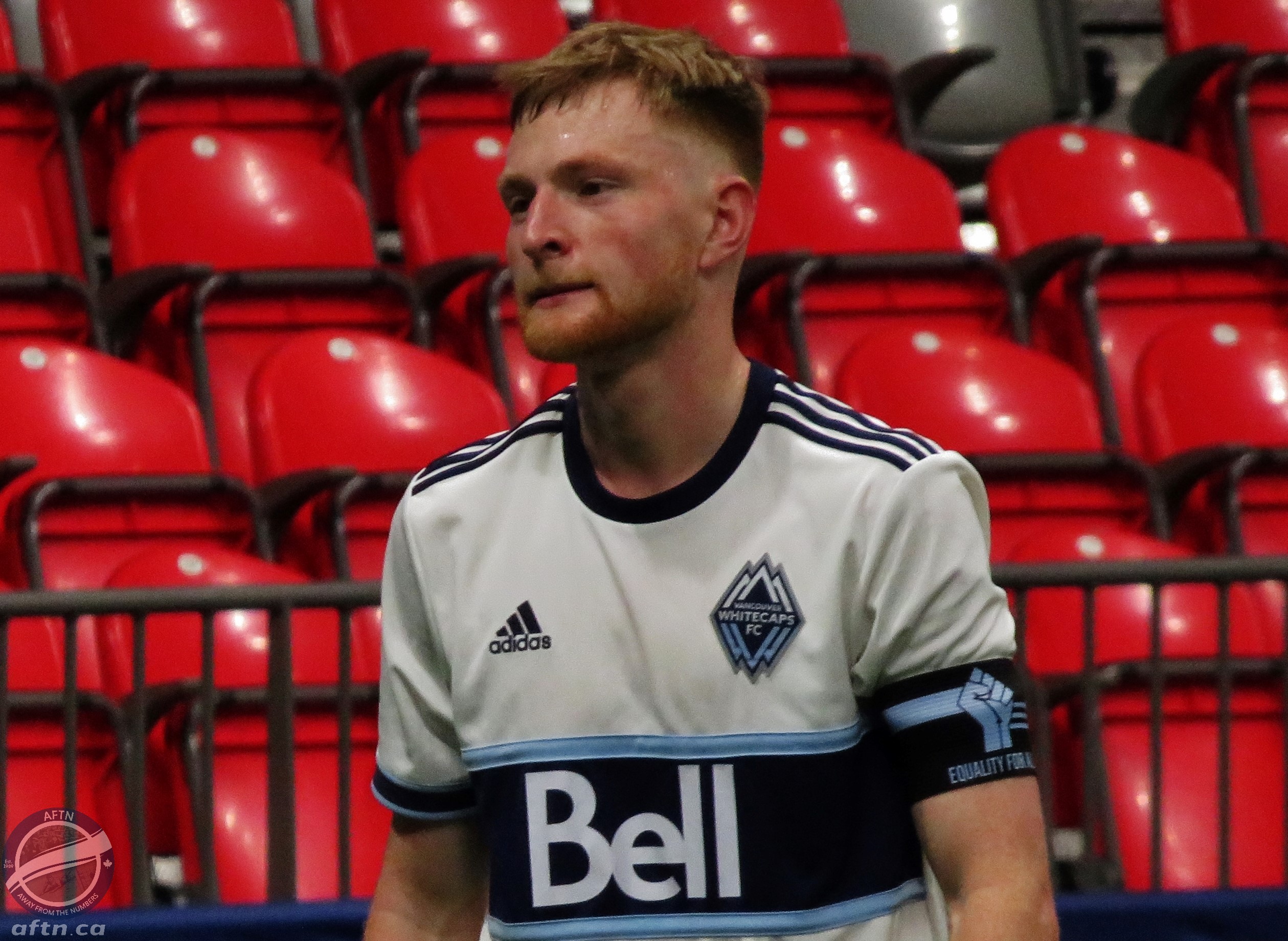 Of all the players signed to WFC2 deals, 20-year-old centre-back Cristian Campagna is certainly right at the top of the pecking order to sign the next MLS homegrown deal with the ‘Caps.

We’re very high on Campagna here at AFTN and this season is an important one for the academy alumni’s development and how he performs at the next level after impressing in both the youth and college ranks.

Campagna joined the Whitecaps MLS academy as a 13-year-old in August 2015 after catching the eye with Surrey United in the BCSPL, where he started playing at the age of four and was selected for the Western Canada side at the Danone Nations Cup national final in 2013.

Campagna played for the Whitecaps U16 side in the 2016/17 season, playing eight games, just one of them starts, before coming into his own with the U17s the following two seasons, making 57 appearances, all but two of them starts, and scoring seven goals.

After a Covid curtailed 2019/20 USSDA season with the U19s, Campagna headed to college at the University of Albany, majoring in Business Administration. He played in all nine matches for the Great Danes in his Freshman year and was named to the America East All-Rookie XI and the FTF All-Canadian Freshman XI.

After a year at college, Campagna returned to the Whitecaps fold in 2021, signing with the U23 development squad.

Campagna was part of a Canadian national team U15 identification camp in 2016, but more recently, and intriguingly, Campagna has been a training player at a number of the national team camps ahead of the World Cup qualifiers, which is not only fantastic experience for him but a testament to his talent.

Campagna has been a key player for the U23 in their series of friendly matches over the past year, captaining the side and marshalling the defence. This will continue into MLS Next Pro, and with his brother Matteo, who is on a season long loan to WFC2 from the first team with an option to recall, we’re going to see a Campagna brother backline and we can’t wait. 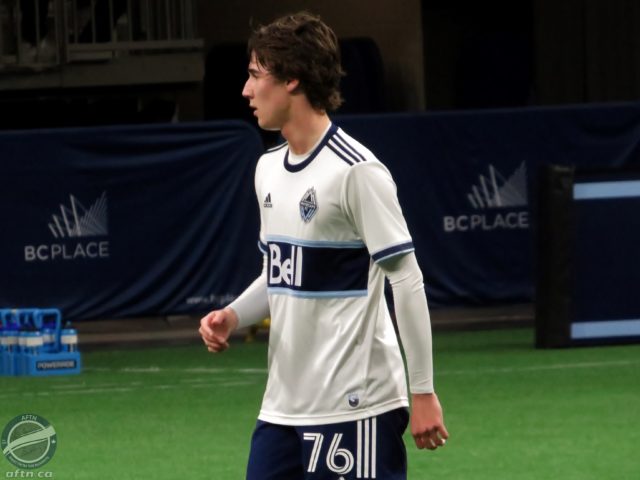 It’s been a long road travelled for Joe Hanson. The 18-year-old from Whitehorse became the first Yukon player to sign a professional deal after inking a WFC2 contract this month, but his journey has taken him from the northern territory to Vancouver Island, the lower mainland, and even to US as he chased his footballing dreams.

Hanson’s youth career saw him start playing with his dad Jake’s Total Soccer Excellence Academy in Whitehorse as a 5-year-old and it wasn’t long before he knew he want to be a professional footballer, moving on to the Yukon Junior Selects.

It was a dream his family supported, and to further those ambitions Hanson was a guest player for an Alaskan team before heading south to play with the Crossfire Premier in select games, winning Washington State championships with the team at U10, U11, and U12 levels between 2014 and 2016, all the while still playing with Yukon Strikers Selects.

Hanson played for the Yukon Selects at the Canada Soccer National U15 Championships in Quebec in 2018, where he scored a couple of goals on the way to the team’s 7th placed finish, a historic high for a team from the territory.

Hanson was soon on the move again, this time to British Columbia where he joined BCSPL side Vancouver Island Wave in May 2019, helping their U16 side to a BC Soccer Premier Cup the following month.

Hanson, who can play as a forward and an attacking midfielder, then came to the Whitecaps MLS academy in August 2019 at the age of 15, soon moving up the ranks and has been a part of the U23 developmental squad since May last year. With an impressive goalscoring record at every team and level he’s played, it’s going to be interesting to watch how Hanson fares at his highest one yet. 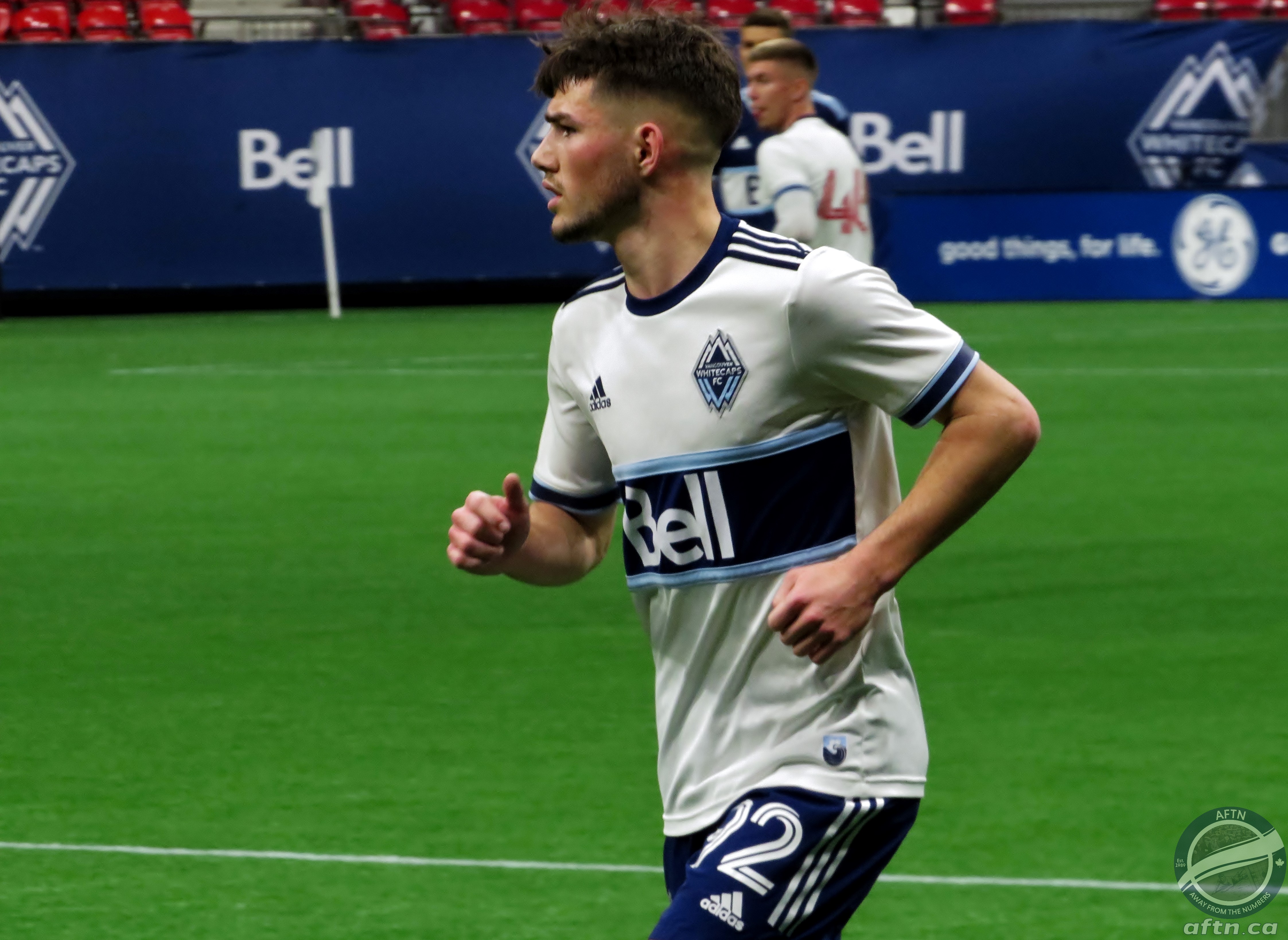 After playing his youth soccer with BCSPL side Surrey United, Jay Herdman made the switch to the Whitecaps MLS academy in August 2017 at 13 years of age. Four and a half years later, after moving up through the ranks from U13 to U19 level, the midfielder has signed his first professional contract with WFC2.

The son of Canadian national team head coach John, Herdman has got where he is on his own merit, impressing many as he’s moved through the age group at youth level and now looking to cut his teeth in the adult game.

Jay Herdman scored the other, putting it outside of the keeper's range 🔝 pic.twitter.com/JsBturCxc2

The attacking midfielder, who can also play in the forward positions, has a sweet right foot on him as you can see from the two goals above. Take a bow after those two strikes!

Can we expect more of the same in MLS Next Pro? While an exciting talent, it should be remembered that Herdman is still only 17 and will be one of the youngest players on the WFC2 roster. I expect him to get a lot of playing time, but he’s been playing with the U19s in the FVSL Premier Division this past winter season, scoring one goal, so I also wouldn’t be surprised to see him get minutes for the ‘Caps in L1BC as well.

Herdman has been involved in the last two Whitecaps preseason camps, playing in the match against Indy Eleven last year, and played in a number of friendlies for the U23s. This year has seen him feature in all of WFC2’s preseason matches, scoring the opening goal in their 3-2 loss to Valour FC last week. 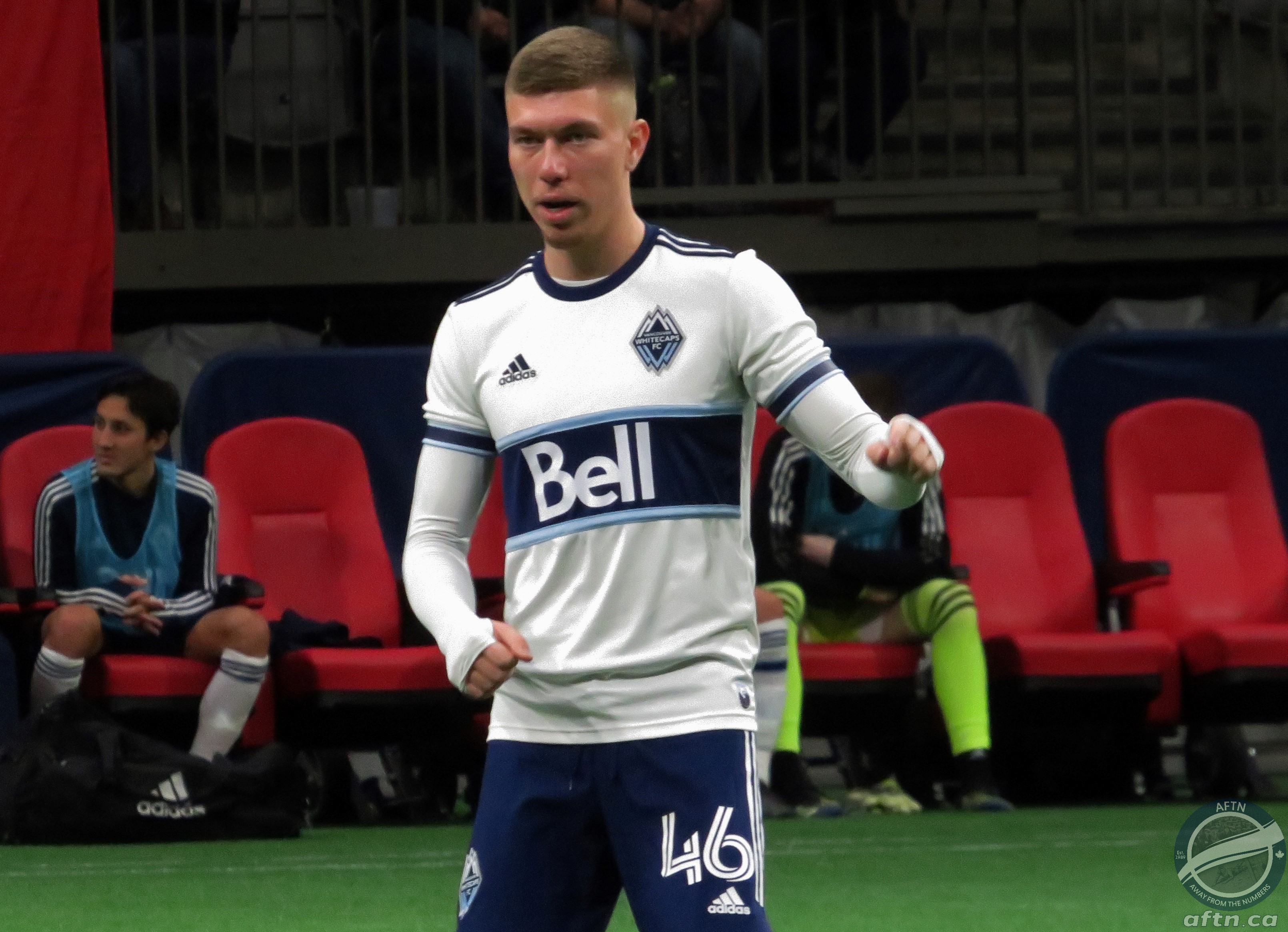 Filip Rakic has been playing football since the age of five with the New Westminster Tigers soccer academy. And he returns to the Whitecaps fold having first joined their academy as an 11-year-old back in 2012 after impressing with the Italian Canadian Sports Federation youth sides.

Now 21, the Serbian born attacker has been playing the last couple of years in the local leagues, where he once again caught the Whitecaps’ eye after a string of strong performances.

Rakic left the Whitecaps academy after a couple of seasons to join BCSPL side Fusion FC, where he was selected to take part in a Canadian national team U15 identification camp in Burnaby in 2015, before moving on to play for Coastal FC.

Rakic has already had an impact for WFC2 in their recent preseason friendly against Valour FC, scoring the second Whitecaps goal in a 3-2 loss, and also featured in the game against York United and the recent Blues v White intrasquad match. 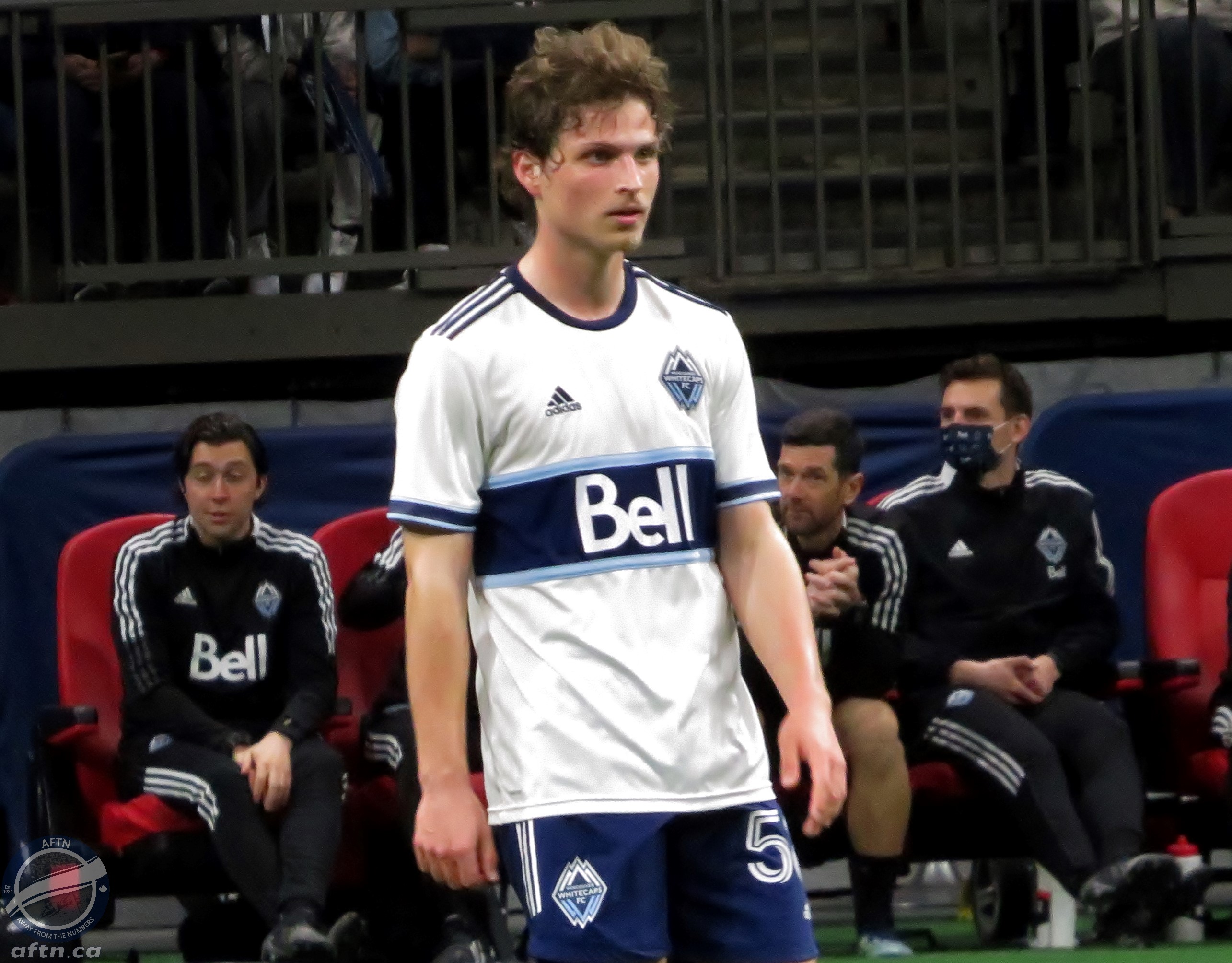 A versatile player who can play both as a defender and a midfielder, 19-year-old Eric White has been part of the Whitecaps academy since August 2016, and has been playing more as a winger as he has moved through the ‘Caps system.

The Coquitlam native came through the Coquitlam Metro-Ford ranks in the BCSPL prior to joining the ‘Caps and was described by U17 head coach Rich Fagan as a “David Beckham style wide player” ahead of the USSDA playoffs in 2019.

White was a key part of the Whitecaps U15 side that won the USSDA Northwest Division title in the 2017/18 season, scoring eight goals in 22 appearances, 21 of them start. Moving up to the U17s the following year and for the curtailed 2019/20 season. He won the male Academy Player of the Year award in 2020.

He’s also been keen to share his soccer knowledge with the kids coming through and has helped with coach camps for both the Whitecaps and Coquitlam Metro Ford.

White started the recent WFC2 friendly loss to Valour FC and the Blues v Whites intersquad game and has been involved with the U23s for a couple of years training with the first team on a number of occasions. He’s signed an amateur contract with WFC2, which would allow him to keep his college eligibility if he decides to go down the NCAA route.