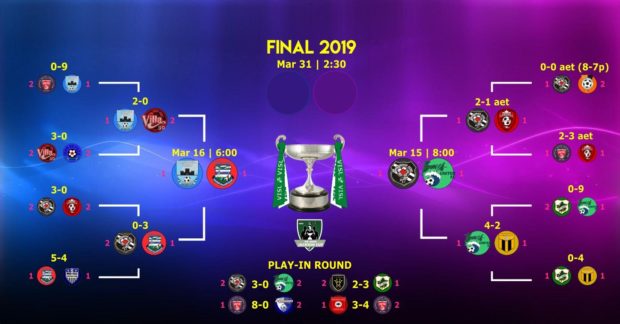 It was an exciting weekend of VISL Jackson Cup quarter-final action, setting up what are sure to be two highly competitive semi-final games. Here’s how it all played out.

Friday Night started off with the Game Of The Week in the all-Division 1 clash between Bays United and Cowichan FC, and a shock was in store with Bays grabbing the 4-2 win, beating Cowichan for the first time this year and spoiling thoughts of a league and cup double for the league leaders.

Underway here at @OakBayHigh as Bays Utd host Cowichan in #VISL #JacksonCup 1/4 Final action. 7’, teams have said hello with a couple hard tackles, the #GOTW has some heat. 0-0. pic.twitter.com/rBbK3fnm1A

The game had several great goals, with one by Bays’ Alex Redpath being noted as the potential Goal of the Year. Bays started a first half goalfest off with the beauty from Redpath 13 minutes in, only for Craig Gorman to tie things back up again with a beauty of his own five minutes later. Justin Donaldson (who was named Man of the match) scored a brace in the 24th and 29th minutes to put the home side firmly in control.

When Adam Ravenhill rounded out the Bays scoring five minutes into the second half, the surprise was on, and a last minute own goal was all that Cowichan had in reply as Bays clinched their spot in the semis in style.

An exciting match with some solid tackles, beautiful goals, and end to end action.

Friday night also saw the battle of Saanich as Gorge FC hosted Lakehill FC at Hampton Park. Tied at one at the end of the 90 minutes, the game needed extra time before Gorge grabbed a late winner for the 2-1 victory.

The game itself was an odd one. Lakehill were moments away from winning the match after Daniel Roke had fired them ahead in the 56th minute. But somehow, like the Provincial Cup final last year that saw a VMSL team defeat a FVSL team in the dying moments, an equaliser was scored at the death to send the game into extra time.

Anton Bucher was the hero with the 90th minute leveler, and Gorge’s joy was furthered when Dominic Colantonio grabbed the 112th minute match winner to complete the comeback and knock out their cross town rivals.

Both teams were on the upward swing, especially Comox who started out the campaign in horrific fashion, but have had a remarkable 2019. They kept the streak going, defeating Gorge United by a 3-0 scoreline. Grayson Chalifoux opened the scoring for Comox in the 40th minute, before goals from Joe Butcher ten minutes into the second and a 76th minute third from Nick Marinus put the tie to bed. Earning the clean sheet for Comox was permitted youth player, Diego Alvarez.

The final game of the weekend saw Westcastle United of Division 1 see off their Division 2 visitors Powell River Villa 2-0. Both teams are near the top of their respective divisions, and this was an interesting game to take in.

Powell River came into town and had the gameplan of defend defend defend. No doubt they were trying to keep the young Westcastle squad contained as they were heavily loaded on the backline and only went forward on occasion.

Westcastle looked to be stymied, but their constant pressure and patience paid off as they finally scored minutes before the game came to a finish. Alec-Michael Petrizzi put Westcastle ahead in the 87th minute, before standout player, and Division 1 MVP candidate, Joshua Walter closed things off two minutes later.

Powell River did come ever so close to scoring on a couple occasions, but earning the shutout for Westcastle was Sachdev Grewal.

So the semi-finals are all set, and here is what the bracket looks like after this past weekend of play: