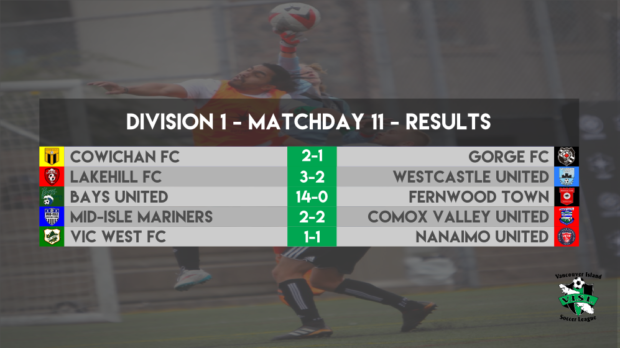 Week 11 has passed us by, and there were plenty of interesting story lines in the top flight of the Vancouver Island Soccer League Division 1, as Bays United ran up the goals and the weekend finishes with just two points separating the top three teams in the title chase.

Here is a quick snapshot of what happened:

Friday night at Sherman Road Turf saw Cowichan edge out Gorge 2-1 thanks to goals from Stevan Zoric and returnee Craig Gorman. Mike Moon had the lone marker for Gorge.

In the ‘Game Of The Week’, Lakehill edged out Westcastle United 3-2. It was a very nice individual effort by Goteh Ntigness as he scored a pair for Westcastle, but the Reds came away with all three points after goals from Wesley Barrett, Blair Sturrock, and Keegan Lang. Man of the Match honours went to Lakehill’s Sturrock.

A lop sided match in Oak Bay had Bays United defeat a shorthanded Fernwood Town by score of 14-0. Bays keeper Andrew Flello had the clean sheet, and was not too busy, as the home side saw Patrick Nelson hit five, James Rhodes grab four, Adam Ravenhill bagging a brace, and further goals by Manny Straith, Craig Robertson, and Brandon Wallace.

In what almost turned out to be a huge upset in Ladysmith, league leaders Mid-Isle Mariners needed a last minute Matt Arnett goal to salvage a point in a 2-2 draw with Comox Valley United, clinging on to first place in the standings as a result. Ryan Andre hit Mid-Isle’s other goal, with Darren Bergh and Travis Brown getting on the scoresheet for Comox.

The final game of the weekend saw Vic West and Nanaimo United draw 1-1. Vic West’s goal was by Nic Budisa, who has been a welcomed addition to the green and white, with midfielder Matt Mehrassa getting on the scoresheet for the visitors. The draw dropped Nanaimo down into third place in the table, with Lakehill moving up to second after their win, and they’ll be rueing their missed opportunity to take over top spot.

Here are how the standings and chase for the Garrison Cup look after a weekend with some unexpected results: 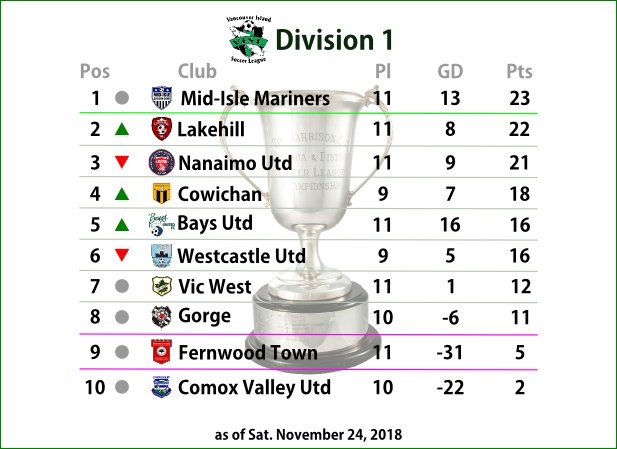 A lot of goals on the weekend, especially from Bays, changes how the Golden Boot for Division 1 is shaping up. Here is how the top 5 now look: 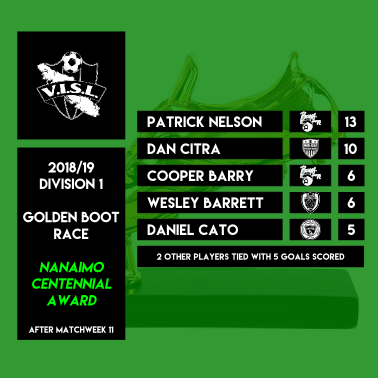 Coming up is the second to last weekend of local amateur soccer for Men for 2018, and it should be an interesting one. Here is what’s on the card for this weekend’s Division 1 soccer: 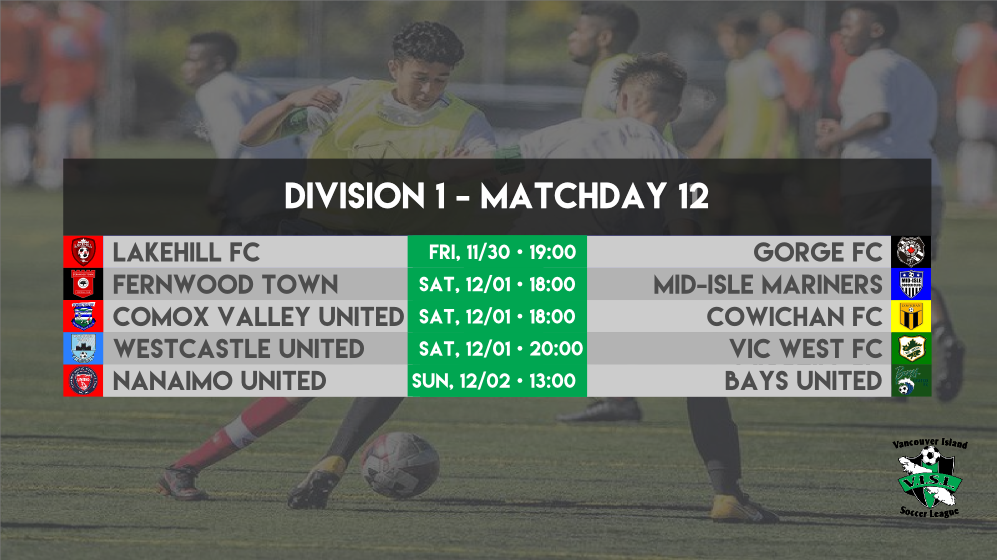 Friday night starts off with the battle of Saanich as Lakehill and Gorge meet up at Braefoot Park.
Lakehill will look to carry on with their great result last week, and Gorge will try to get a win after a tough loss to Cowichan.

Fernwood will be in tough as they battle top of the table Mid-Isle and coming off their worst result ever, while Mid-Isle is coming off a hard fought, last minute draw versus Comox, eager to keep their first place in the division.

Comox and Cowichan will battle at Vanier. The two always seem to match up well. Comox seems to have rejuvenated a bit, but will they be able to keep it going against a determined Cowichan team who are right in the mix of things?

Westcastle will look to bounce back after their loss to Lakehill when they face a tough Vic West team who seems to be trending the right way of late. The greens are in all their games, but will they be able to keep up with the pace of the young boys?

The final game of the weekend will have Nanaimo host Bays Utd at Merle Logan. Nanaimo seems to be down with some injuries, but should prove to be a much tougher match for the Oak Bay squad.