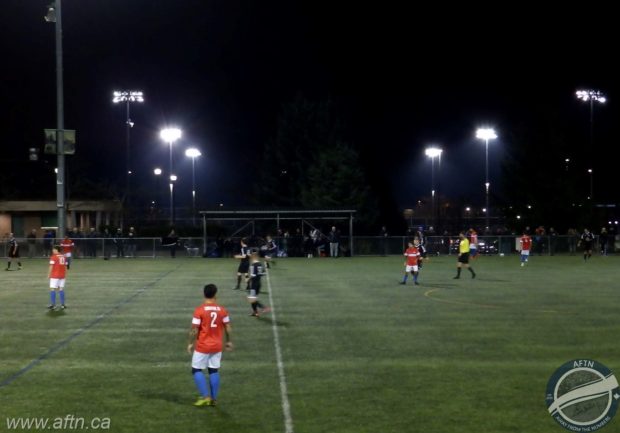 West Van FC finally took advantage of another slip from Rino’s Tigers to take over first place, but have Croatia SC breathing right down their necks, with three points now separating the top six sides, as the league moves into the second half of the 2018/19 season.

The weekend got underway off the pitch as the fallout from last week’s 17-1 shellacking of Campo Atletico continued, seeing the bottom side forfeit their game against Coquitlam Metro Ford Wolves and their future not just in the division, but in the VMSL, hang in the balance.

That forfeit, and the subsequent three points that were awarded to Metro Ford, sees the 2015/16 and 2016/17 champs now move to within three points of the top, with a game in hand.

From the matches that were played, there were a lot of goals and a further tightening of the standings logjam.

That tightening was most evident in the fall of long time leaders Rino’s Tigers, whose 1-0 defeat to Pegasus SFC in Surrey on Friday night saw them drop from first to fourth, having now taken just one point from their last four matches. And it was a former Tiger, Daniel Sagno, who did the damage, scoring the only goal of the game in the 56th minute.

The victory also gives the Horsemen a little bit of breathing space in the relegation battle, moving them five points clear of the drop zone.

Taking full advantage of Rino’s slip were the team that beat them last weekend, Croatia SC. The Croatians moved temporarily into first place after a comfortable 5-0 dismantling of NVFC Norvan at Burnaby Lake on Friday night and a Mark Malamura hat-trick. 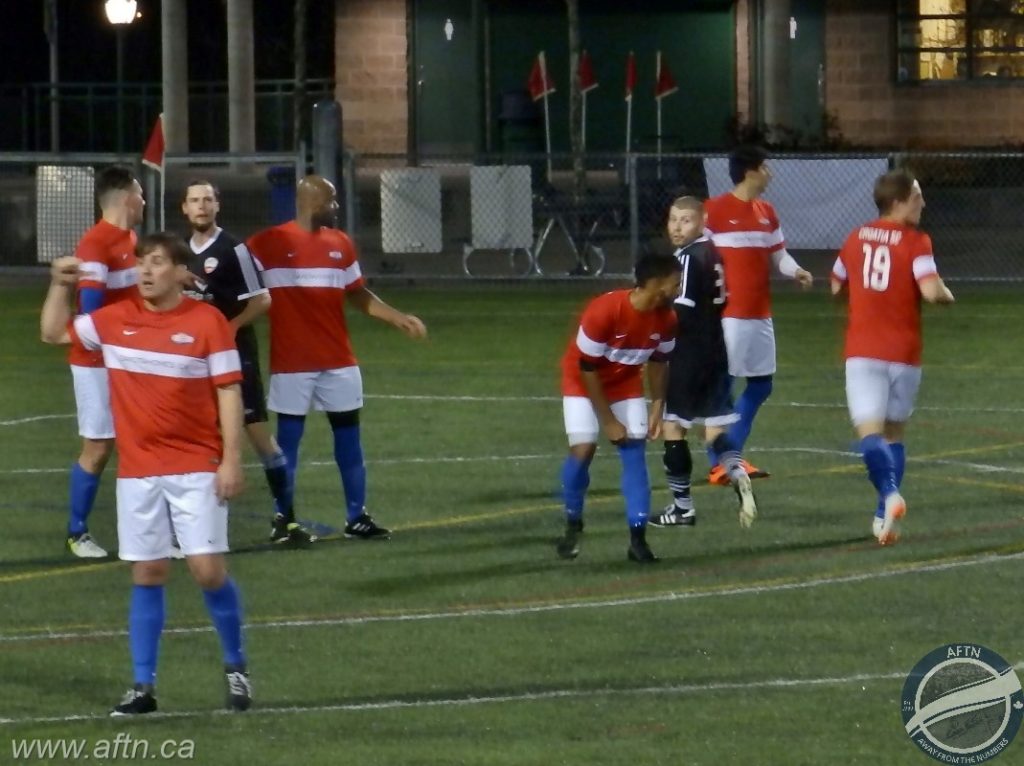 Croatia were in control from the start, taking the lead through a looping Malamura effort four minutes in that caught the Norvan keeper a little off his line, with an earlier similar effort just flying over the bar. And Malamura doubled Croatia’s lead in the 20th minute with another excellent finish after a quick counter from Croatia saw his brother David play a fantastic cross field path in his path, where he chested it down to volley another dipper over the keeper.

Milan Gandesha killed the game off as a contest just before half time, and it was another nice finish, as he flicked the ball to make room for himself to volley home Croatia’s third. Second half goals from Malamura, five minutes after the restart to complete his hat-trick, and Emile Saimovici, who ran onto a long through ball midway through the second half, saw Croatia go nap, and likely put an end to any title aspirations, or hopes, that Norvan may have had.

You can see the second, third, and fifth goals in our video highlights below:

Friday night’s final game saw another comfortable win for a title contender, with CCB LFC United heading to Minoru Park and dispatching of Richmond FC Hibernian 3-0 thanks to another two goals from former WFC2 player Victor Blasco and Milad Mehrabi’s 12th goal of the campaign.

The win saw CCB finish the weekend in third, two points off top spot, while Richmond’s 10th defeat of the season sees them still in the second relegation spot, three points adrift of Guildford FC, who have a game in hand.

Guildford themselves dropped a close one 1-0 to Club Inter EDC Burnaby on Saturday night at Newton, with Chris Kyd getting the only goal of the game a minute before half time.

Rovers Tigers were coming off the back of that monumental demolition of Campo the week before and looked to be sitting pretty in the table after three straight wins and having two games in hand.

West Van, meanwhile, were looking to finally reach the summit after squandering previous opportunities with three straight 1-1 draws. This time they got the job done, with Keith Jackson’s hat-trick heroics giving the Amblesiders a 3-2 victory and first place in the Premier standings.

Ryan Dhillon had fired the Surrey side level on the half hour mark, after Jackson’s 11th minute opener, but the home team were 3-1 up by the 58th minute. Nick Soolsma pulled one back just past the hour mark, but Rovers Tigers couldn’t find a late leveller and finished the weekend 7th in the table, six points behind West Van, but still with two games in hand.

Here’s how the full Premier Division table is looking after the Week 12 matches: 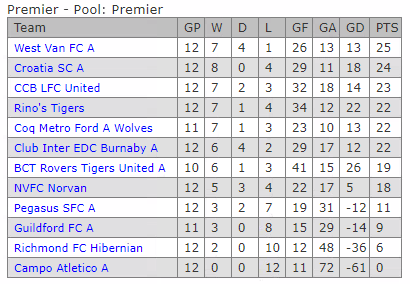 It’s all shaping up to be an absolute cracking run-in to the season. BCT Rovers Tigers United host Croatia SC at Newton on Friday night (kick off 8.40pm) in what looks to be the ‘Match of the Week’. You can find all of this weekend’s fixtures, and all the results and standings across all seven VMSL divisions over on VMSLsoccer.com and catch all the local soccer banter on the Take The Piss forums.

Get out if you can this weekend and enjoy some local soccer action.