We thought Division 1 might end 2018 with a bang, and that is exactly what happened, with a lot of drama and movement over the last weekend of matches before the Christmas break.

Here is a breakdown from the weekend:

Friday started with a bang as Cowichan came down Island and defeated their friends from Bays United 2-0 at Oak Bay High School. Colin Knight and Kevan Brown scored the Cowichan goals, while earning another clean sheet was Darian Achurch.

Late drama was the story at Hampton Turf as Gorge snuck in a draw against Nanaimo United. Daragh Fitzgerald grabbed Nanaimo’s goal, with Tony Litke firing home a 90th minute equaliser from the penalty spot.

Saturday started off with Westcastle hosting Comox at Westhills, defeating them 6-0. Jonathan Walter, Keenan Colley, Goteh Ntignee, Spencer Schrader, and a brace from Simon Stacey saw Comox come away with all three points in their big win. Earning the clean sheet for Westcastle was Sachdev Grewal.

Saturday night saw the VISL Game Of The Week in Ladysmith as second placed Lakehill headed there to take on long time league leaders Mid-Isle Mariners. The game did not disappoint and Lakehill came out with a 2-0 win to take over top spot and finish the year in first place in Division 1. Lakehill’s goals came from Keegan Lang and Thomas Mallette, while earning the clean sheet, and having a busy night, was keeper Hardeep Gahunia. Man Of The Match honours went to Lakehill’s Tarnvir Bhandal.

The last game of the weekend saw Fernwood hosting Vic West, and the visitors came away with a 4-1 win.

So as we head into the Christmas break, here is how the chase for the Garrison Cup and Division 1 Championship is shaping up: 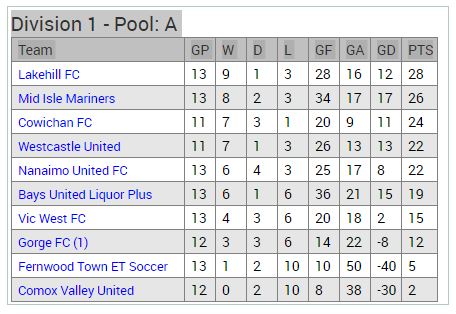 The big story is Lakehill jumping into 1st place, but not to be discounted are both Cowichan and Westcastle, who have two games in hand. 2019 should prove to have some interesting games and an exciting run-in.