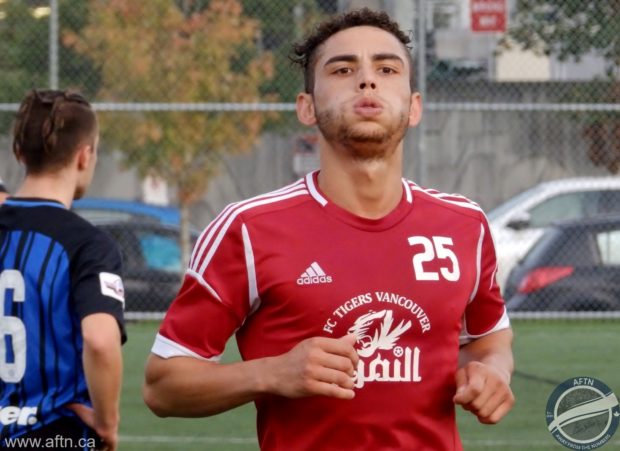 Last weekend’s Vancouver Metro Soccer League (VMSL) Premier Division action certainly wasn’t short of entertainment value, with the six games producing 35 goals between them, as the top three in the standings all consolidated their positions with some impressive wins and the battle to avoid the drop starts to look more like a perm two from three scenario with every passing week.

Joint leaders Croatia SC got the ball rolling at Burnaby Lake on Friday night with a 6-0 demolition of the still pointless Guildford FC. Kyle Kemp got the scoring underway in the 9th minute, before Emile Saimovici doubled the Croatians lead ten minutes later. That’s how it stayed till half time before the home side turned up the heat in the second thanks to a brace from Milan Gandesha and one apiece from Johnny Sulentic and Jason James.

There was a cracker of a match at Newton on Friday night as defending champs BCT Rovers Tigers United came back from their Challenge Cup triumph to play out an entertaining 4-4 draw with Club Inter EDC Burnaby.

Alex Marrello opened the scoring for Inter in the 12th minute before two goals in two minutes from Joey Brar and Nick Soolsma saw Tigers roar into the lead just before the half hour mark. Inter tied things up again five minutes before half time through a Rizal Ganief effort, and the team’s headed in at the break level at 2-2.

It was a wild start to the second half, with David Chohan firing Rovers Tigers back ahead in the 49th minute, only for Chris Kyd to level things up again five minutes later. Liam Miller put Inter ahead for the first time since the opening goal in the 71st minute, but the action wasn’t yet over and there was drama in the final minute as Pavi Dhillon earned a point for Rovers Tigers at the death and Jordan Michael was sent off for a second yellow. Great stuff!

The last of the Friday matches also took place at Newton with Pegasus SFC starting to find their feet after a shaky start, running out 4-0 winners of Richmond FC Hibernian. Rajan Dhadwal got the only goal of the first half six minutes in, before a second half hat-trick, in the space of 11 minutes, from Daniel Sagno (pictured below) saw the Horsemen comfortably ease their way to all three points. 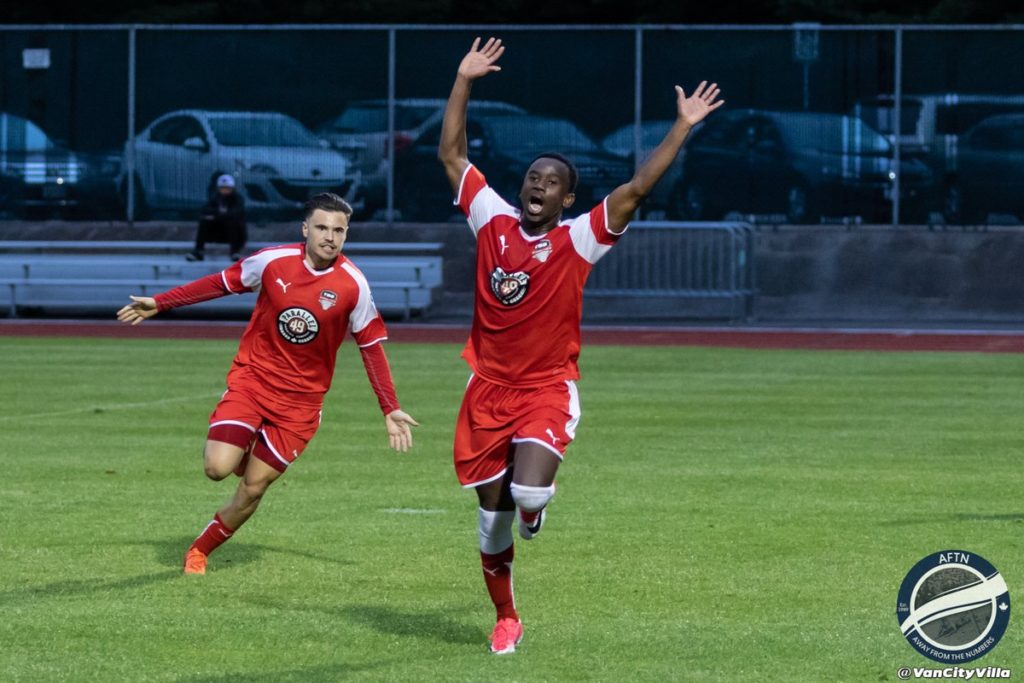 Sagno turned out for Rino’s Tigers towards the end of last season, and his former team were the big winners this past weekend, taking apart Campo Atletico 8-2 at Trillium on Saturday afternoon to stay out on top of the Premier standings.

Daniel Johnson opened the scoring in the 28th minute and Golden Boot leader Declan Rodriguez (main photo above) grabbed his first of the afternoon ten minutes later to give Rino’s a 2-0 lead at the half. Rodriguez grabbed his second two minutes after the restart before a brace from both Alberto Cirac-Perez and Erik Edwardson, and goal from Jan Posch had Rino’s 8-0 up and coasting by the 75th minute.

Tigers’ concentration maybe lapsed in the closing minutes as they allowed an 86th minute goal from Joshua Skurrey-Cradock and then another from Denis Ananga a minute later. Full credit to Campo for fighting till the end, but they are still looking for their first points of the season and now face a massive game when they host fellow relegation battlers Richmond FC Hibernian at Burnaby Lake on Saturday afternoon.

West Van FC stayed in touch with the top two after a hard fought 1-0 win over long time rivals Coquitlam Metro Ford Wolves at Ambleside. Shane Howard got the only goal of the game in the 56th minute, before things boiled over in the final minute after a stramash that saw West Van’s Paul Kelly and Tyler Leonard and Coquitlam’s Vito Iacobellis given red cards.

New boys NVFC Norvan continued their excellent start to the season in the final match of the weekend at Fen Burdett Mahon stadium, seeing off CCB LFC United 4-2 in an entertaining encounter.

Blake Burgon hit all four Norvan goals, including a first half hat-trick, with Yassin Essa scoring for CCB, along with a Norvan own goal. Danosh Askarpoor made CCB’s day worse when he picked up a second yellow card in stoppage time.

All those results leave the VMSL Premier standings looking as follows after Week 7’s matches. 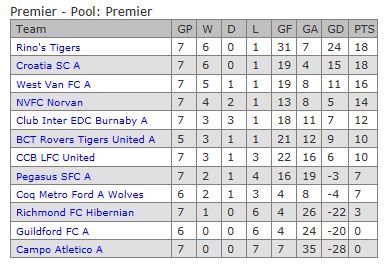 Unfortunately a cold bug that doesn’t seem to want to go away stopped us getting out to any matches for the last two weeks, but we’ll hopefully be back with some video highlights soon. In the meantime, you can find all the last VMSL results, standings, and fixtures across all seven divisions on VMSLsoccer.com