We never got a chance to bring you a weekly round-up right after the final Vancouver Metro Soccer League (VMSL) fixtures of 2019, so let’s remedy that now with the league in a Christmas break and have a look at how things are looking heading into 2020.

The Premier Division title chase is still a four horse race with seven round of fixtures remaining. Defending champions Croatia SC hold a two point lead at the top over Rino’s Tigers, with West Van FC a further point back and 2017/18 champs BCT Rovers Hurricanes four points off first place in fourth.

Croatia SC rounded off their decade’s fixtures to stay at the top in style, coming away with a strong 5-2 victory at home to Burnaby Selects White Eagles at Burnaby Lake on Friday December 13th.

A Quintin Desaulniers double in the 1st and 20th minutes had Croatia sitting pretty early and Daniel Davidson made it 3-0 nine minutes before half time. Emile Saimovici made it four just before the hour mark before Alex Roe pulled one back for the White Eagles midway through the second half. Patrick Ruszczyk saw Croatia go nap in the 80th minute, with Vladyslav Matlash rounding off the scoring to grab a second for the White Eagles a minute later.

Rino’s Tigers kept up the pressure at the top with a 2-1 come from behind win over NVFC Norvan at Trillium the following afternoon.

Anthony Paiero stunned the home side by putting Norvan in front within the first minute, but Rino’s fought back and Kyung Hun Gee levelled with a nice finish from the edge of the box four minutes before the break.

But any thoughts of the teams heading in level were quickly dispelled when Rino’s took the lead a minute before half time through the Golden Boot leading Farivar Torabi, whose fantastic first time volley from the edge of the box took his tally for the season to 19 and secured all three points for the Tigers.

Here’s both of the Tigers goals that we’ve stuck up on You Tube. Many thanks to Rino’s for sending these along.

That victory kept Rino’s two points back of Croatia at the top of the table and West Van also kept the pressure on in third with a hard fought 3-2 victory over Club Inter EDC Burnaby at Ambleside on Saturday December 14th.

Bryan Fong put Inter into an 8th minute lead before Eoin McCormack tied things up for the home side six minutes later. That was how things stayed until three minutes before the hour mark when McCormack hit his second of the afternoon to give West Van the lead. Paul Kelly then secured the three points for the Amblesiders with 12 minutes remaining, although Fong made them sweat a little with his second of the match six minutes from time, but West Van held on for three huge points.

After dropping two big points the week before to fall behind in the championship race, BCT Rovers Hurricanes got back to winning ways in a comprehensive manner on Friday December 13th with a 5-1 shellacking of Surrey rivals SFC Pegasus at Newton Athletic Park.

Sahil Sandhu had given Pegasus a first minute lead, but Pavi Dhillion replied immediately and the Hurricanes took over the scoring after that. Nick Soolsma put them ahead in the 12th minute, and that was how it stayed until Dhillon got his second of the night six minutes into the second half to give the Hurricanes some breathing space.

Soolsma made it four midway through the second half, netting his 14th of the season, and Dhillon completed the scoring, and his hat-trick, with 10 minutes left to give Hurricanes the 5-1 victory and three much needed points.

At the other end of the table, ICSF Columbus picked up their first win of the season, a fine way for them to end 2019, with a 3-2 victory over Guildford FC FASA. They’re still seven points from safety but it will give them some hope of staging a dramatic fightback to stave off relegation when the action gets back underway next year.

John McEown had put Columbus into a 14th minute lead before FASA came roaring back and goals from Ramsey Alfantazi in the 30th and 41st minutes game them a 2-1 half time lead. Adriano Negri brought Columbus back level from the spot 10 minutes into the second half and Whitecaps Residency alumni Daniel Sagno got the winner for the Italians in the 69th minute.

The defeat will be a blow for FASA, who had picked up four points from their previous two games and must have pegged this one for another three. A win would have moved them to a three way tie for the second relegation place and could prove to be a very costly loss come the end of the season.

The other match from the final round of games thus year saw national and provincial champs CCB LFC United and Coquitlam Metro Ford Wolves play out a 2-2 draw. Kristian Yli-Heitanen and Jovan Blagojevic were on target for CCB, with Carlo Basso and Steve Kindel scoring for Metro Ford.

All of those results leaves the final VMSL Premier Division table of 2019 looking as follow. 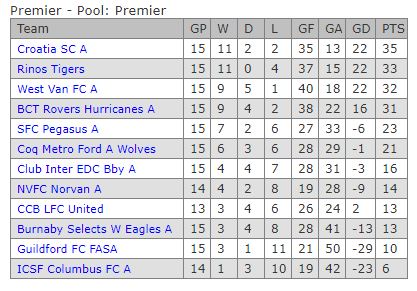 The battle for promotion to the Premier is starting to heat up, in many ways.

Richmond FC Hibernian finish the year unbeaten and atop the Division 1 standings, three points clear of Burnaby Metro Athletic, and currently with a game in hand. That will most likely soon be six points clear as their final match of 2019 against Westside FC Sierra was abandoned after five players were sent off for violent conduct, four from Sierra and one from Richmond.

Certainly sounds like a fiery affair for sure, but also notable is that long-time UBC Thunderbirds head coach Mike Mosher got himself on the scoresheet in this one before the game was abandoned!

Burnaby Metro Athletic moved into the second promotion place with a huge 3-1 win over Coquitlam Metro Ford Lupi, leapfrogging them in the table as a result, but with six points separating the teams in second to fifth, there’s still a lot of football to be played over the remaining seven matches to see who will be going up.

There’s likely to be a battle at the other end too to avoid relegation with five teams in the mix. Vancouver Greencaps and VAFC Santos are the two teams filling those places right now, but NVFC Norvan Storm, Club Inter EDC Burnaby B, and Rino’s Fury looking over their shoulder and looking to avoid a bad run in the remaining games.

Metropolitan FC finish the year with an eight point lead at the top of Division 2A, and look set for promotion back to Division 1, but the Division 2B title is very much up for grabs with GFC United Lions holding a narrow two point edge over FC Serbia United and with Binger’s Army just a further three points back in third.

With all three teams still to play each other down the stretch the title is still very much there for the taking, with Serbia playing Binger’s Army on January 3rd and then GFC United the following weekend.

Siaron, West Van FC B, and Bombastic FC are the three teams topping the Division 3 pools, but with a number of sides just a handful of points away, there’s a lot to still be decided there.

The league is currently on their Christmas break but the teams get back in action from January 3rd. You can find all the fixtures, results, and standings across all the VMSL divisions at VMSLsoccer.com, and don’t forget to head over to the TakeThePiss forums for all your football banter.