It was quite the Thanksgiving weekend for Vancouver Metro Soccer League (VMSL) Premier sides.

With CCB LFC United away doing the province proud in Newfoundland in winning the nationals and lifting the 2019 Challenge Trophy, the five VMSL Premier games last weekend saw no shortage of their own drama.

By the end of it, the league leaders had lost their unbeaten record, but stayed top, the remaining two unbeaten sides kept their records intact against each other, and the top of the table has got a hell of a lot tighter in one fell swoop.

All five Week 6 matches took place on Friday night, with two games at Burnaby Lake, two at Newton, and one at Coquitlam Town Centre.

The action kicked off in Burnaby with a battle between promoted side ICSF Columbus and defending VMSL Premier champs Croatia SC. Columbus headed into this one looking for their first win and they still were after going down to a 4-2 defeat.

Thinks started brightly for Columbus though when Tino Cucca put them ahead in the first minute, but Croatia settled after being under the cosh in the early going and levelled through a David Zaharija penalty 20 minutes in. Fifteen minutes later and they had the lead when Daniel Davidson fired home and that was how it stayed until five minutes into the second half when Davidson hit his second.

Emile Saimovici increased Croatia’s lead further before Ylya Malek hit a late consolation for Columbus, leaving them rooted at the bottom of the standings on one point. Croatia are starting to hit their stride now after dropping their opening game of the season and are unbeaten in five to sit just two points of the top spot.

That top spot is still held by Rino’s Tigers despite going down to a surprise 2-1 loss to Club Inter EDC Burnaby. Rino’s headed into this one with a perfect record of five wins from their first five matches, but they fell behind just before the break when Gilly Kane made it three goals in three matches for Inter to give the home side a half time lead.

Tigers’ top scorer Farivar Torabi tied things up just before the hour mark with his fifth of the campaign, but the leaders couldn’t press on and get the winner. Instead it was Inter who did that through Rizal Ganief, boosting Inter’s season and reducing Rino’s lead at the top to just one point.

Hot on Rino’s heels are West Van FC and the 2017/18 Premier champs, BCT Rovers Hurricanes, who faced off last weekend in a battle of the other two unbeaten teams in the VMSL Premier this season.

As many expected, there was little to choose between the two sides in this one at Newton Athletic Park. Nick Soolsma grabbed his fourth of the season to give the Hurricanes a first half lead, but Shane Howard tied things up just before the hour mark for a share of the points and both teams now sit just one point back of Rino’s at the top of the standings.

The other match at Newton saw SFC Pegasus return to winning ways with a narrow 2-1 win over Guildford FC FASA. Ibrahima Basse fired FASA in front 15 minutes in and it was a lead they held until five minutes into the second half when Paul Bahia tied things up.

With ten minutes remaining though FASA suffered a double blow with Said Bedouhene sent off for a tackle in the box that earned him a second yellow, giving away a penalty that Javid Khan slotted home. FASA then finished the match with nine men when Nassim Banzouz picked up a second yellow in stoppage time.

Coquitlam Metro Ford Wolves round off this week’s recap and they got their first win of the season to lift themselves out of the relegation places, getting past Burnaby Selects White Eagles 5-2 at home.

But it wasn’t as comfortable as the scoreline suggests. Jules Chopin and Joseph Powell had Metro Ford two up by the half hour mark but two goals from Golden Boot leading Vladyslav Matlash saw the teams go in level at the break.

A 53rd minute goal from Andre Pietramala and a brace from Carlo Basso saw the home side through in the second half, with their only blip on proceedings being the sending off of Powell for a second yellow.

So all of those results leave the VMSL Premier standings as follows: 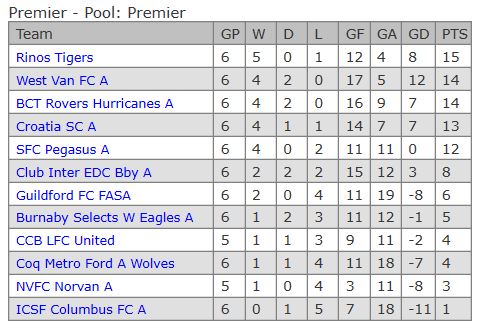 With CCB having the weekend off to recover from their exertions at the nationals, there’s another five matches on the slate this weekend. You can find all the fixtures, results, and standings at VMSLsoccer.com, and don’t forget to head over to the TakeThePiss forums for all your football banter.