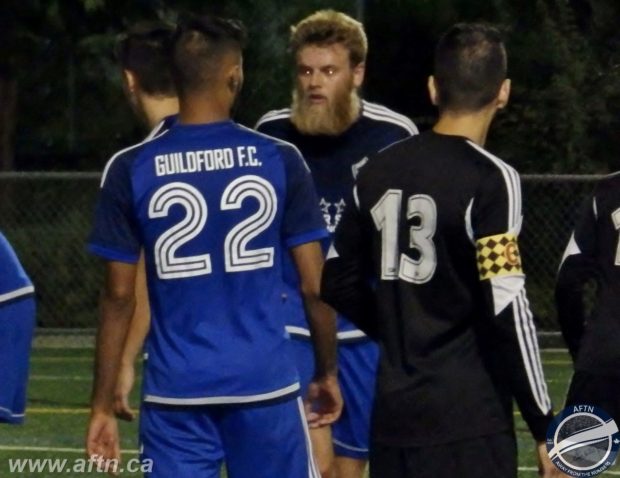 Another interesting week across the board in Vancouver Metro Soccer League (VMSL) saw the top two teams in the Premier Division remain unbeaten, back to back champs Coquitlam Metro Ford Wolves lose again, and three teams keep their 100% starts to the season intact in Division 1.

The big question after the first month of the new VMSL season is just what has happened to Coquitlam Metro Ford Wolves? After wrapping up back to back VMSL Premier Division titles with considerable ease last season, they limped to the end of their campaign, losing a few league matches and the Imperial Cup final, before crashing out of the Provincial Cup at the first hurdle.

That hangover seems to have carried on into the new season, with Coquitlam taking only three points from their first four matches. Their latest defeat came on Friday night at Burnaby Lake where the Wolves were on the wrong end of a 4-1 thumping and a dominant display from Croatia SC. 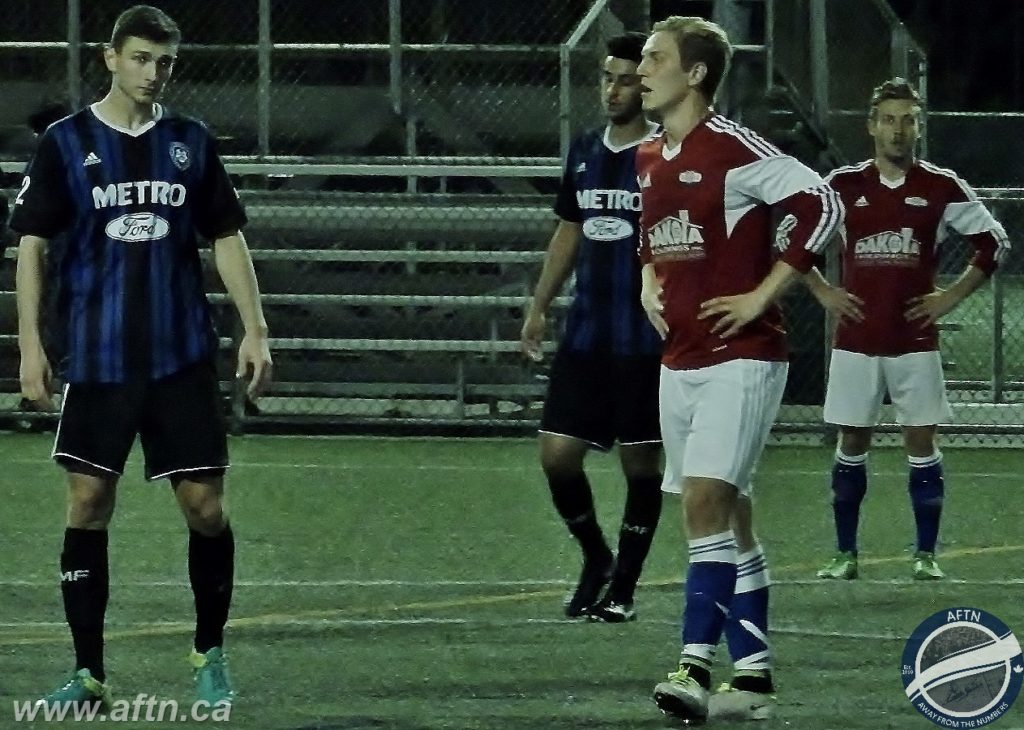 Croatia bossed the game from the start, with goals from the Malamura bothers David and Mark, Ramsey Alfantazi, and Emile Saimovici, securing the three points.

They were three goals ahead of the defending champs before the hour mark. Coquitlam did managed to get on the scoresheet before the end through Lucas Krivak, but Croatia added a late penalty (which you can see below) to make it a 4-1 final and keep Coquitlam in the relegation places at this very early stage of the season.

The top two in the Premier Division remain unchanged and undefeated after the first four games, pulling away from the pack a little with third placed Club Inter having a bye week ahead of this week’s Challenge Trophy in Surrey.

A pair of braces from TSS Rovers and SFU Clan alumni Ryan Dhillon, and former TFC player Nick Soolsma, and goals from Pavi Dhillon and former Whitecaps PDL player Cam Hundal, saw leaders BCT Rovers Tigers United keep their 100% record and romp to a 6-1 home win over bottom side CCB LFC United, who are hit by injuries and continue to struggle but at least got a consolation in their first goal of the season to show for their efforts, courtesy of former Whitecap Caleb Clarke.

Continuing to chase the Tigers down in second place are Pegasus FC, who had a 3-1 win over Westside thanks to a pair of goals from another former Whitecaps, WFC2 player Sahil Sandhu, and one from Javid Khan. Andrew Mazzone got on the scoresheet for Westside. 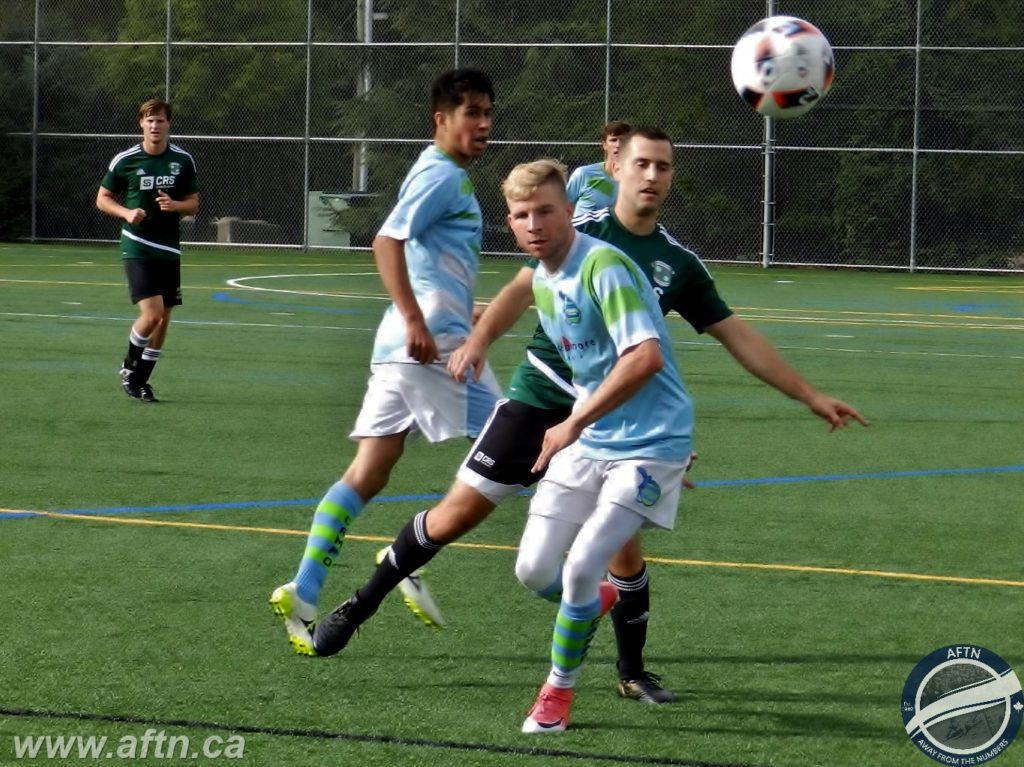 It was an enjoyable match, with the action going end to end, and some contentious moments as Richmond ran out 3-1 winners.

The always dangerous Edson Castro hit the post for Campo just ten minutes in with a nice turn and volley, but the came changing moment came on the half hour mark when Campo’s 18-year-old winger Cristian Villatoro saw a straight red after an altercation with Richmond’s goalkeeper.

The Campo player seemed to kick the back of the keeper’s leg after some verbals aimed at his direction and having his foot stepped on, which saw the Richmond goalie booked for his part in the incident.

Up a man, Hibernian took over and took the lead three minutes before half time when Geoff Salt headed home.

Both teams had their chances in the second half, as Campo tried to take the game to their visitors despite the man disadvantage, but Richmond were looking dangerous with each attack and eventually doubled their lead midway through the second half when the Campo defence failed to deal with a corner and Hamzah Gurung poked the ball home.

Ivan Collin hit his third of the season to give Campo some hope with less than five minutes remaining, but that hope was only to last two minutes before Fraser Kirkland looped a nice finish past the advancing keeper to restore Richmond’s two goal lead and secure the three points.

You can see all the goals and a couple of other highlights from the match in our video below.

All those results leave the VMSL Premier standings looking as follows, after week four’s action. 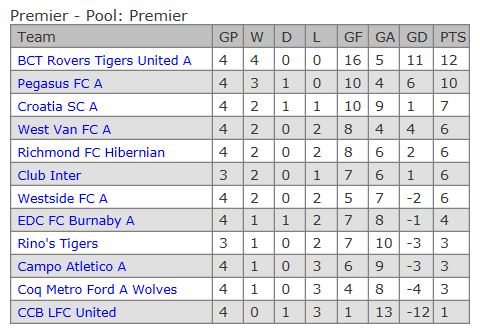 There already feels to be a clear gap developing in Division 1 between the teams that are going to be pushing for the promotion places and those that will be battling to avoid the two relegation spots.

NVFC Norvan Lions, Guildford FC, and ICSF Columbus are sitting at the top of the standings with 12 points out of 12 after some battles this past weekend.

Norvan Lions had the most comfortable outing of the three, winning 3-1 away to the pointless Rino’s Fury on Sunday, while Columbus won by the odd goal in five at GN Sporting Club on Friday.

AFTN headed to Burnaby Lake on Friday night to take in the top of the table clash between two unbeaten teams, Burnaby Metro Athletic and Guildford FC in an entertaining match that saw the Surrey side keep their 100% start to the season intact with a hard fought 2-1 victory.

The action flowed from end to end in the first half but it was Guildford who headed in with a one goal lead when Burnaby Metro’s keeper couldn’t hold on to a long range strike and Lars Lorenz (pictured with the glowing eyes in our fantastic main picture!) pounced on the rebound to fire home the opener.

There was a moment of controversy in the second half when a Burnaby Metro player broke through and rounded the Guildford goalie on the edge of the box, before being brought down by the keeper. It seemed a cut and dry red card offence, but Guildford accused the Burnaby player of diving (although why he would when he had an open goal gaping for the equaliser is hard to compute). The one thing it wasn’t was just a booking for the Guildford goalie, but that’s what the referee dished out, and gave a free kick to Burnaby.

Definitely a match changing decision, but Burnaby Metro didn’t care too much about that when Kareem Shouhdy pounced on a fumble by the Guildford goalie to poke home a 72nd minute equaliser from close range.

It was anyone’s game and the action went to and forth, but Guildford came up with a huge win when Gurinder Pannu showed great composure in the Burnaby box to make room for himself and drill the ball home low through a crowd of players to hit the winner seven minutes from time.

Here’s all three goals and some other highlights.

GN Norvan Storm and Burnaby Selects White Eagles were this week’s big winners in the Division. The Storm stirred up quite the storm in beating pointless bottom side GN North Delta 6-0, while the White Eagles thumped the winless Richmond Royals 5-1. FC Romania beat Binger’s Army 4-2 in the division’s other match last weekend.

All of which leaves the Division 1 standings as follows: 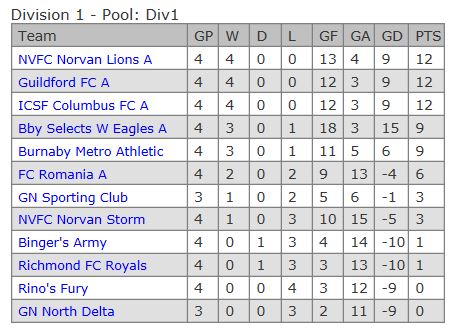 Unbeaten Bombastic FC lead the way in Division 2A with 10 points, although third placed Coquitlam Metro Ford Lupi still have a 100% record a point behind, having played a game less. This year’s Provincial B Cup champions Vancouver Greencaps lead Division 2B, also on 10 points..

Bowen Island FC and Westside Black Aces are the co-leaders in Division 3A, with NVFC Norvan Vikings topping the Division 3B standings, and Richmond FC Olympics and North Delta United sharing the top spot in Division 3C.