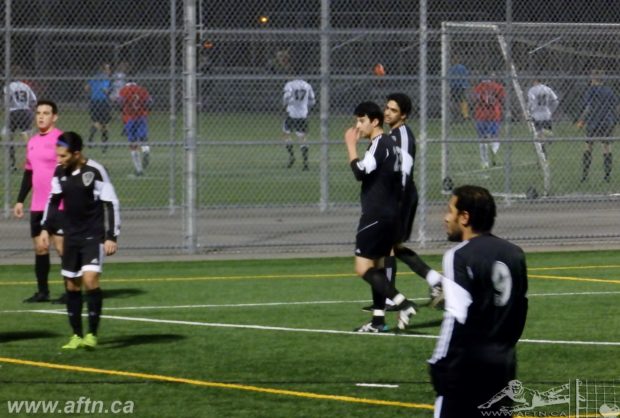 The 2016/17 VMSL season reached the halfway stage this past weekend and the promotion races in Divisions 1 and 2 caught the eye with some entertaining and closely fought matches between the top challengers.

Coquitlam Metro Ford Wolves continue to be the runaway leaders in the Premier Division, now only currently holding a five point lead over their nearest challengers but with three games in hand. Still unbeaten, with a 100% record, their rivals will be hoping that this fixture pile-up may be the defending champions undoing and stop their procession to back to back league titles. Stranger things have happened.

The gap has closed at the top, and the games in hand have built up, due to Coquitlam not completing a match these past two weeks. In week 10, the Wolves were leading Westside 2-1 with around five minutes remaining before the floodlights packed in at Charles Best and the result has been listed as incomplete, with Westside left very unhappy at how things played out.

Coquitlam didn’t have a game scheduled this past weekend and that allowed Rovers Tigers United to close the gap and move into second place in the Premier after a 2-1 win over Pegasus FC in the Surrey derby at Newton on Friday night. A brace from Nick Soolsma did the damage, with Chetan Jhooty replying for the Horsemen from a free kick.

The other Friday night match saw an eventful game play out at Burnaby Lake with Richmond Hibernian coming away with a 2-1 win over EDC Burnaby, which we kept half an eye on whilst at the D2 match on the adjacent pitch. 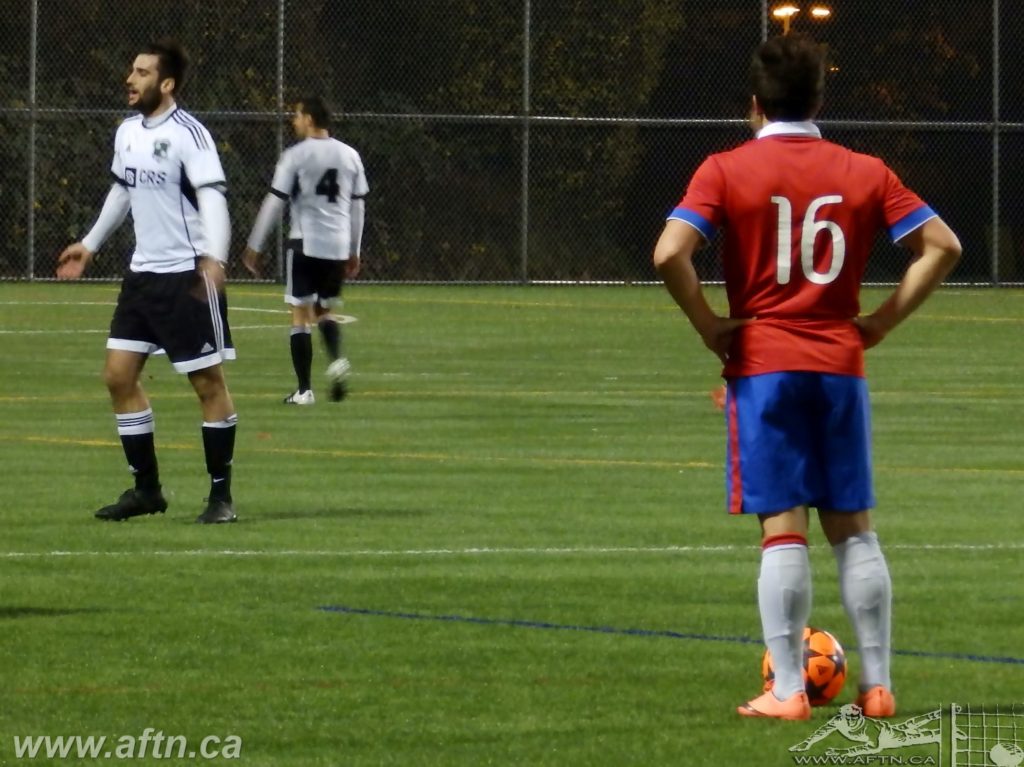 Richmond were two up by the half, before a bizarre incident led to the Chileans pulling one back from spot at the second attempt.

Hibernian opened the scoring in the first minute with Steve Chivers getting an easy goal from close range. Lucas Barrett headed home a 15th minute corner to double their lead and that’s how it stayed till half time, before the game sprang back into life around the hour mark.

Richmond’s keeper Brad Cardwell brought down a Burnaby player in the box, earning a yellow card. Cardwell saved the resultant penalty but was adjudged to have come off his line, earning a second booking and a sending off.

Hibernian didn’t have a back-up keeper so had to use Barrett in goal. EDC buried the retaken spot kick but were unable to turn their pressure with the one man advantage into an equaliser, with Hibs having a couple of chances to wrap things up late on before coming away with all three points to sit joint third in the table alongside West Van.

After three losses and a draw in their last four matches, West Van got back to winning ways on Saturday with a 1-0 victory at now bottom side North Delta. ICSF Columbus moved off the bottom spot after a 4-0 thumping of Club Inter at Empire, while Westside beat Croatia 2-1 in the only Sunday game.

All of which leaves the VMSL Premier standings as follows: 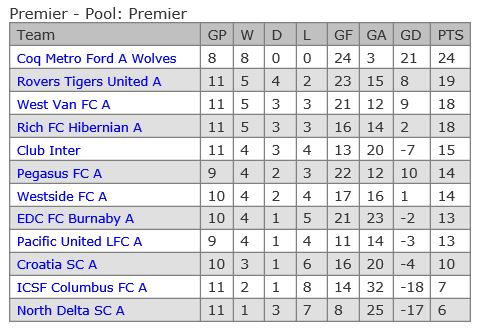 The promotion battle in Division 1 has been very enjoyable to watch play out in the first half of this season, with the lead seeming to change on an almost weekly basis. Rino’s Tigers are back on top after the first ten games, level on points with CCB Guildford but holding the tiebreaker on the Surrey side.

The Tigers regained top spot with a 3-1 win over Binger’s Army on Saturday afternoon, while Guildford beat GN Sporting Club 1-0 in Surrey on Friday night. One point now separates the top three sides, with just four points between the top seven. Very much still all to play for.

New boys Campo Atletico were the league leaders heading in to the weekend, taking on fourth placed NVFC Norvan Lions at Burnaby Lake on Saturday, with just a point between the teams in the battle over promotion places and socks (long story apparently).

There’s still a point between them after a 1-1 draw that saw Campo drop to third and Norvan staying in fourth. 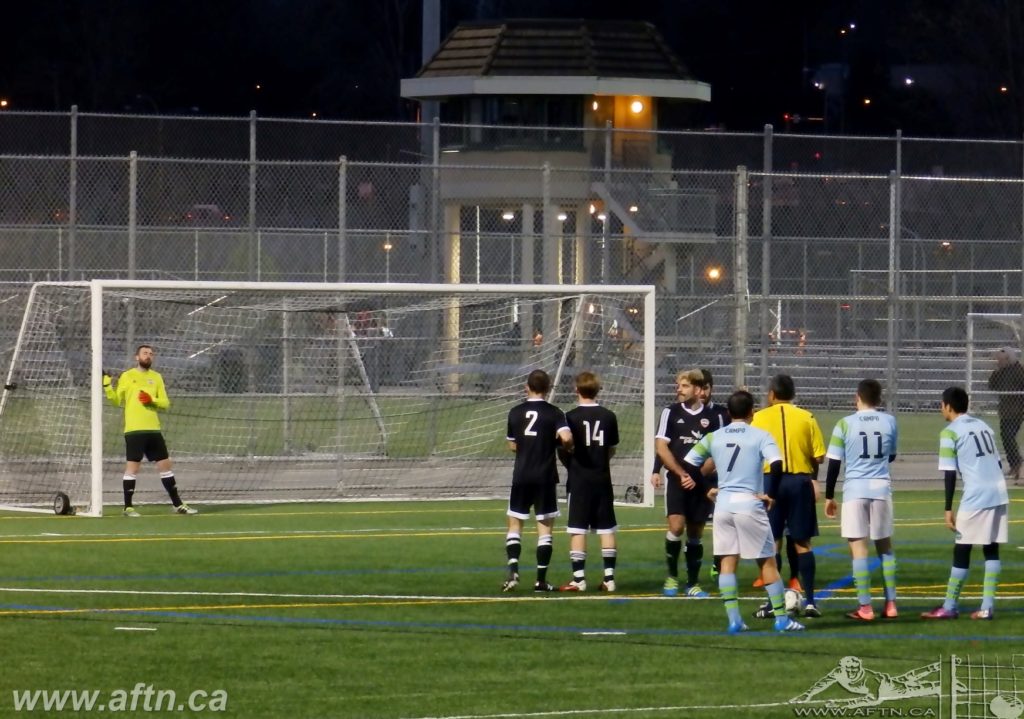 After some early Campo possession, Norvan put the Atletico defence under a lot of pressure towards the end of the first half and had several chances to open the scoring, but they could capitalise on them and the teams headed into the interval goalless.

It was a different story in the second with Campo launching wave after wave of attacks and looking the more likely to break the deadlock, but the Norvan keeper was having a great game. NVFC still looked dangerous on the counter, and it paid off in the 81st minute when they slotted home a cross from the right.

Full credit to Campo though who kept fighting till the end, getting a deserved equaliser in the final minute after some great individual work and finishing in the box.

You can see both of the goals and some of the other chances from the match in our video.

There was a top of the table clash in Division 2A as well, and that’s another battle that looks set to go down to the wire.

Burnaby Metro Athletic and 13th Legion have looked the class teams of the division in recent weeks, taking the top two places heading into and of the weekend, but getting some real competition from Snipers FC as well, who thumped PCOV Europa 8-0 on Saturday and will move to within two points of the leaders if they win their game in hand.

The top two battled it out at Burnaby Lake on Friday night in a cracking match that ended 1-1, but will have left 13th Legion wondering how they didn’t come away with all three points. 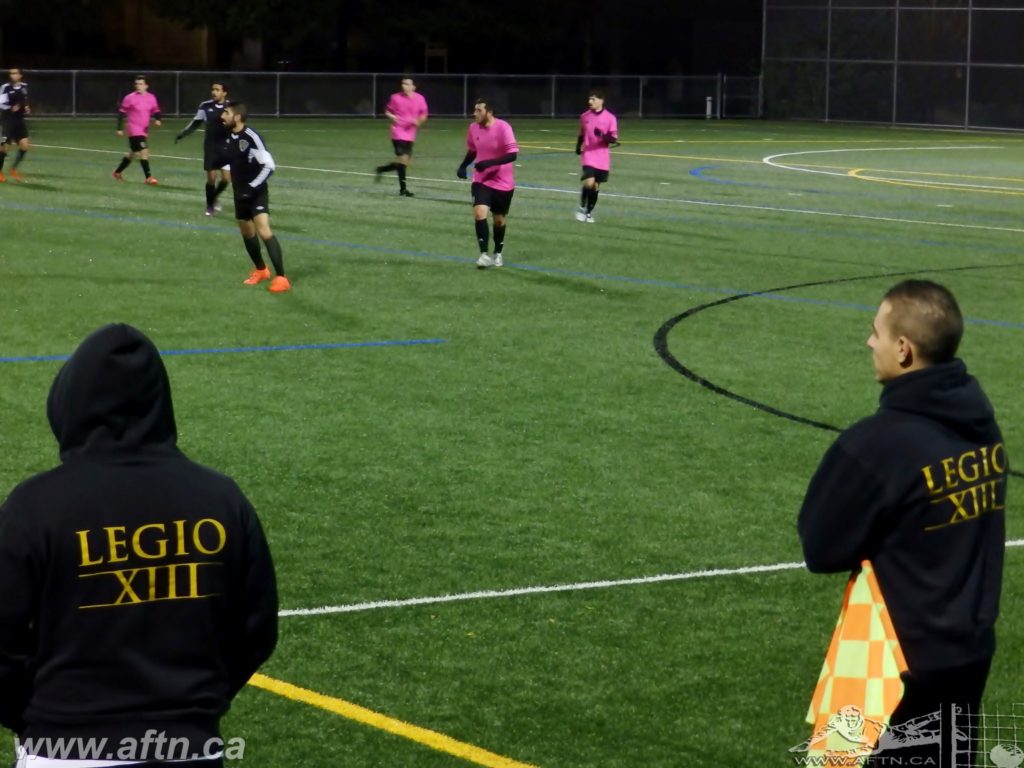 Legio could have been three or more up within the first 20 minutes. They were all over Burnaby Metro from kick off before the leaders started to look better towards the end of the half. Goalless at the break, 13th Legion’s pressure finally paid off ten minutes into the second half after a nice move up the right.

The game changed with about 17 minutes remaining when a Legio player picked up a second yellow, reducing the visitors to ten men. It seemed soft but they were lucky to not have gone down to ten earlier after a horrible looking lunge from behind from the same player that saw the Burnaby player stretchered off and just a booking.

Metro pressed hard with the man advantage and after missing a couple of really good chances to tie things up, they finally got back level with two minutes left after a Mashinchi free kick from former Whitecap and UBC stalwart, Navid Mashinchi.

Burnaby Metro had a couple of chances to win it too in the closing moments, but both teams had to settle for a point in the end and Athletic hit the halfway point of the season with a two point lead, on 23 points, as they look for back to back promotions.

You can see Burnaby Metro’s goal and a few other chances from both sides in our video below. Unfortunately we weren’t quick enough to capture the Legion’s goal (sorry lads). Blame frozen fingers!

Sarajevo FC and Euro FC are also still in the promotion hunt, sitting in fourth and fifth places, just five points off top spot. It’s between those five teams now heading into the second half of the season.

It’s tight at the top of Division 2B as well with two points separating the top three sides.

Shaheen FC lead the way on 23 points after hammering Meraloma 6-1 in North Van on Sunday. Burnaby Selects White Eagles sit a point back in second after a comfortable 4-1 win over Vancouver United at Empire on Saturday, with NVFC Norvan Storm beating bottom side Tanoa Lobbans 3-1 in Surrey on Saturday night.

Gastown FC will still fancy their chances of getting back into the mix, despite losing 2-0 on Saturday to Vancouver Greencaps, sitting four points off the top spot in fourth place, but with a game in hand, tied on 19 points with Harps FC.

Three teams are battling it out for top spot in Division 3A, with just a point separating leaders Royal City SC (23 points), Westside FC Juniors (22 points), and America FC (also 22 points). Cliff Senior Cobra and Bosna SC are tied at the top of 3B on 27 points, but the Cobras have a game in hand.

Like their Premier counterparts, Coquitlam Metro Ford Lupi remain unbeaten on the season, leading 3C by eight points now and with a goal difference of plus 54.

There’s another busy weekend of action coming up. You can find all the fixtures HERE. It’s going to be an exciting second half of the season, so get out and see some of the matches if you can.