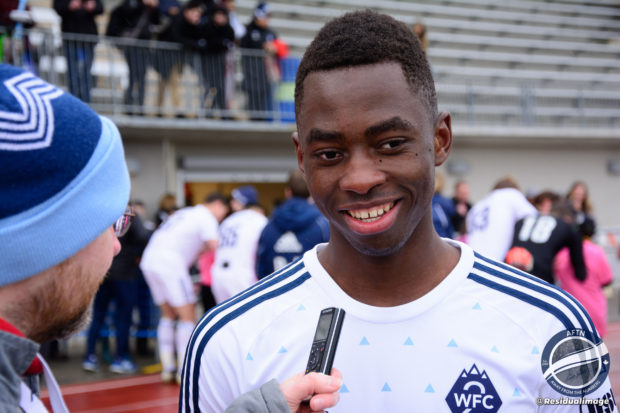 Whitecaps Residency striker Gloire Amanda became the seventh teenager on the WFC2 roster when he signed his first pro deal at the end of last month.

That in itself is an amazing stat to let soak in, but it was a natural progression for the 18-year-old after lighting it up in the USSDA with the U16s and U18s these past three seasons.

It’s felt for a while that it was just a matter of when, and not if, Amanda would make the move up to USL level, but his strong performances in WFC2’s preseason matches, where he scored two goals over the three matches, were the clearest indication yet that the striker had a career ahead of him in the pro ranks.

Heading to college was still a possibility for the prolific forward. When you’re averaging more than a goal per game for the season, which Amanda is this year with the U18s, NCAA scouts take notice. But turning pro has always been his dream and his firm aim after moving west from Edmonton to join the Whitecaps Residency program in 2014.

“It was a goal come true,” Amanda told AFTN. “Something I’ve always wanted to accomplish. I’m just very grateful to the club and the coaches for believing in me and giving me a chance. Hopefully I can just keep going on and make the club proud.”

Amanda’s story is one of overcoming adversity, starting a new life, having a clear goal in mind, and grabbing your opportunity. It’s not been without struggles along the way, but he’s earned every part of the success he now has, with a lot of work still ahead of him.

“He’s done really well,” new WFC2 head coach Rich Fagan told AFTN. “Focus and concentration, there’s not many that have better than Gloire. He’s worked his socks off. He deserves it.”

Born into the Nyarugusu refugee camp in Tanzania, Amanda moved to Canada as an eight-year-old, settling with his family in Edmonton. That’s a story in itself, but one which we’ll save for another day.

His footballing skills were clear to see and he had a youth career with Edmonton sides Xtreme FC, Internazionale, and the St Nicholas Soccer Academy, where he played alongside his good friend Alphonso Davies. Impressing, he earned a spot with FC Edmonton Reserves, training with the likes of Hanson Boakai and Shamit Shome.

After first trialing with the Whitecaps in 2013, and impressing the then U16 head coach Fagan, Amanda made the permanent move west to join the Residency program for the 2014/15 season, and he’s been on an upward trajectory since.

His first season in the U16s saw him hit 15 goals in 23 appearances, in a run that saw the team bow out of the USSDA playoffs in a heartbreaking quarter-final penalty shoot out loss up at SFU. 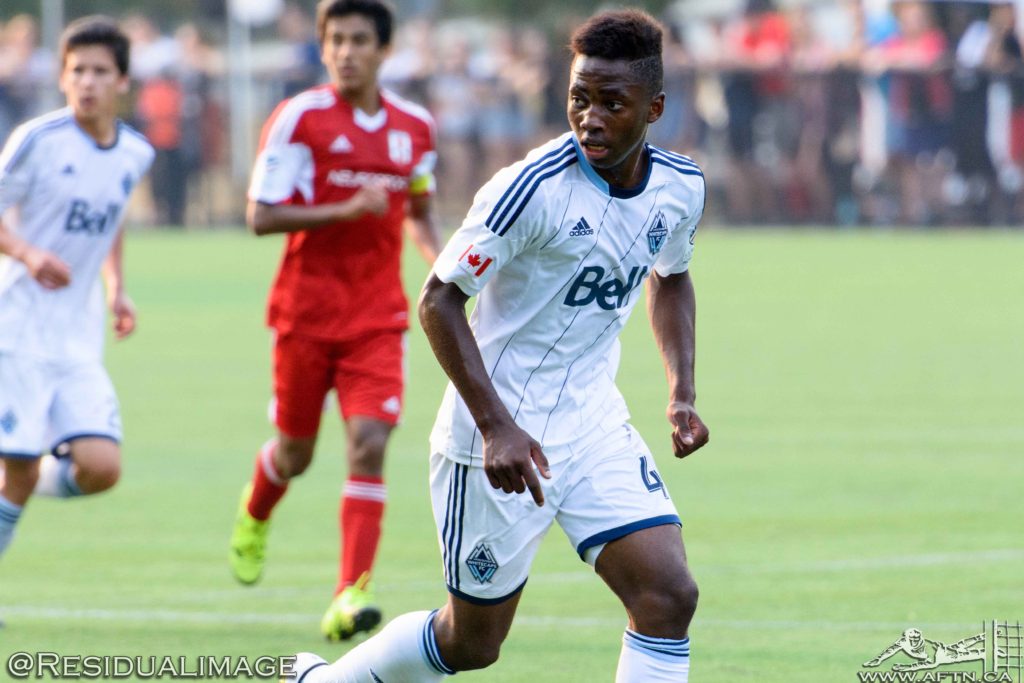 Moving up to the U18s last season, Amanda scored 17 goals in 33 appearances, three of them in the playoffs as the ‘Caps lost another postseason heartbreaker, losing 2-1 to FC Dallas in the 2016 U18 Championship game. Amanda was a key player in the U18s last year, and was placed second in our annual Residency ‘Ones To Watch’ feature and was capped by Canada at U18 level.

He’s continued apace this campaign. He already has 16 goals in just 14 appearances as the U18s lead the way once again in their Division, as they look ahead to this year’s USSDA playoffs.

Now that the jump’s been made to the USL side, Amanda’s time with the U18 side for the rest of this season will be limited. He’s still finding his feet in the pro game. He’s impressed at times, but also shown the aspects of his own game that he needs to work on, and he’s already noted the difference between youth and pro levels.

“The game’s a bit quicker than what I’m used to,” Amanda admitted. “But other than that, everything’s good. The physical part of the game too is way more difficult than the USSDA. It’s something I need to improve on and take it and improve and just get better.”

Amanda’s made a promising start. Making his pro debut as a substitute in the 2-0 season opening loss in LA, the striker has played in all four of WFC2’s matches so far this season, clocking up 131 minutes.

He made his first start in the third game of the season, the 3-0 home win against Seattle Sounders 2, playing the full 90 minutes and already looking like he belongs at this next level.

“Honestly, I felt comfortable,” Amanda said of that first start. “At the end a little bit of a lack of experience. Overall, I was alright, but I can definitely do better.

“You can always get better. My whole game is geared to me finding the back of the net, so yeah, I feel that I can take this next step and I feel I can score more goals at this level too.” 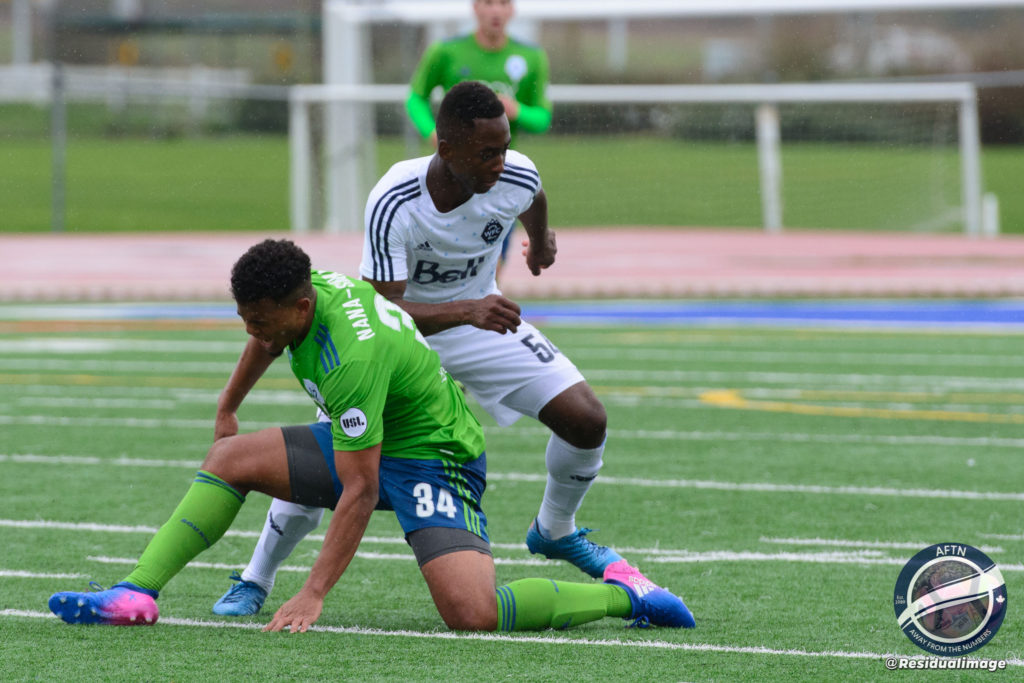 There’s little doubt his first pro goal will come soon. He nearly got it in that Sounders win, seeing his goalbound header at the end of the first half stopped on the line by Seattle’s keeper. He came even closer in Sunday’s win over Timbers 2, leading a 3-on-2 breakaway in the closing minutes that saw the Portland keeper produce a sprawling save to deny Amanda that first goal.

The rebound fell to Thomas Sanner, who fired home the 84th minute winner in a gritty 1-0 victory. Amanda wasn’t credited with an assist on the goal, but he did earn his first pro assist the week before when he sent in the cross that Andy Thoma buried to secured the ‘Caps win over Sounders 2.

Yeah, he’s fitting in just fine. Having so many of your old Residency teammates and friends round about you certainly helps with that.

“Yeah, it helps a lot,” Amanda said. “Just knowing them on the field has a chemistry, but also behind the scenes, in the dressing room. That really helps. Once you feel comfortable in a dressing room, that shows on the pitch too. All the guys on the team, they’re all good guys.”

Another aspect that’s helped with the settling in is Fagan. The ‘Caps coach has been with Amanda every step of the way since he moved here from Edmonton. It’s a coaching style he knows well and has thrived under.

“Definitely,” Amanda said. “He’s been my only coach since I came here. The 16s, 18s, and now USL. I’m very grateful for what he’s done for me and hopefully I can repay him on the pitch.”

With few strikers on the WFC2 roster, Amanda’s going to see plenty of minutes this season, and a regular starting spot is certainly there for the grabbing. It’s a great opportunity for the striker. He’s set his targets for the year ahead, but for now, he’s keeping those firmly to himself.

“Always, always,” Amanda told us. “I always have goals to accomplish. Every game. Every season. There’s always something I want to accomplish. I can’t say it right now, but I definitely have targets I want to reach.”