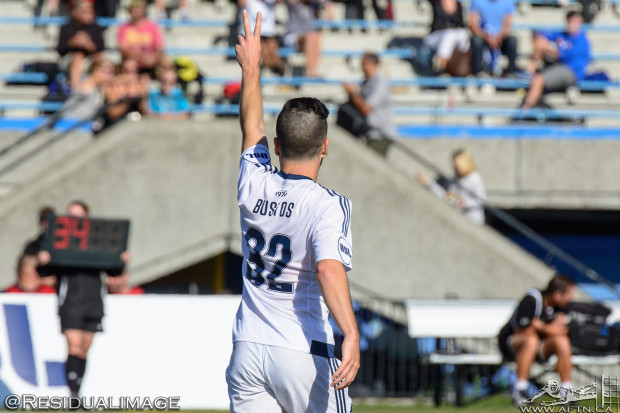 If English R&B singer-songwriter Billy Ocean taught me anything, it’s that when the going gets tough, the tough get going.

And the going is certainly tough for Vancouver Whitecaps right now.

Five games without a win, blanked four times in their last seven matches, just three goals from open play in the others, and ravaged by injury, the ‘Caps haven’t had their troubles to seek in this season’s run-in (yes, I’m using that phrase again until people here are familiar with it!!).

The Whitecaps seem stuck in a dark tunnel but one of the few lights shining at the end of it comes in the shape of a 19-year-old Canadian.

Marco Bustos is a clear talent. It’s been a pleasure for us here at AFTN watching his rise through the ranks from a 15-year-old in the Residency, through to captaining the U18 side last year, to signing his first pro contract with the ‘Caps, to lighting it up in the USL for WFC2.

All that was left was that MLS debut and it came in Frisco, Texas on Wednesday night when Bustos came on as a 61st minute sub, just over 24 hours after earning his first senior cap for Canada in the 1-1 draw with Ghana in DC on Tuesday evening, playing the final 19 minutes of that match.

It’s been a whirlwind couple of days for Bustos.

“I don’t know if I can sum it up,” the Residency alumni told reporters after the Dallas match. “It’s an amazing feeling playing for your country, then getting my first cap and then getting my MLS debut the next day. Within 24 hours, two appearances, making my first appearances with both national team and club.

“I flew in this morning. I left my hotel in Washington [DC] about 5 in the morning. It was a bit iffy with the flight, I had some complications there. Got in, slept for about three hours, then had my pre-game lunch and then that was that.”

A hectic schedule, but he tried to get some sleep in DC before heading off, not always the easiest when the adrenalin is flowing and long time friend Sam Adekugbe is your national team roomie!

“Sam was my room-mate, so it was a bit noisy,” Bustos joked. “But that was a good sleep.”

Making his senior debut for his country, was a dream come true for Bustos, who has represented Canada at U17 and U20 level in the past.

Having strangely been deemed surplus to requirements by Benito Floro for Canada’s Olympic U23 squad, Bustos’ call up to the senior team was perhaps unexpected, but once it came he wanted to savour every minute of it and he did.

“It was huge playing against such a big country like Ghana, who were at all the World Cups recently” Bustos said. “Just to go there and play with them and against them, it was great. To get a 1-1 result, you couldn’t have asked for anything better. Well, we could have got the three, but it’s a great country.”

A fantastic occasion for the Manitoba native, but then making his MLS debut for the Whitecaps the very next day just took his week to another level.

“I felt like a little kid in the park,” Bustos said with a grin that didn’t leave his face for the whole press scrum. “Getting the call to come in with 30 minutes left, it was a dream come true. I just wanted to go in there and have fun.

“Robbo always tells me just to go out and have fun. He likes how I go out there. I don’t look nervous and I just want to make things happen. So I have to please the manager! That’s just the way I play as well.”

Whitecaps’ coach Carl Robinson hadn’t told Bustos that he was definitely playing when the young midfielder headed westwards from Washington, but his sparing use in the Canada friendly provided Robinson with the ideal chance to blood the rookie.

“Whenever a player’s on the bench, you always expect yourself to go in,” Bustos said. “You just need to be ready and I was ready, and when I got the call I just wanted to make the best of it.”

The hectic travel itinerary certainly didn’t seem to affect Bustos, who looked fresh and sharp when he came on for the last 29 minutes in Dallas, impressing many watching, including ‘Caps keeper, and captain on the night, David Ousted.

“I thought he did really well,” the Dane told reporters after the match. “I was impressed by the way he went in and he played the way that we know he can. It can be intimidating coming in and having to take responsibility in that midfield but he did well. He was good on the ball, nice passes and I thought he looked dangerous. Again, it’s that little bit of depth and guys like him gets that chance now.”

With the injuries decimating the Whitecaps creative players right now, that chance is very much there for Bustos.

Pedro Morales, Mauro Rosales and Nicolas Mezquida didn’t make the trip to Dallas and Robinson revealed after the game that all three potential number 10’s look set to miss the season closer against Houston next weekend. Whether they’ll be fit for the playoffs seems touch and go, with Mezquida looking to be the furthest along the road to recovery but not there just yet.

Cristian Techera did make the trip, trained on Tuesday and felt pain in his hamstring during his first sprint. For us, he’s the key to the Whitecaps having any success this postseason and his loss would be the most widely felt.

That all means that someone has to fill the very big attacking, creative midfielder void. Step forward Bustos, whose chance to shine is coming at just the right time, rewarding his patience in his rookie season, and its a chance the player is eager to try and grab with both hands and one that his manager seems prepared to give him.

“He showed today in his 30 minute’s that he’s an option,” Robinson said of Bustos after the Dallas game. “He was confident, he showed no fear, he wanted to get on the ball, he made things happen, he got in the penalty box. Technically, he’s a very good player, so I’ll have no worries throwing him in.”

It’s still a big ask of a teenager who has only played his first MLS minutes in the penultimate game of the season.

Daunting, but the one thing we know about Bustos is that it will certainly not faze him. He has a confident swagger, we love. All the best players have that. Some may say cocky, but again, in football, we see that as a much needed trait to have.

“Even when the guys are not injured I’m thinking about the next game and hoping and dreaming about maybe getting the call,” Bustos says. “Hoping that Robbo says ‘just get in there’. I’m always ready.”

He’ll definitely be getting his shot for next week’s now pointless, and frankly pain in the ass, trip to Honduras to face CD Olimpia in the ‘Caps final game of their first ever CONCACAF Champions League campaign.

Even without the injury crisis, Bustos was scheduled to play in that one, and, naturally, he’s ready for the next stage of his Whitecaps adventure.

“If I get the call, I’ll be ready for that and just make the best of it and, again, have fun,” Bustos added. “If I get the 90, I’m going to push through it as best I can. I just got to get through it. We’re all born to play soccer, to play 90 minutes, that’s the sport. You’ve just got to be ready.”

It’s been a tough first season in the pros for Bustos. After impressing in the preseason, he’s had to bide his time and fight back to fitness after missing a huge chunk of the early part of his season through an injury that occurred in training (through kicking a teammate just that bit too hard!).

It ruled him out of any MLS minutes and any time in the Canadian Championship semi-final against Edmonton. It also curtailed his expected time in USL with WFC2, where he was expected to be an integral part of the team.

He eventually made his USL debut in the summer, going on to become the joint leading scorer with WFC2 alongside Caleb Clarke, with 7 goals and 2 assists in his 17 appearances.

Those appearances with the USL team got Bustos ready for the pros in terms of match fitness and physically.

“Getting in there and playing for 90 minutes, it’s great for a guy like me,” he feels. “The way we play, to get that style and bring it to the first team, it’s great to get those minutes rather than just be training all the time. It’s good. It makes me grab more confidence and I couldn’t ask for anything better.”

Moving from excelling in youth football to continuing to excel in the highly competitive ranks of USL is one thing, but Bustos has already found out that making the further move up to MLS is another whole other level again.

Of course, amidst all the good times for Bustos with his MLS debut comes the stark reality of the Whitecaps plight right now. As exciting as his first appearance of the season was for him, it came in a defeat for the ‘Caps, which he’s fully aware of, but in his confident manner, he sees this as just a mere blip for the club right now.

“Personally, I’m excited, but for the team, we’ve just got to keep going till we reach our last steps in this MLS season,” Bustos added. “I think we’re going to get through it, go to the playoffs and we’re going to go far in the playoffs. That’s all I can say.”

And Bustos may still have a large part to play in that goal. 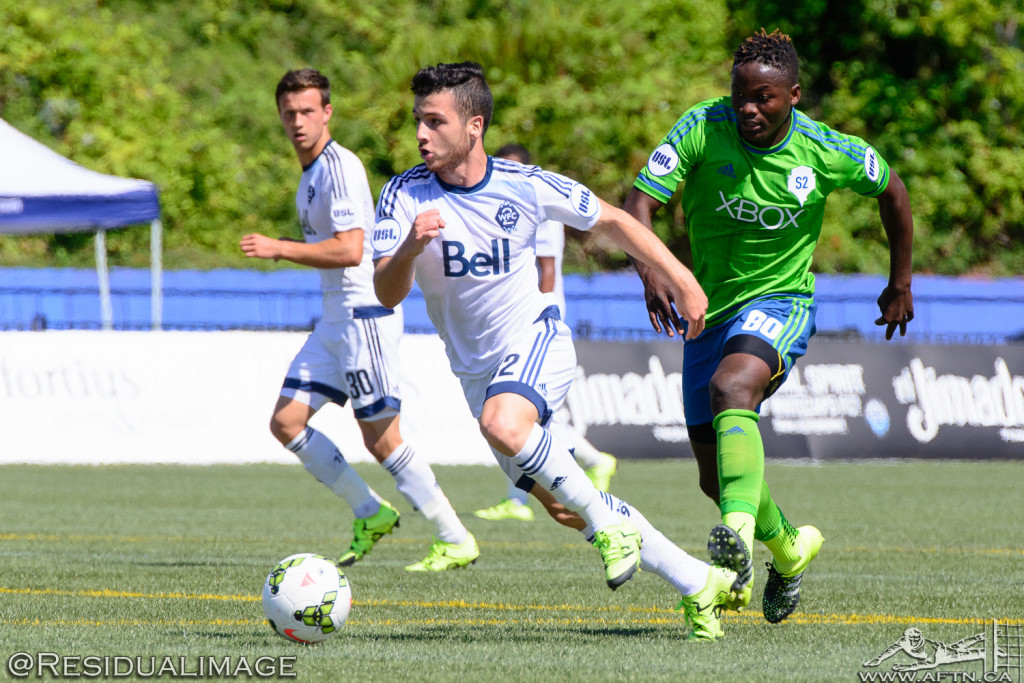