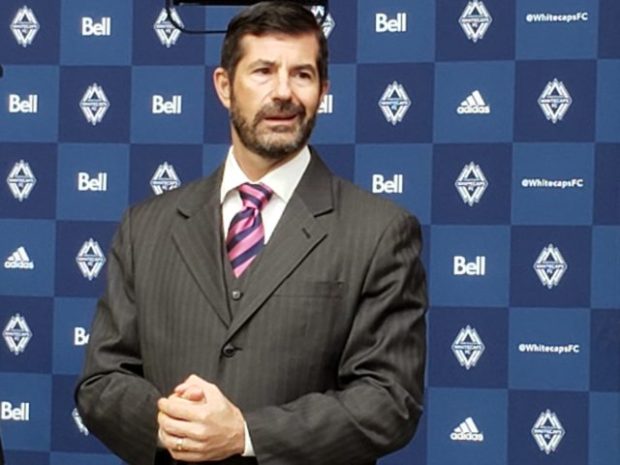 Vancouver Whitecaps never fail to surprise. Unfortunately it’s mostly one of those surprises akin to your doctor referring you for a colonoscopy.

As disappointing as the last couple of seasons have been for the Whitecaps on the pitch, they’ve been an absolute clusterfuck and a PR nightmare off it, stumbling from one embarrassment and scandal to another, many of which are still hanging around the club like a bad smell.

But in amongst the stink there was a breath of fresh air in the shape of the newly appointed CEO Mark Pannes.

A man who gave fresh hope to a long suffering fanbase, bringing supporter engagement and interaction, community involvement, and a feeling that the Whitecaps had finally made an appointment to make the club attractive again. Supporters were buying in to what Pannes was not only saying, but actively making happen.

There had been a global search lasting many months to find the right man for the job. Whitecaps minority owner Jeff Mallet was hailing him as “the missing piece” in his introductory press conference in January. Less than six months later, he is out the door.

It would appear that Pannes was a piece that didn’t fit the puzzle that is the Whitecaps front office.

Now let’s be honest. Sports fans don’t really care all that much for their teams’ executives. How may tears are really shed when one moves on? In fact in football, fans hound out many of them for what they see as underperforming or for being the cause for all their ills.

Seldom do you see an outpouring of unified supporter sentiment for a sacked football executive as we saw for Pannes’ departure among the Whitecaps fanbase. At least not in a wholly positive way. That in itself is testament to what he achieved in his short time here and the connection he made to the supporters, media, and community alike. He did that in just five short months.

Imagine what he could have achieved over his four full contracted years here. We’ll never know, or rather, we’ll never know here in Vancouver. I’m sure other organisations will be licking their lips at the chance to get hold of such a figure, just not the Whitecaps.

Mallett said that this was “not a popularity contest”. Just as well for the Whitecaps as they have been losing badly at that for years. Yet football is exactly that. You have to be likeable. You have to be a team that supporters want to support. You have to connect to your audience and get then to buy in. Pannes was getting the current, past, and future fanbase to do just that.

Pannes came to Vancouver with a rich pedigree in the business of sports, with 30 years of experience at organizations like the New York Knicks and AS Roma, and was the unanimous choice of the ownership from a shortlist of 41 potential candidates. He saw the Whitecaps as a challenge and a great opportunity. Maybe he failed to fully comprehend the dysfunction with which this club seems to run. Maybe he was too ambitious, but more on that later.

Pannes released a statement after his departure was announced saying that his job had been “eliminated”. Mallet on the other hand said, “we had a CEO in Mark and we have a CEO in Axel.”

When situations like these arrive, it’s always interesting to not only analyze what was said in the aftermath, but also what wasn’t and what you can read between the lines. Pannes was as classy as you would expect in his goodbye to the supporters, thanking many people along the way, but noticeably not the owners.

On the Whitecaps side, the man they had heralded just five months earlier, with Mallett describing him as “a student of the game and the business of sport”, was now being made out to not be the best man for the job after all.

“Mark added value in certain areas”, was a less than glowing compliment handed out by Mallet, who came across as trying to consistently downplay Pannes’ individual contribution to community involvement such as the recent Vancouver Aquarium facemask initiative, choosing instead to talk up the team that worked under him and was still there, just with a new leader.

The buzzwords to come out of the club’s press conference with Mallett, and the newly combined CEO and Sporting Director Axel Schuster, were few, but in plentiful supply – streamlining, one voice, one vision. Corporate jargon that wouldn’t look amiss in Bob Mortimer’s Train Guy videos.

‘One voice, one vision’ felt like the new ‘Our all, Our honour’. Words that look great on a wall, but in reality have little substance in them, unless you’re belting out Queen on the karaoke.

A lot was spoken in nearly an hour, yet very little was actually said in a very underwhelming presser of little substance that just left far more questions than answers and a lot of repetition of nothingness. I’m not sure anyone really came away with a clear understanding of what this “one vision” of the Whitecaps actually was.

Now we are not privy to the ins and outs of how the Whitecaps organisation is run. We can all be experts from afar from what we see publicly. The post Pannes press conference was the chance to address exactly what had happened and why the decision was made. Instead we got nothing more than “streamlining” and “effectiveness” thrown around, so we can only be left to draw our own opinions on it all.

If the club had come out and said that this was solely for financial reasons due to the pandemic, I think a large section of the fanbase would have had some sympathy and thought “fair enough”. But Mallett stressed in his answer to the very first question of the morning that “this is the opposite to a dollar decision”.

The tone was set. This was “a decision to be the most effective club”. To give the Whitecaps “one voice, one culture, one process”, and it was felt that Schuster was the right man for the job.

All very strange. As was the whole timing of this.

The fact that Pannes’ departure comes within his first six months in the job, coupled with them doing this while he was dealing with the death of his father and not waiting a few more weeks, suggests that the Whitecaps had to get this done by a certain date. Was there a probationary period in his four-year contract that would allow them to get rid of him for a lower payout? You actually hope it was that otherwise the optics are even worse than they already are on compassionate grounds alone.

So why did Pannes have to go? We’ve been told it’s not for financial reasons or because of the pandemic. If the club were wanting “one vision”, did that mean that there were conflicting voices at the top table as to what direction the club should move in?

Here’s what ticket reps have been telling some angry supporters:

“There was a difference in long term vision for the club between Axel and Mark. Ownership decided they wanted one voice in that respect and they felt more aligned with Axel’s vision.”

This totally contradicts what Mallett said at the presser, where he categorically stated that, “We’ve really been on the same song sheet internally. There hasn’t been friction.”

I was fortunate to chat with Pannes on a couple of occasions this year. His love of the game and his drive and passion to make the Whitecaps “a marquee club” were very clear to see. He wanted the ‘Caps to be a global team. He was thinking big and saw the opportunity we had in this city to create something special. He was genuinely excited by the prospect.

Surely this is the vision the Whitecaps ownership should have also shared? They were all in on it in January, so what changed in the subsequent five months?

So where exactly are we now? Well we have one man, doing two full time jobs, and I think it’s safe to say not for both the salaries. This is a lot to put on Schuster. On any man, never mind someone brand new to MLS. The reasons outlined in the press conference made it sound like the Whitecaps didn’t realise what skills Schuster had when they hired, and once they did they thought why pay two people when we can just pay one?

There are very few football clubs that I can think of that have their Sporting Director and their CEO as the same person. In MLS, Columbus and Inter Miami are the only ones to spring to mind.

One handles the on pitch side, one the business side. Pannes told us back in February that you wouldn’t find him commenting on the football side, that was Schuster’s remit. He would just be focused on the business side.

If you had to “streamline” and merge positions, surely Schuster’s Sporting Director and Greg Anderson’s VP of Soccer Operations was the natural choice? Both football positions. Both overlapping. Both still existing in the streamlined post-Pannes Whitecaps.

Schuster now has a greatly increased workload. What will this mean for Marc Dos Santos? The whole point of appointing a Sporting Director was the take the weight off the shoulders of the head coach to allow him to focus on the on pitch stuff. Will some of those aspects now be passed back on to him?

There are just so many unanswered questions and the tired fanbase are demanding not only answers, but new ownership, with the hashtag #SellTheCaps trending on Twitter on Wednesday night.

Some won’t really care. All they want is a winning team on the pitch. But others most certainly do. You just have to read a few social media threads to see that irreparable damage has been done with this departure. Factor in all the recent scandals that had seen some already walk away and others question whether they might, this is the potential tipping point of no return for the Whitecaps. It’s certainly the final straw for many.

For a club that is “losing tens of millions of dollars” during the current pandemic according to Mallett, this was not the way to address that, only add to it gauging fan reaction.

As for Pannes, his stock remains very high and his track record will bring many suitors. I have no doubt that he will be snapped up very quickly by an organisation with far more foresight than the Whitecaps. Whether his future lies in football or elsewhere is really all that remains to be seen. Whichever team is fortunate enough to get him though, they’ve got a good one.