What’s the worst thing a football player can do during a game?

When you ask many a football person, the answer isn’t diving or cheating. It’s spitting on an opponent.

And spitting is what Montreal Impact’s Nevio Pizzolitto is facing allegations about in a CSA disciplinary hearing on June 27th. In this situation though he is not being charged with spitting on a fellow player, but a Vancouver Whitecaps fan.

The incident is alleged to have taken place following the Voyageurs Cup semi final at Empire Field on May 4th and the allegations first broke on the Southsiders forum the same night.

That thread was later removed as the Whitecaps did their own investigation and spoke to witnesses before referring the matter to the Canadian Soccer Association. Since them, we’ve been waiting to report on the story but no-one wanted to write anything that could in any way prejudice the investigation and subsequent hearing.

Despite the witnesses to the incident, there is all that good old “innocent until proven guilty” malarkey and the fact that we all have to tippy-toe around using words like allegedly.

Canadian Soccer News ran a piece on the incident and the hearing yesterday, so we thought we may as well take this opportunity to weigh in now ourselves.

The fan at the centre of all this is Caps supporter, season ticket holder and Southsider, Ashley Perry.

According to Ashley’s version of events, he was one of a number of Caps fans chanting “au revoir” at the losers from Montreal, as they traipsed back to their dressing room after the Cup defeat.

The alleged gob could have hit any one of them and unfortunately for Ashley, it was him. 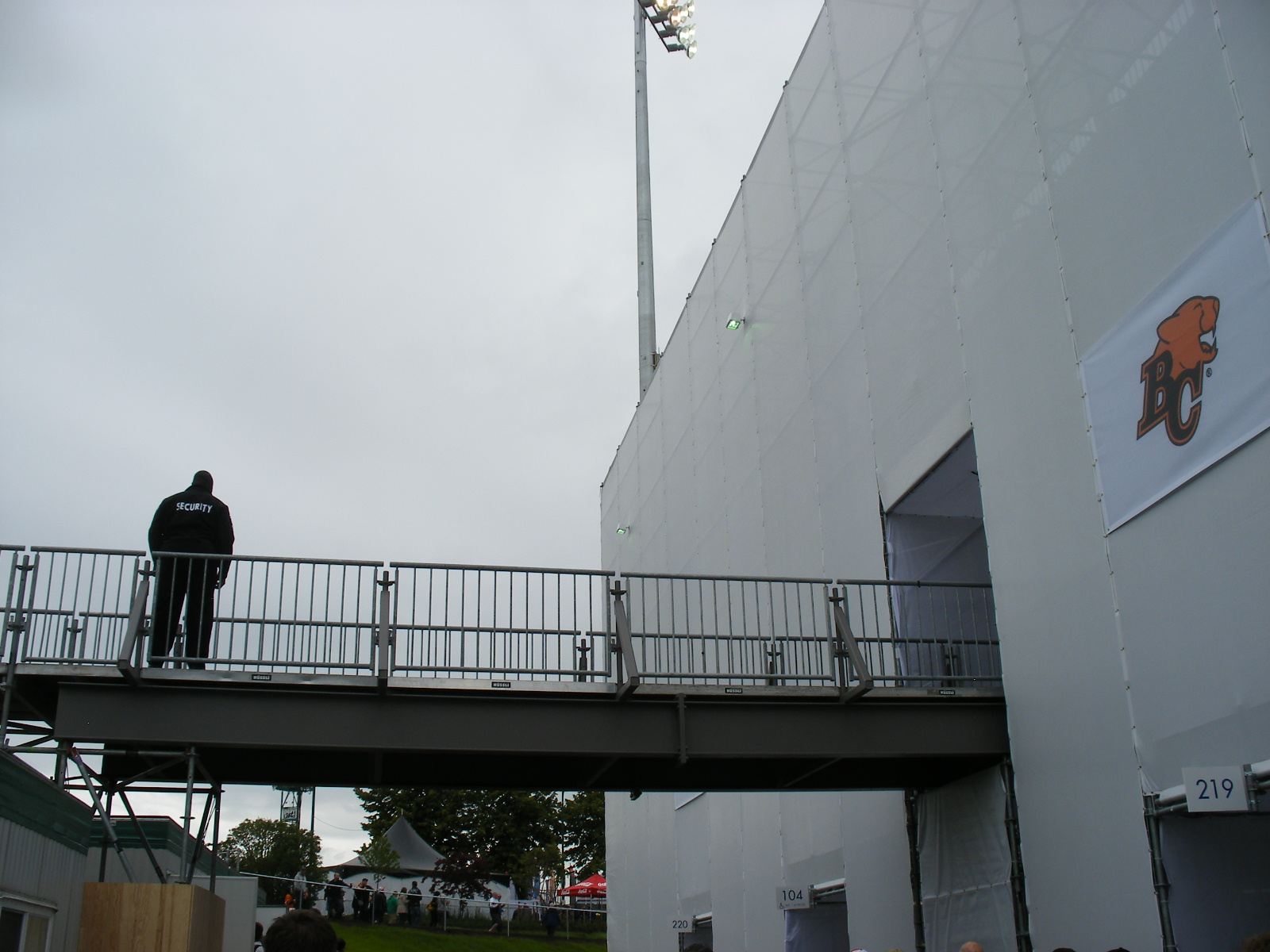 For those unfamiliar with Empire, the visiting players have to walk across this overhead bridge [left] to get to their dressing room.

It’s not ideal to have the fans of the home side underneath the players of the visitors, but it is one of the foibles of a temporary stadium such as Empire.

It’s an incident that Perry would like to just put behind him but there is a principle involved here.

If you’ve ever been spat at, it’s an awful feeling. To do such a thing makes you the lowest of the low.

Looking at the comments section on CSN, some Montreal fans are amazingly unapolgetic for the alleged actions from their team captain. Beggars belief really. Maybe they’re reserving any apologies for when they receive the official fate from the hearing. Not believing it to be true until he is found guilty or innocent.

Some will argue that fans don’t have carte blanche to shout abuse at opposing players. I’m from a country where pretty much anything goes verbally and it’s an accepted part of the game. I personally have a line in the sand, so far away that I can’t even see the sand.

But we’re not talking abuse here. This wasn’t the kind of provocation that caused Eric Cantona’s moment of madness at Crystal Palace all those years ago.

Stuff about race or player’s families can make them snap. Look at Zidane. Nothing that has been heard so far is saying that this was the case here.

It will be interesting to see if Pizzolitto argues otherwise and also what he pleads at the hearing.

I’m also very interested to see what Montreal Impact do with him if he is found guilty next week.

I can categorically state that if a Whitecaps player was found guilty of this, I would want him immediately released from the club and for the CSA to throw the book at him.

At least one team can come away from the evening’s events with their heads held high and that’s the Whitecaps. Speaking to AFTN, Ashley has nothing but praise for Paul Barber and the Club and how they dealt with the situation:

“Paul Barber and Rachel Lewis have been integral in providing timely and accurate witness reports to the CSA, I can’t thank them enough for the support they offered during the investigation.”

“As a Southsider, I think it’s vital that the club backs its fans and that’s exactly what the Whitecaps front office did. First class.”

Well done to all at the Caps for not just sweeping this under the carpet and standing up for their fans.

Ashley told CSN that he is “not out to ruin this guy’s career”. Very commendable. I don’t think I would be feeling like that.

If found guilty, Pizzolitto may have just done that to himself.