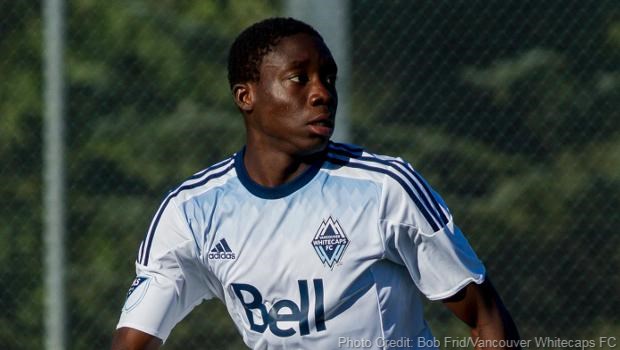 The upward trajectory of young Vancouver Whitecaps striker Alphonso Davies continued apace today, with the announcement that the Residency standout has signed a USL deal with the club for the upcoming season.

Davies, who only turned 15 in November, has impressed Carl Robinson and his management team in the short six month period that he has been with the Whitecaps.

The ‘Caps coach included the striker in his first team preseason camp, taking him down to Tucson, where he saw action in all three of Vancouver’s friendlies and grabbed an assist in the win over Houston. He’s currently down in the Portland with the first team for the Simple Invitational and is expected to see minutes in tonight’s game against the Timbers.

“Some people have called me crazy, but as I’ve said to you, it doesn’t matter how old you are,” Robinson told AFTN about his decision to include Davies in the Whitecaps’ preseason camp. “It doesn’t matter what your nationality is. If I see a good player and I see potential, then I will try and integrate that player into the team.

“And I’ve seen that, not just with Alphonso but with Kadin [Chung, who is also down with the first team] as well. I want to try and get them some experience, because it’s important that they learn how we do things.”

As Davies told us when we spoke with him recently after making his senior debut, it was a “tough decision” to uproot from his family and move out west from Edmonton last summer, but it’s a decision that’s certainly starting to already reap its rewards, although even Davies has been taken aback by how fast it’s all come about.

“When I came out here, I didn’t think things would go so quickly,” Davies told AFTN after signing his USL deal. “I really thought that it would take me probably a year to get all these opportunities, so I’m glad that they’re coming early and that they really believe that I can be a professional player at the club. I’m really happy for that.”

The USL deal rules Davies out of going down the NCAA college route in the future, but it certainly sends him down a strong path to a career in the pro ranks, in what is thought to be a four year deal.

Whilst acknowledging the importance of getting an education, Davies feels the chance to follow his childhood dreams of being a professional footballer is too good to pass up.

“My mom always told me to go to school first,” Davies admitted to us. “But I don’t really think that’s going to happen. My dream is to play football. And yes, I understand that school is important but the only reason that I came down here was to become a pro and that’s happening. So it’s very exciting for me.”

Davies is already straddling his time in the Residency this season between the U16 and U18 teams, but he knows it’ll be a much bigger jump moving up to playing regularly against older, more experienced and more physical USL players.

“Yes, much, much different,” Davies told us. “These guys have been playing soccer ever since they were young. Their speed, their passing, their shooting, it’s all accuracy of brilliance. With us, at U18 and U16, we’re trying to get there and they’re already here.

“So they’re trying to make themselves better and we’re trying to get where they are. And they’re much older than the U18 and U16s. They’re much stronger and much smarter than most of us.”

Davies becomes the latest Residency player to make the move into the Whitecaps’ USL side, following in the footsteps of Chung, Terran Campbell, and Thomas Gardner, who all signs their first pro deals last September.

“If you see potential in these guys, which I have, you try and map out their future,” Robinson told us. “You try and work out what is the next stage for them in their development and how quickly can they get into my first team group. Obviously we know that we’ve got the USL platform there for them, but I wanted to bring [Davies and Chung] on preseason to see actually, on a daily basis, whereabouts they are and they haven’t disappointed at all.

“We’ve got two fantastic young talents on our hands there and I did say to someone don’t be surprised if you see one of them at one stage during the season with the first team. I think that’s fair to say how much they’ve impressed me.”

Campbell and Chung were 16-year-olds at the time of their USL signings, with Gardner 17. The latest signing of Davies, at 15, will not only reiterate the now clear pathway between academy football and the first team, but it will also give a message to the rest of the Residency program that age will not hold them back if the ‘Caps see the talent with them.

Exciting times ahead for the Davies and the rest of the ‘Caps young talent.