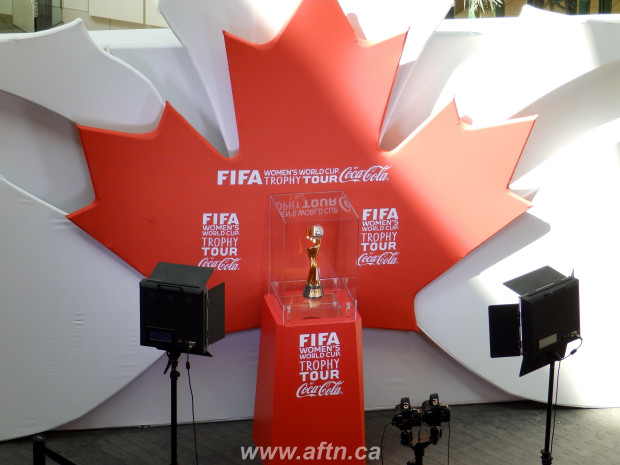 Two months, 12 cities, coast to coast. The Women’s World Cup trophy has been on quite the journey in Canada since April 1st.

With the 2015 FIFA Women’s World Cup all set to kick off in just over a week, the big question is whether the trophy will be remaining in Canada after the final on July 5th?

The tour kicked off in Ottawa and touched down in all six of the host cities for next month’s World Cup. In addition it headed to Toronto, Halifax and Calgary amongst other stops.

This weekend sees the end of the trophy’s journey across Canada as it reaches the city of the World Cup Final, Vancouver.

Well, technically it’s Burnaby as it’s at Metrotown Shopping Centre today, Saturday and Sunday. Admission is free and it’s open from 11am till 7pm at the Grand Court lower level.

Sponsored by Coca-Cola, this is the first ever tour of the trophy and similar to what Coke did in Vancouver during the 2010 Olympics, the event features interactive elements, a photo opportunity and a free commemorative bottle of Coke at the end of it all.

Interactive aspects feature a Beat the Goalie competition against a robot competitor that doesn’t quite have the loud commanding presence of David Ousted. There’s also two foosball tables and chance to visit the “locker room” where jerseys are hanging commemorating the four countries that have lifted the trophy since 1991.

The scary/sexy owl mascot Shueme and some football freestylers are also meant to be there but they weren’t when we headed along on Friday.

In fact, neither were the crowds!

It was very quiet and when one of the volunteers asked us if we knew it was on or if we’d just stumbled across it, she was surprised when we said that’s why we had headed to Metrotown. Apparently, not many others have known about it.

I do have to say that it is somewhat indicative of the whole tournament here in Vancouver so far. There’s been little buzz, little hype and little promotion that I’ve seen around the place, but hopefully this will change once the competition gets into full flow next week.

The pinnacle of the tour is the trophy itself and once you’ve had your fun in the interactive sections, you can head through the “Winners Tunnel” to have your photo taken with the actual Women’s World Cup trophy. Well beside it as it’s encased in glass.

You can’t take your own pictures but someone is there to take them for you and print off a couple of copies for you to keep.

All that’s left is to make your way out, pick up your special limited edition Women’s World Cup bottle of Coke (regular, light and zero varieties available) and outside the attraction you can get your picture taken at a TSN Sportscentre desk.

The whole thing is likely to take you 5 to 10 minutes to go through once you get to the front of the queue. We expect it will be bust at the weekend, so head along if you can for a fun memento of the World Cup. 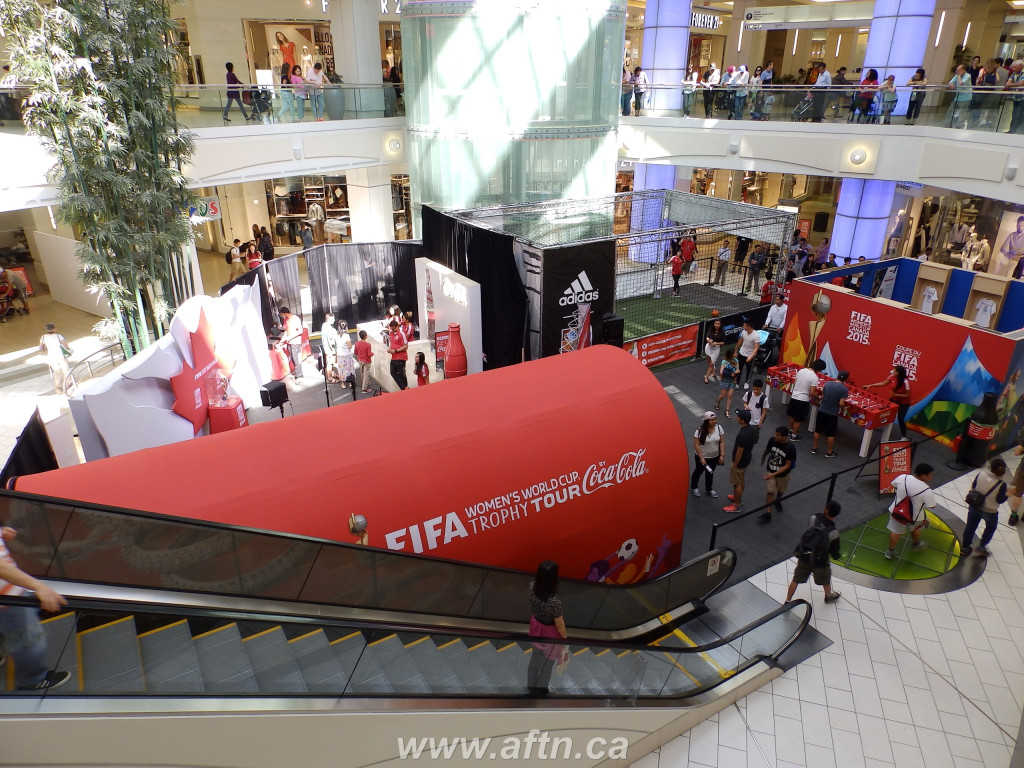 The Trophy Tour in all its glory 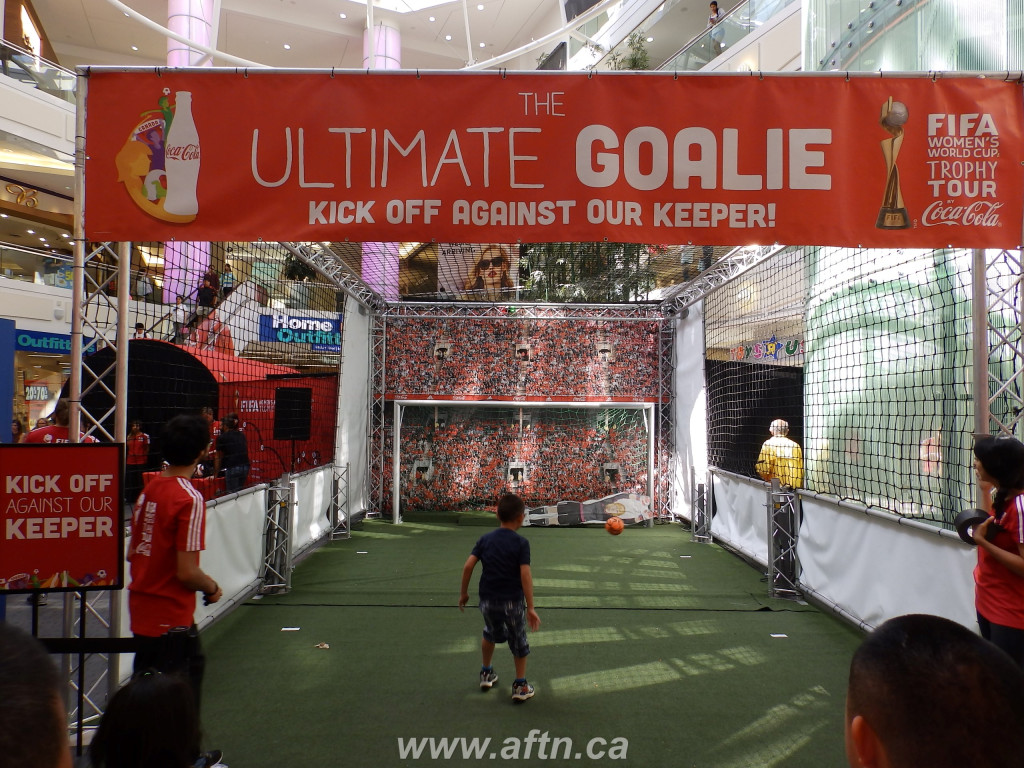 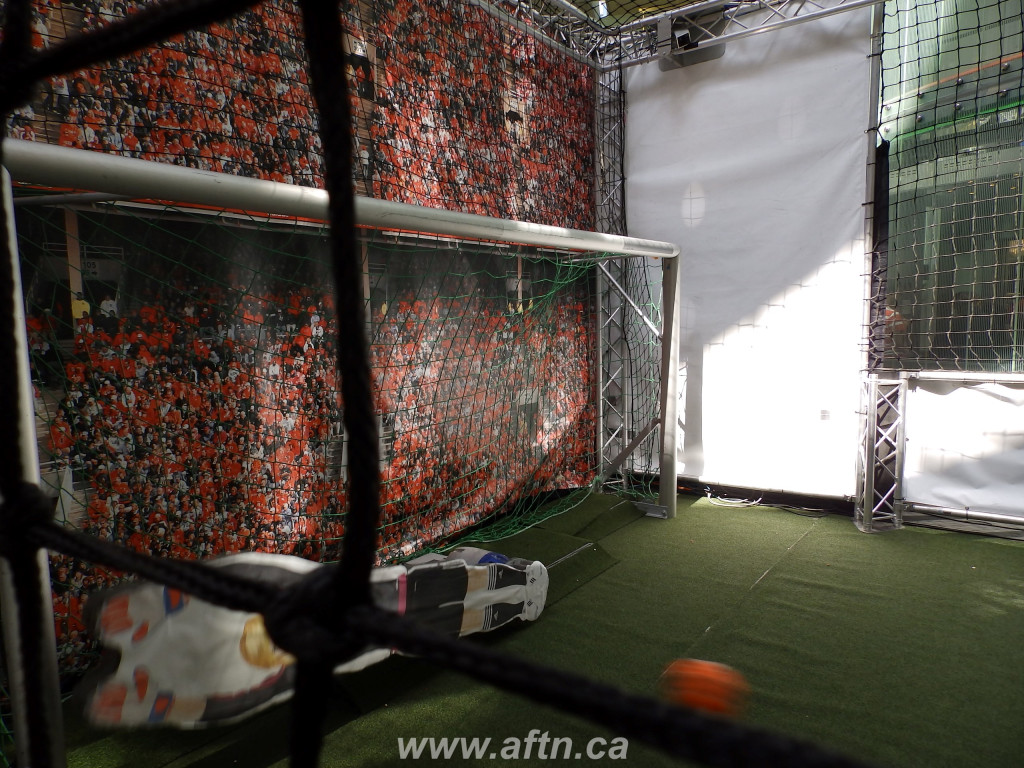 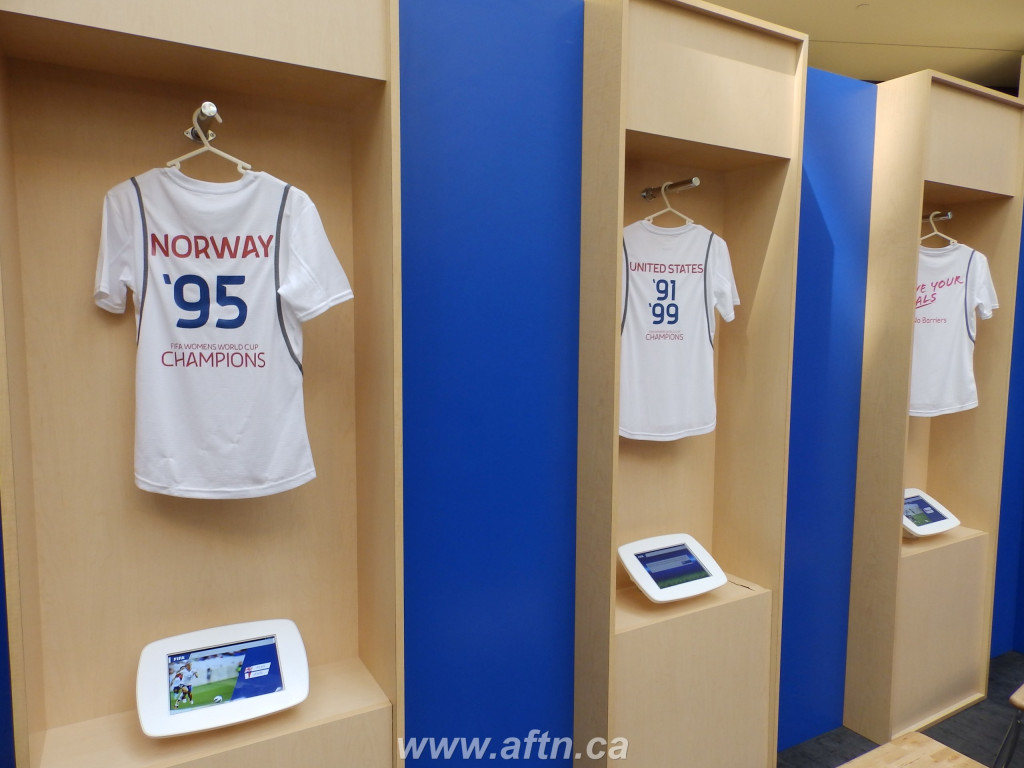 Will a “Canada 15” shirt be hanging on the next Trophy Tour? 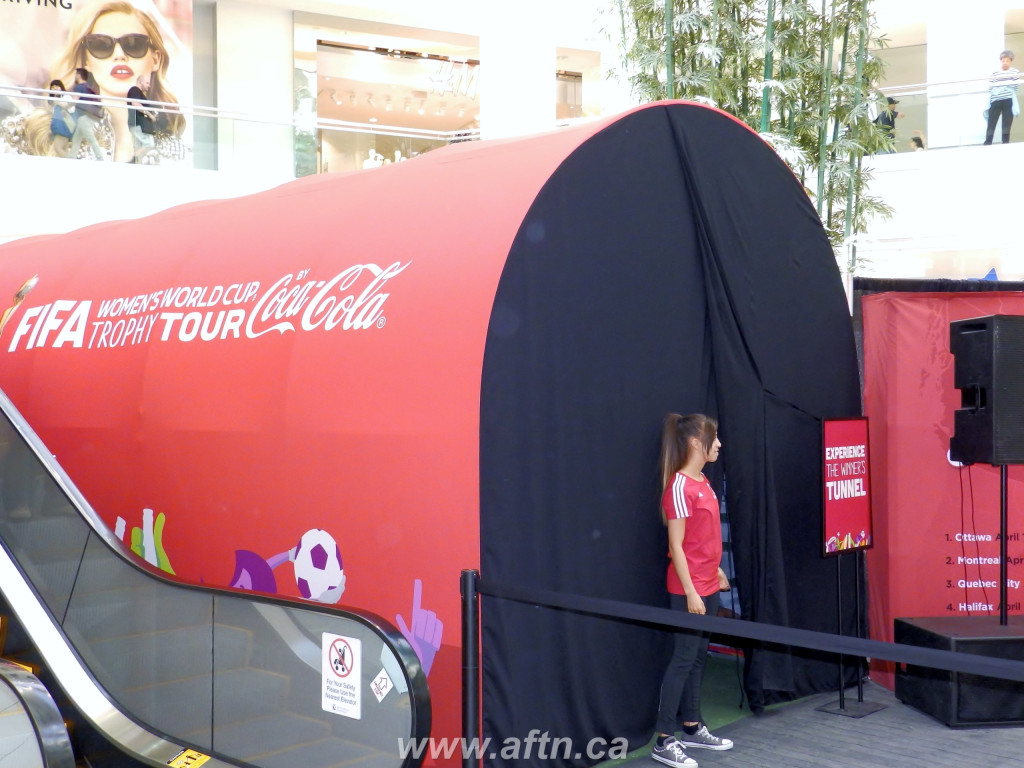 The “Winners Tunnel” – we’re pretty sure everyone we saw enter actually left, apart from that kid in the TFC shirt 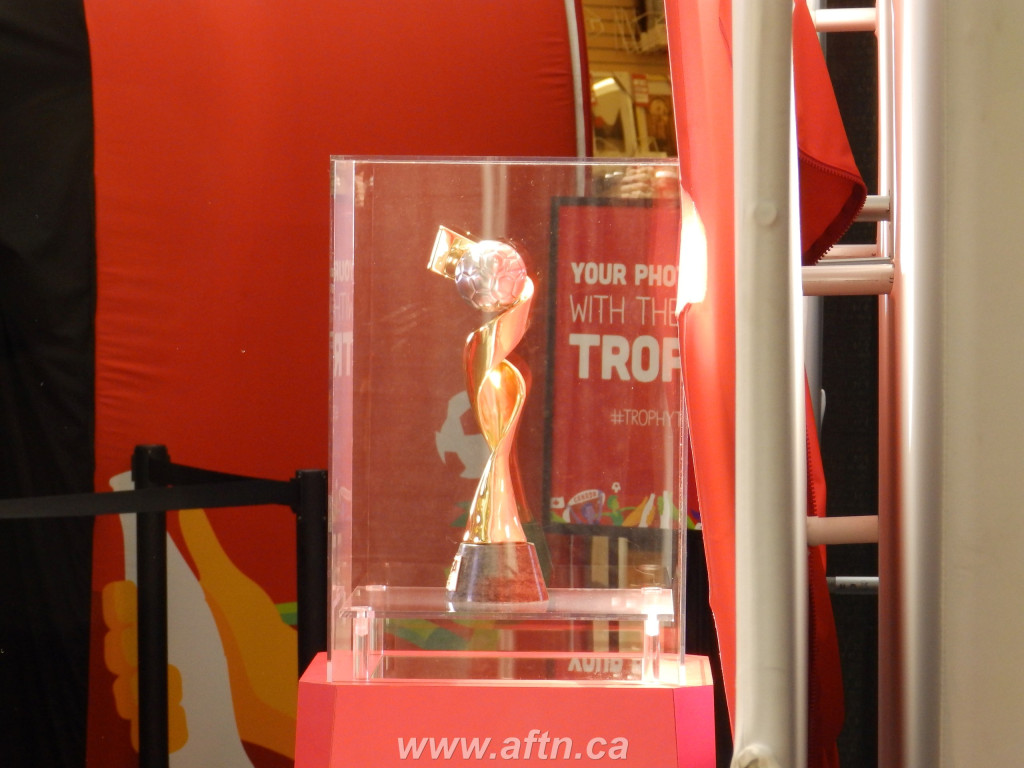 The Women’s World Cup trophy in all her beauty 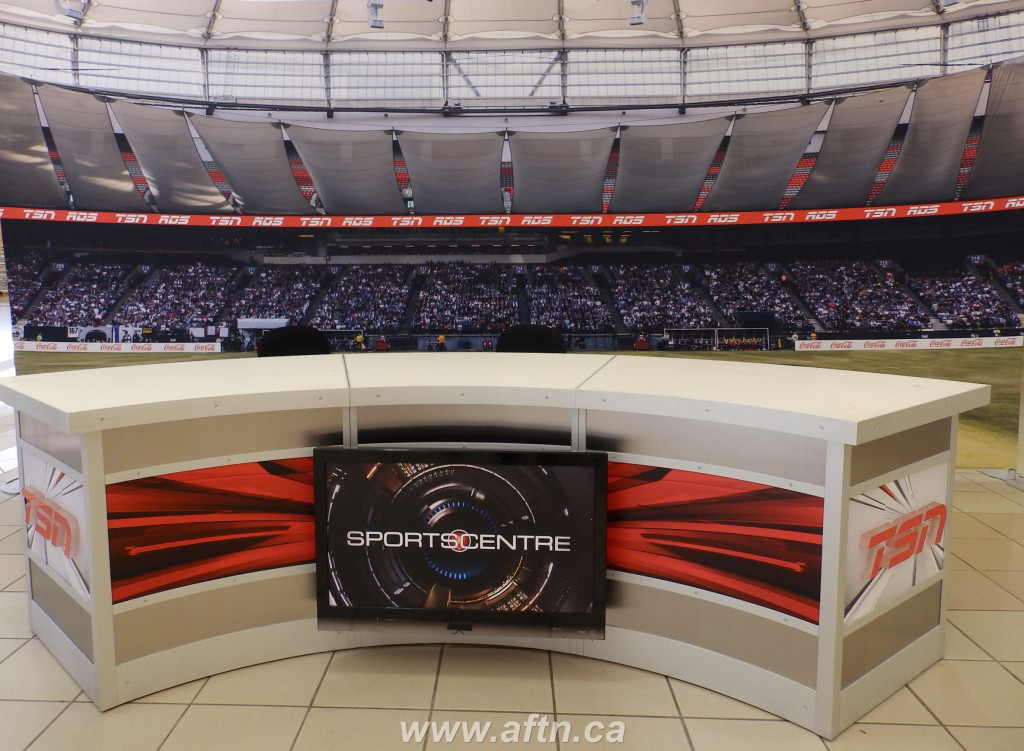 Your chance to be a TSN reporter for the day

And if you want to see more photos, check out the slideshow below: