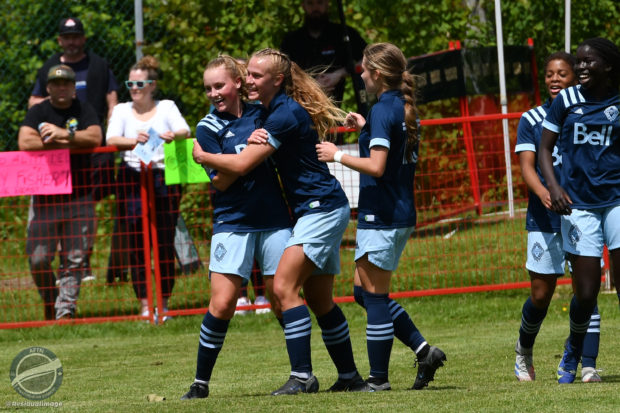 [For the basis of this round-up, we’ll be looking at matches played from Thursday May 26th to Wednesday June 1st]

With week two of the inaugural League1 BC season done and dusted, there’s a clear frontrunner in the women’s division. A six point haul over four days sees Vancouver Whitecaps Elite team topping the table with a 100% record from their first three matches, but the battle for second is a logjam of four teams all on three points. 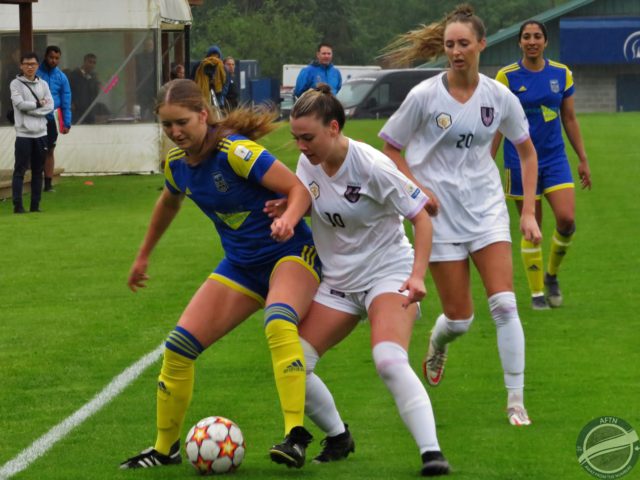 The action kicked off in Langley on Thursday evening as Varsity FC kicked off their L1BC campaign in impressive style with a 2-0 win at Unity FC in very wet conditions.

Varsity looked strong from the start and took the lead in the 36th minute when Sophie Damian cut the ball across goal to Holly Ward. Her first effort came back off the post (or keeper) but the rebound came straight back to her and she wrote her name in the history books by knocking it home and grabbing the club’s first ever goal.

Varsity were the better team but had to wait until seven minutes from time to seal the deal when Aman Shergill broke up the right and slotted home to make it 2-0.

It was just what Varsity wanted to kick off their campaign, and head coach Jesse Symons was naturally delighted.

“I think both teams are still finding their way,” Symons told AFTN after the match. “Unity’s a very good squad. I feel both teams will find their rhythm as the season wears on and they start playing more together and they get more time in training, but as the game wore on I thought our special players showed through.

“We scored a great first goal, cutting down the left and creating an easy goal. We thought too that in the second half we’d be able to add a few more attacking units out there and Aman does what she does and can ran past people. And what a finish. It was pretty classy to slip it past the keeper at the end.”

With a bye in opening weekend, did having that extra week together help Varsity in their preparation and scouting for this one?

“We wanted to play opening weekend for sure, but it wasn’t meant to be with the scheduling,” Symons told us. “I think it was great we got this Thursday night match. Overall we were ready to go after it. We had some good training sessions and I was pretty proud today of the performance in our very first match ever.”

They’re only one match in but you can be pretty sure that Varsity will be there or there about come the championship game in August, and the UBC based side, along with the Whitecaps, look the early class of the field in the women’s division, but there’s still a lot of football left to be played.

The Whitecaps were certainly made to battle hard to get their two victories in this week, coming away with a 2-1 win at Altitude on Sunday and following that up with a 1-0 win over Unity on Wednesday evening. 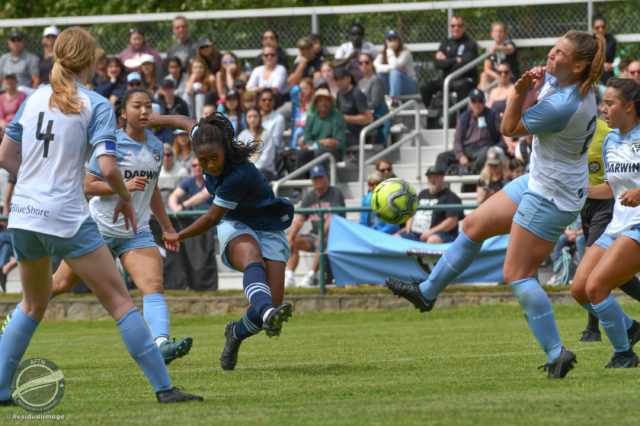 Kinsmen Park in North Vancouver was the setting for Altitude FC’s historic first ever home matches on Sunday and a sell-out crowd of 700 packed in on a beautiful sunny day to take in all the action.

The Whitecaps were coming into this one off the back of a 5-1 beating of Highlanders FC the weekend before and when they went 2-0 up early, I’ll admit, I was worried this might get out of hand, but Altitude regrouped, had a disallowed goal before half time, and fought mighty hard in the second half, reducing the deficit to one, but unable to find the equaliser the packed crowd were cheering for, all backed by an absolute sublime goalkeeping performance from Kelsey Fisher.

Fisher was in action early, producing a couple of key stops, but she couldn’t keep out Ashley Roberts effort in the 12th minute as the Whitecaps eventually saw their pressure pay off.

Thought I'd shared this the other night, but turns out I attached the wrong video. So here it is properly:

After Fisher denied them some more, Olivia Ahern got the second the ‘Caps play deserved in the 28th minute, but Altitude weren’t about to admit defeat in their home opener that easily.

Allie Hughes-Goyette thought she’d pulled one back in the 36th minute for Altitude, but the flag was quickly up, but she wasn’t to be denied and scored the first ever goal for Altitude’s women’s team in the 69th minute to set up a storming final 20 plus minutes.

Both sides went for it, but neither could add to the scoring and the ‘Caps came away with the 2-1 win.

There was little rest for the young Whitecaps side and they were back in action on Wednesday night at Ken Woods Field and were made to work hard again for all three points but a determined Unity side.

In the end it was settled by a third goal in as many games from Ashley Roberts, who ran in on goal and finished with aplomb into the bottom corner on the hour mark.

That win made it nine points out of nine to start the L1BC season for the Whitecaps and they have a six point lead at the top of the table.

TSS Rovers are now one of four teams chasing them on three points and they got their first win of the season in Kamloops with a strong showing in a 3-0 victory over Rivers FC.

Raya Athwal scored two goals in a three minute spell just before half time to put TSS two up and Jessica Merk put the icing on the cake in second half stoppage time, to make it a much more enjoyable long trip back to Vancouver.