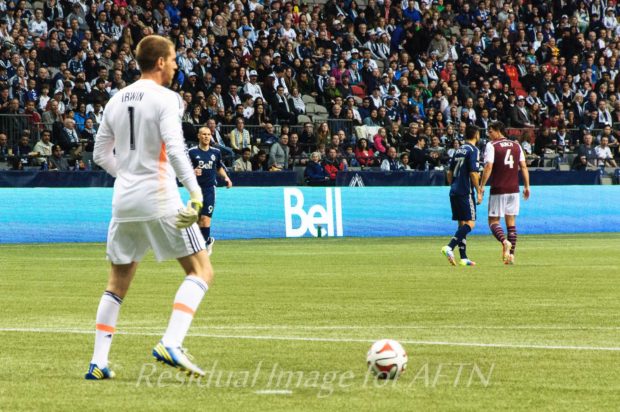 In our “Around The League” series, we chat with some of the more interesting and sometimes lesser known players from the team that Whitecaps meet in MLS action. We kicked off the new series last week with Houston Dynamo’s Andrew Driver, and continue it this week with the man who proved to be a real thorn in Vancouver’s side this past weekend – Colorado Rapids’ goalkeeper, Clint Irwin.

Call me an old football romantic, but I like a story of an unexpected hero. The underdog who comes from nowhere to be the star.

There were very few people out there who picked the Rapids to be serious playoff contenders. With some young, but promising, draft picks in place, and a string of early injuries, you could see why it was felt by many to be another rebuilding year for the 2010 MLS Cup winners.

But the rookies came good and a lot of Colorado’s success stemmed from the impressive play of Irwin in his debut MLS season.

It wasn’t in the original script. The 23 year old Irwin came to Colorado as the third string keeper, having only made three appearances the season before for his hometown Charlotte Eagles in USL Pro.

He was behind first choice keeper Matt Pickens and back up Stewart Ceus. By the fourth game of the season, he had won the starter’s spot and he wasn’t to relinquish it for the rest of the year.

Pickens had started the season off with a slight injury, allowing Ceus to start First Kick against Dallas. He had a bit of a howler and Pickens was back in goal for the next game, with Irwin on the bench. When Pickens went down with a broken arm in the third game of the season against RSL, rookie Irwin came on and never looked back.

He went on to make 33 appearances for the Rapids last season, keeping ten clean sheets as Colorado made the playoffs.

It was a great first year in Colorado for Irwin and the team. How do they both follow up on that this time around?

“As a team we’re just looking for more success. We have a belief in here that we can not only compete in this league but do well. Our goal isn’t just to make the playoffs.

“We have Pablo behind us and he wants to instill in us that we can win the MLS Cup. After a game like this (win in Vancouver), that belief is only going to grow.”

Who’d be a goalkeeper? The outfield players get the most plaudits after wins, but you get held up to most scrutiny when your mistakes cost you a game. As a back up, you often need the latter to happen to get your shot.

Getting you chance to impress doesn’t come along all too often, but when it does, you need to take it and that’s exactly what Irwin did. At one stage though, a MLS career seemed to be a long way away.

After a strong college career at Elon University, where he set single season and career clean sheets records, Irwin caught the attention of New England in 2011 but didn’t make the cut and he ended up playing in the Canadian Soccer League that season.

“I was on trial with a bunch of teams. First in MLS with New England, and then with various teams in NASL and USL. I just really didn’t get picked up. Then I got an email from a team up in Ottawa, Capital City FC, and that was really my only option at the time.

“So I went up there and was just trying to continue my career. I think it’s great for young players. I know it’s had it’s difficulties since then, but I think if they can get it or something similar up and running it’d be great for Canadian soccer and even some of the American guys that fall through the cracks.” 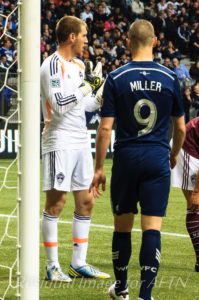 Irwin made 22 appearance that season and even scored a goal against Windsor Stars. His play earned him a chance with Charlotte Eagles and his career has been on the rise since. Good to see some sort of CSL success story.

As luck would have it, a quad strain picked up by Irwin meant that Colorado started another season without their first choice keeper. Rookie John Berner came in and did well, but, as Vancouver found out to their peril, Irwin is now fully recovered and made his first appearance of the season last weekend in the win over Vancouver.

How did it feel to be back out there?

“It felt great. First half I felt I was a little rusty, just trying to get back in the swing of things. I had played a couple of reserve games but it’s different when you come on the road in front of 20,000 people. But it felt good to back out there and just get back in the rhythm.”

And back he was, coming up with a vital save to turn a Pedro Morales shot around the post and keep his Rapids side within one goal.

“It was just one where you try and make yourself as big as possible and come up with the save. At 1-0 you’re thinking 2-0 is going to be difficult to come back from and I’m just trying to keep us in the game a little bit.”

It proved to be key, with the game changing completely 12 minutes later. Matias Laba’s sending off and two wonderstrikes from Jose Mari and the Rapids headed home with an unlikely win, but one which saw us speak with a very happy Irwin after the match.

“I thought the team played really well. We kept the ball well. Maybe we could have been more penetrative with our balls in our runs, but we hung in there, came up with two great goals from Jose Mari and it’s just a great result for us on the road.”

Last year it came down to the wire for both Colorado and Vancouver. The Whitecaps wasted their chance to put themselves in the driving seat in the penultimate game, handing the Rapids that final playoff place.

With the way things are shaping up, you wouldn’t dismiss those same two teams battling it out for the fifth and final playoff spot this year around as well. As such, Irwin is fully aware of the importance of winning such a game against a potential key playoff rival.

“It’s very big for us. I think at the end of the season last year we played two of our last four games against Vancouver. We came up here and really struggled and they really stuck it to us. This is a really difficult play to play and I think Vancouver plays really well here. The fact that we can take three points from here is going to be huge for our season.”

With Pablo Mastroeni coming in this offseason to replace Oscar Pareja, the pressure is on the first time coach to continue the Rapids rebuild. What was very noticeable last weekend is that all the players seem to have already bought into what he is hoping to do in Colorado. It’s a striking similarity to what Carl Robinson has got here in Vancouver.

Irwin has liked what he’s seen so far of his new coach.

“We have a lot of the same players, so the approach hasn’t changed much. We want to keep the ball. We want to play attacking. Pablo doesn’t make any defensive substitutions. He just wants us to keep going and focus on the belief and it’s been refreshing.”

A lot of eyes are on Colorado this year. Will they surprise again? Will the standout rookies suffer that infamous, and somewhat overstated, sophomore slump?

Some of them may indeed drop off in form a little, but you get the feeling that Clint Irwin isn’t going to be one of them and could, once again, be a key difference maker between the Rapids making the postseason or not.

[We’ll bring you another “Around The League” next week and staying in Colorado, we’ll chat with MLS 2013 Rookie of the Year, Dillon Powers]