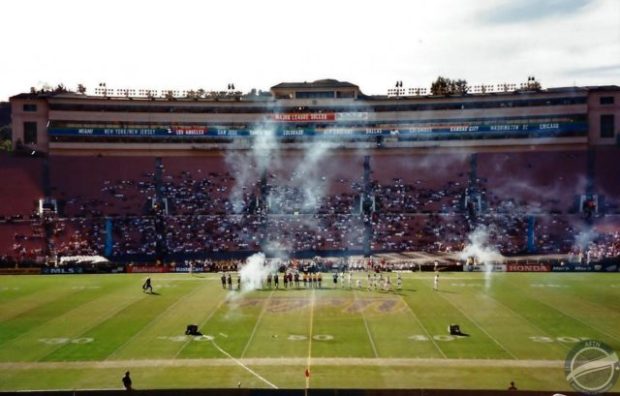 Major League Soccer celebrates its 25th season this year. With football around the world suspended indefinitely, it doesn’t feel much like a celebration right now and probably explains, in part, why the league is still talking about playing a full 34 game season.

That target seems more unlikely with every passing week, but MLS has confounded critics for many of its quarter of century of existence.

Born out of the success of the 1994 World Cup, as an outsider looking in, it always felt that the game was fighting an uphill battle to be taken seriously here. That 1994 World Cup was my first trip to America. We were based out of Detroit of all places. Not where you would expect someone to pick for not only their first trip to the US, but also their ever first trip overseas (although we flew in and out of Toronto).

This was my first taste of football outside of the UK, and it was a fantastic all-round experience that left me craving more. I loved the stadiums, the razzamatazz, the colours, sounds, and fans from around the world. It was as different from lower league Scottish football as you could imagine.

I’d read about the new league starting in the US following the World Cup – Major League Soccer. I was intrigued. As a kid I’d seen snippets of the old NASL on TV and it seemed like an alien environment. Was this going to be the same? MLS was meant to start the following year, but was eventually postponed till 1996. Ten teams took part, nine of them are still around today, albeit four of them under different monikers.

You didn’t really get much news about the league back in Scotland, just the odd article in football magazines like When Saturday Comes, but I yearned to go back and take in a league game at some point. After booking a Halloween trip to Los Angeles on a whim, I finally got the chance four seasons into the league, and took in my first ever MLS match at the Pasadena Rose Bowl on Sunday October 31st 1999. 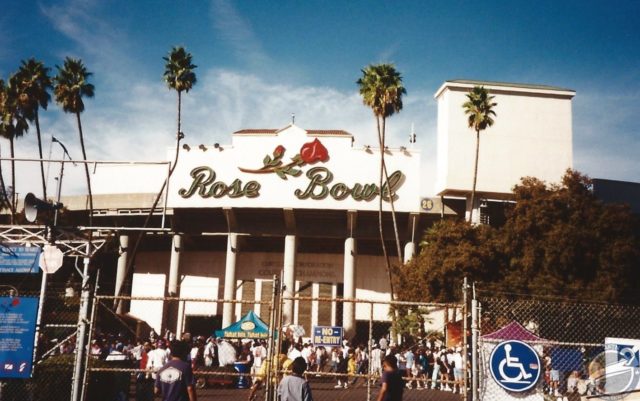 This wasn’t just an ordinary regular season match either. It was a Western Conference Final, or at least game one of a best of three series.

Already, I was in alien territory. Why was this not a one-off match or at the very least a home and away two legged series?

The booking of the trip and getting to see the game itself was purely coincidental. I’d booked the trip to go and see Universal Studios and Disneyworld and all their Halloween festivities that went with it. The football was just a lovely added bonus, and so it proved to be.

The game itself saw LA Galaxy hosting Dallas Burn (as FC Dallas were called until 2005) at the cavernous, and historic, Rose Bowl. I knew of the iconic stadium, having seen it host games during that ’94 World Cup and at the 1984 Olympics. The chance to see a match at a stadium that had hosted a World Cup final was an added excitement for a football geek like myself. 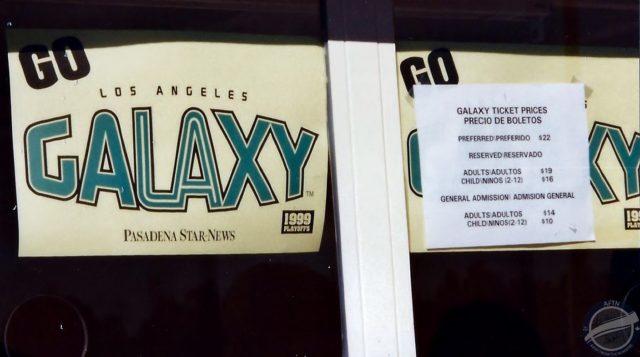 Staying in Hollywood, the journey to Pasadena, on a Sunday with LA’s terrible public transport system at that time, was a long and arduous one that saw me getting to the city a long time before kick off, with no real idea where the actual stadium was. My memories are sketchy but I remember grabbing a bite to eat at a cafe and buying a Los Angeles Times to read about the game.

I still have the cuttings of the match preview that was written by Grahame L Jones, a writer that stayed with the Times covering the game until he retired in 2011, much to the joy of local fans it would appear from a quick internet search.

I eventually found my way to the Rose Bowl, not really sure what to expect. I knew it would be a very different experience to what I was used to, and it certainly was, but an enjoyable one. 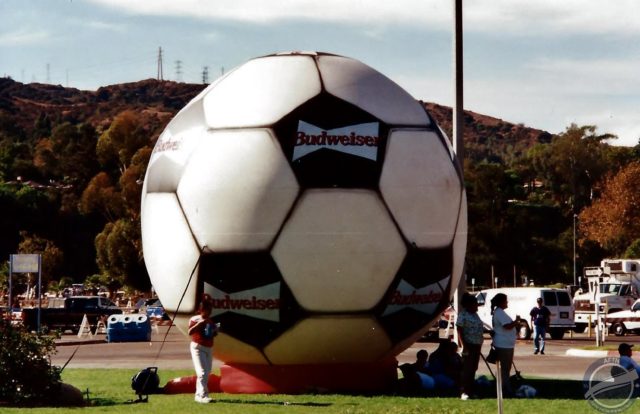 I wandered through the pregame tailgating, not knowing exactly what that was at that point in time and genuinely curious, as we just headed to the pub closest to the ground before East Fife matches. It helped of course that it was a lovely warm sunny day (33 degree celsius). It wasn’t like a bitterly cold trip to blustery Arbroath.

I don’t know how long I spent wandering around trying, unsuccessfully, to find a programme, but I remember doing it. To my knowledge there wasn’t one, but if there was, I would love to get hold of a copy. My fruitless search did produce a couple of other freebies – a Galaxy licence plate holder, which I kept until just a couple of years ago for some weird reason, and a player profile card for Galaxy defender Ezra Hendrickson, which I do still have!

Little was I to know that 18 years later I would be interviewing Hendrickson when he was coach of Seattle Sounders 2 in the USL. Life does take the bizarrest of turns sometimes. A ticket was procured for $14 for the General Admission section (afterwards I found a ticket on the ground for a different section and kept both as a souvenir – like I said earlier, I’m a football geek!) and in I headed, still not sure what to expect.

What I found blew my mind and senses on a number of levels.

As a visitor with a general admission ticket, I had no idea where to stand. I wanted to be in the ‘home end’, not realising that such a thing didn’t exist and the hordes of travelling fans I was expecting did not exist either.

The vastness of the stadium was also something to behold, especially with so much of it being empty. Was it going to fill up? If not, why were they playing their matches there? I knew nothing of the logistics of the league and was truly baffled.

What I also didn’t expect was the cacophony of different noise that greeted me from the different supporters groups. Not did I expect that these supporters groups would be split up in their own little sections, each seemingly singing and chanting different songs, yet supporting the same team. 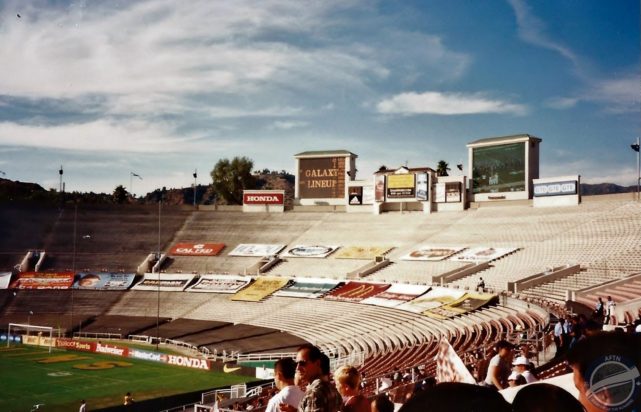 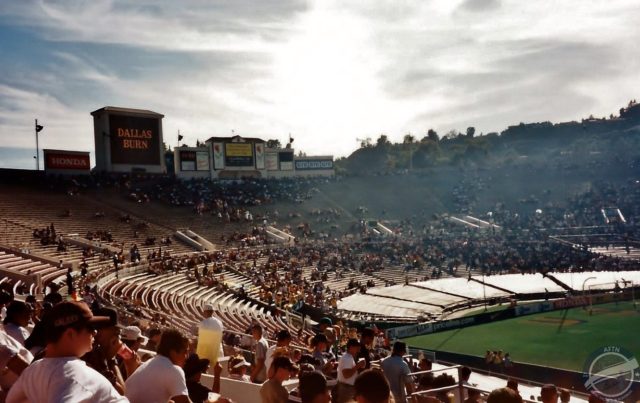 Looking back on it all today, I still find it weird.

My memories of the day were that the groups seemed to be split up by the country they had heritage to. National flags were in with the banners supporting the team, with several different countries represented and it felt like never the twain shall meet, which creating something of an intimidating atmosphere for someone not used to seeing it.

I remember it genuinely felt like something was going to kick off amongst the home supporters at any minute. Probably falsely felt, although it would be interesting to hear from anyone who was actively supporting the Galaxy at that time to reveal just what it was like supporting the team back then. 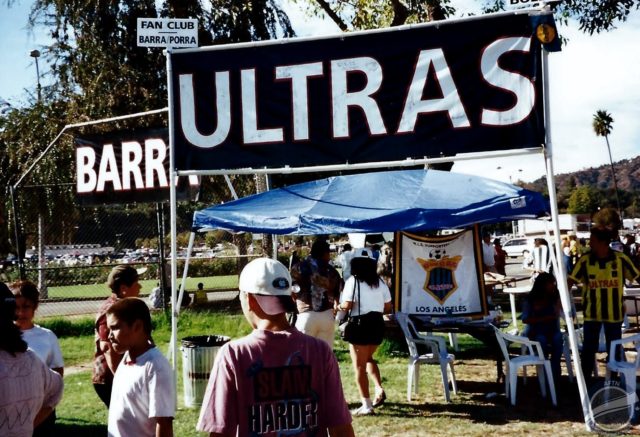 Looking at the photos I took that day, I wonder how many are still with the team? How many made the move to Carson with them? Are they still active in the supporters community? How many made the switch to Chivas USA (RIP) or LAFC, and how many just drifted away altogether?

The Galaxy had made the first ever MLS Cup in 1996, losing 3-2 to D.C. United to a golden goal in extra time. They’d lost the 1998 Western Conference Final, with Dallas losing the 1997 Conference final, and although they went on to make, and lose, the MLS Cup in 1999, the Galaxy had to wait until 2002 to claim the first of their five championships.

They were the favourites heading into this match. LA had topped the Western Conference regular season standings, finishing three points ahead of Dallas, but the Burn hadn’t won in their last six visits to the Rose Bowl.

When you look back at the teams that day, it’s a veritable who’s who. 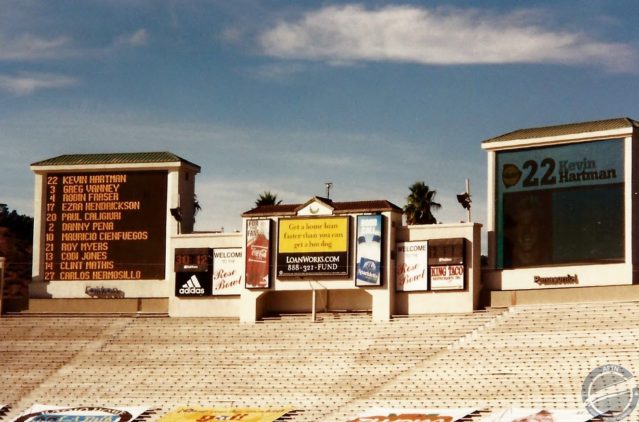 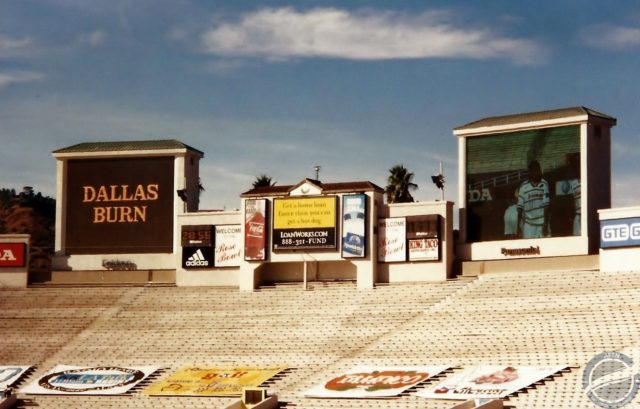 The legendary Sigi Schmid was coaching the Galaxy that day, while a man who was later to become the Whitecaps chief scout, David Dir, was in charge of Dallas.

Certainly some names to reminisce about there.

The pregame razzamatazz was another unique experience for me at the time, and seemed to go on for far longer than it should have. No change there 20 years down the line, but the game did eventually kick off. 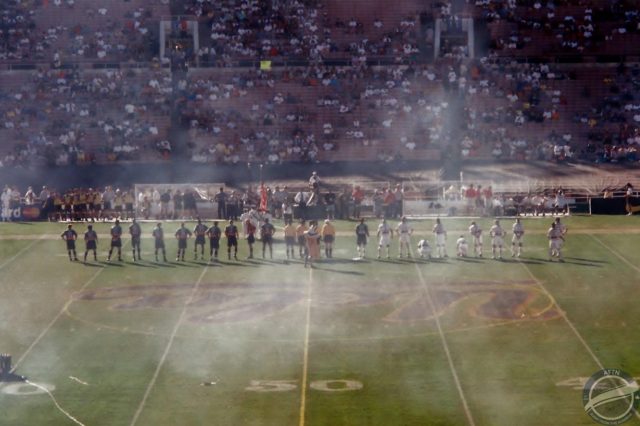 The teams line up for the anthems 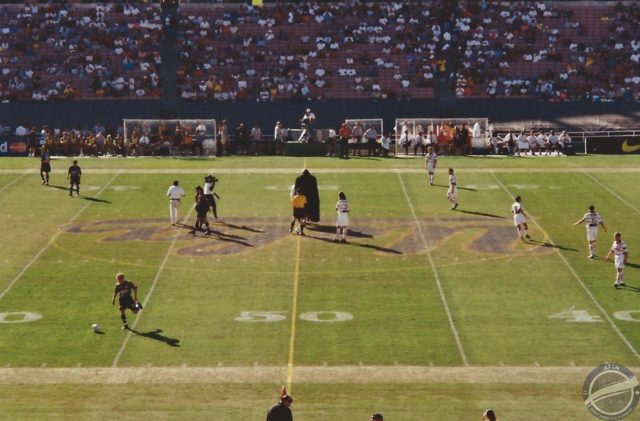 Not quite sure why the grim reaper is out there, unless it was a Halloween theme 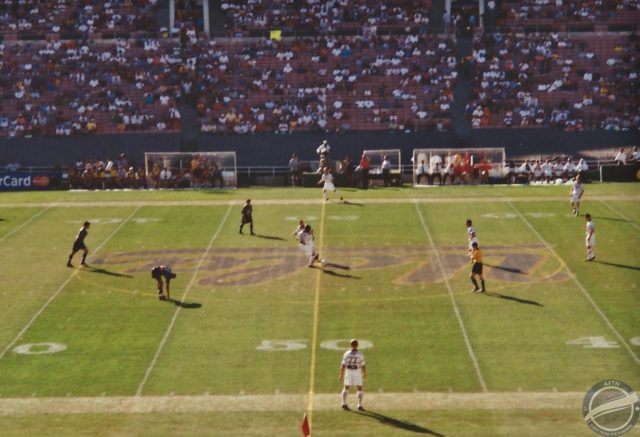 My memories of the game itself are basically nil, bar what happened at the end. Unable to find highlights on You Tube, I’ve had to make do with a match report to try and jog my memory.

Cienfuegos gave the Galaxy the lead six minutes before half time, firing home a free kick. Ecuadorian striker Ariel Graziani levelled for Dallas in the 75th minute and extra time loomed, some excitement I was looking forward to. But I never got to experience it as up popped Hendrickson to fire home a 90th minute winner from what was described as “an impossible angle”.

The man beaten in the Dallas goal that day being someone who would become familiar to Whitecaps fans at Swangard in years to come, the infamous Montreal keeper Matt Jordan.

I remember the crowd going nuts, and everyone went home happy, myself included. 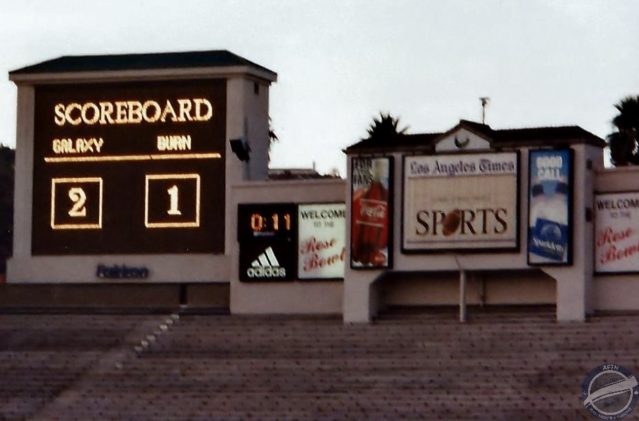 The second game of the series took place in Dallas a week later with the Burn winning 4-3 on penalties after the teams finished level at 2-2 after extra time.

That set up a showdown back at the Rose Bowl four days later. I was back in Scotland by that point, but the Galaxy triumphed 3-1, advancing to the MLS Cup, where they went on to lose 2-0 to D.C. United.

It’s strange looking back at the game and my day over 20 years later. At the time I never for a minute thought that I’d be living in North America, let alone interviewing many of the players on the pitch that day. But strangest of all is that looking at those photos and recounting my memories of that day, it feels like bygone times of yesteryear, not just 20 years ago.

The league has changed beyond all recognition in that time. Every single aspect of it.

We’re at 26 teams now, with four more soon to come on board. A far cry from the 12 teams of 1999, two of which (Tampa Bay and Miami) soon bit the dust. We have soccer specific stadiums, with games not played on American football marked pitches (for the most part). The jerseys back then look so dated, the team names not as ridiculous now (again for the most part). MLS is simply far more professional.

All to be fully expected for a league with 25 years now under its belt.

It’s fun to look back. It’s also fun to look forward and ponder what the league and the game might look like here 20 more years down the road. It’s no longer the butt of jokes on late night shows, as it was when I was first over in 1994. It’s a growing part of the North American sporting scene, and it’s hopefully only going to get even better and bigger.

Let us know your first MLS match experience if it pre-dated the Whitecaps coming into the league in 2011. We’d love to hear them! 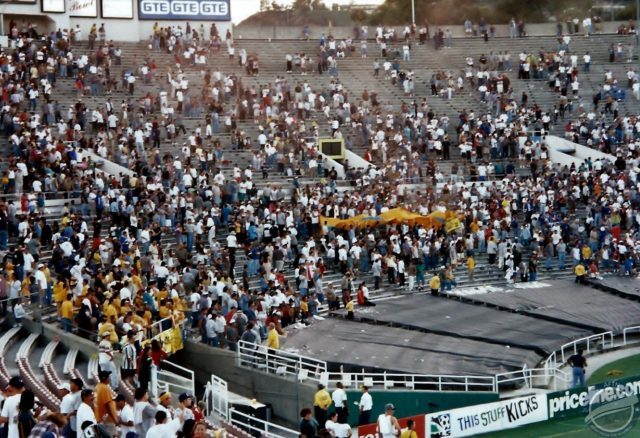