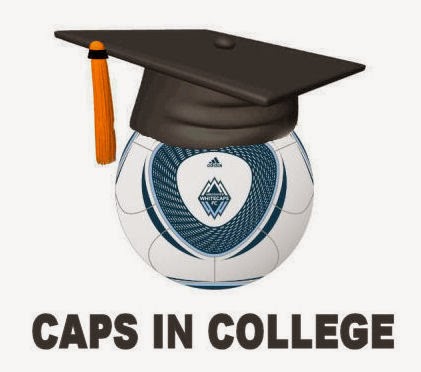 [With the Canadian Soccer News site currently being down for a bit of a revamp and rejigging, we’re temporarily moving AFTN back to Blogger for a few days. All the stuff posted here will get uploaded onto the blog at CSN once we’re back up and running. But for now….]

The weeks are counting down before the frantic few weeks of postseason action get underway on both sides of the border.

In CIS action, number one ranked UBC have all but secured hosting the Canada West Championship with a pair of home wins and another two clean sheets. UVic have secured their spot in that six team tournament but could only manage one point from their two games this past weekend.

SFU kept atop of the Great Northwestern Athletics Conference (GNAC) in NCAA II with a comfortable 2-0 win over WWU, moving up to third in the overall rankings as a result.

It was a quiet week for Caps alumni in NCAA I with no goals to report, but Callum Irving recorded a clean sheet and Ben McKendry’s New Mexico Lobos are starting to move up the rankings again.

The number one ranked UBC Thunderbirds took another two big steps towards hosting the six-team Canada West Championship tournament at the end of this month with a pair of comfortable home wins over the weekend.

A goal in each half was enough to see off Winnipeg on Friday night, with Navid Mashinchi and Milad Mehrabi doing the damage.

UBC dominated the game but were made to wait until the 43rd minute before finding the breakthrough when Mashinchi scored after a scramble in the box, with Mehrabi getting the assist. The tables were turned in the 74th minute when Mashinchi turned provider and Mehrabi buried his effort from just inside the box for a league leading ninth of the season.

The Tbirds extended their winning streak to ten and kept their third straight clean sheet the following evening against Mount Royal. It was UBC’s final home game of the regular season and they marked it with a comfortable 3-0 win over the Calgary side.

It only took UBC 49 seconds to open the scoring when a Cougars defender deflected a Harry Lakhan shot into his own net. The Thunderbirds had to wait until 14 minutes from time to add to their tally and Lakhan was again the provider in a neat passing move that saw Reynold Stewart score with a low shot for his seventh of the season. Mashinchi had a two yard tap in from a Niall Cousens cross in the 87th minute to round off the scoring.

All of the goals and assists in this game came from UBC players who have been with the Whitecaps Residency and PDL sides.

The Thunderbirds now have a bye week before heading off for their final two away games of the season next weekend. It will be a chance for Mike Mosher to rest some of the key players and give some of the younger guys a run out, but the coach cautioned ”first and foremost we want to make sure we’re healthy and got all our pieces available but at the same time don’t want our standard to drop in terms of our play”.

It was a tough weekend for 10th ranked UVic Vikes who could only manage one point from their two away games but have secured a spot in the postseason super six.

Saturday saw a fighting 2-2 draw at Saskatchewan Huskies. Whitecaps trialist Brett Levis opened the scoring for Saskatchewan in the 29th minute before Caps PDL player Cam Hundal tied things up just before the half with his fifth goal of the season. The Vikes took the lead midway through the second half from their leading scorer Cam Stokes but the Huskies grabbed a late point.

UVic travelled to Alberta on Sunday but went down to two second half goals from the Golden Bears.

The Vikes head back to Victoria this weekend for their final home games of the season. Lethbridge come a calling on Friday, with Calgary visiting the next night. Both games kick off at 7.15 at Centennial Stadium.

A goal in each half kept SFU Clan on top of the GNAC and increased their lead over Seattle Pacific and Western Washington Vikings.

It was a comfortable 2-0 win over the Vikings, with SFU dominating much of the match but not able to turn their pressure into more goals.

Alexander Kleefeldt opened the scoring in the 12th minute, rising well to head home a cross from Whitecaps Residency graduate Alex Rowley. The Clan increased their lead just before the hour mark when Jules Chopin pounced on a giveaway and hit a neat finish for 2-0. You can see video of the goal and some other highlights from the match below.

[youtube http://www.youtube.com/watch?v=SszgJL7ZAyE?list=UUBCU788PnJenQL-0V6AVjHw]Kleefeldt’s goal and overall performance earned the German GNAC Defensive Player of the Week honours, whilst the win moved SFU back up to number three in the NCAA rankings having fallen as low as ninth following the loss to Seattle Pacific the week before.

SFU head off for two away games this week in the Dakotas, taking on second bottom University of Mary Marauders on Thursday and bottom placed South Dakota School of Mines two days later.

CAPS IN COLLEGE – NCAA I

Ben McKendry’s New Mexico Lobos have moved up to 14th in the latest NCAA rankings after a 2-1 overtime win over Florida International in Albuquerque on Saturday night. McKendry played the whole 99 minutes and was credited with an assist on the winner after his cross to the back post was headed across goal and put away by James Rogers from close range.

Brody Huitema had three shots in 102 minutes of play as his 67th ranked Duke Blue Devils were held to a 1-1 draw after double overtime against North Carolina State.

On the goalkeeping front, Callum Irving’s University of Kentucky Wildcats had a win and a draw from their two home games. Double overtime couldn’t separate them from South Carolina on Sunday, with Irving playing 110 minutes and recording the clean sheet in a 0-0 draw. They were back in action on Wednesday and came back to beat Valparaiso 2-1, although Irving did not play in this one. Kentucky are currently ranked 117th but expect that to rise.

Sean Melvin’s University of North Carolina Wilmington Seahawks had a win and a draw in their two matches. Melvin didn’t play in either Saturday’s 1-0 win over James Madison or the 2-0 defeat to Drexel on Wednesday. UNC have a current ranking of 127th.

Declan Rodriguez’s University of Milwaukee Panthers had a mixed two match week, with a win and a loss. Valparaiso (who I’d never heard of before writing this piece and now I’ve mentioned them twice!) were sent packing, well back to their dorms as they were at home, 1-0 on Saturday, with Rodriguez registering one shot in his 90 minutes. The Panthers travelled to Chicago on Wednesday night but suffered a 1-0 loss at the hands of UIC Flames, with Rodriguez again registering one shot in his 90 minutes. Milwaukee are currently 36th in the national rankings.

Quinton Duncan played 67 minutes as his University of Tulsa Hurricanes saw off Charlotte 3-2 in overtime. The win sees Tulsa ranked 44th in the nation.

Wesley Cain’s Wright State Raiders were left in a right state after suffering a 2-1 overtime loss at home to Oakland on Saturday, with Cain managing one shot. Wright State are currently 157th in the rankings out of the 203 teams.