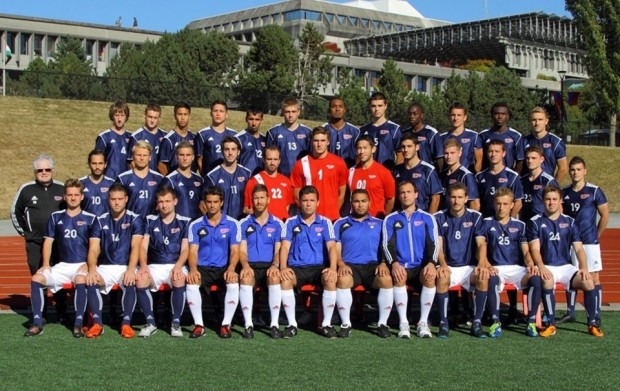 Simon Fraser University head to Georgia on Monday knowing that they are two games away from making history.

Three hard fought wins in the post-season so far have taken SFU Clan to the ‘Final Four’ of the NCAA Division 2 tournament where they will face Saginaw Valley State University from Michigan on Thursday.

The Clan now sit two wins away from becoming the first Canadian university to win a NCAA National Championship.

It would be a massive achievement for college football in this country, and if they achieve it, then they’ll have done it the hard way after being forced to play every playoff game on American soil, including the ones they were eligible to host, in a tiring eleven day road trip.

In the lead up to the semi final, we’re having ‘Clan Week’ here on AFTN.

We’ll have a two part interview with Head Coach Alan Koch on a number of topics including why SFU went down the NCAA route, the challenges of being a Canadian school in an American system, the season so far, future plans and a lot more besides. It’s very open, honest and frank.

We’ll also have a detailed preview and report on Thursday’s semi final against Saginaw Valley Cardinals, and then hopefully a build up to Saturday’s final.

We kick things off today with a season review to date. The many highs, the few lows, the star performers and the awards won.

SFU were accepted into the NCAA in 2009 and although they competed in the Great Northwest Athletic Conference for the first time a year later, their two year probationary period meant no post-season play.

This year though all that changed and SFU grabbed their opportunity with both hands.

The Clan are heading in to the ‘Final Four’ with an impressive 19-1-1 season record.

They’re the only top seeded team to have made it through to this stage and have the best record from the four teams remaining.

Whatever happens, it’s been a season to remember and one which has exceeded expectations.

The Clan went into the 2012 season knowing that they had a very talented squad, but still a relatively young team with a lot to learn. They expected to make the playoffs, but just how far they would go was a mixture of realism and dreams.

The scene was set early with a 6-0 demolition of Thompson Rivers University in the opening game.

That was one of four games that saw the Clan put six past their opponents, with another three games seeing them finding the net five times, and one game going even better with seven.

They were the highest scoring side in the GNAC with 67 goals in their 18 regular season games, averaging a staggering 3.72 goals per game. They’ve since added five goals in their three postseason games to date.

With those stats, it was little surprise that they won the GNAC with ease – by 26 points to be exact – and they earned a number one seeding for their part of the postseason bracket.

Coquitlam lad Carlo Basso led the goalscoring charts with 13 goals, with important contributions from two more BC boys, Justin Wallace (10 goals) and Ryan Dhillon (7 goals). These players made up three of the top four places in the GNAC standings.

Basso was also joint second when it came to assists, along with Wallace, with seven.

Pride of place as assist leader though went to Whitecaps Residency product Alex Rowley with eight, to go along with his three goals. Rowley has had an excellent Freshman year, further enhancing his reputation as one to watch in the future.

It was little surprise then that the Clan dominated the end of season awards.

Ten players were named to the Great Northwest Athletic Conference All-Conference team, with midfielder Michael Winter being named GNAC ‘Player of the Year’ and striker Dhillon named ‘Freshman of the Year’.

Basso, Dhillon, Winter and Matt Besuschko all made the All-Region first team, whilst Jamaican U17 star Quante Abbot Hill Smith and Norwegian defender Heldge Neumann were named to the All-Region second team.

The Clan’s 25 man squad certainly has an international feel with players from nine different countries, including Canada, but most importantly for the development of the game here, 14 of the squad are BC locals.

How many of these guys are on the Whitecaps radar is difficult to say and the NCAA eligibility rules complicate matters a little bit.

Freshmen Alex Rowley and Jason van Blerk have just come out of the Whitecaps Residency program, but both should be back with the Caps in the summer for the PDL season.

As for the others, well their success has led to the obvious attention from MLS scouts, with around six different clubs keeping regular tabs on some of the players, along with some interest from overseas.

You don’t want to see the Caps left behind and missing out, especially with local talent, but the rules mean it’s not as simple as geography now.

With so many of the Clan squad still being in their first two years of the program, SFU could have some domination for the foreseeable future, in what is proving to be a very successful time for BC schools.

Does SFU being in NCAA help or hinder the growth of young Canadian talent and the college system here?

We’ll discuss this and a lot more, with Head Coach Alan Koch over the next two days. You won’t want to miss it.