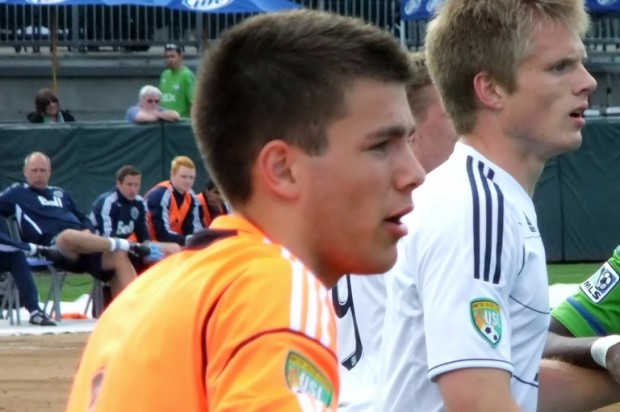 We continue AFTN’s third annual Residency Week by catching up with an alumni, goalkeeper Callum Irving.

A local Vancouver lad, Callum was with the Whitecaps Residency program from 2007 to 2012 and played through the ranks for the Caps right up to PDL level and we voted him into the number three spot in our 2012 Whitecaps Residency ‘Ones To Watch’ series.

He’s just finished his second NCAA season with Kentucky Wildcats, where he established himself as the starting keeper in his sophomore year and is majoring in history.

With the Whitecaps U18s and U16s down in Indiana this week competing hard in the USSDA playoffs, it brings back many happy memories for Callum, who was the starting keeper in the Caps’ run to the 2012 USSDA Championship game.

“I have really fond memories of not only the playoffs, but just the team and the guys that I played with,” Callum told AFTN when we caught up with him at Whitecaps training on Monday.

“This is a special time of year where you get to compete for some real silverware, because a lot of the time it’s just regular season, you’re playing exhibition games, friendlies and stuff. But when you actually get a chance to play against some of the best teams in North America it’s a lot of fun.”

The core of that Caps U18 side that made the 2012 Championship game went their separate ways soon after. As we’ve said before on here, it felt like the end of an era with some players making the step up to the MLS team, some heading over to Europe and others going down the college route.

The latter was the path chosen by Irving and he headed south to Kentucky Wildcats of the NCAA’s Conference USA.

Callum earned the starting goalkeeping job in his rookie preseason but was soon sharing goalkeeping duties with Junior stopper Jack Van Arsdale. Irving made three starts and kept one clean sheet before Van Arsdale put in a fantastic display against highly ranked Kentucky and kept Callum out of the team for the rest of the season.

It’s hard on a young player to up roots and go down all that way and not play, so did Callum ever question whether making the choice to go into NCAA with Kentucky was the right one?

“I mean initially, it’s tough. You go down there expecting one thing and a whole completely different other thing happens but it’s not due to any other reason than it just wasn’t good enough for myself and you kind of look at yourself and go, how can I bounce back from this?

“Am I going to take it positively or negatively and I think that now looking back on it, there’s no other better decision I could have made than to get into a scenario where things aren’t just handed to me where I wasn’t just assumed to be a starter, I had to work for it and this past season I really earned my place and I think I grew a lot from that, learning from my failures, so I think, as much as I would have loved to have played, I almost learned more not playing.”

And he took that learning and bounced back to claim the starter’s position from Van Arsdale in his sophomore season, making 16 appearances and keeping six clean sheets on the way to a .719 save percentage.

Unfortunately Kentucky didn’t make the NCAA playoffs, crashing out with a 1-0 loss to Charlotte at the Conference semi final stage. So how would Callum sum up last season for both himself and the Wildcats?

“For me, personally, it was a good year. Overall, judging by personal performance it was good but when I look at the whole year as a team, we just couldn’t click. We had certain things that would go well and then one thing would break down. We didn’t quite click and that cost us in a few big games.

“So overall looking back it’s a bit disappointing but we have a lot of returns coming in the fall, a good recruiting class, so I’m positive looking forward and I hope that I can continue my play from last year and even step up another level and hopefully get the team a deep push in the tournament.”

Callum is back in Vancouver for the summer and training with both the Whitecaps’ MLS and PDL teams until August 8th, as he keeps his NCAA eligibility and Caps’ MLS rights in tact.

What has the contact with the Whitecaps been like when he’s been down in Kentucky and has Carl Robinson told him that he’s still in his and the club’s plans?

“I talk to mostly Marius [Rovde – the goalkeeping coach]. Goalkeepers, you know, we’re kind of a different breed. We have dialogue going on, just talking about what’s going to happen when I come back in summer.

“I talk a lot with Raegyn [Hall], the Residency coach, because the obviously the first team’s extremely busy and they have a lot of things on their plate, with keepers and stuff like that. There’s usually too many keepers, there’s too much so that you can’t really do training.

“I’m in contact with Raegyn a lot and I get a lot of work with him and the PDL and the U23s. I’m hoping that I’m still being looked at, but it’s mostly just put in my work and see what happens. I can’t really control the future right now, so it’s just coming back, getting some training, see what I think, see what they think and moving on.”

Callum has been back to train with the Caps several times now in the past two years.

We often hear about the lack of training at the college level and the limited work they are allowed to do with coaches over the course of the year. A lot of draft picks we’ve spoken to of late also find it a big step up from training with a college team and an MLS one like the Whitecaps.

Does Callum notice a big difference when he heads back to Vancouver and what aspects in particular, and just what is it like training at a NCAA team?

“As far as overall quality, it’s a lot sharper [with the Whitecaps]. Naturally, this is what they do as a living, at college there are some other distractions. If you have a big squad at college as well, not everyone is going to be there every training session to put their 100% in, which means some of the older guys and leaders have to really bring the group up. Where in this, everyone is just fully in to it every session and the quality is just so high, so high, so high and you’re really focused.

“But as far as the training, you are limited for a few months at the beginning of spring, but that allows you to do a lot of your own sessions with the team, a lot of individual work and it also allows you a bit of an offseason because if you’re going 24/7, 365 that doesn’t allow you a lot of time to relax or maybe get into the gym and maybe put some work in there, get your fitness levels up, different things like that. Recovery from injuries from the season.

“The college season is pretty quick. It’s pretty physical. Those couple of months off are slightly necessary and then you kinda build it up and you get a couple of good games in spring. So overall I think it might seem that there isn’t a lot of training, but it is what you make it and if you want to train a lot you can.”

Much is made of players, especially young Canadian talent, going down the college route, especially in NCAA.

Detractors always argue that the skill development and quality game time is simply not there, but we always argue that so few players will actually carve out a living in the game that it’s great for them to get an education behind them for their other aspects of their working life if thing don’t pan out the way they hope.

Whenever you speak to any of the Whitecaps Residency alumni that have gone to college, they’re really enjoying it and glad they made the decision. Callum is no different, so what advice would he give any of the current Caps’ Residency guys that are weighing up whether to go to college or not?

“I would recommend it. Personally I’ve had a great time. It’s one thing for college, especially with me living in Vancouver my whole life, playing for the Whitecaps, I hadn’t got a lot of exposure about living away from home, meeting new people and having to push myself out of my comfort zone.

“I think going there, you can learn a lot more than being on the field. You can mature a lot as a person. For me, as a goalkeeper, physically I’ve matured a lot since going away.

“I highly recommend to guys that maybe the professional, they’re not quite knocking on the door yet, but you can go there for a few years and come back, and it can be highly beneficial.

“Again, I feel like the college route, it is what you make it because there are so many opportunities to get better, it’s just whether or not you want to.”

Good luck to Callum when he returns to Kentucky in the fall. We’ll be following Callum’s, and all of the Residency alumni’s, fortunes over the course of the season in our regular Caps In College feature once again.

And of course, we still hope to see him in a Whitecaps jersey again one day.