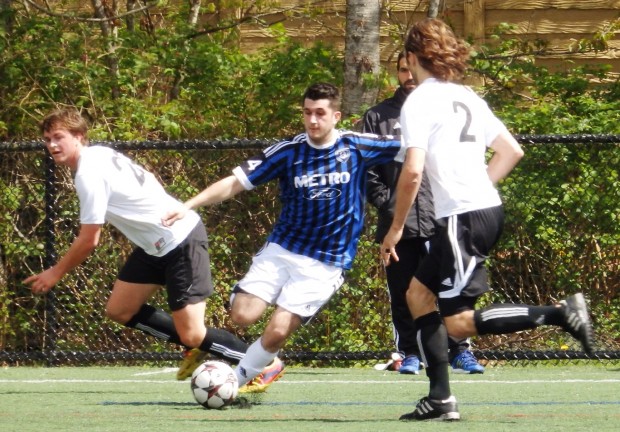 The semi-final line ups are now complete in the 2014 BC Provincial Cups and in the battle for the ‘A’ Cup, it’s going to be an All-Vancouver Metro Soccer League (VMSL) final four.

The VISL side showed little in attack for most of the match, with the home side pressing hard from the early going but not finding that telling final ball to do the damage and creating few clear cut chances.

Domenico Delli Santi (pictured above) was looking particularly lively and he had the first chance of the game when he shot wide for Coquitlam just three minutes in.

The same player got in a good position just past the half hour mark when he ran onto a cross into the box unmarked but pulled his shot wide left when he should have at least hit the target.

The opening goal finally came with five minutes of the first half remaining and it was no surprise that it was Delli Santi who was on hand to grab it.

Confusion in the Bays’ defence from a bouncing cross in from the right saw defender Rhyse Harnden collide with keeper David Magnotta on the deck and the ball spilled across goal to Delli Santi, who poked it home on the goalline.

Coquitlam continued their pressure at the start of the second half and they doubled their lead eight minutes in when Delli Santi finished low into the bottom corner.

Lucas Reis and Jovan Blagojevic had chances to extend the home side’s lead but couldn’t finish the visitors off.

Bays United had a rare chance on goal with 11 minutes remaining but Doug Joyce shot wide.

Both sides had a couple of half chances to finish the match but in the end it was the VMSL side who comfortably moved into the semi finals where they will take on back to back Provincial A Cup winners Surrey United Firefighters.

You can see video of Metro-Ford’s opening goal below:

First up was a battle between the top two sides in this season’s BMSA Division 1, with Bacardi FC hosting champions South Burnaby Fighting Irish. The Irish came through 2-1 winners and now travel to face Richmond Athletics in the semi finals next weekend.

We continued our ‘Road To Burnaby Lake’ jaunt by taking in the clash between BMSA side Europa FC and VMSL team Metropolitan FC on Sunday evening at Burnaby Central Secondary.

If you missed it, we got to this game after watching Bombastic FC beat Rino’s Fury in the ‘B’ Cup Preliminary round, then seeing Europa FC beat Bombastic in the first round proper.

Keeping with this year’s theme it would seem, Metropolitan clinched their semi final berth with a very comfortable 2-0 win. In fact it was two, going on four or five.

Unfortunately roadwork closures and then getting lost meant we missed the start of the game and Metropolitan going in to a 1-0 lead.

The visitors were making most of the running in the half but Europa did have some chances to level, with the best falling to Mike Mann just past the half hour mark when he ran through on goal but pulled his shot wide left. 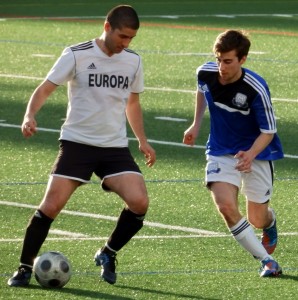 Metropolitan finished the half in the ascendancy and had a couple of chances, with first Hoffer hitting a low 25 yard drive just left and then Mayer rising freely to head a free kick just past the same post.

The VMSL side should have added to their lead four minutes after the restart when Mayer was played in one on one with the keeper but had a horrible miss and pulled his shot to the right when he should have buried it.

Metropolitan did double their advantage three minutes later though when a cross to the back post was met by Brennan, and with the keeper committed he rose unchallenged to head home.

The goal seemed to suck the belief out of Europa and although Jason Pierotti had a shot deflected wide just minutes later, they were reduced to wild shots from distance that didn’t trouble the visiting keeper.

They were also leaving gaps in the back and Metropolitan were finding a lot of space with Hoffer having a couple of chances on the hour mark that he couldn’t convert.

There was a heart in the mouth moment for Europa keeper Eric Shepherd in the 69th minute when he let a backpass slip under his foot but the ball trickled inches past the left hand post to keep the game a two goal affair.

Europa had their best spell of pressure in the closing moments of the game, with Valko Furnadjiev and Alessandro Messina having chances late on but there was no way back for the Burnaby side and they went down to a 2-0 defeat.

Metropolitan won the VMSL Division 2C title this season, going undefeated in the process and only conceding 12 goals in their 18 games. They have also not conceded a goal yet on this Cup run and will now face free scoring RASA winners, and defending ‘B’ Cup Champions, Richmond All Blacks in the semi finals, in what should be a cracking game.

As always, you can find the full schedule for all the upcoming Provincial Cup matches on the BC Soccer website.

And for all the banter about the games, head over to the Take The Piss forums.