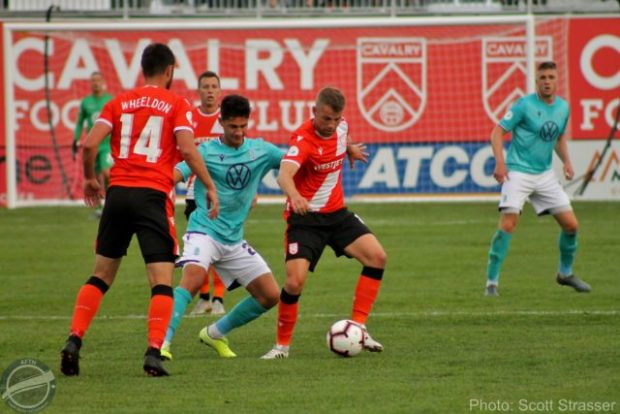 It was an uncharacteristically poor August for Cavalry FC, as the Canadian Premier League’s spring season champions won just one of their seven fixtures throughout the month.

After losing 2-1 in the first leg of their Canadian Championship clash against Montreal Impact on Aug. 7, Cavalry drew 0-0 with HFX Wanderers three days later. The Calgarians followed that up with the second defeat to the Impact Aug. 14, before enduring another scoreless draw two days later against FC Edmonton.

“It just wasn’t good enough,” he said during the post-game conference. “I think we’ve lost that bite and I have to find out [why].

“I’m expecting them to be out there chomping at the bit. We expect our boys to be hungry, but we looked like a toothless tiger and that’s not us. That’s not what won us the spring championship, and that’s not what got us on the deep run [in the cup]. I have to rattle some cages and find that back, because that wasn’t good enough.” 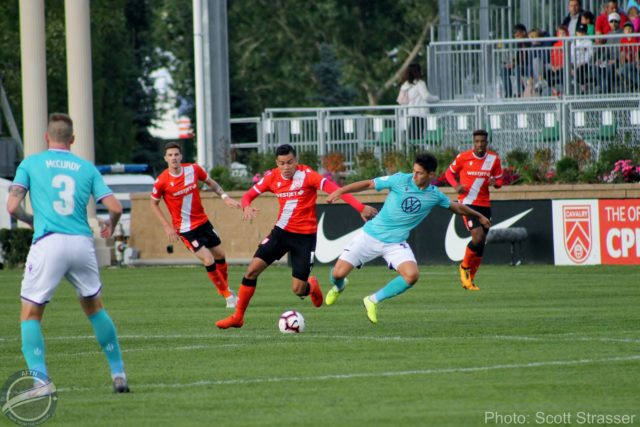 Disappointing for Cavalry after such a strong start to the year, but here are five reasons why the team didn’t enjoy the same success in August as they did in the first four months of the season.

(1) Other teams catching up

No one in the CPL could match Cavalry’s quality in the spring. The Calgary-based side boasted an 8-2-0 record in league play, winning their first seven games and coasting to the spring championship with a game to spare. The team developed a budding rivalry with second-place Forge FC, but the gap in ability between those teams and the rest of the league was notable.

There were many reasons for Cavalry being better than the other six teams in the league’s early months. Most notably, the Cavs enjoyed a pre-established chemistry, due to so many of the squad’s roster playing for Foothills FC in the PDL in 2018. It was a chemistry that other teams lacked at the time.

But now, the rest of the CPL’s squads are starting to find their footing. As managers tinkered with their tactics and starting 11s, it was always inevitable that they’d find what worked and what didn’t.

Fifth-place Pacific FC appears to finally be over their injury issues from the start of the season, and the Vancouver Islanders have lost just once in their last six games.

Third-place FC Edmonton, as well, is in the midst of a purple patch. The Eddies have lost just twice in their nine fall season matches, and that run was preceded by a four-game unbeaten streak at the end of the spring campaign.

And Forge, of course, is still Forge. The Hamiltonians have picked up where they left off in the spring season, and currently occupy the top of the fall season table with a 5-1-1 record. They were unbeaten in nine games across all competitions before the CONCACAF League loss to Olimpia on Thursday night.

It’s not that Cavalry was playing terribly throughout August – they only lost once in their five games against CPL opposition and still put in a few impressive performances, including the 3-1 defeat of York9 on Aug. 21 and the two battles against Montreal Impact in the cup. 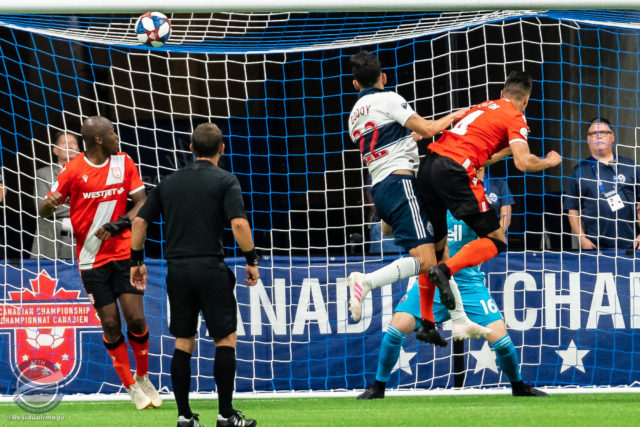 Speaking of the games against the Impact, that topic segues nicely into the second reason for Cavalry’s poor results in August:

It’s a natural phenomenon in the professional footballing world that teams can experience a “cup hangover” when they are knocked out of a knockout tournament. Cavalry has been no different.

The Cavs put a lot of stock into their historic Canadian Championship run, particularly after upsetting Vancouver Whitecaps in the third round. Wheeldon Jr. fielded his strongest 11 in each of the two games against Montreal, which were both sandwiched between CPL fixtures.

Those cup games came with a lot of added adrenaline and media attention in Calgary, so after getting knocked out, it was understandable for Cavalry to undergo a “cup hangover” when they resumed league play.

An unfortunate consequence of the cup run – as great as that run was – was the effect it had on the collective health of Cavalry’s roster, which brings us to point three:

Cavalry had a relatively unscathed roster during the spring season, when compared to, say, Pacific FC. While some players picked up injuries – José Escalante, Oliver Minatel, and Mason Trafford come immediately to mind – the layoffs were typically minor in duration, and there was always someone to fill in their place.

That hasn’t been the case in the fall season, and it is clear Cavalry has recently been bitten by the injury bug. A recent ACL injury meant right-back Dean Northover joined Chris Serban on the out-for-the-season list, while defender/defensive midfielder Joel Waterman missed six weeks with a fractured toe. Striker Jordan Brown also had to sit multiple games with a foot injury, while attacking midfielder Sergio Camargo has missed a few games with a hamstring pull.

In terms of other players not being able to play, center back Jonathon Wheeldon, midfielder Elijah Adekugbe, and captain Nik Ledgerwood all picked up suspensions in August, either through a red card or an accumulation of yellow cards, which added to the number of players Wheeldon Jr. couldn’t call upon in certain games.

Granted, Cavalry has bolstered its roster this month with the addition of two attacking signings – 16-year-old Aribim Pepple and 24-year-old Tofa Fakunle, both of whom made the move up to the squad from the Foothills FC team in recent weeks. But at the moment, Cavalry is still lacking some depth defensively – particularly at full back, due to the long-term injuries of Serban and Northover. 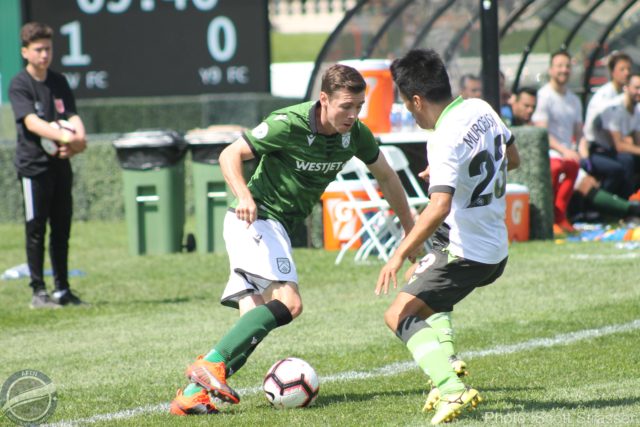 The growing number of injuries has been a particular issue when looking at how often Cavalry is playing, which leads us to point four:

August saw Cavalry play seven games – five CPL matches and two in the cup – in a span of 21 days. If you add the last game of July, they have played eight games in the last 26 days.

Essentially, every week for Cavalry this month has been what they refer to in Germany as an “Englische Woche” – when teams play a mid-week game sandwiched between two weekend fixtures.

The aforementioned injuries and suspensions to players put Wheeldon Jr. in a tough spot; he had to tinker with every starting 11 to ensure the players who were still healthy weren’t getting too burned out. I don’t think there was a single game in August that the same starting line-up was fielded two games in a row.

The toughest time period would have been, of course, the week of the second leg against Montreal. Less than 48 hours after losing 1-0 to the Impact on Aug. 14, Cavalry had to line up for a league match against FC Edmonton. With five players out injured and Jonathan Wheeldon suspended, it was telling that Wheeldon Jr. made seven changes from the starting line-up that took to the pitch for the Impact game.

September will be much kinder to Cavalry. Now that the Canadian Championship run is over, the team will only play four games throughout the month – Sept. 2, Sept. 11, Sept. 22, and Sept. 28. While three of those are on the road, those 11- and nine-day breaks between games will seem pretty sweet to a squad that has been exhausted and spread thin as of late. 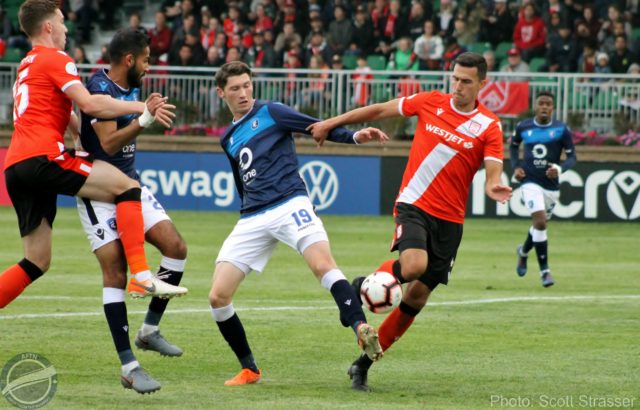 The lopsided format of the CPL this season means the winner of the spring season (Cavalry) plays the winner of the fall season in a home-and-away series for the league championship. The curious format means Cavalry doesn’t really need to play as well as they did in the spring – they have already punched their ticket to the big dance.

Of course, Wheeldon Jr. and every player will tell you they fully intend to play every game with the same high level of intensity. But as Calgary-based soccer journalist Stuart Gradon pointed out in a recent piece on totalsoccerproject.com, it’s natural to expect the Cavs to “shift down a gear” as they progress through the fall season.

It’s not unrealistic to expect even a few members of Cavalry to go through the odd moment of complacency this spring season, with the knowledge that no matter what happens, they’re already in the final.