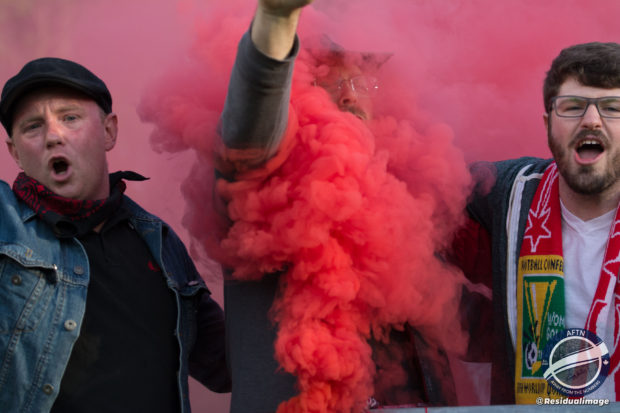 I see the Rovers are a-rising!
I see victory on the way!
I see Canadians are playing!
I see a World Cup one day!

— one of The Swanguardians’ more optimistic chants.

Last Friday a new local supporters group began life with two guys sitting in the back of a pickup truck with a broken tailgate in Burnaby supporting a team that had begun their life on -3 points. The Swanguardians arose – like many things these days – first as a Twitter handle a few weeks back, and then as an invitation to gather anybody interested in actively supporting TSS Rovers in their inaugural season in the Premier Development League (PDL).

I joined right away because I have this strange addiction to watching football and singing, and despite the brave exploits of Kris Aug, the lone ‘Caps supporter in Colorado last week, I rather prefer partaking of my addiction in the company of others. Supporters groups are sometimes also support groups. Perhaps mostly support groups.

It was hard to know from the tweets how organized The Swanguardians actually were. So when I showed up at Swangard last Friday night it was with some hopeful expectation that a tailgate party might be in full flow, complete with barbeque and beer and singing. My son and I were the third and fourth people on the scene and we had nothing. Our own beer was yet to arrive and the barbeque hadn’t materialized. We were dressed in whatever red clothes and scarves we had. Like everything to do with Rovers, it was obvious that this was going to be starting from scratch, from the ground up, everyone pulling their weight to make it happen.

To that end, shortly after we arrived a crew of away supporters – the Red Aces of Lane United – arrived from Eugene, Oregon, bringing two flats of their sponsor’s beer to share. Jay Demerit showed up with his Portmanteau deluxe beer pong table, and my son crossed off a previously unlisted bucket list item by beating our former VWFC captain in a game of beer pong with his old man providing some key shots.

Meanwhile on the other side of the fence, Rovers coach Will Cromack was warming up his players by first having them carry a bleacher to the traditional spot behind Swangard’s iconic south goal, where the Southsiders were born in 1999. I’m not sure I’ve ever seen a team start their home opener by actually building the supporters section for their fans, but that’s right in keeping with the ethos of this whole enterprise. Mutuality.

I am far from an original Southsider, but I did support the Whitecaps from that place for a few games back in 2010, and it felt good to be back there on Friday. There were a lot of original Southsiders there too, making it something of a reunion. Some are still fixtures in the Southside or elsewhere in BC Place, while others have given up on the Whitecaps and MLS over the years and so coming back together to support a local team was perhaps a little bit evocative of those times. 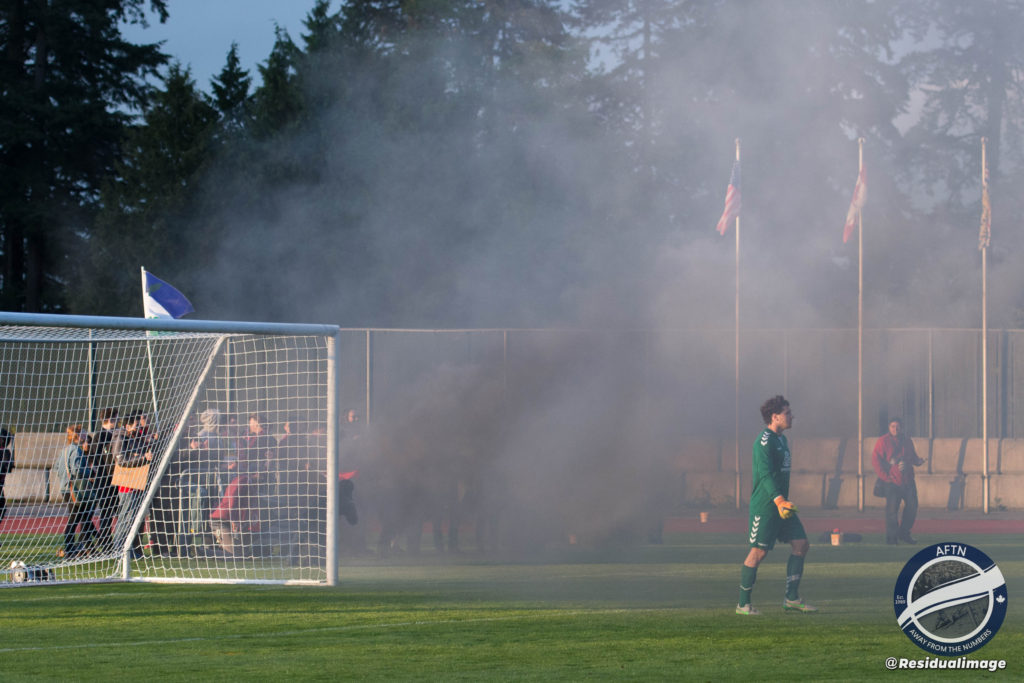 Of course this is a different team and a different league, but the very passion and commitment to local football and Canadian aspirations that Will and Colin and Griller have put into their enterprise awoke the longing that many had to come and support with that old familiar intimacy. We stood mere feet from the goal, close enough to taunt the Lane United keeper incessantly and to witness our first home goal, celebrated with song and flags and smoke. After half time we moved our barricade to the north end to be in the sun and jeer Lane United for the penalty that sent Rovers ahead.

The rush of endorphins that comes with extending your passion and support from the stands onto the pitch, trying to make a meaningful connection with the players, seems not to diminish in me regardless if I’m cheering for Canada, the ‘Caps, WFC2 or TSS Rovers. It’s almost as if you are extending yourself onto the pitch, trying to insert yourself into the game. When the Rovers dropped the lead in the 74th minute, we tried to lift our boys, tired as they were, but in the end we settled for a draw but never let up the singing. By the end of the match we were a solid twenty or so and there were smiles all round, from old-timers and new supporters alike. We cheered our boys off the pitch, and they in turn extended a round of applause back to us.

It’s such a rare privilege to be in on the ground floor of something like this. A brave enterprise to develop Canadian soccer in the dark gaps below the professional level, in a league that can make a difference for both the players and the national programme. Canada is not in any position to disparage multiple attempts to develop the men’s game, and with MLS, USL, NASL, PDL, and soon Canadian Premier League teams joining the fray, we have quickly increased the number of Canadians in homegrown elite development from a few dozen to hundreds by 2019. Anyone who is sinking capital and passion into this effort is worthy of support if you are at all invested in the future of the men’s game. That’s reason enough for coming out on a Friday night. The Swanguardians are giving us other reasons to be there too: camaraderie, friendship and common cause.

Just wait until we get our barbeque.