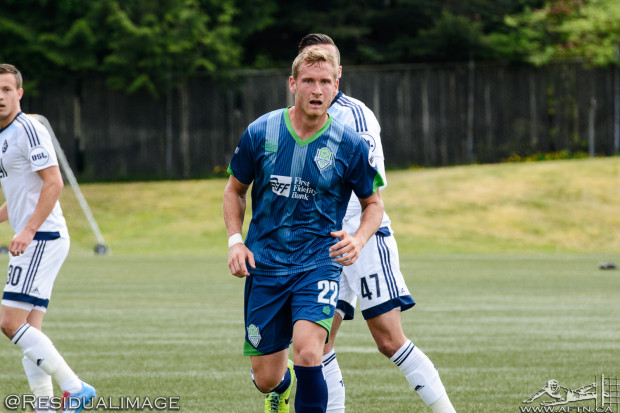 Vancouver Whitecaps 2’s prime areas of concern last season were clear for all to see – they didn’t score enough goals and had a “porous” defence as head coach Alan Koch
described it to us.

No surprises there and similar to the majority of clubs that fail to make the playoffs.

Koch and his team have worked hard this offseason to plug those gaps and the 2016 WFC2 squad is looking a lot stronger than it’s debutant predecessor.

The defence certainly looks far more shored up with first round draft pick Cole Seiler already looking impressive in the ‘Caps preseason games and earning himself a MLS deal in the process. Two European centre backs were also added to the WFC2 squad this week, Englishman Elliot Green and Dutchman Sem De Wit.

At the other end of the pitch, Koch had an active input into the selection of draft picks Chris Hellman and Thomas Sanner, with Canadian international striker Daniel Haber returning home after spells in Israel and Cyprus.

Amidst all that went a signing that went a little bit under the radar, but experienced striker Kyle Greig could be one of the key pieces to the Whitecaps becoming a playoff team in their second USL season.

Greig has spent the past two seasons in the USL with Oklahoma City Energy, having come to the league out of college in 2013 with Wilmington Hammerheads before joining OKC for their inaugural season. With 22 goals and four assists to his name from 76 overall USL appearances, he knows his way to the back of the net, even adding one against the ‘Caps at Thunderbird Stadium last year.

Greig will bring some much needed experience to the young Whitecaps ranks, but after two happy seasons in Oklahoma, how did the move to Vancouver come about?

“I’ve been in the league, the USL, for three years now,” Greig told AFTN when we caught up with him at WFC2 training. “This will be my fourth season and I’m really just trying to find the right place to put myself out there and get the opportunity to make the jump to MLS. I spoke with Alan [Koch] and this seemed like a good fit for me. It was a good move for me.”

The Energy had an affiliation with Sporting Kansas City these past two seasons, allowing Greig the chance to train with the KC first team at times. As the Whitecaps know from their previous affiliation with Charleston Battery, things don’t always run smoothly with such a set up.

Having your own USL side is clearly the ideal way forward for MLS teams. You manage it, you play the same footballing philosophy from first team to academy, and you set a clear development pathway from that academy through USL and into the first team. And that last point was a key decision maker for Greig to up sticks and head north to Vancouver, keen to earn a MLS contract.

“I think that is a big reason why I came here,” Greig admits. “With Oklahoma City kind of being its own identity and having a partnership, which wasn’t the strongest partnership, with Sporting Kansas City, now they’re with FC Dallas, just to be in a place like this where there is an obvious partnership where guys are going in and out constantly, is something that was really attractive to me.” 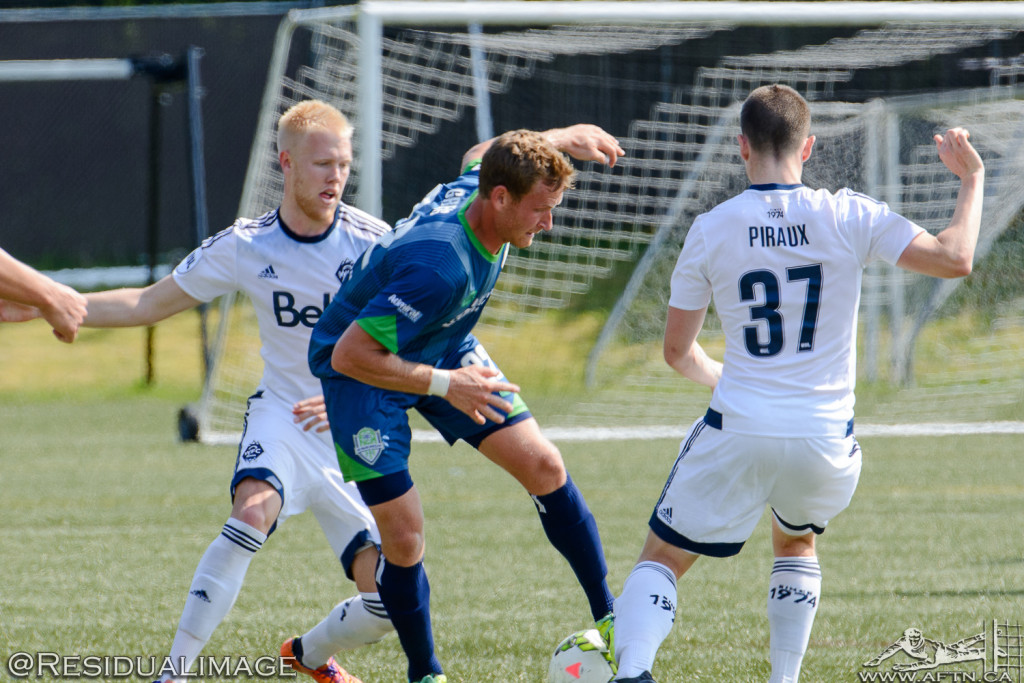 Greig’s football journey is not your typical one of a player coming through the college ranks, standing out and making it to the pros. In fact, it was a journey that almost didn’t even begin.

Coming out of high school, Greig went to Benedictine College in Atchison, Kansas. Soccer wasn’t in the plans, just an education, but once on campus, he was persuaded to have trials with the Ravens.

“I went to a smaller NAIA school,” Greig explained. “I’m from Kansas City and the school was probably only an hour away. I wasn’t going to play college soccer. I was just going to go to Kansas University, live with my brother and do that, and then I just thought, why not give college soccer a try.

“So I maybe started a little bit late at really playing at a higher level. So I went to a small school and it’s hard to get noticed. After, I just fell in love with the game all over again.”

It may have been a small school but when you hit 43 goals over four years, it gets people’s attention, no matter what the level. But even with that, it was only going into his senior year that Greig realised he had what it took to become a pro.

A summer training stint with Sporting KC helped, and his 14 goals and five assists in his final year at college started to garner him some attention, although initial tryouts came to nothing.

Graduating in December 2012, Greig gave himself till the summer to get a pro contract or give up on his dream. He’d tried his hand at some coaching with Benedictine, before going for a two day open tryout with Wilmington, who he’d heard were looking for a big striker like himself.

Greig signed his first pro deal with the Hammerheads, scoring six goals in the 2013 season and winning the club’s ‘Rookie of the Year’ honours. The rest is history.

“My story’s been almost working my way up,” Greig added. “Small school guy, then I went to an open tryout in Wilmington, my first year in the USL, and made it. Then I ended up being the leading forward goalscorer. It’s just kind of funny how it’s all happened and then piece by piece it came together. Hopefully my hard work keeps getting me to the next level.”

It’s a great story of self belief and talent overcoming obstacles and the lack of opportunities. Greig knows he now has a big opportunity to impress Whitecaps management and he wants to grab it with both hands.

Koch is already impressed with the 6 foot 2 striker after seeing him action with OKC last season and was keen to add him to the ‘Caps squad for this year’s campaign.

In a sign of how small the world of football is, Koch was a coach in the NAIA for Baker University, Benedictine’s big rivals, leaving for SFU in 2008, the year Greig started college.

But the ‘Caps coach knows all about what Greig can now offer his current squad.

“He’ll give us a bit more maturity, a bit of leadership,” Koch told us. “He’s also hungry. He’s certainly not at the end of his playing career. He still wants to continue to play and go as far as he can. He’s a welcome addition. He’s got the character we want, he’s got the leadership we want, and he’s a good footballer too.”

That character is huge and readily comes across when you talk to Greig. He’s the ideal player Carl Robinson looks to bring into the Whitecaps, who wants to work hard to make himself better and play at the highest level he can. He can also score goals.

“I’m a hard worker,” Greig told us. “I think that’s what’s gotten me this far in my career so far. [Fans] can except to see hard work and I like to get myself into dangerous positions around the goal, and I like to score with me head. I consider myself a pretty standard number 9, target forward. That’s kind of my style.”

And just what the Whitecaps are needing. In Greig and Sanner, they look to have two dangerous target men, if they can turn that potential into results.

When the initial reports broke about Greig coming to Vancouver, the term “veteran” appeared in many of them. That got me checking online as I remembered him here last season as a young guy, and he is. He’s only 25-years-old!

It strange to think of a player that age being classed as a veteran but then you look at the likes of Russell Teibert who is still only 23 and has five MLS seasons under his belt already.

Koch used the term himself when talking of the striker, although he did add “if that even exists”. As for Greig, well he’s just not really sure what to even make of all that talk and how he aged so far in footballing terms.

“Yeah, it is [weird],’ Greig says with a laugh. “I’m 25, so older than a lot of the guys here, so maybe good to bring in a little bit of experience with the league since this team’s only been here for what will be two seasons now. It was kind of strange being considered a USL veteran. I don’t really like that!”

He’s going to find himself the oldest and most experienced players on the Whitecaps USL roster as things stand, so it’s not a tag that’s likely to go away.

Greig heads to Vancouver with his wife Emily, his college sweetheart who played on Benedictine’s volleyball team. They got married in May last year, eight days after he scored against WFC2, and his visit to Vancouver had already made a lasting impression on the striker.

“It’s funny, after we came here and played last year, that was like a week before we got married,” Greig told us. “I told my wife, in the offseason we should go visit Vancouver, because I just got here and I was taken aback about all the outdoor type things. How you can do so much. How you can ski and go to the beach and then do all that in one day. 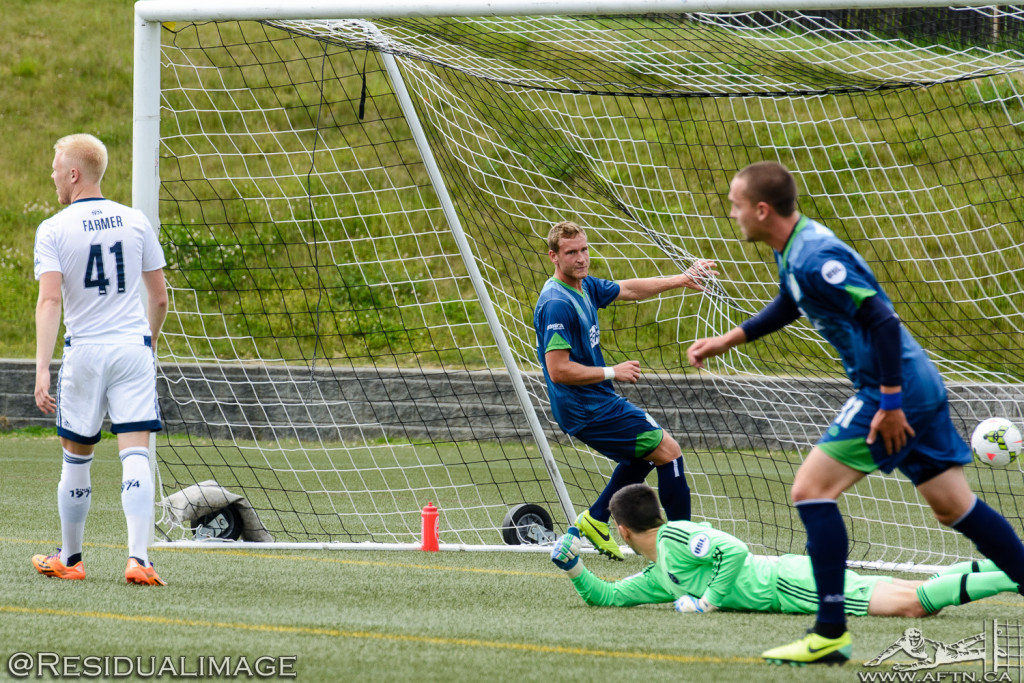