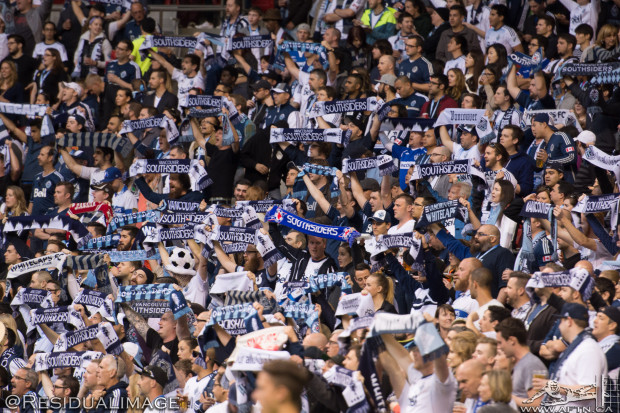 We mentioned that we’re adding a slew of new team members to AFTN in time for the season ahead, so please welcome aboard Chris Corrigan (@SalishSea86 on Twitter, give him a follow). Chris is a long time Southsider and will be a columnist with a heavy leaning on supporter culture, amongst other things. You can read his bio, and those of the rest of the AFTN team above.

There is an old tale from the Scottish borderlands about Tam Lin that was brought to mind this week. Tam Lin is a character who is kidnapped and imprisoned by the malevolent Queen of the Faeries. He worries that he will be sacrificed by the faeries and be sent to hell unless he is freed. Enter Janet, his lover, with whom he secretly conspires. He can only be freed by being held, and so he instructs her to attend a procession of the faerie knights in which he will participate and to pull him down from his horse and hold on to him tightly. He warns her that the faeries will try to frighten her by making him change forms into all kinds of different creatures, but if she keeps holding on to him, eventually he will be freed.

And so it is on the Whitecaps front these days. A team which did so well last year, has been augmented and changed. We have signed guys we know nothing about, guys we have hated, invested in guys we have doubted and lost a guy we have loved.

For supporters it’s like being Janet in the Tam Lin story. We have to hold on and trust that our manager is remaking the team in a way that will free it from the curse of anaemic offence and late season slumps. It is taking some very interesting twists and turns, but our job is to hold on.

There are a handful of supporters that have been with the team since well before the MLS era. But for most of us who are a part of the supporters groups today, MLS was our excuse to get more involved. And for many us, Gershon Koffie was the guy that made the transition with us, from a handful of games at Swangard, to the famous MLS opener at Empire, through all our Cascadia and Voyageurs Cup wins.

You can come to take a guy like Gershon Koffie for granted. It’s hard to imagine the team without him.

But things change. It is clear now that we are going to be a club set up for the long term, in which we buy or develop young players and move them on. We will augment them with veterans brought in more for their changing room presence than their on field contributions, although they have to do that as well. We will likely be the most exciting team of players no one has ever heard of for the long haul. You’d be hard pressed to find a supporter that would disagree with that approach.

But there is a cost to Robbo’s philosophy. We are going to have our hearts broken from time to time as great young players move on. There may come a time when Matias Laba, Kekuta Manneh and perhaps even Kendall Waston are called away to bigger stages and more lucrative pastures. We would never begrudge them this move, just as we can’t begrudge Koffie a chance to shine in New England and perhaps take a step closer to the European future to which he has often been linked. But this will sting from time to time and it will call on us to trust our supremely trustworthy manager. When he spots talent in a guy like Deybi Flores or Jordan Smith, even when it’s not readily apparent on game days, we have to just hold on and go with it.

Support is what is asked of supporters. Support beyond mere boosterism. Support beyond cheering when the times are good. We lay it out for our players and their manager and coaches. We’re about the guys on the pitch that are giving their all for our collective pride. And we live and die with them, openly and unreservedly.

Vancouver has a particular character of detachment and aloofness when it comes to culture and participatory culture in particular. Perhaps it’s because showing vulnerability in an uber-cool city is a sin, considered an indicator of naïveté or unsophistication. But to be a supporter means showing your vulnerability from time to time, whether it is getting past the embarrassment of loudly singing in public, or being willing to be sentimental about a long time squad stalwart departing on the next stage of his journey.

It’s an emotional investment to care for a team like a fool. But it means the world to those guys down on the pitch, who have devoted their lives to playing for our team, sometimes making less money that most of those watching them. We pay our money to the front office, but we save our loyalty and affection for the players.

As we enter 2016, so much has changed. We’re lucky to be witnessing a strong period in the team’s fortunes and this is the time to solidify our support. Lots of folks will ride the crest of the wave because Vancouver loves a winner, but if we can hold on to some of those that come, maybe up their involvement and get them into the Southside, we can all do for our supporter culture what Robbo is doing for the team. Moving from strength to strength, trying new things, keeping an eye on the prize of becoming the best in the league.

As a Southsider of five years, I’m excited to see if we can get a new wave of people involved, hooked on creating the experience and giving our guys on the pitch something special to play for.

I’m excited to start writing at AFTN and sharing the stories from the supporter’s section. I’ve enjoyed Michael and the crew’s work over the years and I like where we’re trying to go with AFTN. We have a great roster of writers and podcasters who produce one of the best, deepest and most comprehensive electronic ‘zines in MLS.

My seats are in 253, up near the top of the Southsiders’ section amongst a group of people that have dubbed themselves Pigeon Casuals because we hang out where the birds roost. We are all about welcoming you in, and making it easy for you to be a part of what is going on. We want you to be a part of the story that is emerging in Vancouver, we would love for you to become a regular as we start a run of years that will have us undoubtedly challenging for and acquiring silverware. We have lofty expectations.

Hold on tight. We’re all just getting going.