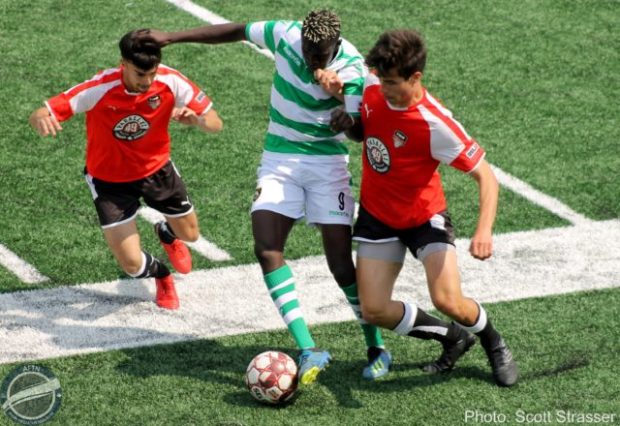 Calgary Foothills FC U23 maintained their unbeaten start to the United Soccer League 2 (USL2) season with a 3-2 victory May 24 and a 0-0 draw May 26 in a double-header against Vancouver TSS Rovers, at Hellard Field in Calgary.

The four-point weekend against the West Coasters means Calgary remains atop the standings in the Northwest Division of USL2, with three wins and a draw.

While the May 24 game produced five goals, the scoreboard operators didn’t have much to do in the return fixture on Sunday. But despite a lack of scoring, it was as entertaining a nil-nil draw as you could hope for. Both sides looked to threaten and there a few heated moments near the end of the first half, concluding with the ejection of TSS Rovers general manager, and head coach, Will Cromack.

“They’re two good teams and it’s a Canadian rivalry,” said Foothills head coach Leon Hapgood. “They want to beat each other and they know each other. The league is tough, because there are only so many teams in the league so you have to play each other two or three times, and sometimes back to back.”

In this case, it was back-to-back-to-back; Sunday’s 0-0 marked the third time in a row Foothills and TSS played each other this season, after Foothills initially overcame the Vancouverites 2-1 at Swangard Stadium on May 19, before meeting for the double-header in Calgary the following weekend. 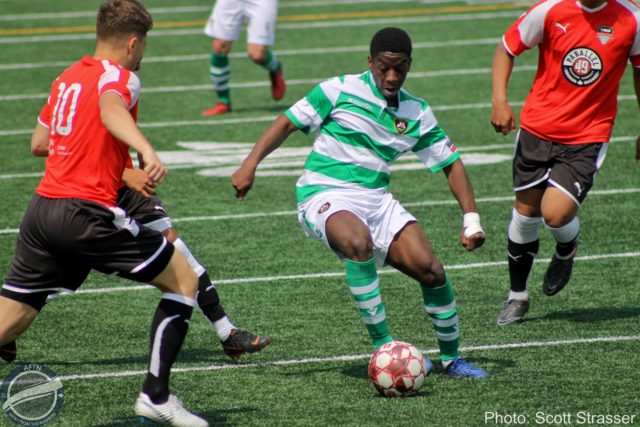 Foothills’ goals on Friday came from Willy Akio, Dan Hayfield, and captain Tofa Fakunle, while the newly signed Kristian Yli-Hietanen and Matteo Polisi, with his fourth tally of the season, netted for TSS Rovers.

“The reality is, we want to beat each other and we’d already beaten them twice, so [TSS] came out ready for the game [on Sunday],” said Hapgood. “They came out on the front foot and were willing to put their foot in.

“It’s a bit like a wounded animal – if you wound an animal, it’ll react. They got their point today and they’ll take that with them back to Vancouver.”

The visitors’ efforts appeared to pay off after 28 minutes, when Elie Gindo headed home an indirect free kick. But Gindo’s run was milliseconds too early, and the goal was called back for offside.

Ten minutes later, Rovers head coach Cromack was ejected along with defender Eric De Graaf, who suffered a knee injury in Friday’s match and was watching on crutches from the sidelines.

For fans watching the YouTube live-stream, it was unclear what prompted the dismissal, as there was a temporary freeze leading up to the incident. But from the commentary, it appeared Calgary player Marcus Camponile had been given a yellow card a few minutes before. There had also been an indirect free kick awarded to TSS in Foothills’ box, which was blocked by a wall of Foothills players. 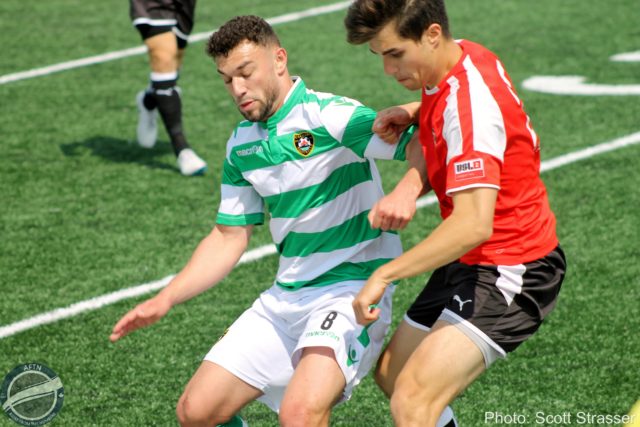 After what Hapgood described as a flat start, Foothills looked a much better side in the second half.

“First half, we were too individual,” he said. “We addressed it at half time. The players accepted where we were at and when they came out in the second half, I actually thought we were the better team. [Vancouver] had a five-minute spell, but other than that, I felt we were on the front foot and creating more…half- chances around the box.”

Despite Foothills’ positive start to the second half, it was TSS who nearly broke the deadlock. Connor McMillan leapt high to connect with a cross from the left wing in the 64th minute, but his close-range header pinged off Calgary’s crossbar.

Like in previous games this season, the front-line trio of Akio, Fakunle, and Cory Bent looked dangerous for Foothills. Fakunle came close to finding the back of the net in the 69th minute, when he had to slide at the back post to get a left-footed shot off, following a low cross from Bent that flashed across goal. But the shot went wide. 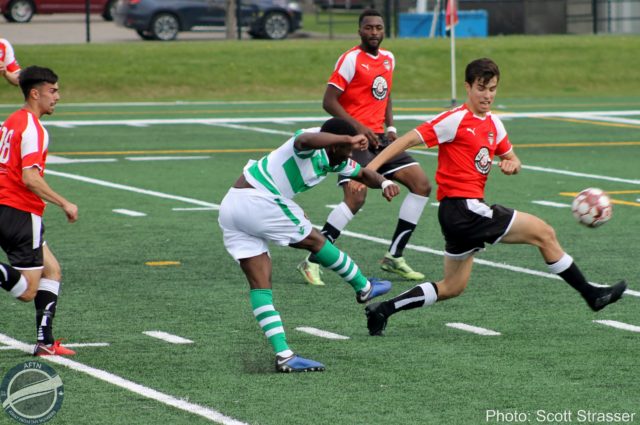 Cory Bent fires a shot towards goal near the end of the 0-0 draw on Sunday.

The Calgarians had another opportunity go begging in the 74th minute, when Akio did well to round three Vancouver defenders before firing his shot towards goal. It would have been a fantastic individual goal, but his right-footed strike was aimed right at Rovers’ keeper Luciano Trasolini, who palmed it away.

“We’re a bit frustrated today, to be honest,” Fakunle said. “Credit to TSS because they made it difficult for us, but we need to take a look at ourselves. Leon, our gaffer, was right today when he questioned our effort level at half time. We had to come out with a statement. We were better in the second half, we just didn’t put our chances away.”

Regardless of their first dropped points, Fakunle said the early weeks of the season have been highly promising for a very young and new-look Foothills side. Despite the rebuild, the defending champions are still riding an unbeaten run that extends back to June 1 last year, when they lost 2-1 to TSS Rovers.

“It’s just a bit frustrating because we know we can do better,” he said. “But we haven’t lost yet, we’ve played four games and we’ve collected 10 out of 12 points, so it’s not a bad start.”

Foothills’ next match will be a road trip to Portland May 31 to June 2 for a double-header against the Portland Timbers U23s. The Timbers have struggled so far, with four losses and a -12 goal differential.

TSS now have some time off to regroup after a hectic start to the new season, returning to action on June 7 at Swangard Stadium for the first Juan de Fuca Plate match of 2019 against Victoria Highlanders. The match is a special charity night. Tickets are free to all, with a $5 donation also being made to the charity of your choice. Full details can be found HERE.