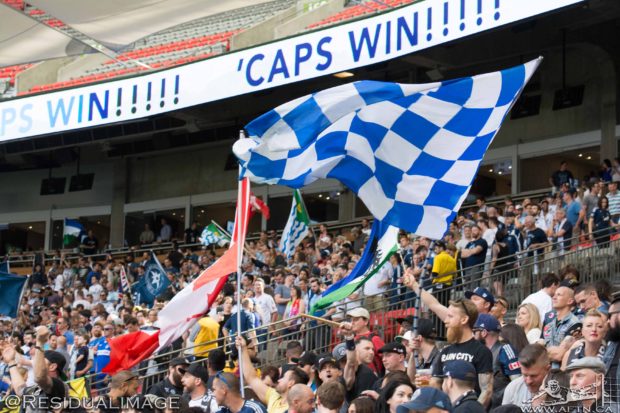 I was watching highlights from September 27, 2014 today. That was, I believe, the last time the Caps came from behind to win at home. It was against RSL and it was the first of what Carl Robinson called “five cup finals.” We basically needed to win them all to make the playoffs.

That match started poorly and the last kick of the first half was Pedro Morales’ missed penalty. Coming out for the second half Nat Borchers scored for RSL and our hearts sank. Not even the incentive of five cup finals was going to get us through this game.

But with an Ousted save, a Morales penalty, another save, and a Morales goal, we won and were on our way on a run that would only be stopped in the post-season by Kendall Waston’s hand and Mark Geiger. That afternoon was insane in the Southside. We moved from despair to relief to a feeling of total domination.

Last Sunday was our first 2016 Cascadia derby at home and the first goal was scored by Nat Borchers. We met that with Kudo’s first and a cheeky chip from Bolaños and we left logrolling the Timbers Army out of town. Three points earned from a hard fought comeback.

As it was up and down on the pitch, it was the same in the Southside. One of the curses of derby days is that the scalpers and resellers make a killing, especially selling tickets in the supporter’s section. It drives us all crazy, because on important games when there is tifo to be deployed and unified singing to be done, the section fills up with first timers or tourists who were sold a ticket “in the atmosphere” and who show up bewildered and shy.

Vancouver is not a city where carrying on in public is easily done. The result is often that the Southside gets asschipped by people who can hear the Timbers Army better than they can hear us. “Why don’t you guys get your shit together?” we get asked.

The answer is that we are trying to do that. Every. Single. Game.

The history of why the Southside is structured like it is goes back to the pre-MLS era when the club was getting ready to move to BC Place and the supporters groups were finding their way in the new arrangement.

We were all over the place at Empire. I had seats kitty corner from the supporters section, and there was no way to get them moved until we hit BC Place in October that year. Meanwhile, the club was doing funny things with pricing and blocks of season’s tickets. The result was that we arrived in BC Place fragmented and separated and spread around gently rising sections that made it hard to hear each other, deploy tifo, and coordinate chants.

To make matters worse, in the middle of our section was a massive tunnel, a hole right through the centre of the Southside. I think we must be the only unified supporters section in MLS, and maybe in the world, that is so physically divided.

The oral history of this time is fascinating. You will hear many different versions of why there are so many supporters groups spread out, but the bottom line is that the physical layout and the tunnel especially is the most significant thing that divides us.

We all addressed this issue in a few ways.

Curva Collective bought a block of tickets that they shared with their members, which was a high risk strategy as they became the de facto resellers, holding about 100 tickets pre-game. But at least they could call the terms, and as a result they have a concentrated section devoted to a single style of support. It’s not easy to grow beyond their confines, but their influence spreads out of their central core.

Rain City Brigade, a group formed first from friendship, all bought tickets together, adopted their own style and became a special forces monochrome army, placed right between Curva and the tunnel.

For our part, the Southsiders spent a couple of years negotiating with the club and finally got a window of time when we could relocate members in a more concentrated way. We moved the drums up ten rows from pitch level and those of us scattered around from 251 to 254 came closer together. At that time I arrived at the top of 253, standing with a great bunch of folks all devoted to watching, singing, bantering and popcorn fights.

At some point a pigeon flew out of our ranks and landed on the field and we all sang “Pigeon on the pitch, say pigeon on the pitch, hey hey!” and out of that a little identity was born: Pigeon Casuals in the Pigeon Loft. That small hook had the effect of binding us together.

Towards the end of last year we all decided to do something about the atmosphere in our section. It can’t be down to the Board of the Southsiders to unify a couple thousand people into a single presence given the constraints and logistical challenges facing the section.

We started doing little things: printing out song sheets, carrying armfuls of flags up to the Loft, carrying chants backwards by being embedded capos. When we saw new people, we welcomed them with a flag, introduced them to what was happening, helped them learn chants. It doesn’t take much. Some things worked, others didn’t, but we kept to our basic principle of welcoming people and assuming that if they are in our section they are there to participate.

Not everyone’s into it. It’s funny to watch people refuse to take a flag. Some people even sneer as they head past us down to their seats in the section. They are usually still sneering when they are on their way out in the 83rd minute. It doesn’t matter to me that they do this. I find it odd and a bit weird, but to each their own.

What’s better is the young kids who are new to the section being the first to pick up flags pre-game. A couple of those kids are there before nearly anyone, and they are the first to wave. Look over at 253 at any weekend home match and you’ll see young Mark flying a flag before most people are even in the stadium.

The Pigeon Casuals aren’t the only people doing this. There are other pockets of supporters that are beginning to act together and both our East Side and the West Side neighbours are starting to get more involved as well. It’s slow, especially when the team is struggling, but it’s happening.

A comeback win in a Cascadia derby is a beautiful chance to build the culture. To be a part of a game of ups and downs, to have contributed to the atmosphere and savoured the victory is what brings people back to sing and participate.

In many ways, building supporter culture at BC Place is a come-from-behind prospect. We started three goals down back in 2011, but by adopting an open, creative and practical tactic, we’re clawing back ground and making some progress. You can’t force people to do what they don’t want to do, but you can tell them how they’re needed and offer them a chance to contribute. Every voice matters, every flag flown looks great, every desire to be a part of it builds it out a little bit more.

Culture is a bottom-up, self-organizing phenomenon. It emerges and evolves in all kinds of places simultaneously, like a cloud. When the conditions are right, the cloud spreads across the sky. When they aren’t, little pockets appear and fizzle out. Over the past year we’ve learned that thousands of small actions are better than a single coordinated effort. Things work and fail with almost no discernable pattern. But when they work they stick, and when they don’t there’s no harm done, and that’s enough to keep going.