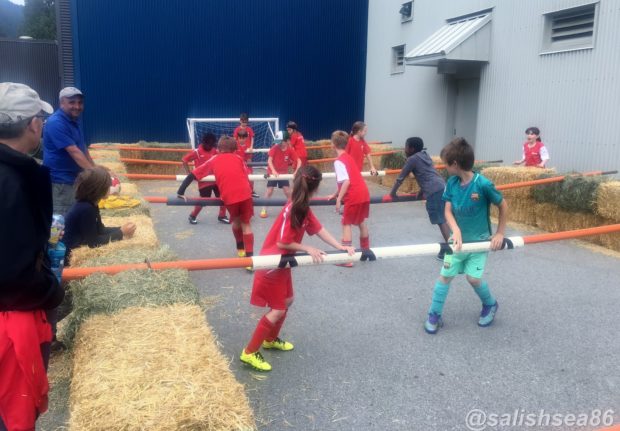 I couldn’t make it to the Whitecaps match on Saturday. There was a far bigger game being played, one that took all my attention and had much more meaning.

It was a six a side match between the alumni of the Bowen Bears and their parents and former coaches. The Bears were formed in 2010 to play U11 for Bowen Island FC. They were a group of 16 (on a good day) young boys and a girl, all of whom were relatively new to the game. The youngest, Molly Quarry, was two years younger than her teammates. Their first two seasons were an exercise in dismal, if you were only counting results. They lost games by big margins against bigger clubs. They were decimated in tournaments as they continued to learn the game.

But what was happening was that they were learning. They were learning to play as a team, to develop their vision, their individual skill, and learning to take a loss and have it inspire them to get better. Eventually, they clicked. They played a beautiful, strong, possession-oriented game.

It’s hard on Bowen Island to keep a team of teenagers together, especially as they split into various levels. But without exception, every kid from that team went on to play for mainland clubs at the level at which they wanted to play. My son Finn and three of his teammates were part of an invincible season two years ago and won the U16s triple at West Vancouver SC. Others went on to play Metro and soon VMSL, and Molly, who has made 15 appearances for the BC Provincial team, is about to enter the REX this fall. Yeah, we’re proud of her.

To celebrate these players and inspire the next generations, we played them at our 10th anniversary Soccerfest in a “friendly.” The young guns are all about speed and possession. They have been coached well. Their give and gos were so fast, we called them “gave and wents.” They ran circles around us always looking for a goal, but we knew what they were doing. Experience can be an asset. Us old guys held our shape, and countered time after time into the space that they left from playing a cheeky yet disorganized 0-0-5 formation. At the end of the match it was 3-3, and an ambulance was on hand in case one of the parents expired.

We offered a well-deserved draw but hubris got the better of all of us. Extra time ensued. They pressed high, we met them with an effective 5-0-0 formation until finally, our MVP keeper Richard “47 saves” Wing lobbed a clearance high over the ten outfield players that grazed the top of their keeper’s out-stretched arm and sailed under the bar for the winner. The elders have been singing “Campeones! Campeones!” ever since.

This is where the passion is built.

Local clubs all over the Lower Mainland are the sources of passion and knowledge that drive the game. Ask around in the supporter’s section at BC Place and you will find people that played the game for local teams, that coached or parented and are still involved. On Bowen we are trying to make the club more than just a kids’ program: we want it to be a place where our community comes together around football and football culture. We don’t just want that to mean watching Champions League finals and the World Cup together either, but also understanding that what we are doing locally has an effect on Canada’s development internationally.

Supporter culture is about an expression of community. Can you imagine if the Whitecaps ran a “local club” day where everyone came in the shirt or scarf of their local clubs to support the ‘Caps together? Just one day, when the greens and reds and oranges and fluorescent yellows of local club football were on display as a tangible representation of the diversity of effort that it takes to create Canadian soccer players. Let’s do that.

We parents and volunteers are the ones who start and understand the journey of our players. That’s why when the ‘Caps tweeted out a compilation of Atlanta United goals, it felt so disrespectful to our own players. We know what it means when our players suffer from their own parents or coaches shouting from the sidelines about how much better the other team is. Once you have seen it, you can’t get unsee it, and it doesn’t matter if your player is an eight year old beginner, or a grizzled veteran.

To me, that connection to the players is the source of my support. It’s why I enjoy making player chants so much. It’s about the characters like Jordan Harvey, or Andy O’Brien, or Jay Nolly, that get this bond. It’s like the TSS Rovers’ keeper Andrew Hicks stopping a penalty, preserving a draw against Portland, and then celebrating by downing a lager with The Swanguardians.

While the Champions League Final was going on in some bizarre stratosphere of unattainable human achievement, 300 people were playing skill games, competitive friendlies, and human foosball on Bowen island. Sure many of us went home and watched the match, but the enduring memory of the day had nothing to do with what happened in Cardiff and everything to do with the legends of Snug Cove.