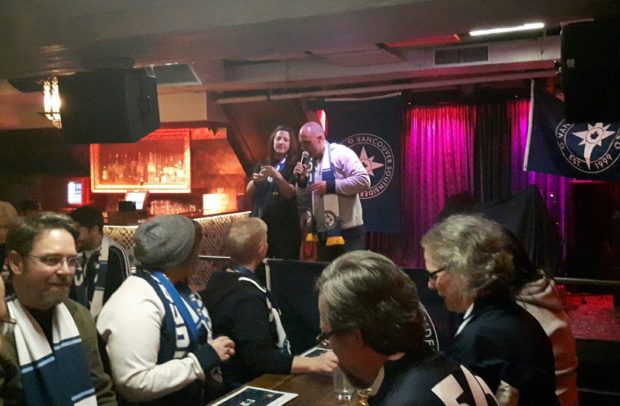 Last Saturday Carl Valentine appeared at the Vancouver Southsiders season launch party. If you’ve ever met him you’ll know that this is a man who loves the team, loves the supporters, loves the city. He’s upbeat, happy to see everyone, and revels in the adoration we wash over him with his song about being our Valentine and playing till ninety nine.

He takes time to connect with people, speaks honestly about the state of the team, but wears hope and, yes, optimism as a tattered badge of pride. He’s seen enough ups and downs over his career as a player, and ambassador to bring some perspective to it all.

Guys like that inspire me. The whole event last Saturday inspired me. It was good to connect with old friends and see the fresh ideas beginning to bubble up. We’re ready for the season.

Last Saturday, Johnny Knox, a long time Southsider and a current board member shared with a small group of us some of his thinking for the year ahead and a few key points stood out. First, this is a year of renewal and revitalization for the team and the supporters groups. So we’re devoted to new things in new ways. In the Pigeon Loft we’ve got some new scarves and some new members and some new songs too. I think we’re all keen to get to the stands and get singing. 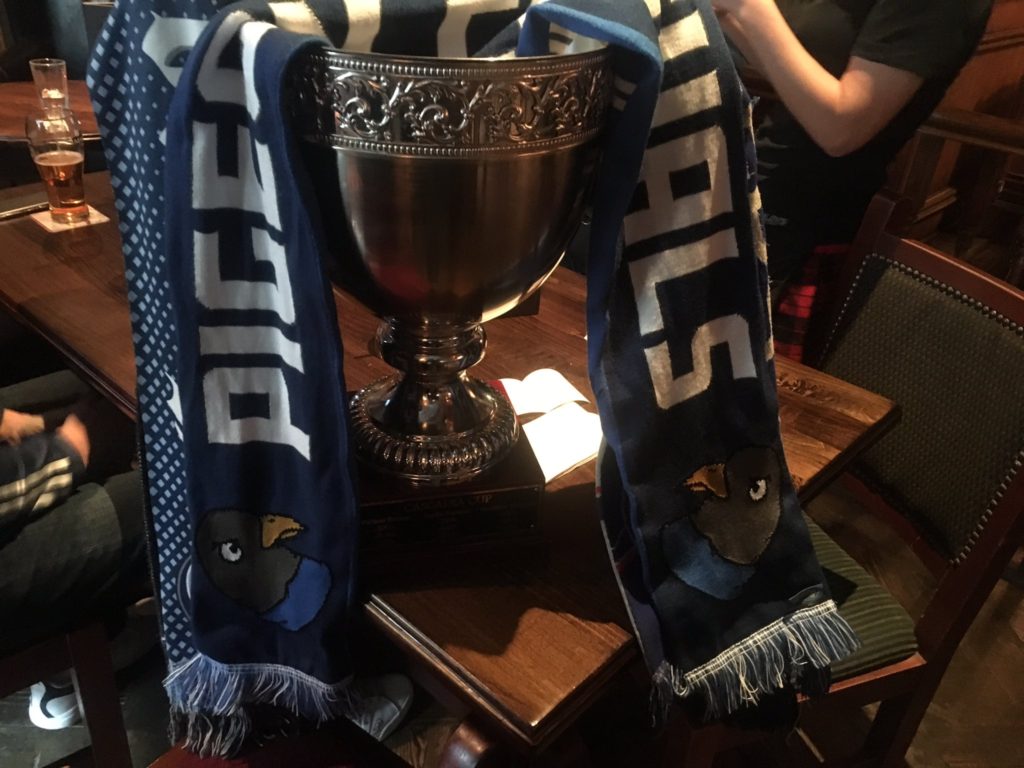 But another thing Johnny said that stuck with me was that supporters carry the history and character of the team in our hearts and we have a kind of responsibility to tell that story more.

Our supporters have seen this team through five leagues and 40 years. They have witnessed remarkable championships alongside poor seasons and the collapse of leagues. Many of us came to the Whitecaps later in life, as a team that was perhaps the second or third team that we have grown to love, but there are significant numbers of supporters throughout BC Place that grew up loving this team, and have handed down that love through two or three generations.

One of the things that makes the Whitecaps different from Europe is that we aren’t actually a “football club”. We are a franchise of a bigger league and what suffers in that structure is the team’s connection to supporters. In Europe, outside the massive corporate monsters, your local football club IS your local social club. You are a proper member with a vote and a stake and the ability to influence decisions. You can rent the club house for your wedding. You can have a drink at the club bar. Not so with our MLS franchise.

But this is where North American supporters clubs fill the gap. We carry that aspect of active and creative belonging that MLS franchises don’t usually do. We carry a commitment to history and a love of the city that is incidental to MLS’s commitment to our “market.” When adidas points out what rain means to us, we rightly point out that we play in a covered stadium for a reason. If the team won’t release a jersey with a hoop on it, we’ll produce a scarf that forms the hoop anyway.

We do this because we love the city, we love the game, and we want the players to feel that when they pull on a Whitecaps jersey. Thousands of people have followed this team through it’s tortured 40 year history and have been there as it resurrected itself in league after league, representing Vancouver, representing a very proud history of accomplishment. We have high standards for the stewards of this team because they carry a responsibility for this love, infused in the Whitecaps name, propelled by the desire of Vancouverites to be well regarded in the world, fuelled by a desire to win championships.

For me the support we generate is first of all for the players. It’s like a shout out to them to remind them of who they are playing for. At it’s best it’s a roar of history and encouragement to them to take the “Vancouver” part of the crest seriously. To understand that we’re not just paying customers, we are also citizens. When you’ve played for the Whitecaps (or the 86ers) and you get this, you are adored for a long time. It doesn’t matter how many games you’ve played: whether you are a Carl Valentine or a Maloud Akloul, a legend like Dominic Mobilio, or a little known pioneer like Terry Felix. If you’ve sincerely pulled on the Vancouver shirt and remembered this (and not every player has or does) we will ensure you belong to us for all time.

So it’s time now to get back in the stands, and remember what we are doing there, creating expressions of our love for the city, the region, the players and the history. I’m looking forward to it. We’ll sing out inside jokes and cultural references. We’ll pour our creative efforts into tifo and videos and shirts and match day posters and writing that represents our city and our love of the game and the players that carry us with them on to the field.

The Southside is a place for creative expression of all kinds – bold and loud, rude and witty, energetic and inspiring. Join us there and participate, see for yourself what it’s about at least once this season. Come and offer your creative talents and efforts to one of the few places left for participatory civic, public, and citizen-made art and culture.

And if our season goes sideways again, we’ll still be there up in the Pigeon Loft, waving flags and singing anyway.