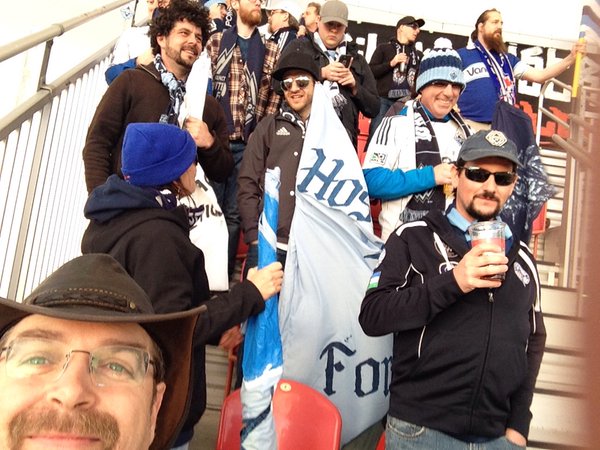 There is dispassionate criticism and then there are feelings, and they aren’t the same. A critic looks at what is going on and notes the objective reality: no goals from open play, winless and shut out in three, injuries riddling the squad, sub-par performances from players that we know can do better, from a team that is capable of so much more. From this platform, we might speculate about why and pour over stats and formations, substitutions, in-game decisions and a myriad of other factors. We might even find a person to blame.

And while criticism is one thing, feelings are another. The team is a screen on which we project our relationship to the world. This is why football is life.

Somehow in Vancouver, there is a strange unfamiliarity with support. I’ve sensed it in a kind of cynicism that pervades the culture in general. There is a sense that to be a fan means enjoying the good times, but somehow rushing to be the first with a cogent and well reasoned argument for why you can claim a moral superiority with angry, personal rants against players, the manager and even supporters.

It’s baffling to me.

In the course of a short run of poor form – and if you don’t believe this is short there are Aston Villa fans in our midst you can ask – many pixels have been spilled online by the voices of people who seem to be going out of their way to tell the rest of us that we’re just too positive and that all it’s doing is enabling the front office to continue penny pinching our way into mediocre profitability.

You can see that there are arguments buried in these rants, but it’s difficult to address them because there seems to be so much woundedness behind the way in which these statements are delivered. If you’ve personally been called out on social media like this, you will realize that there is no arguing with your nemesis. You are not working at the level of logic. Someone’s got some bitterness to work out and the Vancouver Whitecaps are the canvas on which is it being worked out, with sometimes an unfair step over the line to personal insult.

And actually that’s all fine, because as I said, football is life. What I love about the sport is that it seems unlike so much of our compartmentalized culture. Football is one place where it’s acceptable to bring our full emotional selves into the fray. That’s what leads to great and boisterous support, collective outpouring of joy and love and appreciation for a thing that shouldn’t matter but somehow does anyway. It also leads to the kind of over the top anger and disappointment of the shitlarks: those that take up residence in the perch “above it all” and nevertheless enter the emotional fray. It’s interesting to see who comes out of the woodwork to pile on everybody else when the times are tough. They tend to be silent when things are going well and their sense of entitlement is being served.

When we win, the players acknowledge that we had something to do with it. But when we lose we don’t want our share of the blame. Are we actually all just separated observers from what goes on on the pitch? Are we being just pandered to when we offer great support? Or does the ubiquitous and intangible “support” we offer actually have an effect? And if it does, what is the effect of a bullrushing of negative shitlarking just as the team has begun to shift from a physical to a mental and emotional set of problems? When we say to the team that they need to try harder, are we not also pointing the fingers at ourselves?

When the team sucks it throws up ways in which we suck too, when we can’t accomplish what we want to do and we throw out our anger at the team because we hate the “us” we see in “them.” When they do well we take pride in it and claim a piece of that for ourselves.

This past weekend a small and intrepid group of #CapsOnTour from the Southsiders, Curva Collective and Rain City Brigade made the trip down to Salt Lake City perhaps in defiance of the idea that we weren’t trying hard enough. Does it have an effect? I don’t know but our only job is to support.

That means we showed up all supplied with a bevy of flags that appeared from Zach’s trunk, all grooving to Phil’s blister fingered-drumming, all standing defiant at the RSL fans who were bundled up in toques and jackets while we flung off our shirts and sang “It isn’t cold enough, it isn’t cold enough” to the tune of La donna è mobile. We got a little wave from our talisman Jordan Harvey at the half and a nice acknowledgement at the end from a bunch of the rest.

That’s what we can do. We ask the players to do their jobs, and so to the best of our ability, we try to do ours.

Hanging with the Real Salt Lake supporters you get a clear sense that supporter culture can be a defiant voice of counter culture that is inextricably linked to the culture of its place.

Utah is a place of bifurcated identity. There is the well known Mormon culture in the one hand and a fierce response to it on the other. Supporters groups like the Rogue Cavaliers Brigade are one face of that response. They carry scarves that read “We’ve come for your wives” and they drink tequila out of a keg called “The Kegorita.” They discuss coffee. They are anti-homophobic and inclusive. They enjoy bucking the trend, which in Utah can sometimes be a high stakes game. Of course belonging to a supporters group where swearing and drinking and having their own kind of fun is both tolerated and encouraged is an antidote to the quiet, moderate and conservative culture around them in which they do not fit and are not allowed.

For them too, the team is a place to project their own feelings – outsiders, taboo-breakers and working with a kind of bond that is self-generated rather than imposed by an outside authority. For them right now, undefeated and flying high in MLS, the teams is a vindication of the place they have claimed in the world. For us, alienated in a city in which no-one can afford to live, our team too seems to capture a moment in the culture.

This is not the worst of times for the Whitecaps. But it’s not the easiest of times in Vancouver, either. I get that. Maybe your local economy sucks. Or maybe it doesn’t but you can’t find a place in the “prosperity” that surrounds you. Maybe you’re let down by the promise of the good life that oozes out of every Lululemon poster and every real estate billboard. If you look through the red mist of what is being projected at the team and the players (and even some supporters) you can see it.

This isn’t about our scoring woes and this isn’t about or manager or our front office. This is about being left out, let down and disappointed. That is the mood in Vancouver right now, and that is actually what supporter culture is an antidote for: a place to come and set it all down for a couple of hours and live and die, and sing and moan with a bunch of fellow citizens for a bunch of players who will offer you a wave in return. A place to quiet the conflicted feelings that the broad culture of alienation conjures up, and a place to work the muscle of participation and togetherness. It is not naive at it’s core. It’s not a booster club. At it’s best, it’s the medicine.