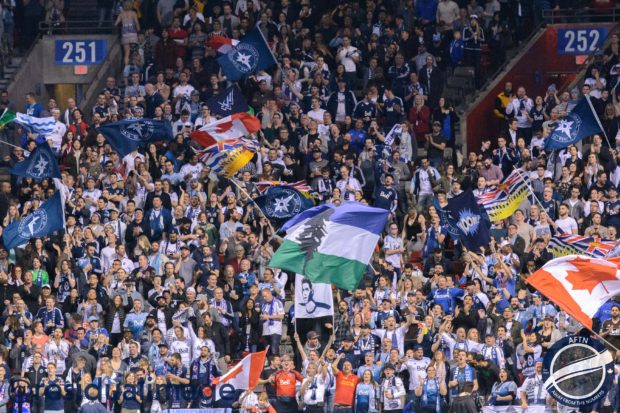 It wasn’t the best week in supporters land. In some way the international break had probably done the trick in the locker room, but amongst the supporterati the mood was foul with small glimmers of hope. Before the match started I wandered through our section, saying hi to the clueless and the tourists that had been suckered into our section by the resellers and scalpers. We had a bunch of song sheets printed up, so I did my best to hand a bunch out, brave smile on my face, welcoming them to the Southside, showing the kids how to wave flags.

The pre-game music was at a decibel level that could only induce tinnitus and apathy. The front office has not yet received the message that this particular practice is demented, but maybe they’ll hear it now, if they can hear anything. The only atmosphere was the thickening air of dread that rose amongst the few dozen of us in the section, bravely trying to put our best faces on.

We were even short a drummer, and after we sang Boundary Road, Paul motioned me down from the Pigeon Loft to take a half on the drums. Screw it. I’m always complaining about how slow the chants are. Time to step up.

I have blisters on my hands from beating that drum for the whole cursed first half. After LA scored, I had the thought that perhaps nothing is going to help us. I reflected that I had never drummed for a winning half. But I kept going. Drum a bit, start a chant or two, try to have some fun. We got off a Grimsby Town “clapclapclapclap fish” chant and a rough run through “Vancouver Nagila” before defaulting to the old standards and a couple for Christian Bolaños and Sheanon Williams. But when Cristian Techera had his second chance at an open net goal and missed bringing us level before the half, I really thought the jinx was secure. I put the sticks down and went for a long walk.

I walked all the way around the east side concourse to 243 and poked my head out a tunnel. I sat in a seat and looked down at the pitch laid out in a way I was completely unaccustomed to seeing. I started taking stock of this predicament as a supporter spending too much time thinking about this team, feeling unheard by the front office, and if I’m honest, a bit hurt by the fact that most of the players don’t even acknowledge us after the match. Just in a general Eeyore mode. Barely able to muster the energy to get back to my seat.

I had the merest notion of a thought that maybe something similar was going on in the locker room too, a stock taking that drew a line under moves like Erik Hurtado’s ill conceived 60 yard chip that said, “no more.” Fight on a fucking Saturday, perhaps. No more surrendering leads. No more caving in. No more of these deflating performances at home. I’m romantically imagining some little ripple that wove out of the locker room and spread throughout BC Place inducing everyone to step up just a smidge.

I’m sorry Erik is hurt, but I was happy to see Montero at the half. I rejoined the Pigeon Casuals and something just took us over. We were singing a whole bunch of new chants that we’ve brought to revive our match day songbook. The most popular was “We’ve got the ball/We’ve lost the ball” that went on endlessly during the first 20 minutes of the second half as both teams contrived to throw us off. But we stuck with it and finally were rewarded when Fredy Montero’s goal sent the Southside into peals of joy. And then Matias Laba, stepping up in a way no Whitecap had quite managed to do yet this year. And in his centennial game to boot.

We started singing for our players; new chants for Tony Tchani (Go go! Go Tchani Go!) and Bicho Bicho Man, and Sheananananananan Williams. We Ousteded and Harveyed and “Hey! I just met you! And this is crazy! But you’re fucked now! Cause we’ve got Davies!”

It was joyous, raucous, everything that is possible in this odd game that turns on a toe poke or a headed rebound, and it was capped off with the image of Jordan Harvey coming over to greet us and getting enrobed in a Pigeon Casuals scarf by Warren. We were the last ones out of the place, carrying banners and singing all the way down Beatty Street after the stewards threatened to ban us if we didn’t leave.

What a night, enfolded into a half-hour of delusion-feeding greatness. Spring was here, the Southside was rocking. We came back from 2-1 down to beat that smug Ashley Cole and his Galacticos, with two goals from our holding midfielder.

Whatever apocalyptic problems we had last week with the club and BC Place and the team and each other had magically evaporated in a cloud of tossed beer and goal steam.