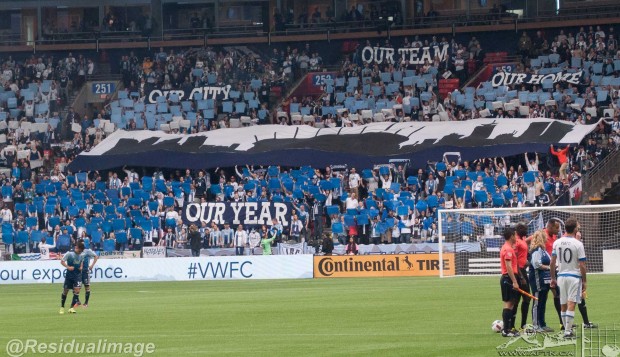 It’s bad times, eh? It seems like years since we have won a match. To listen to the dull moan of Vancouver football supporters you’d think we’ve been languishing in the basement of the league for decades, not good enough to win anything, but stuck in a league with no relegation to put us out of our misery.

The basement in the MLS is just that. As low as you can go. There is no lower. I’ll be surprised if there’s anyone at all at BC Place at the end of the month when we host Houston in what will surely be our fourth loss in a row. There will just be a few hardcore supporters left making spontaneous tifo out of abandoned rally cards calling for Bob Lenarduzzi to be fired and yelling at Spike to “keep it down!”

Or something like that. I don’t know. Perhaps it’s premature after only two games to call for the manager’s head and a complete retooling of the side. I hear Mourinho’s available and Ibrahimovic wants to come to MLS. What’s the hold up?

There is a fine art to supporting your team when the chips are down. It requires a bit of practice to get it just right, so we’re lucky we have this horrible start to give it a dry run.

If you stood with us during the dismal season of 2011 you will probably already have this down to a fine art, but the team has played so well under Carl Robinson for the past two years that we might have forgotten how the ritual goes.

In 2011 we knew we would be terrible and so we took solace in the small things: Mouloud Akloul riling everyone up against Montreal; beating TFC in the opener; Wes Knight being Wes Knight.; coming back against SKC; Eric Hassli. When the big picture is not so clear, you wring the life out of the details. The Sons of Ben are just so good at this.

Having a poor run teaches you to appreciate the good times. If you can’t do that you end up like a bitter Arsenal supporter, calling for the manager’s head because you’re only third and you haven’t won the league by March. God forbid we should all become as entitled as that.

This fine art starts with balancing disappointment with hope. Hope is most naive of emotions but without hope you are not a supporter. Hope is the drug the front office would like to sell you, but they don’t deal in it. At times like this, you get hope in small dime bags. Every time Jordan Harvey sticks his head on a ball off a corner. Every time Kekuta Manneh goes on a mazey. Every time Kendall Waston heads another clearance out of the box. Little glimmers of hope. These are for you, true supporter. Let the shitlarks have the red cards, the unheard appeals, the nutmegged defenders and the managerial platitudes. These will pass. Hope springs eternal.

Once you’ve cultivated enough hope to breathe, you then need a little perspective.

It’s okay to admit that we played poorly, but your job is to support the players. You know they are capable of better, so you point to their better qualities. You tweet them encouragement, not death threats. You try to use the relationship you have to admit that they didn’t look good in the first half but that you’re behind them anyway.

This is tricky to do, especially in a city that treats cynicism as a competition. As a supporter you are an antidote to that, but you can still feel disappointed. Perspective helps. Seattle is crap. Dallas is crap too. We are among the top teams in our division, awaiting our chance to strike. Cultivate a little irony.

The ninja-level of this art then becomes when you develop and sustain trust. In Robbo We Trust. This is where you need to hold on. Only a month ago I warned you that this season was going to be a bit of a ride (“Hold on tight”). Lots of your friends and co-workers and regular commuting buddies have been waiting for two bad losses in a row to say things like “I told you so” and “Robbo must go” while they ruffle their papers and read the Canucks news. But you have trust.
Hope, perspective and trust.

This weekend, a few hundred of us will take the trek down the highway to Middle Cascadia for the first derby of the year. And being an away trip, we’ll be in fierce voice and enthusiastic spirits. We have a chance to redeem our support against a rival that has started even worse off than us.

Seattle are a hot mess right now, having had their hearts broken by being bundled out of the Champions League, their top guys injured or sold and only a petulant Clint Dempsey to sing for. Ozzie Alonso, a guy that hasn’t scored for four years, has their only goal. Tough times at the fish market.

But we can draw hope from that. And we can take the perspective with us and throw it out the window.

This will not be an easy match, but being away supporters, we are required by law to sing for four straight hours no matter what, so we are absolved of the need to feign a know-it-all hipster attitude. We’ll leave that to those who are too cool to come on the buses. Instead we’ll lose ourselves in a long day out, taking this chance to bind together the supporters’ groups in a unified cacophony of noisy support and endless mocking with such spontaneous hymns as “not as shit, not as shit, we are not as shit as you! Oh we are not as shit as you…” Perspective. See how that works?

There is a fine line. We know who we are. We are not afraid to laugh at ourselves a little, but nowhere near abandoning the ship.

It’s a long season and this is a truly ridiculous league. The tables look upside down at the moment. At some point you need to trust in the math. Regress to the mean. Everything comes out in the wash. There are still 96 points there for the taking and we only need about 60 of them to win the league. We can lose another 13 games before really worrying. Trust, friends. We’ll be fine.