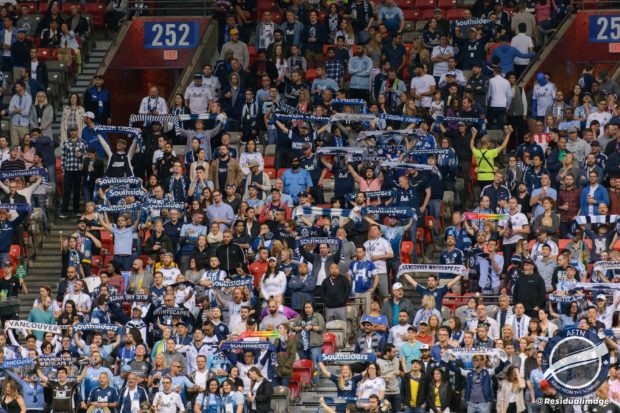 Soccer is jazz with a ball at your feet. It’s about improvisation and flair within constraints. It’s about creatively using what you’ve got, and responding to what’s happening. Seeing ahead and not getting stuck on what you’ve just done. You can neither rest on your laurels nor wallow in your self-pity. You simply need to make the next move, make a better choice, lift up someone else, or slot home your chance when it comes around.

It’s a game that can be equal parts cruel and redemptive. It’s like those winter days in Vancouver, where after weeks of rain and darkness, the clouds lift and you are offered a day of brilliant sunshine, snow from the mountaintops down to the sea, and a dose of endorphin fuelled amnesia so strong, it instantly wipes away weeks of pain. You can’t remember why you ever felt bad.

Last Wednesday I left BC Place with one of my Pigeon Casual mates, Duncan, who has seen thousands of matches over his lifetime in England, Europe, and North America. We left the raucous Southside concourse delirious with happiness after Reyna’s finish sealed the night, strode out into the warm summer air still singing “Victory”, and he turned to me and said “that was one of the top match experiences I’ve ever had. That is why you come, to see a thing like that. No one who was here tonight will get a better taste of what it’s like to be a supporter.”

The Southside was in magnificent voice. We even got a few rows dancing to “Whitecaps Nagila” which is a small miracle because Vancouverites are loathe to dance much in public. That swelling fierceness of “Victory” building and building through the last few minutes of the match, exploding with joy when Jake Nerwinski placed a sublime ball inch perfect into the nest of Reyna’s hair, carrying on through the end of the match, even as Jordan Harvey came over to add another notch to his banner.

That fierceness has been missing of late. We’ve been deflated and a little circumspect at all that has happened to our players lately. David Villa hushing us after his second gift wrapped penalty at BC Place almost had us silenced. But whatever Robbo said to those guys in the dressing room translated to the stands as well.

Jordan Harvey, our favourite, our legend, right in front of us, cushioning a volley into the net on a slim angle to tie the match. Reyna, the new boy, announcing his debut into a team that needs his finishing tenacity, his energy, his hunger, slotting the winner off a cross that Jake Nerwinski can tell his grandkids about.

You have to take the chances when they come, as Jordan Harvey and Yordy Reyna will tell you. With this club at the moment, with this season, with these years, a night like this is worth celebrating. Somehow we’re not the worst team in the league, but everything that can go wrong seems to have, and yet here we are sitting 10th in the league on points per game, chasing our Conference rivals with three games in hand. My goodness. Let’s enjoy it. Given this season, who knows what will happen next.