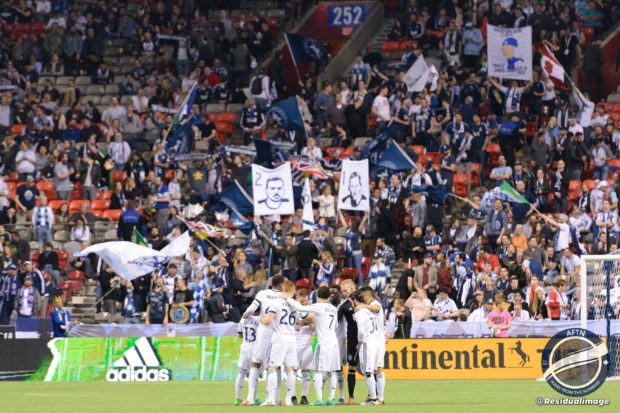 There is something powerful in the act of facing one another, acknowledging one another. One of my favourite chants is “Come on Vancouver, we’re together, supporting you tonight.” It’s slow and anthemic, sometimes dirgy, but its a lovely tune and the sentiment is exactly right. We are shoulder to shoulder in the Southside and the job of everyone there is to produce a unified noise towards the players. We are together. Supporting you. Making visual and auditory displays that express something.

So what lies at the heart of what are we expressing? A recent meme that slid around twitter this week had a quote from Bobby Robson:

“It’s the noise, the passion, the feeling of belonging, the pride in your city…falling in love.”

It is really about falling in love. Vancouver is a hard city to love sometimes, and the club hasn’t been easy to love for years now. But the players, those humans down on the pitch that we come to watch, those guys that pull on the shirts that represent us, that play for us: it’s easy to love them. Their pride and commitment is on display for everyone to see. They have nowhere to hide. Their mistakes are out in the open and their reward is in the roaring acknowledgment of the moments of brilliance. Moments they have trained for all their lives. Moments we have paid to witness.

It’s hard to describe the attachment I feel to our players. This season up in the Loft we’ve been trying to come up with songs for each of them so that as we watch and pay attention to them they know we see what they are doing. Because we spend half the match close to our keeper and defenders, they come in for special treatment.

David Ousted and Jordan Harvey have long been favourites of the Southsiders, and since Sheanon Williams has joined us, his steady play has got him a chant too. Tim Parker – “one ginger ninja!” – and Kendall Waston – “He clears with his head, and when he goes through you, you’re better off dead” – are easy to sing for too. Defenders elicit pride because they throw themselves into their work with fierce abandon and every so often, as Kendall Waston did on Friday against Seattle, they save us.

But the other reason that we’ve been trying to come up with player tributes is to knit the Southside and the players a little tighter together. For a number of years now after a match, the players commonly gathered at the centre circle, had a small team talk, barked at the referees, and then did a lap around three quarters of the ground. They turned towards the north end, walked around a little waved to their families and then out, one stopping by the Curva to do a Humba and signing a few autographs in the tunnel. They rarely made it as far as the Southsiders.

There was speculation for years about what that was all about. It felt like a snub but whether it was intentional or not, when the players turned their backs on us after a game, it always felt a bit deflating. Even if we had won, but especially when we lost, it felt like any small gesture was enough to remind us that we weren’t watching these players through glass and that they had heard us too, that our singing meant something to them. Jordan Harvey and David Ousted almost always made the trip across the whole Southside, high fiving and thanking us, but by the time they had got to the Southsiders, most people had left.

Since the Tigres match however, something has changed. Some dubbed it #TheSnubIsOver, but whatever it is, the past few games, players have started to turn the other way, towards us. After the LA win, something like nine players returned the love. That simple act has had an effect. People are staying in the section after the game, singing out their appreciation. Chanting for Fredy Montero after Friday’s win was glorious. I almost felt bad that Sheanon Williams didn’t also hear his song as he did the rounds. Very slowly and in very small numbers, people are starting to come early too to sing and wave flags during the warm up.

The bond that matters most in the Southside is the one between the supporters and the players. Of course it’s easier when we are winning, but it is perhaps more important when we are losing. When we show up early to sing and wave flags it says “we believe in you”, even as the stadium PA tries to drown us out. When we stay after the end it is a mark of appreciation to sing our guys off the pitch. Win or lose, we’re together. And when they return that gesture it’s a relationship, and that is what elicits the passion, the feeling of belonging, the pride and the love.

Come early, stay until the players have left, and remember why we’re all there in the first place. We’re turning a corner, and the players are too.