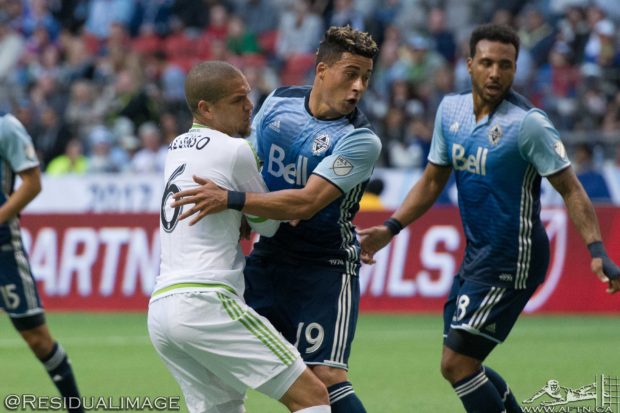 It’s that time of year again, as we reflect on Vancouver Whitecaps’ season past and ponder the performances of the players, asking should we KEEP, TRADE, OR RELEASE them.

We’ve kicked things off with a look at the Whitecaps Goalkeepers, Defenders, and Midfielders. So it’s time to turn the attention to the ‘Caps forwards.

Now I know what you’re thinking, and yes, we do in fact have some of those on the books.

It’s been another woeful years for the Whitecaps strikers and once again it’s not been from a lack of service. When you look at the top goalscorers for Vancouver this year, the top two (Pedro Morales and Christian Bolanos) are midfielders, with Kekuta Manneh being the only forward coming in the top five in third place. And he hasn’t played for months!

Vancouver have scored 41 goals in their 33 MLS matches so far this season, with 12 players getting on the scoresheet. The players listed in this feature today, you know, the ones you’re relying on to score goals, have a combined total of 11 of those 41. That’s a shocking 27%. Even factoring in the departed Octavio Rivero’s two goals and it takes it up to a not much better 32%.

When Carl Robinson made it his number one priority to sign a proven goalscorer, we didn’t think he’d have signed the Invisible Man. He’s great at ghosting in to the box unmarked mind you, but none of the midfielders can find him with a pass.

Robbo’s has targeted finding that proven goalscorer again this offseason. The third straight year that’s been the priority. There’s something seriously wrong there with the scouting, evaluation, and signing policy at the club in that case.

Of those forwards currently here, who do you bring back and who do you cut free? We take a look, and don’t forget to leave your own thoughts in the comments below.

Giles Barnes (RELEASE) – Barnes has been awful as a Whitecap. No goals in nine appearances but he does have an assist. Interestingly, in his whole career he’s not scored many goals away from Houston. That doesn’t really help us! His salary is eye-popping at a staggering $756,250. There’s no way the ‘Caps are paying that, so he’s probably down as a league DP as Mauro Rosales was when he came here. We believe Barnes’ contract is up the end of this season and the ‘Caps will have the option. It’s been said Robbo wants to build the squad around him. Let’s hope not. Cut our losses and let him go. He’s been a bust here and trying to trade him at that , or anywhere near that, salary would be fairly impossible.

Alphonso Davies (SELL! SELL! SELL!) – We jest. Well kind of. It’s just not going to be the same when 15-year-old Alphonso Davies is no more. He sounds so old and normal at 16! He’s still raw, but what’s been evident is he has no fear out there on the pitch. He just goes out, does his thing and enjoys himself. He’s already got his first first team goal under his belt in the CCL (only the one that qualified the ‘Caps for the knockout stages too), so big things will obviously be expected of him next season. How Robbo uses him will be interesting to watch. He can only protect him from so much hype when he’s actually performing on the pitch, but we can’t afford to burn him out. A split between MLS and USL should be on the cards, but the prospect of Davies and Kekuta Manneh on opposite wings is a very exciting and potentially devastating one.

Erik Hurtado (KEEP) – I know. I’m as surprised as you are! But he’s done enough down the stretch to merit sticking around. But as the third or fourth choice striker off the bench. He should not be a starter for a team with realistic playoff aspirations. It felt like he was going to go the whole year missing chance after chance. You wondered just how many mirrors he’d actually broken as he seemed cursed in front of goal. At $121,091, he’s a good value squad player with MLS experience and the ability to score. You’re not going to find much better for that price, but he’s nowhere near the answer to our regular goalscoring woes.

Kekuta Manneh (KEEP) – The Whitecaps 2015 playoff hopes ended when Manneh went down injured in the Western Conference semi-final second leg against Portland. Their 2016 season went the same way when he went down with an end of campaign injury in July. No team should be so reliant on one player to make them tick. His five goals this season still sees him third in the goalscoring charts. But all that said, he’s still so frustrating with his lack of consistency. If he can work on that and add a few more dimensions to his limited attacking skillset (run, run, run, shoot, can only get you so far), then he has “the world at his feet” to quote Andy O’Brien. You also worry now about how healthy he is and can he go a full season without picking up a major injury. As we mentioned above, the prospect of a Manneh/Davies wing attack should be frightening to opposition defences.

Blas Perez (RELEASE) – Perhaps the most polarizing Whitecaps signing in the MLS era. You were either on board with Robbo bringing in the Panamanian for what he brought to the attack, or you couldn’t get over his antics in Dallas and didn’t want him here. Whatever your viewpoint, there’s no getting away from the fact that he is a quality finisher in MLS, but he’s been wasted here in Vancouver, reduced to minimal game time. He’s made 21 appearances, mostly limited ones, and has certainly added a spark to the team when he’s come on. He’s also grabbed the goal of the season with his spectacular bicycle kick (one of two as a Whitecap in league play). But he’s only made five starts. The reasons as to why are debateable, especially in a team struggling for goals. Would he have made more if he wasn’t still playing internationally for his country? Was he a bit beat up? When he has started, he’s also looked poor, so maybe a super sub role is ideal for him at this stage of his career. Whatever it is, it’s not really worked out for him here and at his age and at $225,750 he won’t be coming back. Which probably means he’ll land somewhere and end up scoring against us down the line. You just know it. 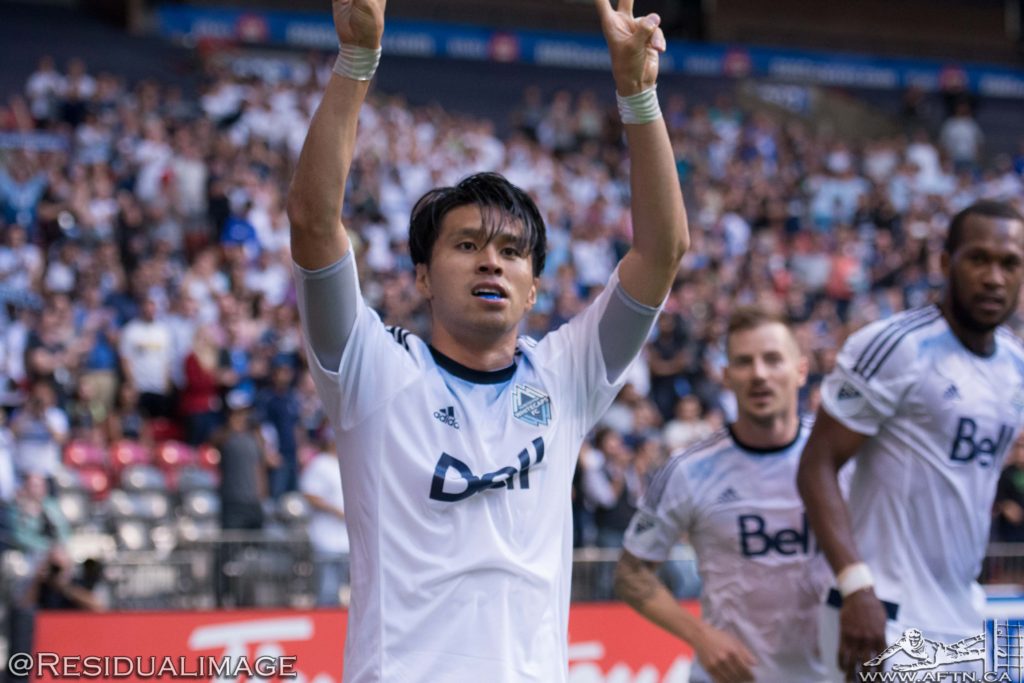 Masato Kudo (RELEASE) – Vancouver’s Japanese experiment didn’t go well. A lot of fanfare was made about Kudo coming over from the J League. There was interest from fans over there, media followed his progress, and it was said he could blaze the trail for other to come over. He’s been a flop. Harsh? Perhaps, considering his horror injury against Chicago in May that derailed his season, and looked even worse at the time of impact. But he’s looked out of sorts in a physical league. It was good to see him play without fear when he did return from his broken jaw (scary too!), but he doesn’t look cut out for a whole season of that. He also only has two league goals from his 17 appearances and 12 of those were starts. His finishing has looked dreadful on one on ones. He looks the kind of guys that can mop up loose balls in the six yard area but we need a hell of a lot more than that from a main striker, and especially one commanding a guaranteed $370,000 salary. I think Robbo’s going to keep him around for now and take a further look at him, but can he suddenly become the player we need? It’s a huge gamble to take on that salary and one I feel is not worth the risk. Cut him now.

Kudo was the final player we put up for discussion in our Twitter polls, and sadly for the Japanese striker, 51% of the 272 responders want to see the back of him, with a further 23% unsure and wanting to take another look at him before making their minds up.

Thanks to everyone who has voted so far in our "Keep, Trade, Release" polls. For our next one, what should #VWFC do with Masato Kudo?

It’s a tough decision to make, as he clearly is a talented striker, but that doesn’t mean that MLS is the right league for him. Here’s a selection of the comments in response to the poll.

@aftncanada I'm unsure what we have in him but if Robbo continues to insist in 4231 then I don't believe he would fit. #VWFC

@aftncanada Kudo didnt get a fair shake this year getting hurt, would be nice to see what that money can really bring though.

Kudo looks to be a poor fit for the physicality of MLS, and $300k is too much to buy him a second chance at it – RELEASE HIM. #VWFC https://t.co/3rMJzFoDSh

If you want to catch up on our previous “Keep, Trade or Release” picks, here are the links –

2015 – GOALKEEPERS AND DEFENDERS / MIDFIELDERS AND FORWARDS

2014 – GOALKEEPERS AND DEFENDERS / MIDFIELDERS AND FORWARDS