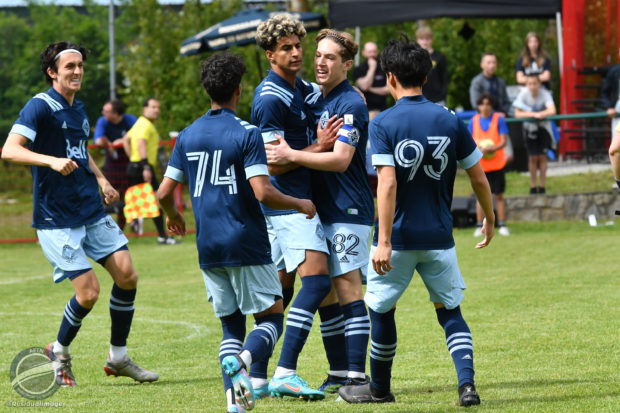 [For the basis of this round-up, we’ll be looking at matches played from Thursday May 26th to Wednesday June 1st]

With week two of the inaugural League1 BC season done and dusted, the men’s division see four of the seven teams remain unbeaten, with Vancouver Whitecaps picking up a six point haul and TSS Rovers grabbing a big away win, both thanks to hat-trick heroes.

Those two teams currently lead the way at the top of the standings, with a lot of football still to be played.

The action got underway in almost monsoon conditions in Langley as Varsity FC headed to take on Unity FC in their first ever L1BC match. 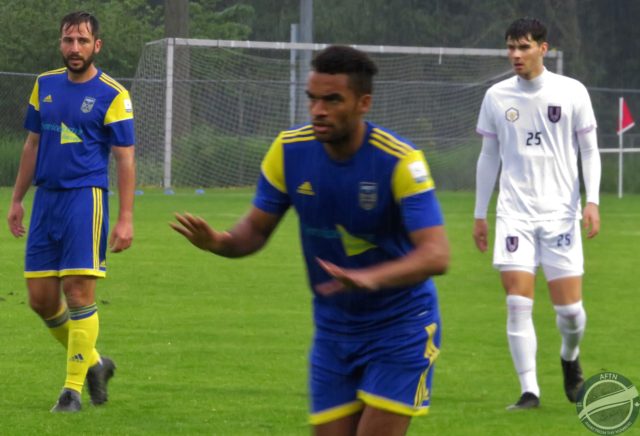 Unity were coming off a draw on opening weekend, but the bye week didn’t seem to cause Varsity any issues in hitting the wet ground running, and they controlled this game from start to finish.

Connor Mrazek wrote his name in the history books for this one, scoring Varsity’s first ever men’s goal in the 16th minute, firing home after the ball bounced around the box.

Despite having chances to add to their tally, like the women’s match that preceded it, Varsity had to wait till the closing minutes to seal the three points when Jordano Pinto sent a long ball forward in the 84th minute and Caleb Clarke got onto it, blew past the Unity defence, rounded the keeper and gave Varsity the 2-0 victory.

It was a fairly comfortable first outing for his new side, leaving Varsity FC head coach Mike Mosher relatively pleased with what will only be getting better as the weeks wear on.

“I didn’t think we started well the first 15 minutes, but then we really found our way,” Mosher told AFTN after the match. “The goal really settled us. Once we scored, we were ‘all right, now we’re good’. There were a couple of mistakes from them that we left unpunished unfortunately in the first half.

“We were pretty good defensively in the second half outside of giving away a few silly free kicks, but a relatively tight defence. Then we get the one opportunity there and bury the game.”

With the bulk of the Varsity squad coming from Mosher’s UBC Thunderbirds team, one thing that let that team down at times last college season was scoring. Victory Shumbusho was out with a long term injury and other key players went down injured.

Those players are now all back or very close, and there’s a couple of big additions like Mario Kovacevic, a former University of Toronto standout who played for Croatia SC this past VMSL season, and the huge addition to the Varsity frontline is former Thunderbird, and Whitecap, Caleb Clarke, who already showed his value to the team with a goal in the opener, and he could have had a couple more.

“In attack you’ve got Caleb, you’ve got Mario, who I felt was quite good today, and big Sebby [Dzikowski] who was unavailable today,” Mosher told us. “And then you have Vic. That was basically Vic’s second game back since September from a very bad injury. We’ll just slowly bleed him in over time.

“So there’s quite a bit of firepower there and then Nick Fussell is just coming back from injury and Tommy Gardner will be added in soon enough. So there’s a lot of goals there.”

There certainly looks to be and Varsity have to be one of the favourites to be in that championship game come August. But a couple of the other sides are already starting to find their feet and play some nice football as well, and it was a good second week for Vancouver Whitecaps and TSS Rovers.

The Whitecaps played two matches in a four day spell and came away with a six point haul and two clean sheets.

They kicked things off with a 3-0 win over Altitude FC at a sold-out Kinsmen Park in North Vancouver on Saturday afternoon. 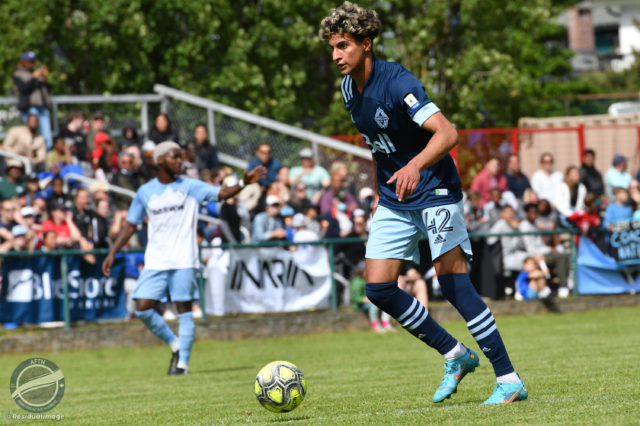 Gurman Sangha was the hero, hitting a hat-trick for the ‘Caps, which amazingly didn’t even see him get a L1BC Team of the Week nod.

In a fast paced game, Sangha fired the Whitecaps ahead two minutes in, making room for himself in the box to beat Luca Ortu low in the home goal. It was 2-0 in the 11th minute when Sangha finished off an Eric Kim cross, but after being caught by that fast start, Altitude started to come back into the match and if Mladen Ljumovic’s first half effort had nestled in the bottom corner instead crashing off the post and out, things could have been different.

The teams went toe to toe in the second half without adding to the scoring, but the ‘Caps wrapped things up seven minutes from time when Sangha was brought down in the box, picked himself up, and buried the penalty to secure a 3-0 victory and three points. 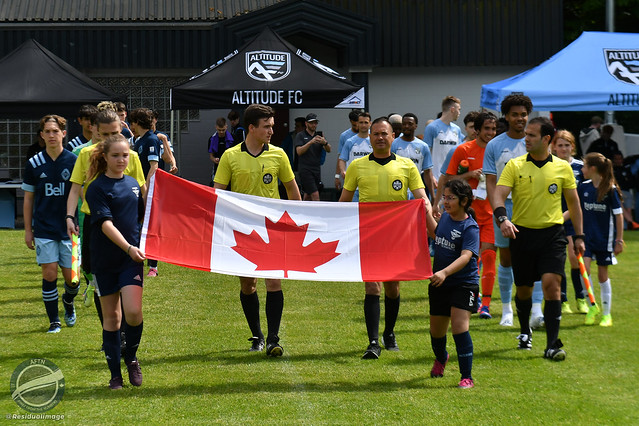 Whitecaps head coach Rich Fagan was naturally a delighted man after that one, especially with his team’s fast start, which was the gameplan to match what they knew Altitude would bring.

“We felt with this being their first home game, they would come out flying so we said it’s not good enough for us to come out flying, you have to come out twice as much all over the pitch, every position,” Fagan told AFTN after the match. “So it was definitely what we spoke about before the game.”

The man of the moment was Sangha, back at the Whitecaps after four years in college with Memphis and Portland, and Fagan feels this league is now the perfect opportunity for the forward to show he has a place within the club at the pro level.

“The kind of missing piece for the last four, five seasons has probably been WFC2,” Fagan told us. “This is a proving ground for him. If you’re banging in three goals in League1, you’re going to turn the heads and who can argue? I would hope if he does well here, he’ll get the opportunity with WFC2 at some point.”

The Whitecaps were back in action on Wednesday night at Ken Woods Field, coming away with a 2-0 win over Unity FC thanks to a stunning long range goal from Tomas Pena 10 minutes in and an 89th minute penalty from Joven Mann.

Unity had pushed hard to try and find an equaliser, but are left still looking for their first win of the season, three games in.

The Whitecaps now sit top of the table on seven points, but having played a game more than second placed side TSS Rovers.

The Rovers were the league leaders after the weekend action on goal difference after a superb 4-0 victory at Rivers FC on Sunday afternoon.

Erik Edwardson hit a hat-trick for TSS in this one, scoring in the 16th and 42nd minutes to give the Rovers a two goal lead at the half, then slotting home a penalty in the 57th minute. Daniel Davidson rounded off a very good afternoon for the visitors, adding their fourth 16 minutes from time.