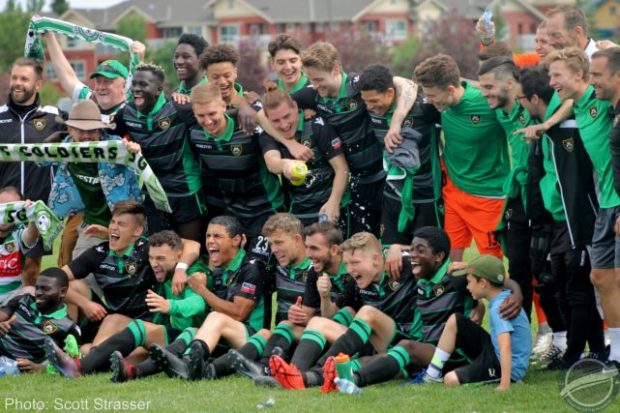 It’s new faces at the helm but the same success for the boys in green.

For the third time in four years, Calgary’s Foothills FC U23 have finished the regular season atop the Northwest division standings of USL2, after sweeping the Victoria Highlanders at home on July 12 and 14.

In back-to-back games at Mount Royal University to close out their regular season schedule, Foothills overcame Victoria twice (3-2 and 3-0) to book their spot in the USL2 Western Conference championship tournament, which kicks off this weekend.

The sweep over the Vancouver Islanders ensured Foothills ended the regular season with a 9-3-2 record, four points above second-place Seattle Sounders U23.

“I’m really happy and it’s awesome to go back-to-back,” said Foothills captain Tofa Fakunle. “This is my second [division title] in a row and my third in four years. To win the northwest division in USL2 – it’s a tough league.” 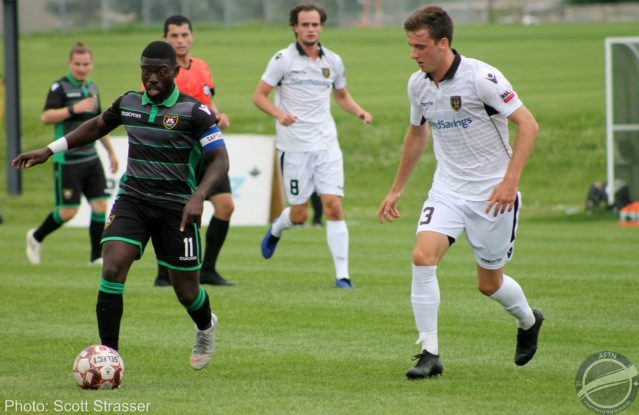 Captain Tofa Fakunle said this year’s division title – his third for Foothills – has been the sweetest of his PDL/USL2 career.

“I’ll be honest with you – this one is special to me, because I don’t know if people thought we could do it,” he said. “I think a lot of people said, ‘Oh, everyone is gone.’

“Yeah, they were good players who have moved on, and congrats to them, but there are also good players coming in here who also want to move on. To me, this one was the toughest, the sweetest, and I’m just so happy to do it.”

Playing at home for the first time in more than a month, Foothills opened the weekend series on Friday night with a tightly fought 3-2 victory, with goals coming from Aribim Pepple and a brace from scoring-leader Willy Akio. 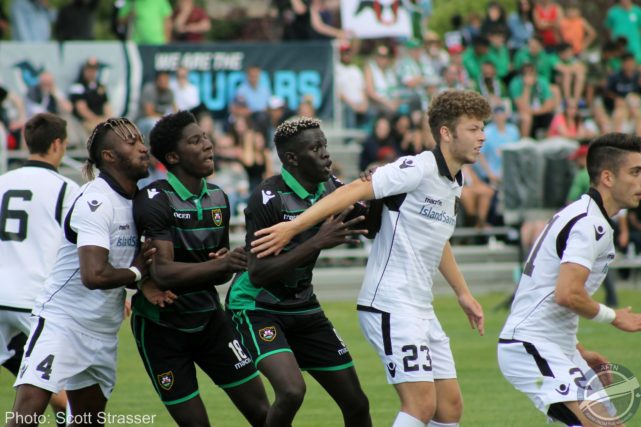 16-year-old Aribim Pepple (centre, left) and Willy Akio (centre, right) accounted for five of Foothills’ six goals against the Highlanders over the weekend.

The result in the penultimate match made for an interesting situation in the return fixture two days later – the Highlanders were eliminated from playoff contention, while Foothills still needed at least a point to secure the division title.

But despite having little to play for, Highlanders head coach Thomas Niendorf said he and his players still aimed to end their season on a high.

“You play every game in the league to win,” he said. “We wanted, of course, to have a positive ending for ourselves this season. That didn’t have too much to do with spoiling the party for Foothills. It was more about us just having a good conclusion to the season.”

Victoria’s task was made difficult, though, with the absence of many key players. According to Niendorf, four players from the Highlanders’ roster are training with clubs in Germany at the moment, while two of the players from the University of British Columbia are currently at a pre-season tournament in China with the Thunderbirds.

Those absentees, coupled with an injured player and a suspended player from Friday, meant there were just two substitutes on Victoria’s bench on Sunday.

Despite the low numbers, the Highlanders started on the front foot in Sunday’s game. The visitors looked comfortable in possession for the opening 15 minutes and generated a few positive surges forward.

“We clearly made the statement to everyone that we wanted to play and find approaches to penetrate and create opportunities,” said Niendorf.

“We kept good possession and built up our play into the attacking third, but we didn’t get enough clinical situations to capitalize on it.” 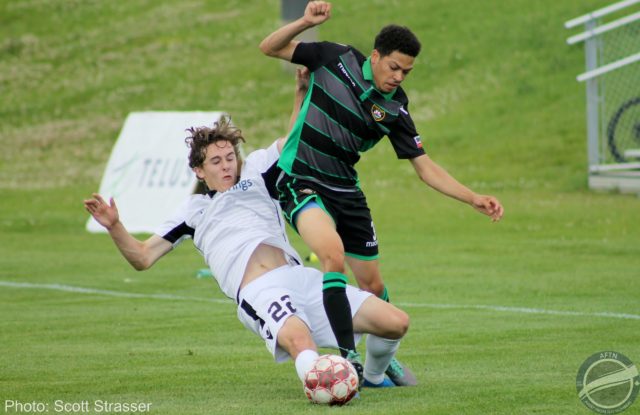 The visitors’ positive start was deflated when 16-year-old Pepple opened the scoring for Foothills on 20 minutes. The USL2 rookie latched onto a through-pass from Fakunle that sprung the Highlanders’ offside trap, before confidently slotting the ball past Highlanders goalkeeper Simon Norgrove into the bottom corner.

The goal continued an incredible run of form for Pepple, who has scored in Foothills’ final four games.

“Aribim is someone I’ve said all season is going to be special,” said Hapgood. “I’ve even reached out to the USL that they need to do their homework and praise him up a little bit, because the kid is 16 years old, and when he’s on, he’s fantastic.

“He has a great career ahead of him. We’re going to do the best we can to make sure his career is good. All I want him to do right now is just enjoy his football, keep scoring goals and see where it takes him.”

After taking the lead, the momentum swung in favour of Foothills, who controlled the pace and tempo for the remainder of the first half.

The home team’s positive form continued after the restart, and they were rewarded with a goal from Fakunle in the 52nd minute. Norgrove’s mis-clearance only reached as far as Foothills defender Blake Fenton, who played the ball inside to Fakunle. The former UNBC Timberwolves player carried the ball towards the top of the box before firing a left-footed shot into the bottom right corner. 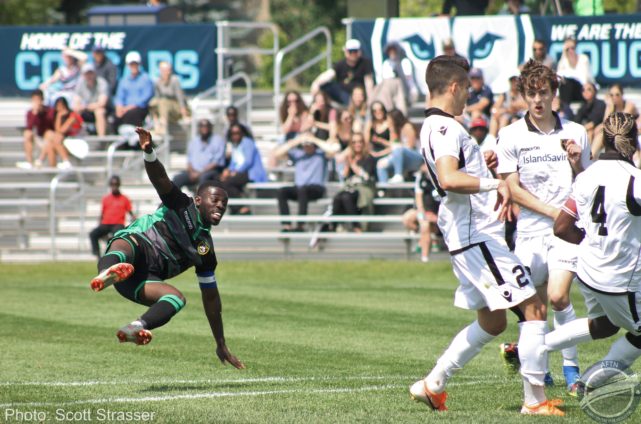 Fakunle falls to ground after firing in Foothills’ second goal of the game on Sunday.

It was the kind of situation he had been preparing for.

“I’ve been working on my left foot,” Fakunle said. “It’s something I prided myself to work on in the offseason, and I love shooting with my left foot now. I just tucked it in the corner.”

Less than 10 minutes later, Foothills rounded out the scoring with Akio’s 10th goal of the 2019 season. The Calgarian placed a shot into the far corner after another Highlanders turnover.

Hapgood said it was great to have all four of his attacking quartet – Akio Fakunle, Pepple and Corey Bent – on the pitch together. The four have accounted for a remarkable 23 of Foothills’ 25 goals this season.

“They’re so lethal and dynamic,” Hapgood said. “They’re scoring goals, sharing goals and we just look great going forward right now. Our momentum is good – we have four wins in a row – and hopefully we can carry that into the [playoffs].

With the ultimate goal of defending last year’s PDL championship, Foothills will open their post-season run on July 20 with an away visit to the Ventura County Fusion, in California. 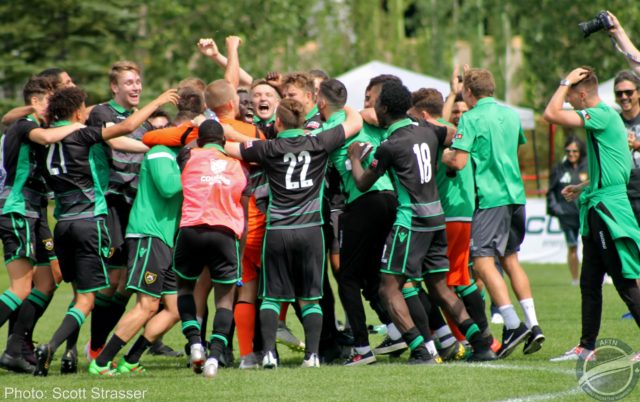