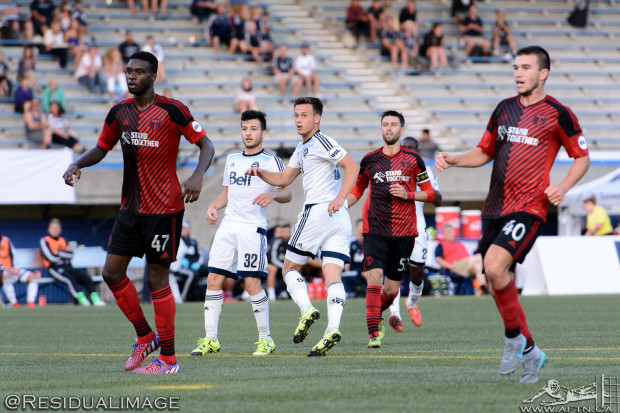 Vancouver Whitecaps head to Portland this weekend looking for double joy against their Cascadian rivals.

The ‘Caps face the Timbers in MLS action on Saturday night, with WFC2 taking on T2 on Sunday night in the USL.

Both matches will be huge tests for the ‘Caps. Getting anything from either game will be seen as a positive return, but both Carl Robinson and Alan Koch are confident that their teams can leave Oregon with six points and two crucial wins in their respective playoff pushes.

“We go to Portland now on Sunday, and that’ll be a very place to play,” Koch told reporters after Wednesday’s 2-2 draw with Colorado Springs Switchbacks. “But we’re a better team now than the last time we went on the road. The goal going forward there is to get three points and it will be going through the last nine games.

Looking at WFC2’s remaining schedule, they’ve got four home games and five away trips to close out the season. Six of those matches come against teams below them in the Western Conference, so hopes are high that they can continue their good form of late and make a concerted late push for the postseason.

Continuing to get points, and wins, at home will be important and their final three games of the campaign are all in Vancouver.

They’ve only lost once at Thunderbird Stadium in their ten games there, winning five and drawing four. However, it’s been a completely different story on the road and their ability to turn that around will be key in whether they clinch a playoff place or not come the end of September.

WFC2 have managed to take just four points from their nine away games in their inaugural USL season and have been kept off the scoresheet in five of those. They’ve managed just one win and that was a 3-0 trouncing of Austin Aztex in their second match of the campaign.

With the quirks of the USL schedule, the next six games are likely to be pivotal to the ‘Caps playoff dreams. Five of those games are on the road and three of them are Cascadian derbies.

Tough, tough, tough. But if the ‘Caps can get through that horrendous period in good shape, then the postseason will be within reach.

So just what is behind the ‘Caps very different set of results and performances home and away?

“Probably youth, to be honest,” Koch told us. “Playing at home is comfortable. Playing in front of your own fans, sleeping in your own bed. It’s a lot easier to do that as a professional footballer than go on the road and sleep in a hotel and fly somewhere and play in front of a hostile crowd and that type of environment.

“It’s part of the learning process. We’ve gone on the road and got two results, at two different stages of the season. We’d like to now, in the final stretch, pick up some points on the road. That will show if we’ve truly grown as we’ve progressed throughout the season.”

It certainly will be a great measuring stick for the team’s growth. They’ve been looking better and better in recent weeks, with Koch going with a more settled line-up and we’ve seen some excellent understandings build up as a result.

Spanish winger Victor Blasco has been in excellent form and has linked up well with both Billy Schuler and Marco Bustos in recent matches. Blasco has three goals and an assist in the last three games, with Schuler setting up all of his goals. Bustos has also looked good alongside Andre Lewis.

Things are starting to look up and turning the corner on the road against T2, will be the next step. Not to mention winning a Cascadia derby is always nice.

“We’re excited to go to Portland,” Koch added. “Of course, there’s the rivalry. Having beaten them the last two times here they’ll obviously try to pull one on us, but we’ll be ready. We’re heading in the right direction and hopefully get some points on the road.”

The WFC2 players will head down to Oregon on Saturday, taking in the MLS game at Piggy Park that night, and Koch is likely to find his squad boosted by some first team faces.

Depending on how the MLS game plays out, we’d expect to see Robert Earnshaw, Kianz Froese and Erik Hurtado get some minutes for the USL side on Sunday. Maybe some others like Deybi Flores and Diego Rodriguez as well.

Important competitive minutes for those guys, with such a busy schedule coming up, and hopefully a big boost to WFC2’s chances of taking something from the game with the added strength. Just as long as it doesn’t upset the chemistry the current core USL group has now established.

A six point weekend in Portland? Tough, but it would be massive for both the MLS and the USL teams in their push for the playoffs if they managed it.